Aguadito de Pollo is one of our favourite hearty and healthy Peruvian soups to cook at home.

Our homemade Peruvian Chicken Soup recipe is quick and easy to make, ready to serve in under 1 hour!

Enjoy Peruvian Soup as a wholesome lunch, with a salad for dinner or as a trusty hangover cure.

What Is Aguadito de Pollo?

Aguadito de Pollo, also referred to as Aguadito, is a traditional chicken soup in Peruvian cuisine consisting of chicken, cilantro and fresh vegetables.

The broth typically has a vibrant green colour due to the generous amount of cilantro incorporated in the soup.

In Peru,Aguadito de Pollo is often used as a hangover cure and is considered one of the most popular soups in the world.

Travel to Peru by Making Aguadito de Pollo at Home

In Peru, I’ve slurped through steaming bowls of traditionalAguadito de Pollo at restaurants in Lima, The Sacred Valley, Cuzco and Puno.

After enjoying your first few sips, you’ll realize why a steaming bowl of traditionalAguadito de Pollo is a must-try when visiting Peru!

Where To Eat Peruvian Chicken Soup

If you live in a large city in Canada or America you’ll likely have access to a local Peruvian restaurant that serves an authenticAguadito de Pollo.

Haven’t traveled to Peru before? It may be helpful to first sample Peruvian Chicken Soup at a local restaurant to better understand how the dish is served. You’ll get an idea for the desired spiciness of the broth, intensity of Aji Amarillo Paste flavour and ideal proportion of fresh vegetables to liquid.

You May Also Enjoy These Soup Recipes…

After traveling to Peru I was excited to introduce my family to a new soup recipe. I knew my parents would enjoyAguadito de Pollo because they love soups featuring fresh vegetables and are big fans of roast chicken.

We love to serve Peruvian Chicken Soup in the Spring when fresh local vegetables like peas, carrots, sweet bell peppers and potatoes are available at our local farmers market.

Nearly 50% of the people in the world get over 50% of their daily calories from rice. If eating brown rice featuring nutritious bran you’ll enjoy health benefits like cancer risk reduction and diabetes control.

Pears are rich in essential antioxidants, plant compounds, and dietary fibre. They pack all of these nutrients in a fat free, cholesterol free, 100 calorie package.

What To Serve with Peruvian Chicken Soup

There’s nothing more comforting on a cold day then cozying up to a bowl of soup.

We most often serveAguadito de Pollo as a hearty lunch. If you’re hosting a large dinner party you might want to serve Peruvian Chicken Soup as a small appetizer before serving meaty mains.

If you’re hosting a Peruvian or Latin American dinner party you may want to serve a buffet of dishes including: 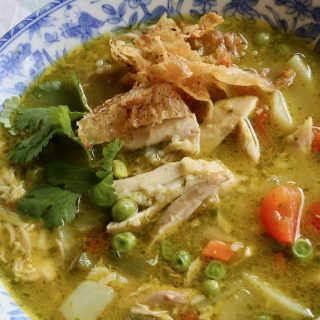