Pralines and Cream Ice Cream is our favourite homemade frozen dessert to scoop when a craving for pecans hits.

The popular flavour was originally invented by the founders of Baskin Robbins. Our homemade copycat recipe is quick and easy to make using an Ice Cream & Gelato Maker.

Enjoy as a cool scoop on a hot day or serve as a special dessert like an ice cream sundae, ice cream sandwich or ice cream cake!

What Is Pralines and Cream Ice Cream?

Pralines and Cream Ice Cream is one of the world’s most famous ice cream flavours, invented by the founders of Baskin Robbins.

Following a trip to New Orleans, Irv Robbins, and his wife Irma, were snacking on souvenir pralines at home when culinary inspiration hit. They rushed into the kitchen, pulled a tub of vanilla ice cream out of the freezer, tossed in chopped pralines and added a caramel ribbon. Pralines ‘n Cream was born!

Originally available in 1970 as a Flavour of the Month, this new ice cream flavour was such a success, it caused an uproar across America when stores quickly ran out.

With franchise locations running out of the new flavour fast, Baskin Robbins started receiving pleas and petitions from ice cream lovers begging for more Pralines n Cream Ice Cream. Dear Abby’s famous advice column in the national newspaper even joined in, begging for more! Students at UC Santa Barbara even staged a sit-in to bring the popular new flavour back. In the end, Baskin Robbins made a special production run to give fans what they wanted, and the flavour has been a favourite ever since.

It’s funny as my sister and I never knew what pralines were when we were kids. We just understood that Pralines n Cream Ice Cream featured a creamy vanilla ice cream, thick caramel sauce and crunchy nuts.

It wasn’t until I visited Savannah and Louisiana as a food writer that I came to fully appreciate the sweet Southern staple. Pralines are popular confection that resemble fudge and contain nuts (usually almonds, pecans or hazelnuts), sugar and cream.

Many North American ice cream shops sell Praline Ice Cream and due to Baskin Robbins global success it can be enjoyed around the world, from Korea to Switzerland and Egypt!

If it’s your first time making homemade Pralines and Cream Ice Cream we suggest reading our step by step recipe from top to bottom. Familiarize yourself with each step before you start cooking in the kitchen.

If you’re an ice cream traditionalist you’ll likely want to lick our Pralines and Cream Ice Cream off a cone or scoop out of a bowl all on its own.

You can also scoop homemade ice cream over muffins, cupcakes, pancakes and more!

Once you’ve mixed the freshly churned vanilla ice cream base with chopped pralines and caramel sauce store it in the freezer overnight to harden so you can scoop it easily.

Our homemade Pralines n Cream Ice Cream can be stored in the freezer for up to a month. But, I really doubt it will last much longer than a few days!

You May Also Enjoy These Dessert Recipes…

How To Make Homemade Pralines and Cream Ice Cream 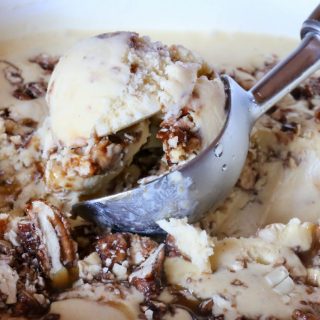