Maple Black Walnut Ice Cream is our favourite frozen dessert to scoop when a craving for nuts hits.

Our quick & easy recipe is made using an Ice Cream & Gelato Maker.

Enjoy as a cool scoop on a hot day or serve as a special dessert like an ice cream sundae with fresh fruit, nuts and dark chocolate.

Since our family is Canadian there is no wonder we’re huge fans of maple flavoured ice cream. We love traveling to Quebec, especially during maple season in the Spring to taste freshly tapped syrup on local farms from Charlevoix to Mont Tremblant.

The affordable ice cream maker typically sells for under $100 dollars and includes a main base with on/off switch, frozen bowl, paddle attachment and lid. The box also includes instructions on how to use the ice cream maker and a few easy recipes to get you started.

We suggest using maple syrup in the ice cream base but you could also get creative and use maple butter or even slice in chunks of maple fudge.

We have used roasted walnuts in this recipe but you could also add candied walnuts or swirls of walnut butter.

If it’s your first time making homemade Maple Walnut Ice Cream we suggest reading our step by step recipe from top to bottom. Familiarize yourself with each step before you start cooking in the kitchen.

What To Serve With Black Walnut Ice Cream

If you’re an ice cream traditionalist you’ll likely want to lick our Black Walnut Ice Cream off a cone or scoop out of a bowl all on its own.

Once you’ve mixed the freshly churned soft ice cream base with maple syrup and chopped walnuts store it in the freezer overnight to harden so you can scoop it easily.

Our homemade Black Walnut Ice Cream can be stored in the freezer for up to a month. But, I really doubt it will last much longer than a few days! 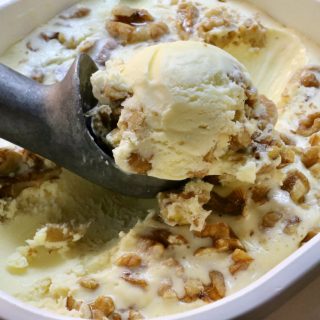