Enjoy as a cool scoop on a hot summer day or serve as a special dessert like an ice cream sundae with fresh berries, wafer cookies and dark chocolate.

Since everyone in my family is an Afternoon Tea lover with a penchant for hot cups of loose leaf I created my own homemade earl grey ice cream recipe.

This easy gourmet ice cream recipe features two special ingredients that we suggest you purchase at a premium. Quality over quantity when it comes to flavouring homemade ice cream!

You can use a classic Twinings Earl Grey and simply snip the tea bags with scissors and add the leaves to the simmering pot of cream. The best option is purchasing high quality loose leaf Earl Grey as the leaves are larger, offering a more profound flavour when steeped in warm cream.

If it’s your first time making homemade Earl Grey Ice Cream we suggest reading our step by step recipe from top to bottom. Familiarize yourself with each step before you start cooking in the kitchen.

What To Serve With Earl Grey Ice Cream

If you’re an ice cream traditionalist you’ll likely want to lick our Earl Grey Ice Cream off a cone or scoop out of a bowl all on its own.

Once you’ve mixed the freshly churned soft Earl Grey ice cream base with blueberry jam store it in the freezer overnight to harden so you can scoop it easily.

Our homemade Blueberry Cream Cheese Earl Grey Tea Ice Cream can be stored in the freezer for up to a month. But, I really doubt it will last much longer than a few days! 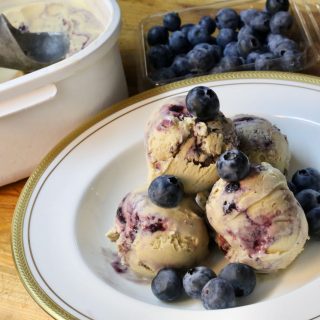