Java Chip Ice Cream is our favourite frozen dessert to scoop when a craving for coffee and chocolate hits.

Our quick & easy recipe is made using an Ice Cream Maker and Nespresso Coffee Maker.

Enjoy as a cool scoop on a hot day or serve as a special dessert like an ice cream sundae with fresh fruit, nuts and cookies.

My family loves coffee and chocolate so I wanted to create a high quality creamy ice cream that combined the two luxurious ingredients.

I used a Nespresso maker to make fresh espresso coffee that flavours the ice cream base. Chocolate Chips are then folded into the churned ice cream before freezing.

This easy gourmet ice cream recipe features two special ingredients that we suggest you purchase at a premium. Quality over quantity when it comes to flavouring homemade ice cream!

You can give Java Chip Ice Cream its unique coffee flavour in a few ways. We’ve used a Nespresso Machine to make 3-4 shots of espresso. If you want a stronger coffee flavour you can also add espresso powder to the ice cream base while it’s warming over the stove. Or add a few drops of high quality coffee extract.

If it’s your first time making homemade Espresso Java Chip Ice Cream we suggest reading our step by step recipe from top to bottom. Familiarize yourself with each step before you start cooking in the kitchen.

What To Serve With Espresso Java Chip Ice Cream

If you’re an ice cream traditionalist you’ll likely want to lick our Java Chip Ice Cream off a cone or scoop out of a bowl all on its own.

Once you’ve mixed the freshly churned soft Java Chip Ice Cream base with chocolate chips store it in the freezer overnight to harden so you can scoop it easily.

Our homemade Espresso Coffee Chocolate Chip Ice Cream can be stored in the freezer for up to a month. But, I really doubt it will last much longer than a few days! 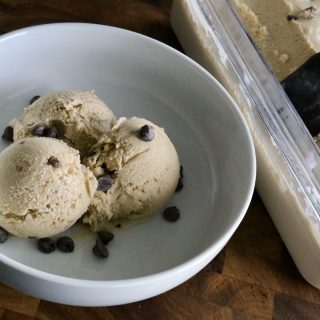