Popcorn Ice Cream is our favourite dessert to scoop and serve for film lovers on movie night.

Our quick & easy recipe is made using an Air Popper and Ice Cream & Gelato Maker.

Enjoy as a cool scoop on a hot summer day or serve as a special dessert like an ice cream sundae with fresh fruit, nuts and dark chocolate.

Since everyone in my family is a film lover with a penchant for buttery movie theatre popcorn I created my own homemade popcorn ice cream recipe.

Growing up as a kid my father always made homemade popcorn in an air popper when my parents hosted movie night. He’d add corn kernels to the machine and moments later freshly popped crunchy white clouds were being tossed in melted butter.

We never used microwave popcorn as we didn’t like the added chemicals, fake butter flavour and outrageous amount of salt. So we don’t suggest using the commercial store bought bags in this popcorn ice cream recipe.

This easy ice cream recipe features two kinds of popcorn: buttered popcorn flavours the ice cream base and caramel corn pieces are mixed into the churned cream and a decorative topping.

The ice cream mix in and topping is caramel corn but our favourite brand is Poppycock as it allows you to incorporate a few nuts into the flavour profile as well.

If it’s your first time making homemade Popcorn Ice Cream we suggest reading our step by step recipe from top to bottom. Familiarize yourself with each step before you start cooking in the kitchen.

What To Serve With Popcorn Ice Cream

If you’re an ice cream traditionalist you’ll likely want to lick our Popcorn Ice Cream off a cone or scoop out of a bowl all on its own.

Once you’ve mixed the freshly churned soft popcorn ice cream base with caramel corn and caramel sauce store it in the freezer overnight to harden so you can scoop it easily.

Our homemade Caramel Popcorn Ice Cream can be stored in the freezer for up to a month. But, I really doubt it will last much longer than a few days! 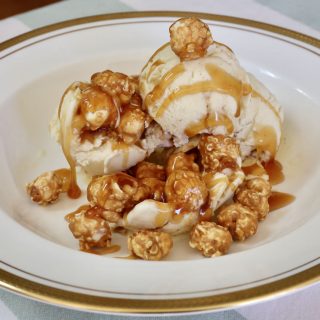