Maulwurfkuchen is a traditional German cake made with chocolate, bananas and whipped cream. It gets its name from the simple fact that it looks like a molehill.

In Germany, Mole Cake is often prepared at home using a cake mix that can be purchased in the baking aisle of local grocery stores.

German Mole Cake is often served as a birthday cake. It offers kids a delicious celebratory slice featuring the flavours of decadent chocolate, sweet banana and whipped cream that is stabilized with gelatin. Chill in the fridge until ready to slice.

Mole Cake is popular in Germany as well as neighbouring countries throughout Eastern Europe.

In Germany the cake is called Maulwurfkuchen, though bakeries in the Czech Republic refer to the recipe as Krtkuv Dort.

Travel to Germany by Baking Mole Cake at Home

For over ten years, I’ve been on the hunt for the best Maulwurfkuchen recipe. I’ve embarked on culinary adventures at German restaurants and bakeries throughout Western Europe in Holland, Belgium, Luxembourg, France, Switzerland and Austria.

The first time I tasted Maulwurfkuchen was soon after I arrived in Dusseldorf. I had just arrived to the city from Leipzig. After checking into my hotel it was already after the lunch hour and still hadn’t had anything more than a cup of coffee all day.

I headed straight to the city’s most famous cake shop, a cute cafe overlooking the city’s main square that features a massive display case with over 100 classic German cakes sold by the slice.

I ordered an ice cream sundae as well as a massive slice of Maulwurfkuchen, which tied me over until a beer soaked dinner later that evening.

After you’ve enjoyed your first taste, you’ll realize why Mole Cake is a must-try when visiting Germany!

Where To Eat German Mole Cake

If you live in a large city in Canada or America you’ll likely have access to a local German restaurant or European bakery that sells traditional Maulwurfkuchen.

Haven’t traveled to Germany before? It may be helpful to first sample an authentic Mole Cake recipe at a local restaurant or bakery to better understand how the dessert is served. You’ll get an understanding for the perfect fruit to cake to whipping cream ratio and ideal size to cut each slice.

We also suggest visiting Starsky Foods in Mississauga as they have a big bakery and are the largest European supermarket in the GTA.

When we were kids my mom would spend hours meticulously decorating birthday cakes for my sister and I. She’d visit a local kitchen supply store and purchase cake pans for my sister and I that featured our favourite heroes of the moment, from My Little Pony to Cookie Monster.

She’d typically bake a chocolate cake sponge and then use various icing tips to pipe colour icings onto the cake. A real culinary masterpiece!

After eating my way through Germany and Eastern Europe I thought it would be fun to celebrate Father’s Day by preparing a cake my family had never tasted.

I knew my dad would love this cake because he’s a fan of chocolate cake, bananas and whipped cream.

He was really impressed by how large the Maulwurfkuchen appeared after being assembled on the cake stand.

We suggest serving Mole Cake with a scoop of ice cream like chocolate, vanilla or banana.

This homemade German Mole Cake recipe is quick and easy to make at home. We’ve included a few baking tips to get you started:

What To Serve with Traditional Maulwurfkuchen

Maulwurfkuchen is a popular German chocolate and cream cake.

We typically like to serve Mole Cake at dessert with coffee, tea and a selection of ice creams.

If you’re hosting a German or Eastern European themed dinner party you might like to serve this Mole Cake recipe as a dessert with:

You May Also Enjoy These Dessert Recipes… 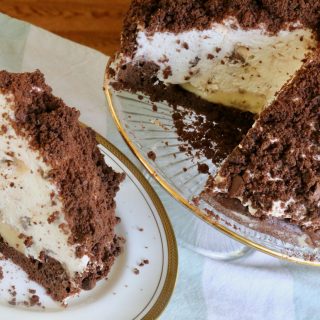