Looking to learn how to make potato fritters?

Our easy homemade French Mashed Potato Fritters are crispy on the outside and soft and tender on the inside. The ultimate decadance for potato lovers or anyone who loves crispy deep fried treats!

This decadent vegetarian Potato Fritters recipe can be enjoyed as a snack dipped in chive sour cream, or more traditionally like Pommes Dauphine as a side dish to roast meats and jus gravy.

What Are Mashed Potato Fritters?

Crispy Mashed Potato Fritters are known as Pommes Dauphine in France. The dish is named after the Dauphine, the title given to the wife of the Dauphin, or heir to the French throne. So yes, they are fancy!

Traditional Potato Fritters are crisp potato puffs made by mixing mashed potatoes with savoury choux pastry, forming the mixture into quenelle shapes, and then deep-frying.

Potato Fritters in France are typically served as a side dish alongside roasted red meats. We like to serve them as a decadent snack, enjoyed with chive sour cream for dipping.

Travel to France by Making Crispy Potato Fritters at Home

What I love most about traveling to France is the opportunity to sample unique recipes from each region. The dishes and pastries in Paris and Versailles are unique to what you might find on restaurant in Normandy, Chateauneuf de Pape, Provence, Epernay, Reims, Dijon and Annecy.

For hundreds of years French cuisine has been considered the fanciest of foods. If you’re a pastry fan, there’s no better country in Europe to eat your way through. You can eat your way through flaky croissants in Paris, cherry clafoutis in the South of France and apple and pear adorned tartlets in Normandy.

Once back home from a French holiday you’ll have a newfound appreciation for the regional and seasonal flavours of France and can impress friends and family by making this decadent crispy potato fritters recipe!

Where To Eat Pommes Dauphine

If you live in a large city in Canada or America you’ll likely have access to a local French restaurant that serves Mashed Potato Fritters. You’ll typically find them as a side dish served alongside roasted meat and slathered in gravy or jus. We like to think they are France’s fancy take on British Yorkshire pudding.

I love cooking and baking traditional French recipe at home.

It’s during the Thanksgiving and Christmas holidays that my family most often makes mashed potatoes. They’re a classic side dish to roast beef or turkey.

My sister is famously obsessed with mashed potatoes and is always put in charge of preparing a large pot during the holidays that we like to flavour with creamy French Boursin Cheese.

Our take on classic Pommes Dauphine was a huge hit with my family, who have a penchant for crispy deep fried treats and creamy mashed potatoes. When combined they’re a match made in heaven!

We enjoyed the fritters as a snack dipped in chive sour cream, washed down with a cool glass of Chablis or Chardonnay.

They’re now our favourite Boxing Day snack to make the day after indulging in an epic Christmas roast turkey feast!

This fritter recipe is easy to make at home and a great way to use up mashed potato leftovers! Here are some tips to ensure your guests are begging you for the recipe!

Once you’ve made these easy Potato Fritters you’ll appreciate how versatile they are!

Our recipe suggests serving them as a snack dipped in chive sour cream.

They are most commonly served in France as a side dish as an accompaniment to roast meats. Doused in gravy they taste similar to Yorkshire pudding.

We also like to serve the fritters at a French inspired brunch, paired with an omelette that is covered in hollandaise.

If you’re hosting a French themed dinner party you may also like to make these popular recipes:

You May Also Enjoy These Potato Recipes… 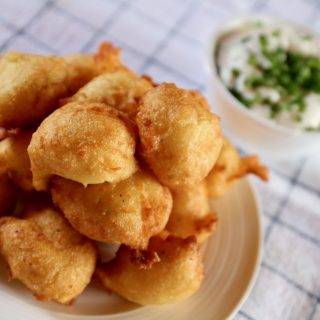