Looking for the most deliciously decadent Toblerone Brownies recipe?

Our easy Toblerone Brownies are the perfect sweet treat for Swiss chocolate lovers!

You can make this Toblerone Brownie recipe any day of the year as a sweet snack or dessert. We particularly love to make them for birthdays and special celebrations like Valentine’s Day and Christmas.

What Are Toblerone Brownies?

Brownies come in a variety of forms and may be either fudgy or cakey, depending on their density. Brownies often, but not always, have a glossy “skin” on their upper crust.

They may also include nuts, frosting, cream cheese, chocolate chips, or other ingredients. A variation made with brown sugar and vanilla rather than chocolate in the batter is called a blond brownie or blondie.

The brownie was developed in the United States at the end of the 19th century and popularized there during the first half of the 20th century. In 1899, the first-known recipe for brownies was published in Machias Cookbook. They were called “Brownie’s Food”. The recipe appears on page 23 in the cake section of the book. Marie Kelley from Whitewater, Wisconsin, created the recipe.

Chocolate brownies are typically eaten by hand, often accompanied by milk, served warm with ice cream “a la mode”, topped with whipped cream, or sprinkled with powdered sugar and fudge.

In Canada they are common homemade treats and are also popular on restaurant dessert menus, at pastry shops and cafes.

One of our favourite renditions of the classic dessert is this Toblerone Brownie recipe. Enjoy chewy chocolate brownies stuffed with chunks of Toblerone chocolate.

Toblerone is a Swiss chocolate brand which has been produced in Bern, Switzerland, since 1908.

The iconic Swiss chocolate bar is known for its distinctive shape, a series of joined triangular prisms and lettering engraved in the chocolate. The logo features an image of the famous mountain peak, the Matterhorn, located at the alpine resort in Zermatt.

Toblerone was created by Emil Baumann & Theodor Tobler. Emil Baumann, the cousin of Theodor Tobler, created the unique recipe consisting of milk chocolate including nougat, almonds, and honey. Theodor Tobler came up with the distinctive triangular shape and packaging. The product’s name is a portmanteau combining Tobler’s name with the Italian word torrone, which is a type of nougat.

Toblerone Chocolate Bars are sold year round but promoted heavily during special holidays like Valentine’s Day and Christmas.

We wanted to bake the ultimate decadent chocolate brownie for Toblerone lovers.

If it’s your first time baking Toblerone Brownies at home be sure to review our detailed step-by-step recipe below. Here are some helpful tips and tricks to get you started:

When To Serve Toblerone Brownies

You can eat a Toblerone Brownie anytime of the year. This indulgent recipe produces an ideal soft and chewy chocolate brownie texture with pieces of crunchy Toblerone bar dotted throughout.

We most often like to bake this recipe when Toblerone bars are on sale, or when we’re flying internationally and can get a good deal at duty free. Toblerone heavily promotes its products in grocery stores during holidays like Valentine’s Day and Christmas.

The best time of year to make Toblerone Brownies is during the holidays as it’s the perfect addition to any Christmas dessert table. The surface of the brownie features triangular slices of toblerone, which look like a Christmas tree. Have fun decorating each piece of toblerone with different colours of icing to make them look like you have decked the halls. Be sure to add a yellow star on the top of each Toblerone tree!

What To Serve with Toblerone Brownies

Brownies can easily be enjoyed on their own as a grab and go snack or late night dessert. The fact you don’t need to use any cutlery to eat them means it’s easy to sneak a slice without anyone knowing!

The most famous friend to the Toblerone Brownie is a glass of cold milk. If you’re offering them as an after dinner dessert, serve a slice with a hot pot of tea or coffee.

You can also serve a decadent ice cream sundae by placing a Toblerone Brownie in a bowl and adding a scoop of chocolate or vanilla ice cream. Squirt with whipped cream, sprinkle with chopped Toblerone bars and drizzle with chocolate fudge sauce.

How Do You Know When Brownies Are Baked?

The best way to check if brownies are done baking is with a toothpick.

Poke a toothpick into the middle of the brownies. It should come out with a few moist crumbs on it, but shouldn’t be wet. It’s better to under bake brownies rather than over bake them, especially if you’re looking to enjoy fudgy brownies.

If you have leftovers, cover the bars in plastic wrap and store in the fridge for 2-3 days.

You can freeze leftover brownies for up to 3 months and they’ll still taste fresh. Be sure to slice the bars before storing in the freezer so you can easily remove one or two when a craving for chocolate hits!

Whether you’re a novice baker or consider yourself a pastry king or queen, it’s important to outfit your kitchen with quality tools and equipment.

We’ve created a list of our favourite baking gadgets on Amazon to help you make this impressive Toblerone Brownie recipe at home!

You May Also Enjoy These Chocolate Recipes…

How To Make The Best Chewy Toblerone Brownies 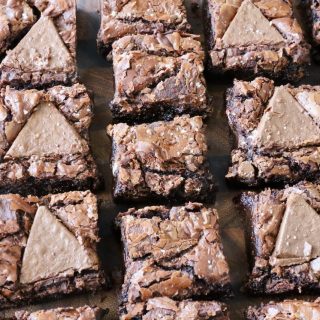