When traveling through Vietnam be sure to buy an open bus ticket. As the country is long and slender all of the tourist sites are along the main coastal highway which connects Saigon in the south with Hanoi in the north. I purchased a sleeper bus ticket which allowed me to stop off at several cities along the way for a tiny sum of 38 USD.

Moments before I got on my first night bus I was excited for the unique travel experience ahead of me. I hopped up on the bus and couldn’t help but smile as I saw thin reclining beds, three rows across with a top and bottom bunk. Never had I seen such accommodation on wheels!

I found myself a top bunk and organized all of my things for the night. The bus hopped around town picking up backpackers at their various hotels for the next thirty minutes. Three 19 year old Aussie blokes from Melbourne hopped in the three seats behind me and we chatted for the next hour. I would end up spending the next week with them and continuously bumped into them as I traveled up north to Hanoi. I actually ran into thousands of Australians (it seems they have taken over Vietnam) as it is their summer this time of year. Ninety percent of the people I introduced myself to in Vietnam were Australian university students on holiday. 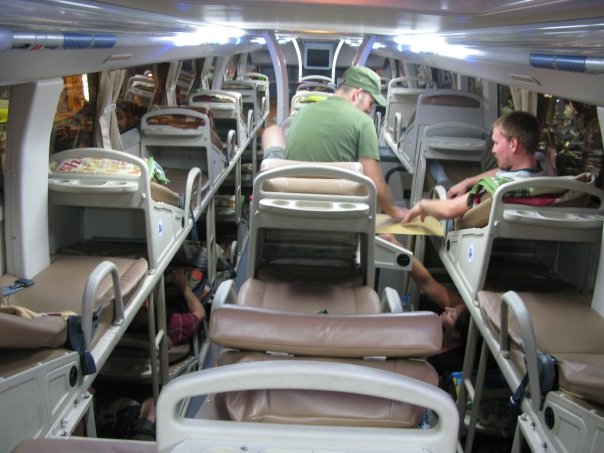 The bus to Nha Trang takes 10 hours and was not at all as horrible as one might assume. With the help of a small sleeping pill I managed to fall asleep and wake up in the early morning when the sun blasted through the windows. Mind you, the bus was bounding, a jostle to and fro. But for me, it was sort of soothing like a rocking chair.

Nha Trang is the first major stop north of Saigon. This beach resort was popularized during the war when American soldiers used it as their relaxation spot when off duty. There are plenty of dive schools, island cruises and beach chairs overlooking the ocean to keep you busy during the day. Nha Trang’s night life is also considered one of the best in the country along with some of the most diverse international cuisine (Italian, Thai, Russian and Indian). 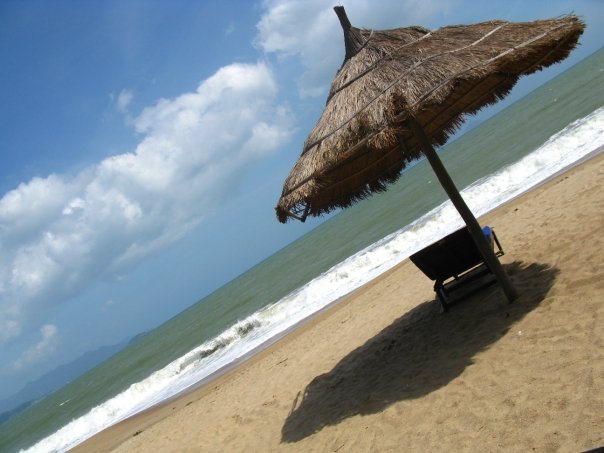 After checking into my hotel I popped by a local restaurant where I ate a delicious plate of steamed rice with fresh pineapple and roasted cashew chicken. After lunch I walked to the beach and dipped my feet in the ocean. I spent the next hour walking from one end of the beach to the other. There are many palm umbrellas which create an ample amount of shade for sun bathers lying in the sand.

Locals sell fresh crab, lobster and prawns for tourists, roasting them on portable BBQ’s. When in Saigon many of my friends who had traveled the opposite direction (and therefore had just arrived from Nha Trang) complained that the weather was horrible as it had been raining for days. I had arrived in south central Vietnam just as the seasons were changing and was glad to have arrived in Nha Trang on a day which boasted blue sky and hot sun. Unfortunately the beach was not yet at its best. The waves came crashing down on the shore making a simple swim rather arduous. Coastal winds also whipped across the sand blowing dust into the air and pedestrian faces. It was not the best beach I had ever been to but I was happy for there was not a cloud in the sky. 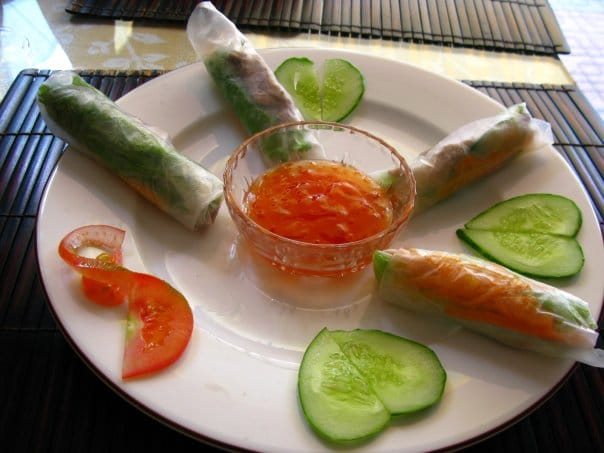 The following morning I grabbed a simple breakfast of fresh Vietnamese vegetable spring rolls. For my first experience eating these light and spicy rolls in Vietnam I was amused to see that the locals eat them differently then they are served in the West. In North America most rice paper rolls feature soft well soaked rice paper that is easy to bite into. In Vietnam they prefer to eat them hard and crunchy (requiring you to tear the roll with your teeth). 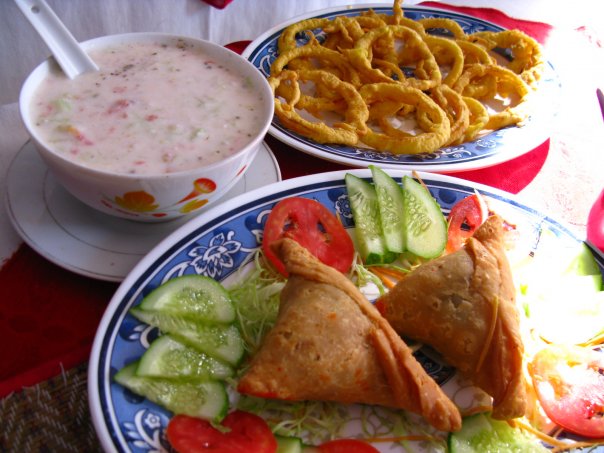 I spent the day relaxing and waiting for my next opportunity to eat. For dinner I ate at a delicious North Indian restaurant until my sides were about to split. I ordered a Mango Lassi, Vegetable Samosa with Raita, Onion Bhaji and Chicken Korma with garlic naan. In the evening we sat at the Red Apple Bar and watched our friend Will on stage at Open Mic as he sang to a lively audience of expats. I headed to bed earlier than the others and as I was lying in my bed I could clearly hear a British tourist singing several ballads by the Cardigans. A lovely lullaby. 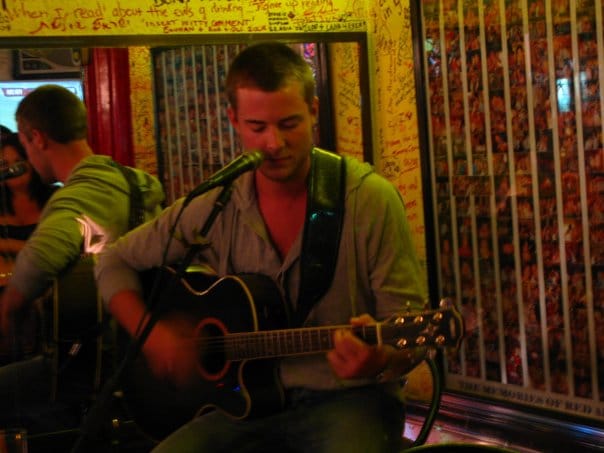 The following morning I woke up early with four folks from my hotel for a boat tour of the surrounding islands. The tour was a bit of a downer as the weather was cloudy and windy for the duration of our cruise. At the harbour we hopped on a big barge where we huddled on benches. I couldn’t help but laugh at the many tourists from Taiwan and Hong Kong who shivered together. Our first stop was a small island where the attraction is a colourful aquarium which showcases the local ocean life. The beach was hilariously lined with massive sculptures of shark, lobster and octopus. 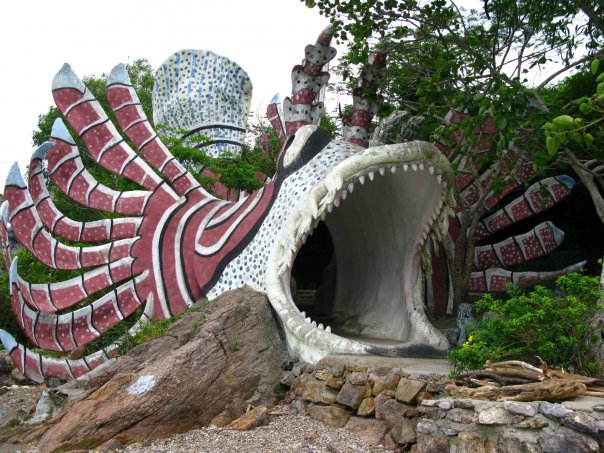 Our boat then puttered to a small harbour where we put down our anchor and spent the next hour snorkeling and tanning in the sun. A local man sitting in a donut shaped boat took a couple of Japanese tourists for a twirling tour over the coral. The centre of the donut was made of thick glass and you could see them giggling as fish swam beneath their feet. 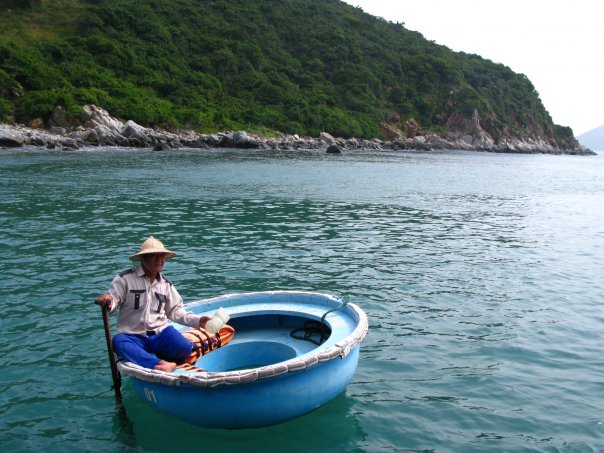 A few minutes before lunch our captain asked the group how many of us would like to try the local delicacy, Sea Urchin Soup. He then pointed out that the soup, “makes man sex strong.” Another ridiculous Asian impotence remedy. I laughed when all of the Chinese male tourists had the soup ordered for them by their wives. After living in Asia for this long, and having so many various impotence remedies thrown in my face, I wonder how poorly males perform in bed! The benches in the centre of the boat were flattened to create a massive central dining table. In the next ten minutes a massive feast was put before us. Hundreds of plates and bowls were placed under our noses. 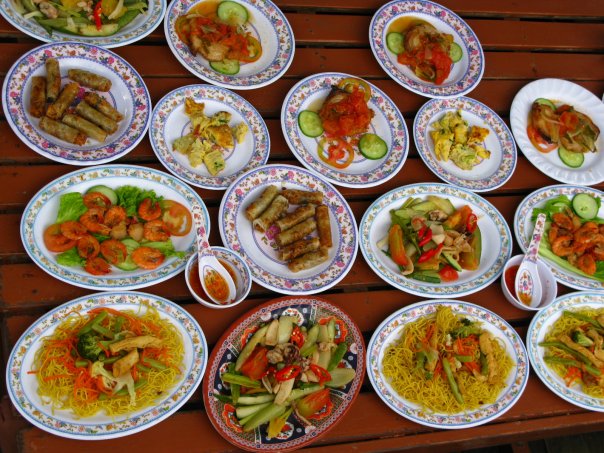 After a stuffing lunch we were given small glasses of “special cocktail” which tasted like Tang Orange Juice and Rice wine. I tossed mine over the boat. The captain and his crew spent the next hour on a make shift stage playing rock music on tin drums, a wiry guitar and squeaky microphone. He called up Israeli’s, Russians and Aussie’s to sing some of their national faves. It was beyond corny and therefore hilarious. 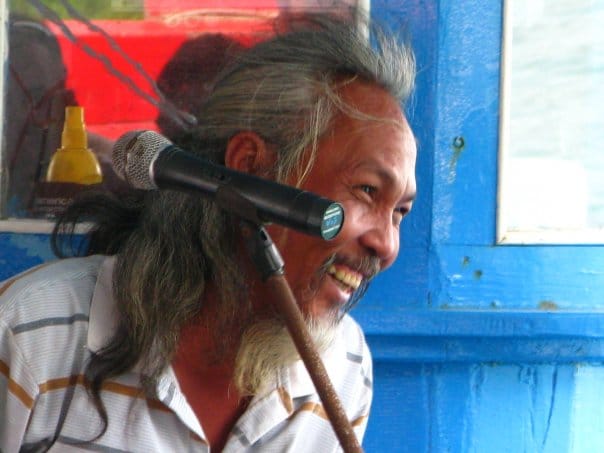 Our next stop was a touristy island where locals sold classic sculptures made of coconut and sea shells. I sat with my friends from London on the ledge overlooking the beach. We dangled our feet over the sand and watched as the waves inched closer and closer to the Taiwanese tourists taking peace sign filled portraits. We hilariously laughed as a 70 year old from Taipei was swept from her feet and popped out of the salt water in a fit of family shared laughter. On our way back to the harbour we passed by a string of lobster farms which bob up and down along the cliffs. 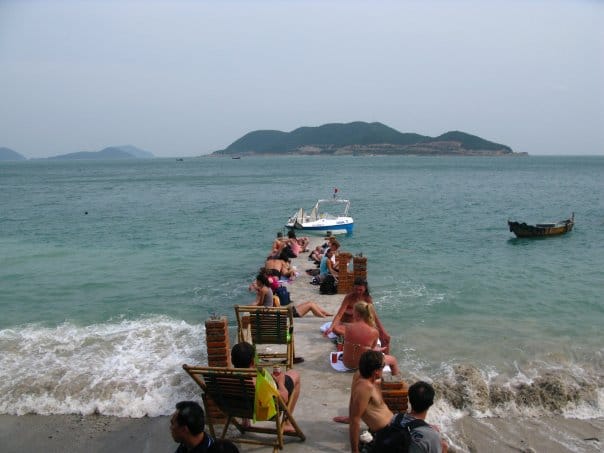 In the evening I ate dinner at Mojito Cafe with my two new friends from London. I munched on Chilli Cheese Fries and a local beer. One of my friends ordered a glass of Dalat Wine which was awful. Dalat is north west of Saigon, a mountainous area which has the perfect temperatures for grape vines. Dalat wine is currently shit, but many French wine estates are buying up land and in the process of developing a quality product. Who knows, in a few years, Vietnamese wine may just be worth drinking!

After dinner we walked to the city’s most famous nightspot, The Sailing Club, where we grabbed a few drinks and sat on the beach as the full moon lit up the ocean waves. We then hopped onto the dance floor and danced until 3am with jam jars full of pineapple juice and rum. The following morning I slept in and relaxed as I waited for my next night bus to Hoi An. 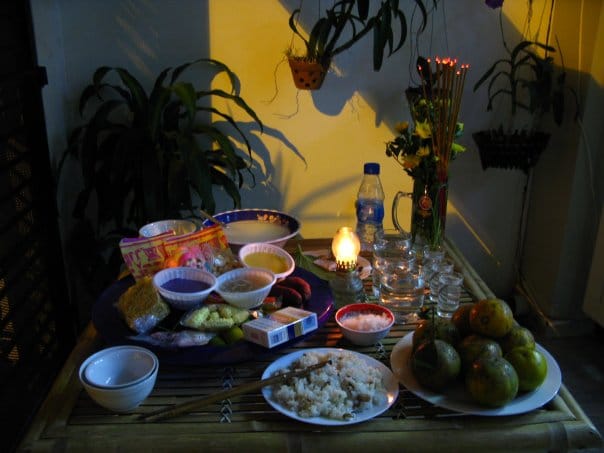 I waited in the lobby of the hotel and watched as the owners parents set up a Tet Festival Table. Tet is the biggest festival on the annual Vietnamese calendar (the Lunar New Years celebration). The table was covered in fresh fruit, rice, glasses of water, flowers, herbs, candy and incense sticks. The owner explained to me that this festival shrine is set up for Tet to ensure a new year of protection and good luck. The food is not touched and eaten until the incense sticks have burnt out. I closed my eyes and tried to meditate with the sweet smell of incense wafting in the air. I was suddenly jerked out of my seat by a toothless man who screamed and motioned me towards the night bus which sat waiting to whisk me off to Hoi An.