This simple Dairy Free Eggnog recipe is a favourite to sip at festive Christmas and holiday New Years Eve parties.

What Is An Aquafaba Cocktail?

Aquafaba is the viscous water in which legume seeds such as chickpeas have been cooked.The word aquafaba is from the Latin aqua (water) and faba (bean).

Due to its ability to mimic functional properties of egg whites in cooking, aquafaba is often used as a replacement in recipes such as meringue and marshmallows.

Its composition of carbohydrates, proteins, and other soluble plant solids, which have transferred from the seeds to the water during cooking give it a wide spectrum of emulsifying, foaming, binding, gelatinizing and thickening properties.

Aquafaba is particularly popular for people that avoid eating eggs, such as vegans. In general one medium egg white can be replaced with 2 tablespoons of aquafaba.

The simplest way to obtain aquafaba is to use the liquid from canned legumes such as white beans or chickpeas. It also can be made by boiling, steaming, pressure cooking, or microwaving pulses in water.

Our favourite Aquafaba Cocktail is a festive recipe we like to prepare during the holidays at Christmas parties. You’ll love our sweet and foamy Non Dairy Egg Free Vegan Eggnog recipe.

It is believed that eggnog was invented in Europe. As early as the 13th century, medieval monks in Britain were known to drink “posset,” a warm ale punch with eggs and figs or raisins. Over time, this likely merged with the various milk and wine punches often served at festive gatherings.

Throughout Canada and the United States, eggnog is traditionally consumed over the Christmas season, from late October until New Years Eve.

We’ve taken the classic Holiday cocktail and made it into an easy non dairy egg free Vegan Eggnog recipe that we know your friends and family will love!

Our healthy Vegan Eggnog Aquafaba Cocktail is made with fresh ingredients:

This Vegan Eggnog recipe is easy to make at home, ready to serve in 5-10 minutes.

Be sure to soak the dried fruit in rum and brandy the day before your cocktail party so they have plenty of time to soak and soften.

Our Christmas Aquafaba Cocktail recipe serves 2 people. If you’re hosting a large holiday party feel free to multiply the ingredients by the number of guests and muddle the drink in a festive punch bowl or jug rather than a cocktail shaker or in the individual glasses.

Muddle the drink with large pieces of ice or ice spheres to ensure the cocktail does not dilute too quickly.

Eggnog can be prepared with a variety of spirits so feel free to get creative and have fun when building these healthy holiday cocktails. We prefer pairing dark rum with brandy but you can also use Canadian whiskey, Scotch whisky, blended Irish whiskey or American Bourbon.

You May Also Enjoy These Festive Christmas Holiday Cocktails…

Before hosting a swanky Vegan Eggnog Christmas soiree you’ll need to ensure you have the best bartender tools and cocktail equipment. 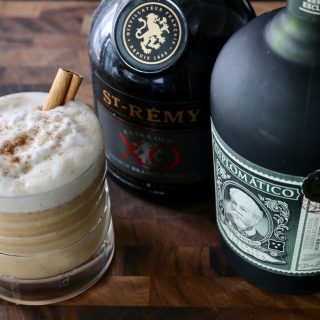