Are you an Ontario craft beer fan looking to sip through the best Muskoka breweries?

Do you live in Muskoka and find yourself looking for a new local to meet other craft beer aficionado’s? Or do you regularly visit cottage country and need a new craft beer to enjoy on the dock?

All of the Muskoka breweries offer visitors access to a retail store, brewery tours and taproom. Clear Lake Brewing and Huntsville Brewhouse are the only breweries in Muskoka offering a restaurant and dining room.

Dobbernationloves had the opportunity to chat with Todd Lewin, President of Muskoka Brewery, about the region’s unique brewing history.

So what were some of the first Muskoka breweries? Lewin explains, “Muskoka Brewery was the first. Back in the late 1990’s there was a Molson Brewery in Barrie and Northern Brewery up in Sudbury but nothing in between. There were a ton of passionate beer drinkers in the Muskoka region and the founders Gary McMullen and Kirk Evans wanted to create beers that better represented the unique Muskoka region.”

So when Muskoka Brewery first opened, what did the local beer industry look like in Ontario cottage country? Lewin adds, “Muskoka Brewery kicked open the doors in June 1996 with one brand, our flagship Muskoka Cream Ale. At that time most of the beers in the region were lighter lagers produced by the big three breweries. There was nothing truly local and Muskoka Brewery became the first brewery to start producing more flavour forward ales that quickly starting to gain a fan base in the community. Today, there are several breweries that have opened up in the Muskoka region but for 14 years Muskoka Brewery was the only one leading the charge.”

Lewin goes on to describe Muskoka’s more recent craft beer boom, “Lake of Bays Brewing opened in 2010 and then others like Sawdust City soon followed. The Muskoka region is all about the great outdoors and easygoing, relaxing times with friends and family. The Muskoka breweries have a close kinship and work collectively to help grow the craft beer business in the area.  The vibe here is more laid back than in the big cities and think many of the beer styles and tap rooms reflect this ‘cottage country’ feeling. We are surrounded by lakes, rivers and trees and protecting these resources is important to all that brew here and call Muskoka home.”

So what trends should craft beer fans expect to see in Muskoka? Lewin predicts, “As more and more people come North to the Muskoka region I see continued growth for breweries in the area.  Beer tourism is growing but the breweries need to start thinking outside of just beer to partner with the local wineries, cideries and distilleries on true ‘craft’ tourism in the area. Along with other areas like Niagara or Prince Edward County, the Muskoka region has the potential to really lead on this front. Muskoka has so much to offer year round, there is an opportunity to really pair that with great beer experiences.”

Sleep at one of our favourite hotels when enjoying a craft beer tour of the Muskoka breweries.

Gary McMullen and Kirk Evans started building their craft beer dream in 1995, opening the doors of the original Muskoka Brewery in June 1996. Today, Muskoka Brewery is owned and operated by Todd Lewin and Bob MacDonald. The duo have transformed a small craft brewery (8,000 sq ft) to a large production facility (40,000 sq ft).

Muskoka Brewery President, Todd Lewin describes the company’s growth since he began with the company in 2010, “We’ve been fortunate to achieve some good growth over the past eight years. In terms of beer volume, we’re about six times as big as when I got here and have also ventured into the distilling business. In the same time frame, our team has grown to meet this demand, adding 100 team members to expand our operations and market reach.”

Lewin adds, “Based on the support from both locals and tourists, our taproom and patio have more than doubled in size since 2017. The patio has really enhanced that outdoor Muskoka experience in the warmer months. In 2019, we’re going to be adding an events space to accommodate bigger groups and dial up events like our Venture Fest, Winter Village and Muskoka Hullabaloo.”

Alongside its award-winning craft beers, Muskoka Brewery has recently launched a distillation program, which produces one of Ontario’s most celebrated dry gins.

Sawdust City Brewing Company is dedicated to the art and science of creating exceptional craft beers. Brewmaster Sam Corbeil and his talented team create award-winning beers that expand the borders of traditional flavour profiles from their 20,000 sq ft facility on the main street of Gravenhurst.

The Canadian-made brewhouse includes a canning line, barrel-aging room, large retail store and Tap Room where live music entertains sud-sloshers every Friday and Saturday night. The Tap Room features a 24-foot live-edge bar milled from a 100-year-old naturally felled pine tree, honouring the long history of logging in Muskoka. Hop up on a bar stool here and you’ll find 12 draught lines and friendly bartender keen on walking you through a tutored tasting.

Step through the main doors and you’ll find a retail store, tap room and bottle shop all in one space. The retail store at Lake of Bays Brewing sells branded t-shirts, sweaters, glassware, magnets and bottle openers. The actual brewery is fairly small – less than 4,000 square feet with an off-site warehouse for storage.

Directly across from the gift shop shelves you’ll find a craft beer bar, serving fresh beer on tap. For those looking to pop by the brewery before enjoying a cottage holiday, two large fridges are stacked with ice-cold tall cans. Beer lovers can also order growlers, filled with your choice of fresh beer, straight from the tap. Kegs are also available for purchase and need to be pre-ordered 2 weeks in advance.

Lake of Bays Brewing produces a year-round core range as well as a rotation of seasonal beers. Other Lake of Bays Brewing craft beers that have been produced in the past include Pumpkin Ale, Pina Grande Wheat Ale, The West Wind Black IPA, A Doppel Do Ya Weizen, Nightwatcher Oatmeal Stout, Oxtongue IPA and Broken Axe APA.

Lake of Bays Brewing also operates a brewpub in Huntsville and will be opening a Barrelhouse in Bracebridge in the Spring of 2020.

Looking to visit a craft brewery in Huntsville, Ontario?

One of Muskoka’s favourite breweries, Lake of Bays Brewing in Baysville, launched its own brewpub in downtown Huntsville in May, 2018. The inspiration to open the Huntsville Brewhouse came from wanting to provide a unique experience that combined quality small batch, handcrafted brewing with locally inspired food offerings.

Of course, fresh craft beer is brewed on site, with the tasting bar offering 16 taps to sip and sample through.

Chef Brian Stone trained at the Royal York Hotel and Deerhurst Resort before developing the Huntsville Brewhouse’s menu. Kevin Schmidtke from Lake of Bays Brewing shared, “Our Brewhouse burger with a couple of ringers is the most ordered item with Blackened Rainbow Trout Tacos coming in at a close second.”

Clear Lake Brewing first opened its doors in August, 2017 near Bala and Port Carling in Muskoka.

Founders Greg Knight, Rob Wilson and Kit Redding were inspired to launch Clear Lake Brewing because they wanted to open a new business in the small village of Torrance.

Step inside the Muskoka brewpub and you’ll find 8 taps at the bar. Seven pour Clear Lake Brewing’s in-house brands with the other offering featuring a rotating guest brewery or cider.

Rob Wilson explains Clear Lake Brewing’s craft beer production, “We produce all of our core brands year round. Our Cranberry Radler is most popular in summer, but is still available year round. Our number one beer is our Session Ale, we also offer an IPA, Honey Cream, Porter, Pilsner and Amber Ale.”

After sipping through a flight of fresh Muskoka craft beer wag your finger down Chef Jacob Mussen’s menu. Wilson explains the Clear Lake Brewing food philosophy, “We make good pub food that pairs well with our beers. Our craft beer is a key ingredient in a few of our dishes. We also work closely with two local businesses: Johnston’s Cranberry Marsh make up our cran radler beer and Don’s Bakery in Bala produces our breads, buns and desserts.”

Clear Lake Brewing’s retail shop offers hoodies, t-shirts, hats, glassware as well as growlers and kegs. You’ll also find a fridge filled with canned beer to take back to the dock to share with family and friends.

Katalyst Brewing is Muskoka’s newest craft brewery. It’s located in the historic Granary Building in downtown Bracebridge, formerly the home of Muskoka Brewing from 1994 to 2012.

Katalyst Brewing was initially started in 2016 by husband and wife team, Mark and Krystal Verok. The duo originally launched the Ontario beer brand as a contract brewery based in Toronto. Krystal initially got Mark interested in beer making when they first started dating, acting as the, “c(k)atalyst for his venture into the brewing world.”

So what inspired Krystal and Mark to open a craft brewery in Muskoka? “We looked in Toronto and couldn’t find the right building that had what we were looking for so we started looking outside the city. After a bit of a search we found the building in Bracebridge we are in now and liked the location and history. We also spent a lot of time in Muskoka over the years and decided it would be a great place to live full time,” said Mark.

Katalyst Brewing opened its doors in Bracebridge in December, 2019. Skip inside the craft brewery and you’ll find ten taps at the bar, as well as juice boxes, kombucha, cold-brew coffee and other non-alcoholic options.

So what beer styles should you expect at Katalyst Brewing? Co-owner Mark Verok says, “Most of the beers will be rotating, and we plan on releasing a new beer every two weeks.” He has a penchant for smokey porters to pilsners and experimenting with sour and barrel aged beers.

The Granary Building is shared with several other local businesses in Bracebridge including Sully’s Muskoka. Katalyst Brewing occupies 2,500 of the buildings 20,000 square feet. Ask to get a tour of the production area and you’ll find a 10hl system featuring 6 fermenters.

Canvas Brewing opened in the Spring of 2020, making it Muskoka’s newest craft brewery.

Visit the tap room to sample from over 20 fresh brews, many of which are one-off seasonals that switch up throughout the year.

If you’re feeling peckish, brewery management encourage visitors to support the local food trucks located in the parking lot out front. You’re welcome to eat your take out paired with a flight of fresh Canvas Brewing beers.

Some of the links in this story use affiliate links. This means that if you book through our site, Dobbernationloves will earn a small commission at no extra cost to you. Your support helps us to produce comprehensive content. 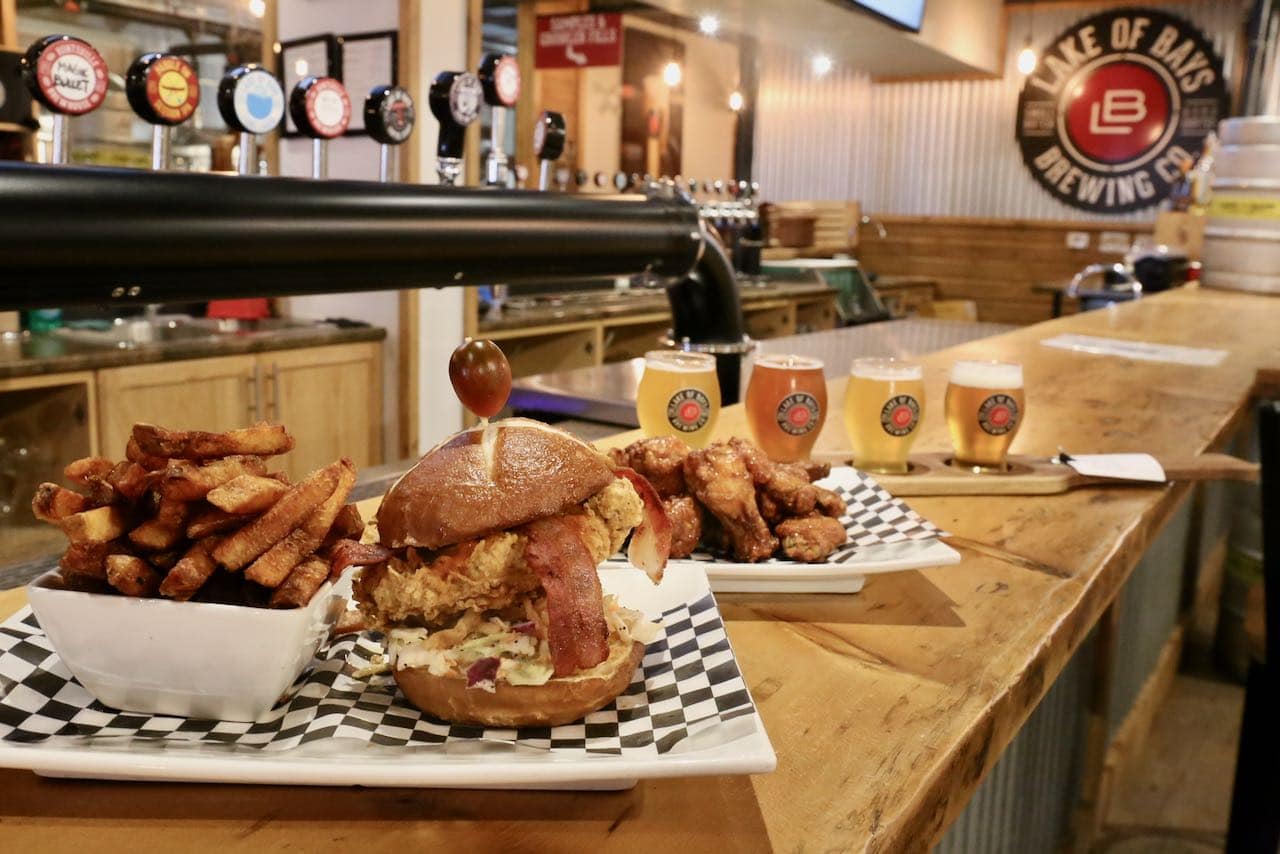 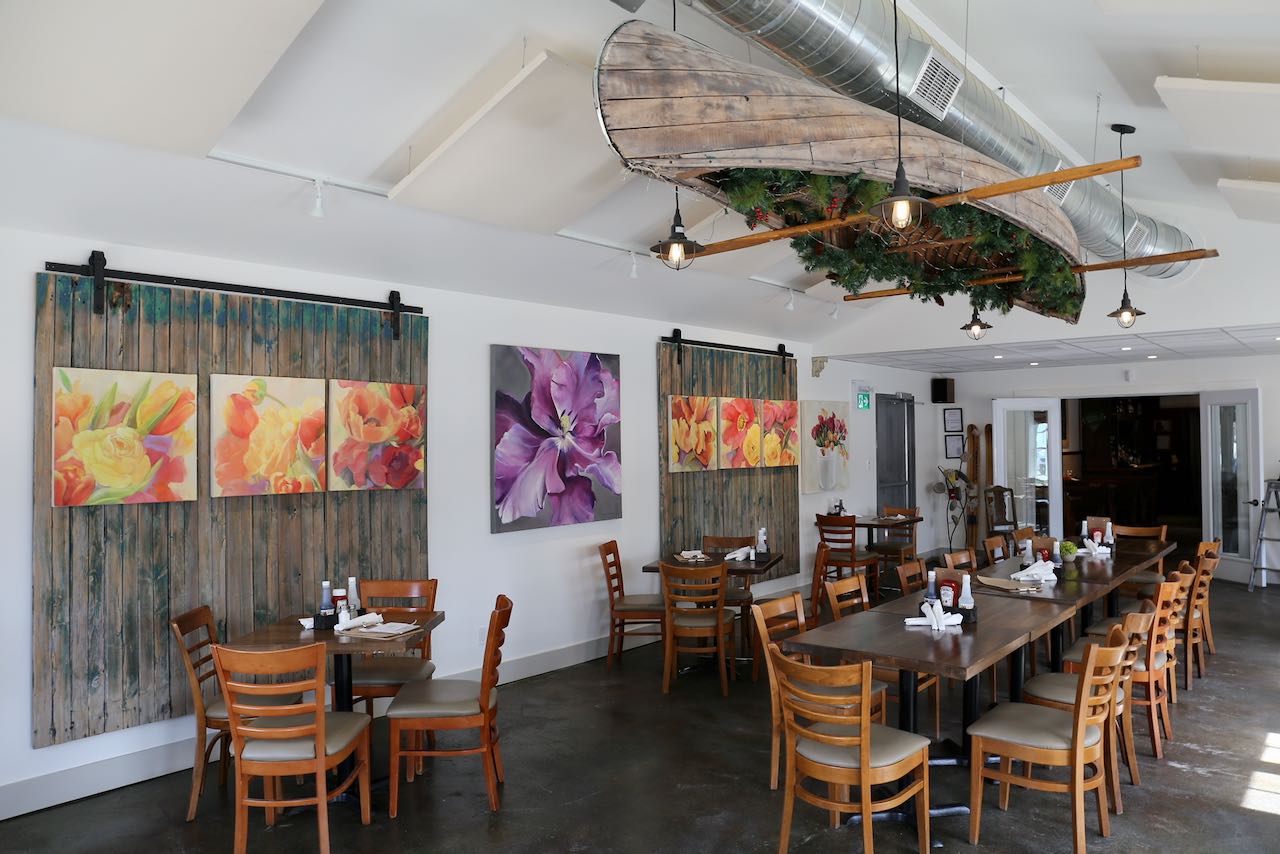 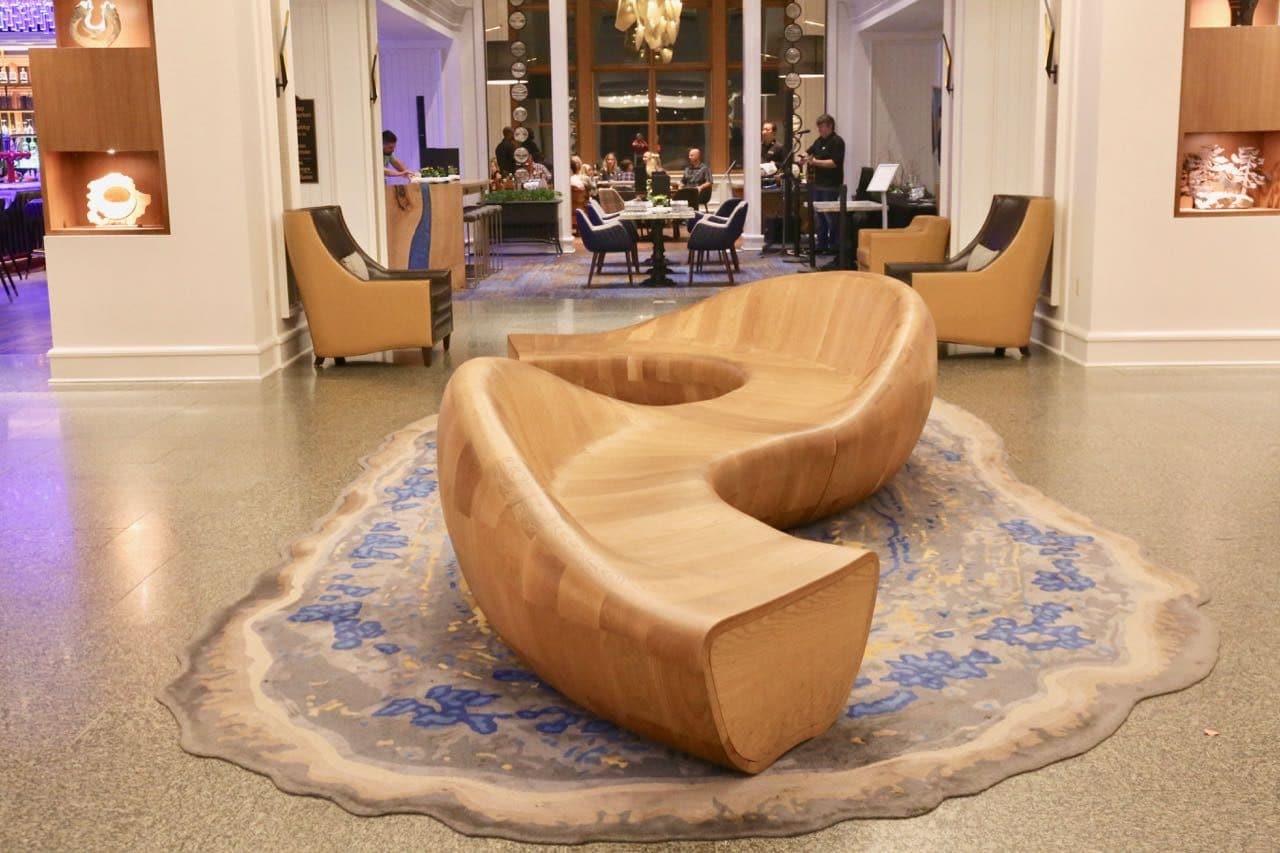