Fun loving Cologne is the greatest of all western Germany’s cities. It has a unique architectural inheritance from its long history which creates a powerful sense of community – above all in the instantly recognizable shape of its cathedral, one of the most famous religious buildings on the planet and the seat of Germany’s Catholic primate. Cologne also has a highly developed sense of distinctiveness, expressed through the strong Kolsch dialect, the beer of the same name, and a hedonistic approach to life most apparent during Karneval.

For centuries Cologne was the German metropolis. The city’s origins are Roman: the Emperor Caludius’s fourth wife Agrippina – Nero’s mother – was born here, and after their marriage he raised the city to Colonia status, from which it derives its name. Later, while upstarts like Munich and Berlin were still a twinkle in the eye of their founders, early medieval Cologne was the largest city north of the Alps, ruled by powerful archbishops and benefiting economically from its strategic location astride the Rhine River.

Today visitors enjoy a pleasant mix of “whispers of the ancient” and enthusiastic blasts of modern day. The old town and Cathedral are awe inspiring for history buff’s while a gaggle of art galleries and Michelin starred restaurants offer wave of contemporary artistic energy. You can easily tackle the city in two days. Here are the essentials you just can’t miss, My Top 10 Thing’s to See and Do in Cologne: 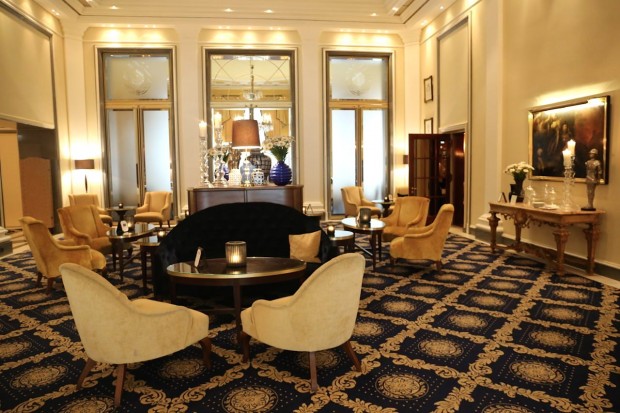 The city’s most luxurious hotel is located but a stones throw from Central Station and offers stellar views of Cologne’s iconic cathedral. Locals are quick to inform newbies that Excelsior Hotel Ernst is the only historic hotel in town which was not damaged during WWII. The property originally opened on May 16th 1863 and was the first choice of prominent guests like German Emperor William I who observed the completion of the cathedral from his room here. Today the hotel continues its creme de la creme tradition, offering a home away from home for celebrities, political players and the jet set.

So iconic, so perfectly realized does the profile of Cologne’s awe-inspiring Dom appear that it’s a surprise to learn that the familiar silhouette lacked those soaring, 157- metre spires for most of its history. Construction of the Dom – whose design was inspired by the colossal French cathedrals of Beauvais and Amiens – was prompted by the transfer of the relics of the Three Magi from Milan in 1164. It’s only when you get up close you appreciate its sheer size, at which point the sooty towers resemble vast waterfalls of Gothic sculpture. 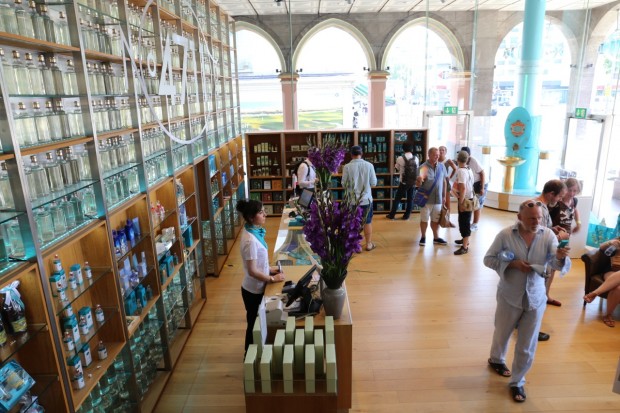 In 1792, a Carthusian monk presented a young couple called Mr. and Mrs. Muelhens with a valuable wedding gift. It was a secret recipe for how to make “aqua mirabilis” – which later became known as Eau de Cologne. Wilhelm Muelhens quickly realized the value of this recipe and founded a company to produce Eau de Cologne in Glockengasse. The original building still stands today! In 1796, during the French occupation in Cologne, the French commander General Daurier ordered that all buildings should be consecutively numbered. Wilhelm Muelhens’ house was given the number 4711 which became the registered trademark of the company in 1875. Today the 4711 House of Fragrances offers a petite museum, flashy gift shop and 4711 Original Eau de Cologne Fountain where guests can flash their fingers and quickly dab their necks with the 200 year old scent-sation.

Museum Ludwig is sandwiched in the city by the Roman museum, Dom and Rhine river. Though it has a fascinating complex contemporary roofscape, the museum is a self-effacing work of architecture that doesn’t try to compete with the glories of the Dom. Inside, a succession of handsome and light-flooded spaces provides a wonderful setting for an exceptional collection of modern art. The museum’s particular strong point is Pop Art of the 1960s and 1970s, and you can feast your eyes on works of David Hockney, Roy Lichenstein and see Warhol’s celebrated works depicting Brillo and Campbell’s Soup cans. The Ludwig also has a roomful of works by Picasso, several Expressionist canvases by Karl Schmidt-Rottluff and examples of the Bauhaus, De Stijl, Nouveau Realisme and Fluxus movements. 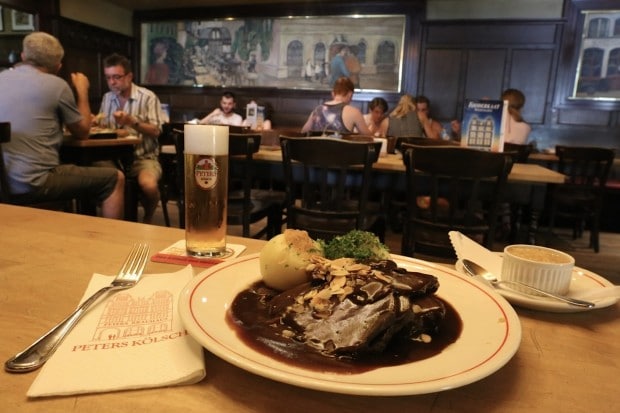 Big yet surprisingly cosy and intimate, Peters Brauhaus serves a bewildering choice of Cologne delicacies to anchor down the eponymous Kölsch. The brewhouse was first mentioned in the tax books of the city of Cologne in 1544, making it the oldest and most celebrated brewery. Located on the north side of the Alter Market, beer fans can opt to sit in the sun on a wee slice of the cobbled plaza or march inside to enjoy a proper beer hall experience whilst plopping down at communal feasting table for a few swigs.

The glasses used for Kölsch differ a great deal from other German beer glasses, as they are of a cylinder form and only fill to 0.2 litres. A waiter in Cologne is called Kobes and traditionally wear blue aprons, a white shirt, a dark blue tie and a leathern wallet around the hip. They are known for having rough manners, which I quickly learn as I’m offered my first petite beer and chirp “can I have a larger glass?” to receive a quick reprimand, “in Cologne we serve beer fresh only in these glasses!” Take Note: Kobes keep on serving Kölsch until the guest places their coaster onto the empty glass. I sipped through three refreshing glasses which I paired with a plate of Sauerbraten, a German beef roast marinated for days in a mixture of vinegar, wine, herbs and spices and served steaming at the table alongside plump potato dumplings and sweet apple puree. 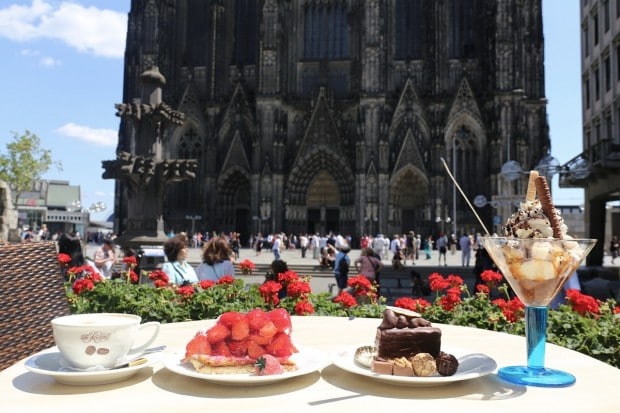 The city’s perfect perch for people watching can be found at the historic Cafe Reichard which has been serving up frothy latte’s and sweet cakes since 1855. Located directly in front of the Cologne Cathedral, grab one of the tables on the al fresco terrace and gawk at the city’s finest view. I plopped myself down at the breakfast hour and out of respect for the institution, ensured I sampled through their most iconic sweets. A decadent start to the day featuring frothy cappuccino, strawberry pie, chocolate truffles and a whipped cream topped ice cream sundae. This is breakfast, this is living!

Christopher Street Day all but takes the city in late June and early July, regularly attracting between 750,000 and a million people to see the colourful parade that snakes its way through the city. I’ve been to Pride festivals all over the world and was delighted by the German-ness of Cologne’s festival. Crowds slurp fresh local beer while devouring traditional street foods like rosti, sausage, schnitzel and doner. Boisterous boys sing in unison as traditional folk songs blast overhead and lesbian couples tip toe across the street in their Birkenstocks while dressed in lovely lederhosen.  I ran along the bridge that stretches across the Rhine River on the morning of the parade and hopped on a float where I spent the next six hours crawling through the city with the boom of disco beats. I quickly became friends with three Drag Queens who are known locally as Femmes Fa-Gee and was amazed that they managed to dance in 40-degree weather throughout the afternoon covered in thick makeup, fancy frocks and diva hair. 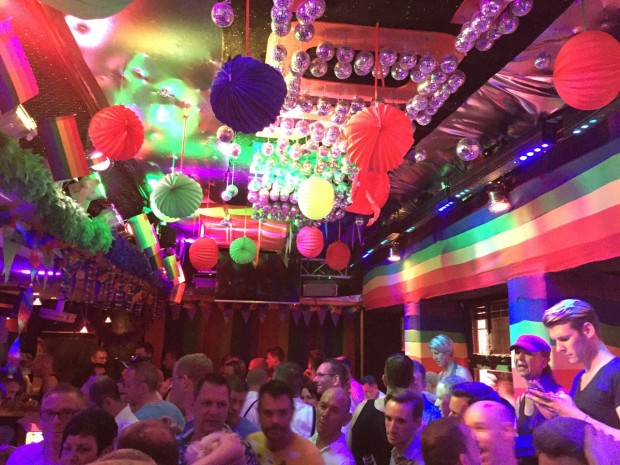 Cologne’s LGBT scene is one of the biggest in Europe, catering not just to the one in ten city residents who identify as lesbian or gay but also to regularly weekend visitors. Though clubnights take place at venues all over the city, there are two main focuses for the bar scene: traditional bars attracting an older, mostly male clientele to the Altstadt area between Alter Markt and Heumarkt (the hub for CSD celebrations) – and the larger more fashionable scene focussed on Rudolfplatz.  After Eurovision superstar Conchita Wurst performed on stage to an energetic crowd I headed to Rudolfplatz to check out the city’s top gay bars. During the Pride Festival the neighbourhood offers a pedestrian friendly, car-free zone where thousands of gays drink beer and wine in the street with an air for the bacchanal. I mix and mingled with locals to find out what bars were the favourites of the moment: head to Ex-Corner (pictured above) for a classic watering hole experience and Exile for a dance-tastic late night complimented by performances by the city’s top Drag Queens.

On my final morning in the city I walked up to the zoo and hopped on a cable car, the Kolner Seilbahn, which connects to Rheingarten Park on the opposite side of the river in Deutz. The views en route are spectacular: a brilliant 360 degree panorama where big barges float beneath your feet and Cologne’s Cathedral stands stoically in the distance. Once you’ve reached the other side, Rheingarten provides ample space for lazing in the sun and people watching, also boasting an exclusive spa, where I’d be spending my final hours in the city.

Situated in Cologne’s Rheinpark, Claudius Therme is one of Europe’s most beautiful spa’s featuring indoor and outdoor thermal baths, saunas, relaxation rooms, gorgeous gardens and massage therapy treatment facilities. I spent two hours at the Claudius Therme’s sprawling urban oasis, my first experience at a traditional German spa. For prude North Americans a visit might be a bit of a shock. You’ll have to get outside of your comfort zone (and clothes) as the majority of the space is “textile free,” yes that means your nude with both male and female strangers honey!

Here’s how it works: you’re given a wristband which opens and closes your designated locker. Stepping outside of the change room you’ll find several indoor pools which open up into an al fresco thermal spa featuring whirlpools, solariums, massage jets, bubble beds, neck showers and current pools. The entire swimming area is bathing suit friendly (you’re not forced to get naked yet).

The spa’s sauna village is absolutely charming, as each sauna is found inside a traditional German log cabin. It is here where nakedness is a necessity so drop your towel on a hook, open your eyes wide and smile at your naked neighbours. You can relax in mild herbal steam bath, the panorama sauna which has a view of the Cologne Cathedral, Finnish sauna, seraglio bath or Russian banya.