Barrie’s best brewery first opened its doors in 2005 as the Robert Simpson Brewery. It was named in honour of the first mayor of Barrie, who was also the owner of a local brewery in the 19th-century. The company changed its name to Flying Monkeys Brewery in 2009. It was the perfect leap for the quirky craft beer brand, giving the brewery a makeover that was more in-touch with its outside-of-the-box personality.

The Barrie brewery’s president Peter Chiodo explains the name, “Flying Monkeys Brewery is a little left of centre. The name was inspired by a sign I have on my back porch: ‘Don’t make me get out my Flying Monkeys’. It is indeed from The Wizard of Oz, which is really a pretty trippy adventure.”

Barrie’s best craft brewery is not one for a producing basic beer. The brewing team seeks to push the envelope by creating beers that express unique flavour profiles. Chiodo adds, “We make beers you don’t typically get in Canada, flavour-wise. As well, our beers are generally higher-gravity beers, a technique that results in a higher alcohol content.”

So how does the creative team at Flying Monkeys Brewery dream up Ontario’s next best beer?

Chiodo explains, “We actually have an area of our brewery that makes 3 hectoliters in a test vat where we constantly have several different recipes in various stages of production in an effort to create the next Flying Monkeys taste sensation. Sometimes it’s magic like with our peppery Matador 2.0 or the sweet Amarillo flavour in the Hoptical Illusion Almost Pale Ale. There are other moments when ingredients you swear should blend together to provide an exquisite taste instead taste like a monkey’s… well, you know. But that’s why we enjoy the whole experimentation process here at Flying Monkeys Craft Brewery. It’s tricky, but it’s a lot of fun.”

Today, the Barrie brewery employs 89 people and exports to over 23 countries making it the largest international shipper of Ontario craft beer.

If you’re visiting Barrie, skip over to the Flying Monkeys Brewery bar and you’ll find 16 different taps frothing with fresh beer. Eight are core or seasonal beers, while the remaining taps are small batch pilots the brewing team are tinkering with. Some one-off brews offer unique flavours that you might only experience at the brewery in Barrie.

Heading to Barrie on a craft beer pilgrimage and feeling peckish?

Chef Tingley explains the brewpub’s food philosophy, “Craft beer creates little communities at each table, so lots of our fresh, homemade food is designed with sharing in mind. And because we’re a brewery, naturally we use our beer in much of our menu. The menu at Flying Monkeys Brewpub is small, creative and fresh, just like our craft beer. Folks love our fat pretzels, sprawling sheet nachos, and famous burger.  A particular favourite seems to be the Yardbird, which is a crispy, buttermilk fried chicken sandwich with fresh fennel slaw and spicy, beer-infused sriracha mayo.”

Like the craft breweries seasonal beers, the Flying Monkeys restaurant menu also changes with the seasons.  The kitchen switches up the menu 3 to 4 times a year and offers a special prix fixe menu and some really funky, creative offerings for winter Barrielicious, Barrie’s annual food festival. Chef Tingley is famous for creating trendy foods as well as fun and weird dishes. Memorable dishes from the past include Fruit Loop encrusted Chicken & Waffles, a decadent donut burger and 12 Minutes to Destiny-infused Raspberry Hibiscus creme brûlée.

If you’re planning to enjoy a night out in Barrie, contact the brewpub in advance to inquire about what entertainment they’re offering. Beer lovers in Barrie can enjoy live local music five days a week.

The entire Tap Room & Brewery is designed for folks to experience the quirky culture of Flying Monkeys. Since brewery tours are free, they don’t include a set tasting. People usually linger after the tour to enjoy beers in the Tap Room or on the patio in summer. The free beer tour in Barrie draws approximately 70,000 curious imbibers each year!

So what’s the biggest surprise on the Flying Monkeys Brewery Tour? Realizing just how small the operation is! Every Flying Monkeys beer found anywhere in the world is brewed in the 2400 square foot brewhouse in downtown Barrie.  The brewing team produced an astonishing 24,000 hectolitres in the brewery in 2019!

For those looking to pop by the brewery in Barrie before enjoying a cottage holiday in Muskoka, a large fridge can be found stacked with ice-cold tall cans. Beer lovers can also order growlers, filled with your choice of fresh beer, straight from the tap. 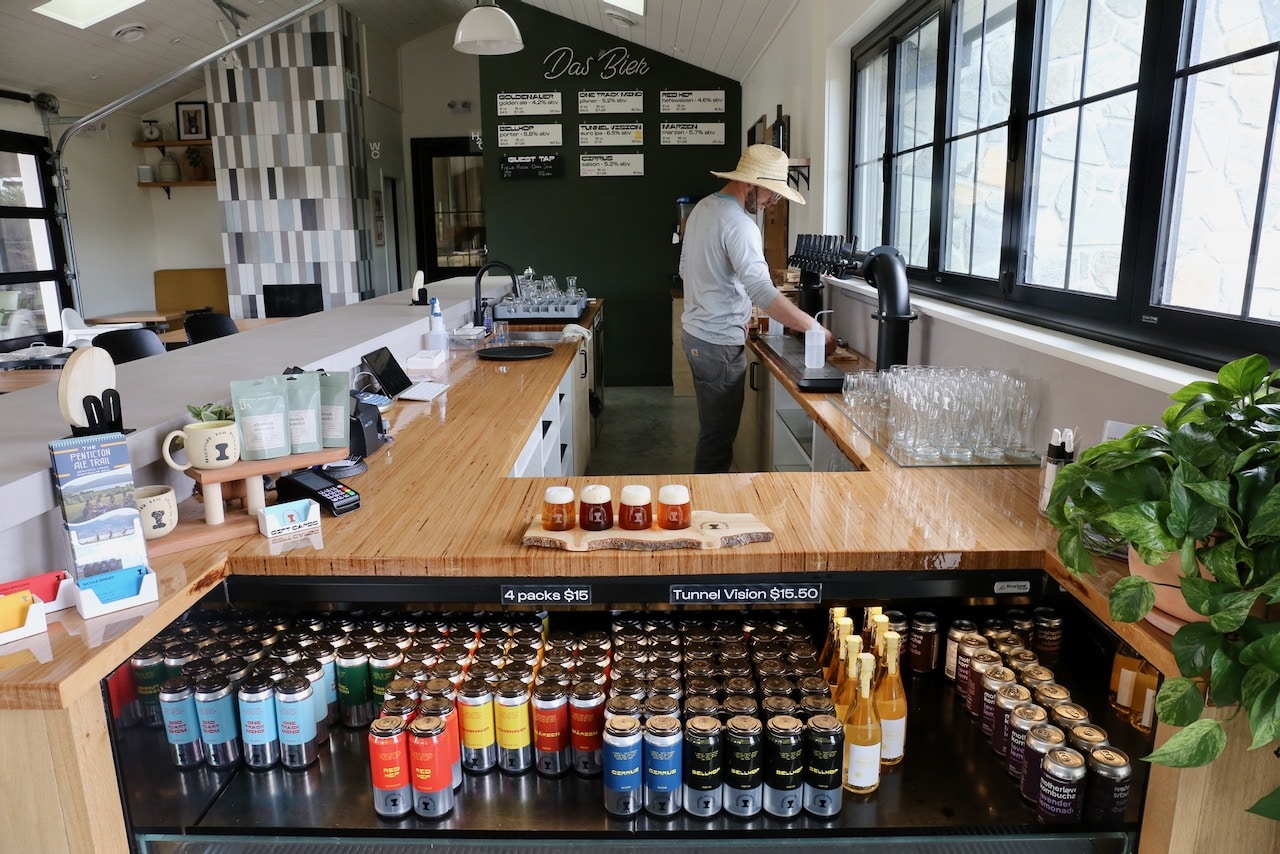 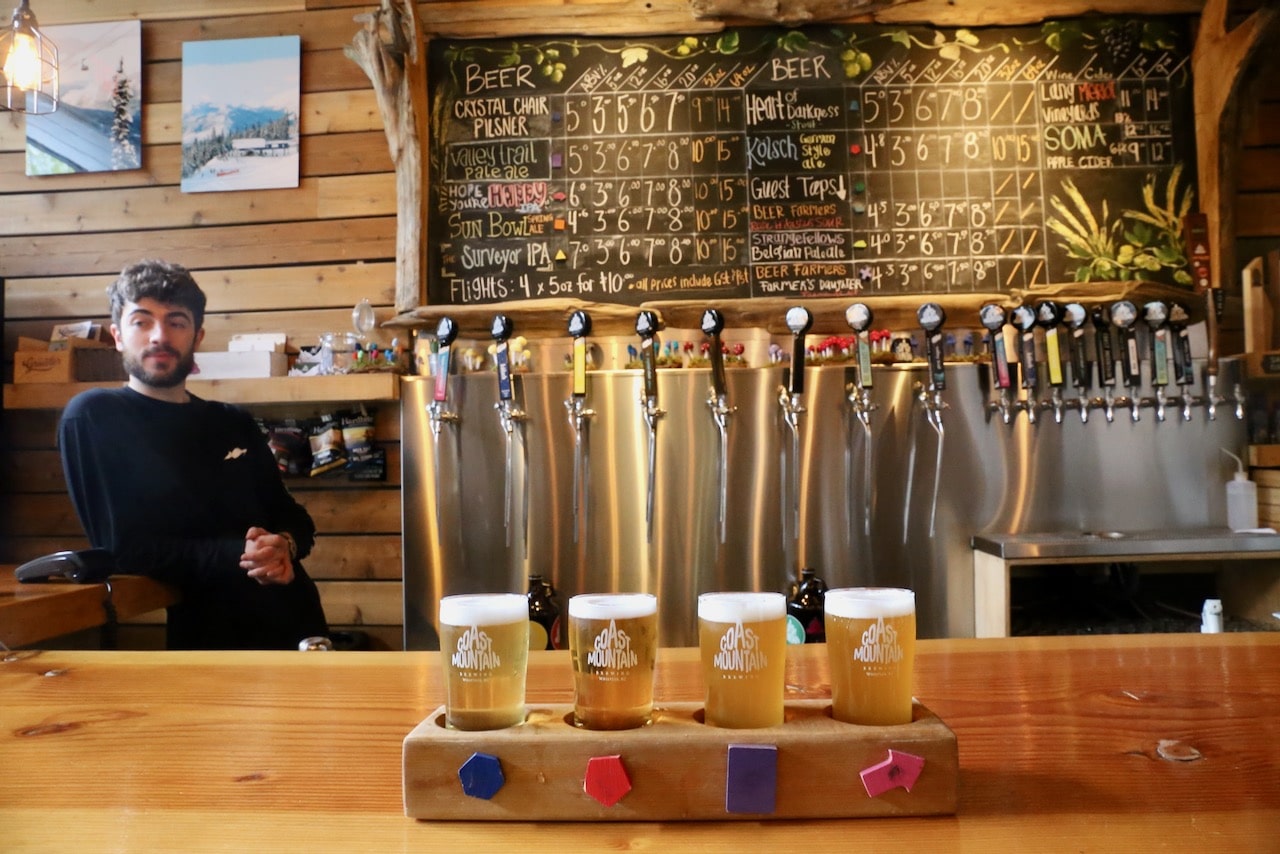