Films about family dysfunction usually fall into one of two categories. There’s the overly bombastic and almost satirical take on family life while the other can be considered nuanced, grounded and serious. Think the Royal Tenenbaums and Alexander Payne’s Nebraska. But every once in a while a film and filmmaker shows us that two can be combined to great effect, if considered with great care. Noah Baumbach is that filmmaker and The Meyerowitz Stories is one of those films.

Both hilarious and heart wrenching, The Meyerowitz Stories launches on Netflix October 13 and boasts a talented cast featuring Adam Sandler, Ben Stiller and Elizabeth Marvel. The narrative focuses on three estranged siblings trying to reconnect with their aging father played by Dustin Hoffman, at his art show retrospective.

It’s a film that straddles that fine line between deft comedy, finding humor in the personal, and a dramatic case study of this unruly and challenging family. And while all the performances are top-notch, I was reminded once again at how great Sandler can be in a dramatic role. We’ve seen glimpses of his range before in Punch Drunk Love and Reign Over Me, and he does it again here. The fact that he was able to hold his own with Hoffman was remarkable. It was his performances here that made me stop and wonder for the 100th time, why he doesn’t take on more challenging roles like this one. 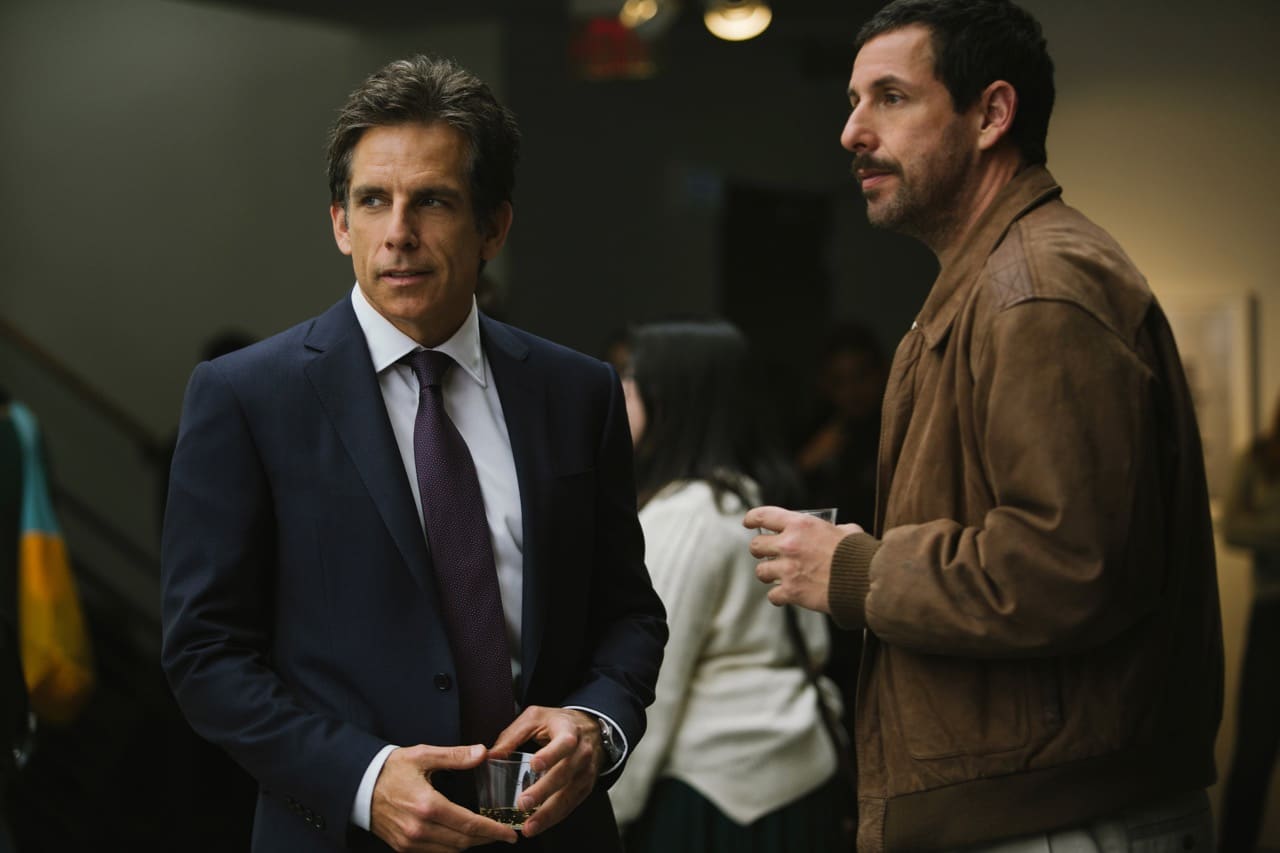 The film wisely shifts back and forth between the three siblings and although Sandler’s Danny and Stiller’s Matthew get the most screen time, Marvel’s Jean brings a level of biting cynicism and begrudging love, that mixes in perfectly. Emma Thompson was also cast perfectly as Sandler’s daughter leaving for university. Despite the small amount of screen time, Thompson does a great job of showing such a close father daughter relationship, and adds an extra layer of humour dealing with Danny’s various neurosis.

One of the really interesting things Bombach does with the structure, is that despite the vignette style of telling the story, there is a noticeable arc to the characters which plays into the arc of the entire movie. Bombach has progression flow through the characters so everything is tinged emotionally in a way that wouldn’t have been as prevalent if the focus was on the actual narrative arc.

The Meyerowitz Stories is familiar ground for Bombach who excels at exploring the nature of family and figuring life out throughout most of his movies. But that’s really where the similarities end, because one of the fascinating things about Baumbach’s entire body of work is how he tackles similar themes in such a different way. Frances Ha, for example, is shot entirely in black and white, and While We’re Young explores what it means to be growing older in the era of social media.

The Meyerowitz Stories, examines the role expectations play in the way we’re raised, specifically Baumbach seems to be interested in how we live up to the expectations others place on us and how daunting that can feel. He asks the question: Are these expectations fair? And how hard should we focus on external perception before turning inward and instead focusing on what we expect from ourselves.

The Meyerowitz Stories is a tender hearted, hilarious film about coming to terms with your family and who you are because of them. Cuddle up on the couch with a loved one and laugh (or cry) alongside a variety of fantastic performances and top-notch storytelling.