There’s one thing the Vikings exhibit sets out to do: scratch that image of barbaric beings right from your brain. Housed by the Canadian Museum of History — located in Gatineau, Quebec, a skip and a jump away from downtown Ottawa — this popular travelling exhibition is all about debunking myths. What with shows like Game of Thrones and Vikings having piqued pop culture interest in ancient civilizations, real or imagined, there’s no better time to educate us masses about fact versus fiction. 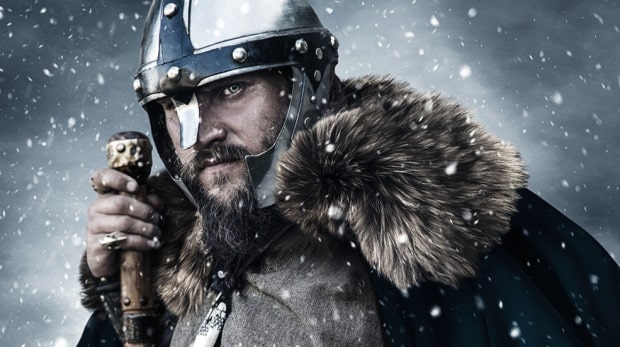 The Viking Age, according to historians, got its start in 793 when monks at a Northumbria monastery was attacked by Norsemen. Results were, erm, rather dire. After this terrifying attack, folks got to chatting and anytime a Scandinavian longboat was spotted, people bristled (understandably) and well, there you have it. Scandinavians however, only called themselves a Viking if they were off on an actual ‘viking,’ which meant, essentially, a trip. Sometimes those so-called vikings were violent raids but often, they were just trade trips that ended up with a bad reputation.

Having recently hit up the National History Museum in Reykjavík — and joined by my sister, who’s checked out what Oslo’s museums have to offer — I came armed with some pretty high expectations for Ottawa. With about 500 artifacts plucked from Stockholm’s Swedish History Museum for its purposes, here are my top five things to look out for when hitting up the exhibit. 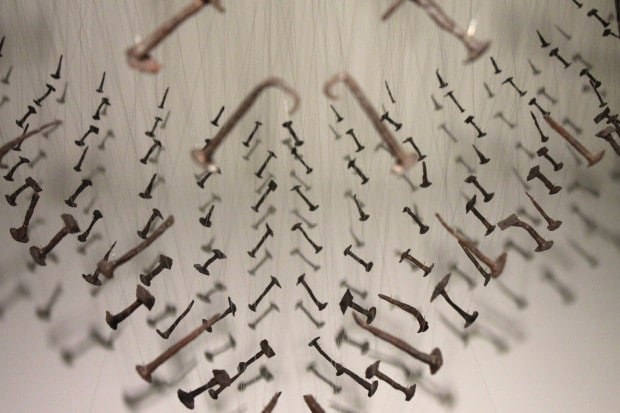 1) Ghost Ship: Probably the coolest display at the exhibit, a ghostly silhouette of a Viking ship was created by using nylon threads to suspend 291 original iron rivets. Each rivet has been positioned exactly as it was discovered by archaeologists; the wood had long rotted away. By measuring the precise distance from the ground level to its burial position, the rivets reveal the shape of an ancient ship. 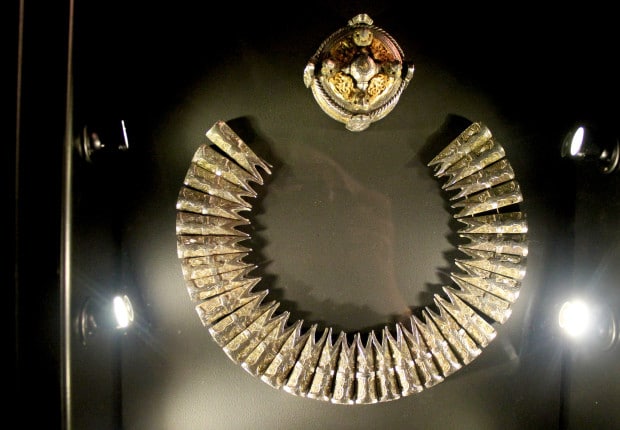 2) Set of Fishtailed Pendants and Brooch: I’m a real sucker for any kind of engraved metal jewellery (hello bracelets from northern Vietnam that never leave my wrists). These pendants from Gotland, Sweden — done in gold, silver and bronze — are impressive not only for the fine detailing of the crosses straddling them but also for their fishtail shape. Both elements are symbols of Christ, but what’s really interesting is that the boxy brooch — seriously, they loved a good brooch — found alongside the pendants is adorned with Old Norse symbols.

The pairing of the two indicates the mixing of religions, with Christianity tricking its influence out over Scandinavia during the Viking Age. Was the lady wearer torn between systems of belief? Or was she just taken with the symbols from the emerging Christian religion?

It’s worth noting that, in addition to donning impressive jewellery, Viking women were also sure to have the house key affixed at the waist as part of their outfit and as a status symbol. Women were rulers of the household, managing the finances and more. And if they decided their husband wasn’t all he was cut out to be, they could divorce him. Alas, I didn’t manage to get a decent photo of any keys. 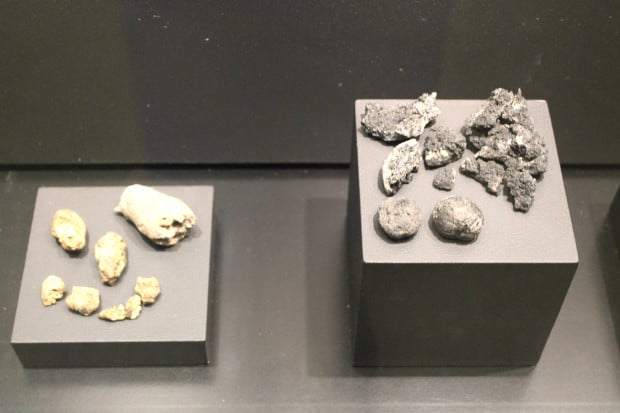 3) Coprolite: The archaeologists who discovered coprolite at Birka, Sweden — a key trading site — must have been pretty pumped. What is coprolite? Quite simply, it’s fossilized feces, of all things. Those on the dig also found household pots with eentsy particles of burned food, which let them piece together the diet of Viking Age folk. These samples indicate that oats and barley porridge were common foods; other written sources say that pork and wine were eaten by the rich.

Side note: last year a ‘For Allah’ inscription was found on a woman’s ring at the same site, proving that yes indeed, Birka was quite the trade site. 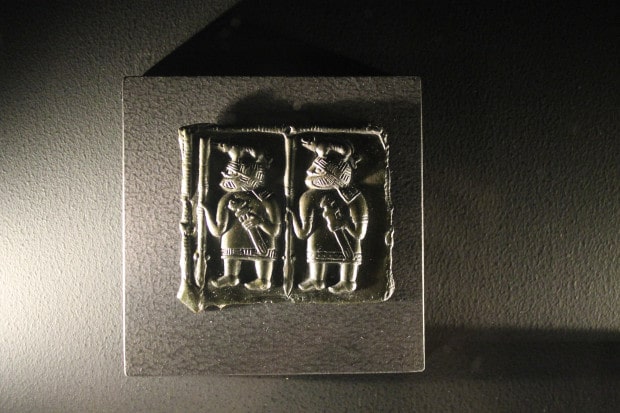 4) Hornless Helmets: Who knew, but for all those images with Vikings decked out in a horned helmet, helmets themselves are very rare. This means that debunking the myth is easier said than done. But any helmets that have been discovered do not — I repeat, do not — have any horned elements. Simple helmets do appear in carvings, tapestries and picture stores, like the above.

While the helmets may appear to be topped with horns, on closer inspection they’re actually revealed to be birds. It’s thought that this headgear was used for ceremonial use, not battle, though I’m sure it would be super easy to balance a bird on one’s head while attacking an enemy. Simple really. As for where that horned helmet came from, Richard Wagner’s opera, The Ring Cycle, was performed in 1876 and one of the evil characters wore a horned helmet, linking Norse mythology with helmets, horns and Vikings. Phew. 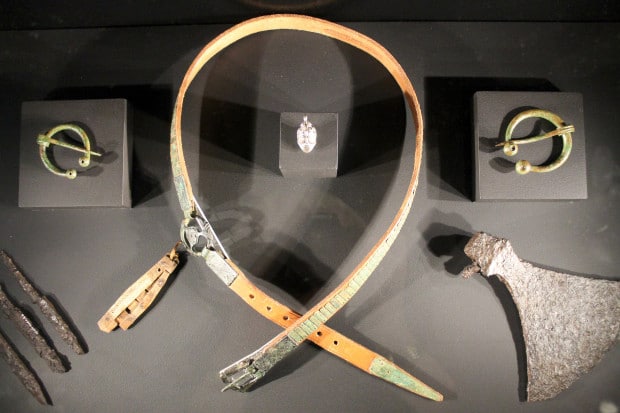 5) The Viking Man: One may have been led to believe the Viking man was a heathen, a beast of a man, unkempt, unshaven and with the table manner of a pig. Well, sure it’s a fun image, but it’s not quite the correct picture. As it turns out, Viking men were rather dapper, with waists cinched with smart belts and cloaks pinned with a pair of brooches (yes, you read that correctly). They tended not to carry weapons — since most were farmers — save for perhaps a knife or an axe. The main weapon of choice? A fine-toothed comb that dangled from the belt to ensure those strands were always kept in check. 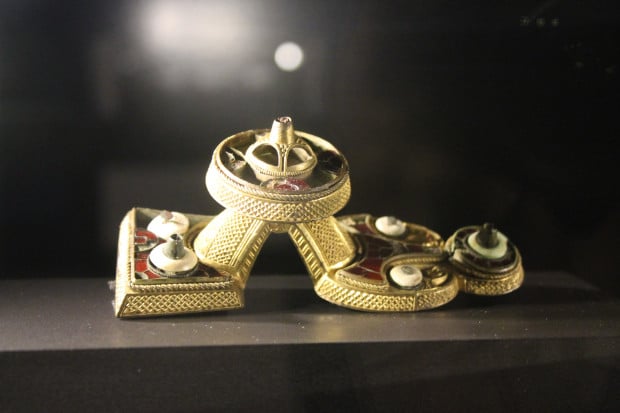 Bonus: Freyja’s button-on-bow brooch: Found in a grave in Hellvi, Sweden, this bronze, gold and garnet brooch may be interpreted as having belonged to the goddess Freyja. Goddess of battle and chief of the Valkyries, Freyja was also goddess of love and fertility (her slightly softer side). And yes, if one had to sum up the quintessential Viking accessory it would indeed be the brooch.

Vikings runs until April 17 at the Canadian Museum of History