I’m a huge fan of all things outer space. The out-of-this-world landscapes, oddball aliens, futuristic technology, and exploring places that are beyond our wildest dreams. After watching Valerian and the City of a Thousand Planets, my goal is now finding a way to live until the 28th century so I can experience it all for myself.

The film finds its inspiration from the French sci-fi comic series created by Pierre Christin and Jean-Claude Mézières that first published in 1967. It tells the story of Valérian, a spatio-temporal agent and his colleague/love interest Laureline as they travel through space and time. While it may not have been as widely known as some of the comic series that have gone mainstream since then, many would argue that it’s influence was deep all the same. With many similarities seen in such properties as Star Wars, Conan the Barbarian, and Independence Day, Christin and Mézières’ impact has certainly been felt. 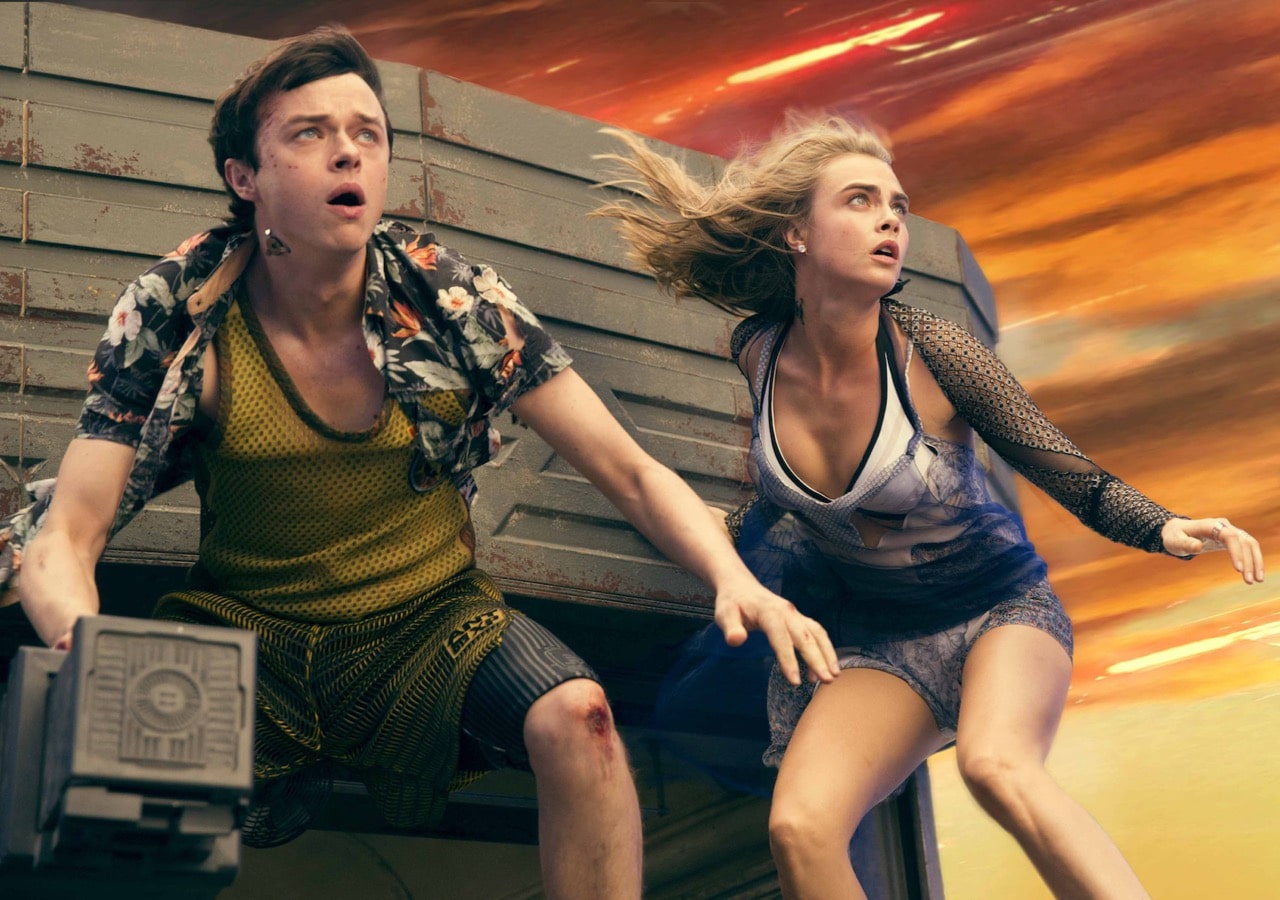 The movie version takes us on a ride through space to Alpha, an ever-expanding space station, where species from all over the universe have gathered over centuries to share knowledge, intelligence and cultures with each other. A mysterious force has taken over the core of the station and threatens the lives of all who live there and possibly the universe itself. It is up to Valerian and Laureline to solve the mystery and save the day.

The role of Valerian is played by Dane DeHaan (In Treatment, True Blood, Amazing Spider Man 2) who looks like a young Leonardo DiCaprio but has the voice of a seasoned Keanu Reeves. Valerian is an intelligent, kind, and brave agent with a colourful romantic past who follows orders even when he’s not sure it’s the right thing to do. He’s equally matched by partner and current love interest, Laureline, played by Cara Delevigne (Paper Towns, Suicide Squad). Laureline is equally intelligent and competent but also independent and understands that the world isn’t so black and white. She’s smart enough to know that, despite his promises of devotion to her, he might not be ready for the commitment she wants. 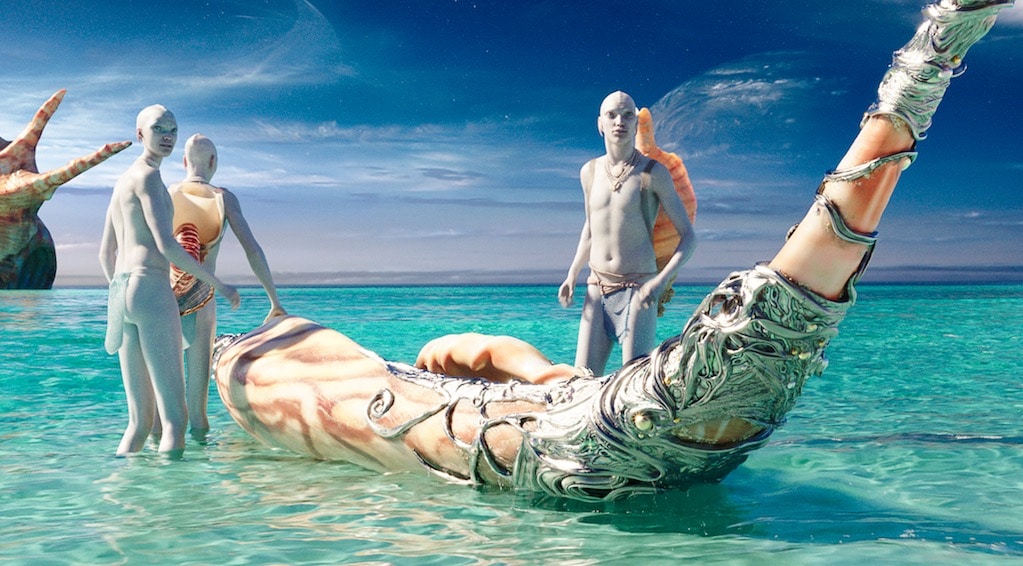 I enjoyed watching the chemistry between the two leads and the characters had a good balance in that they would take turns leading the film in order to save the other in a way that we don’t normally see. At times, however, the acting felt a little too subtle and I could have done with a bit more emotiveness from both. Their interactions are playful but you can tell, deep down, there is a genuine respect and admiration. By skipping the origins of how they met and dropping us right down into a pre-existing relationship, it provides more of a solid foundation which makes the banter more believable as was evidenced when they’re on a mission to an inter-dimensional market place and run into danger when the plan goes awry.

From the start I knew I was in for a treat visually as we learned about the history of the city of Alpha and how it came to be. It was a clever way to set the stage for the ensuing adventure as we progressed through centuries of development in a few minutes. This rich history would actually make a good TV series in the vein of Battlestar Galactica or Babylon 5. Throughout the rest of the film, Valerian and the City of a Thousand Planets continues to deliver on the promise of interesting visuals in a way that we’ve seen from director Luc Besson before in his groundbreaking film, The Fifth Element. 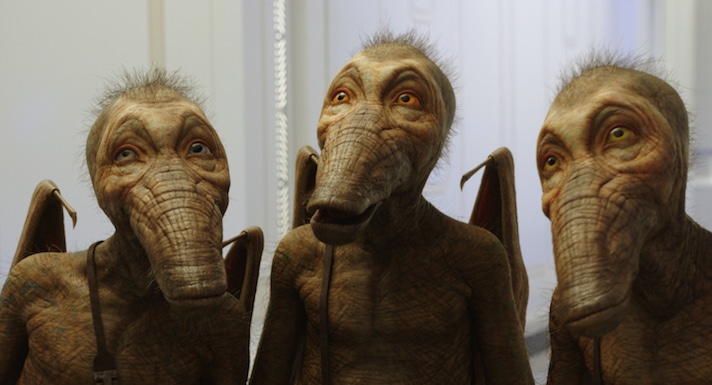 The universe in which the movie exists is an interesting one with so many different constellations, solar systems, and planets they could explore in followup films. With the Alpha space station playing home to so many different species, I would love to learn more about how the different aliens interact with each other. Doghan Daguis, a trio of small, talking, pterodactyl-looking creatures are reminiscent of some of our favourite Star Wars characters and act as a source of both humour and knowledge at various points throughout the film. They reminded me of Star Trek’s Ferengi or Star Wars’ R2D2 and C3PO. I’d love to see more interaction with them and find out if there are more of their kind out there and whether their quirky personalities are characteristic of their species.

R&B queen Rihanna makes a memorable appearance as the charming Bubbles, a creature with a unique ability that is struggling to keep herself from returning to a troubled life. At first, when I heard she was going to be in this movie, I was a little skeptical but having seen her work in the film, I found myself wanting more and I hope, somehow, she’ll find her way into the next film. This seemed to be a reoccurring theme as a few of the other big names (like John Goodman and Ethan Hawke) attached to the project seemed to have shorter on screen time than I would have thought which suggests that they are setting the stage for several films – a move that I wholeheartedly endorse.

As with all good science fiction stories, beneath the surface, there is a commentary on various societal issues and events and Valerian and the City of a Thousand Planets is no different. It starts out as a good versus evil story, lurking underneath, are more complicated layers in which the ideas of self-preservation and government corruption in the guise of acting for the greater good are examined. How does one decide when faced with the choice between saving your own species or the lives of another?

It is this question that provides the heart of the film. We see it examined and answered in various ways both on a personal level between the characters main protagonists, again with the supporting characters, and on a larger scale as Valerian and Laureline must make the decision about whether the needs of many outweigh the lives of a few.