People get tattoos for a multitude of reasons: religious and cultural customs, expression of identity, personal tributes, closure and healing, appreciation and passion for art, or even at times, the result of reckless behaviour after a few too many drinks (I can proudly say that I am not one of the latter…or at least, not yet). Whatever the reason, behind every tattoo, no matter the style, size or colour, lies a story – an artistic representation of a personal experience – some deeper and more meaningful than others.

Each of my tattoos is representative of a place in time that has influenced or shaped the person that I am today. For example, the olive tree on my left shoulder symbolizes not only where I spent seven months of my life for an unforgettable internship in 2006, but more importantly, where my dad was born in Italy: Bari, a province in the southern region of Puglia, known for its countryside roads surrounded by olive trees.

Similarly, the peregrine falcon on my upper right arm tells the tale of a creature who I was obsessed with throughout my childhood and more recently, developed a mystical connection with at a building I was living at in Toronto. With its wings outstretched across my shoulder, the bird of prey embodies my fleeing from the home nest of Vancouver to my current residence in Toronto. This storytelling across my body would have never been possible without the work of two creative masterminds: Vanessa Dong in Vancouver and Luis Santos of Imperial Tattoo on Dundas West in Toronto. 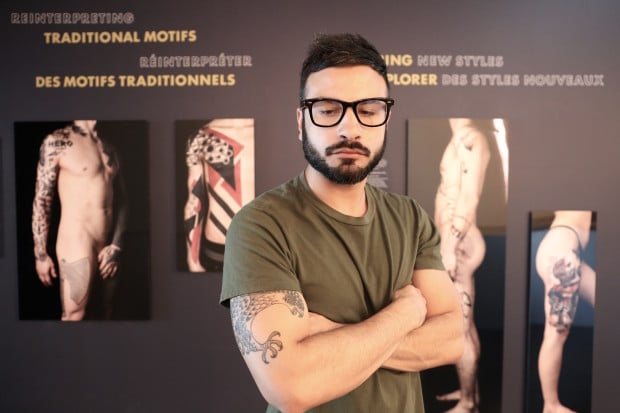 The latest exhibition at the Royal Ontario Museum, Tattoos: Ritual. Identity. Obsession. Art. dives into the complex world of tattooing through a graphic display of body art’s past and present, complete with prints, posters, tools, and 13 remarkable commissioned tattooed silicon body replicas by some of the world’s most renowned tattoo artists.

The original exhibition drew record crowds in Paris at the musée du quai Branly for almost two years from 2014 to 2015. Showcased now at the ROM are over 200 objects, including many lent from the quai Branly and private lenders across Europe. The exhibition, which runs at the ROM’s Roloff Beny Gallery from April 2 through to September 5, covers thousands of years of tattoo history from across the globe, investigating its international cultural importance over time. I found it to be both enlightening and irresistibly inspirational, a sure treat for not only other fellow tattoo lovers, but anyone with an appreciation for art and culture. 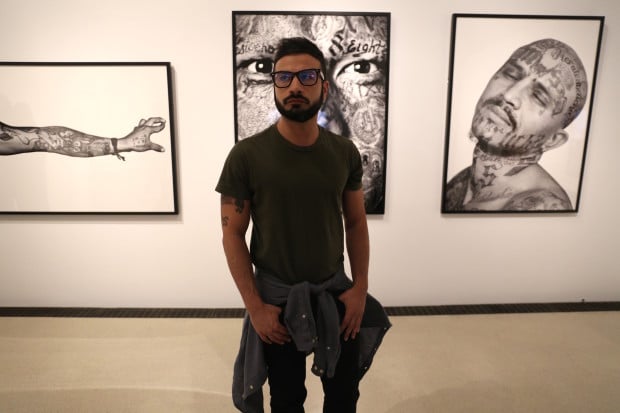 Compelling photographs depict the origins of Chicano tattooing (centred in East Los Angeles), among prisoners in jail where it originated as a way to identify gang members in an expression of faith, respect and loyalty to the gang. Today, it can now be found on the skin of many who have never spent time in prison. The classic themes come from the art of Hispanic neighbourhoods, religious figures of Catholicism, Mexican revolutionary idols, and pre-Columbian History. 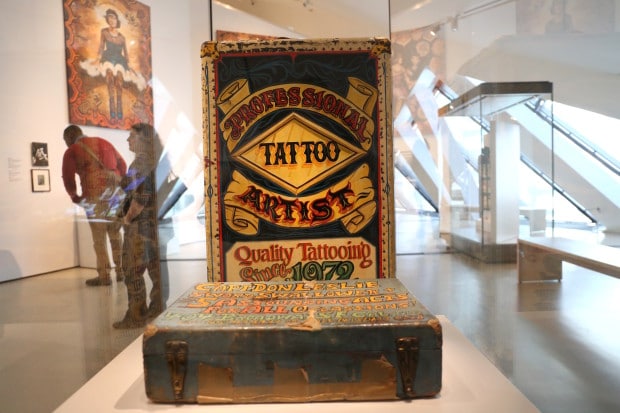 Among the many attention-grabbing artifacts in the exhibition is the trunk of a travelling tattoo artist. The trunk is representative of the early 1830s time period in North America, when tattoo artists travelled with sideshows throughout the summer. The sideshows would set up their caravans alongside traveling circuses with fairground attractions and an array of astonishing people. Way before exhibitions like this in the ROM existed; the sideshow was a means for fans like me to meet the spectacle of the tattooed body. 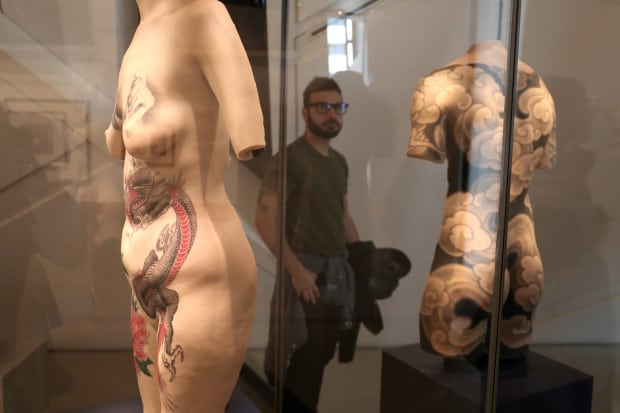 One of the 13 aforementioned tattooed silicone body parts on display is a commissioned work of art from the most famous of French tattoo artists, Tin-Tin. I found it intriguing to learn that he received his first tattooing equipment from Marcel, an iconic tattooist from Paris. Tin-Tin is respected for his trademark hyperrealist work, and for his prowess of the neo-Japanese style. 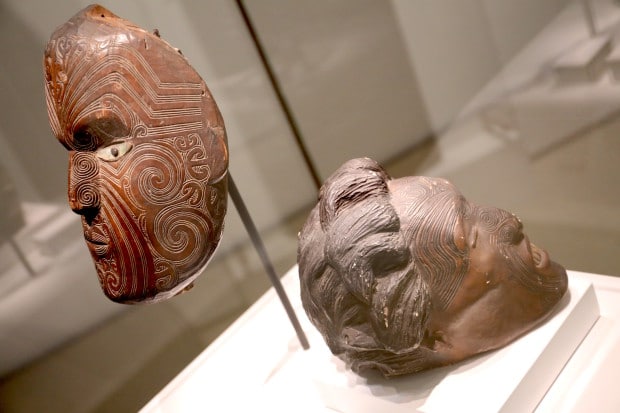 Having recently traveled to the Polynesian Islands for the first time, the collection of artwork, photographs and artifacts from New Zealand were enchanting. In New Zealand, traditional tattooing of the Māori people is called tā moko. The moko began as the ornament of chiefs and warriors, but in the 20th century, after the Europeans arrived, it evolved to facial tattoos on Māori women and gang members, who reproduced the former warrior “mask of defiance”. 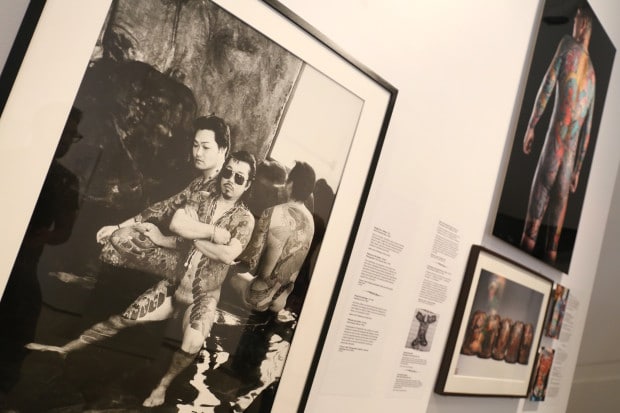 The exhibition includes a number of mesmerizing photographs of Japanese bodysuits that incorporate designs from nature, folklore and religion. While Japan has a long history of tattoos dating back all the way to the 17th century, tattooing has also experienced many bans and restrictions in the country due to its connection to the yakuza, organized criminal gangs, who often have extraordinary full body tattoos or bodysuits. This connotation remains strong even today, with some Japanese baths and spas prohibiting tattooed people from entering. There goes any hope I’ll be sweating it out at an onsen in Tokyo!