Now in its fourth year, the Toronto Urban Roots Festival provides music-lovers with the opportunity to fully enjoy the last gasps of summer. TURF’s laid-back atmosphere creates the sense of being far from the city, even while you can still glimpse the CN Tower and Gardiner over Fort York’s four stages.

The three-day lineup showcased a mix of big-name headliners like Ween and Death Cab for Cutie, and eclectic smaller acts including Margo Price and Matt Mays. In between shows, attendees enjoyed food from local food trucks, or browsed clothing and jewelry from indie vendors. The unpretentious vibe and diverse acts ensured that there was something for everyone: the expected twenty-something festival crowd danced enthusiastically alongside families with young children. 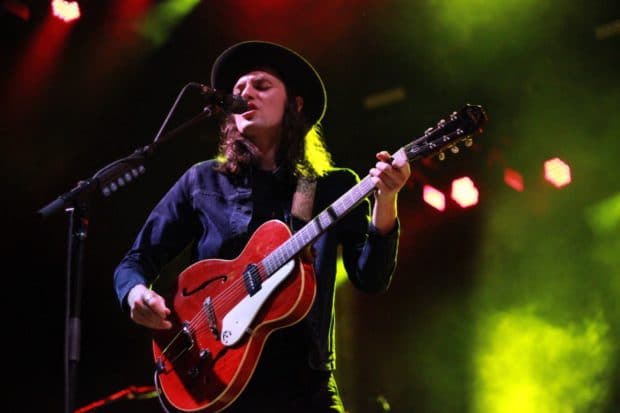 A visit from across the pond: James Bay

Attendance on the TURF grounds visibly picked up prior to British singer-songwriter James Bay’s headlining set on Friday. Several attendees commented that they had bought their ticket just to see him play. Bay’s quick rise to fame since he was discovered via YouTube is easy to understand, given his mature, well-crafted set and charismatic stage presence. Particularly impressive is Bay’s ability to convey the emotion and tenderness that characterizes his music, while still delivering an energetic, dynamic show- and the captivated audience was certainly entertained and moved in equal measure. 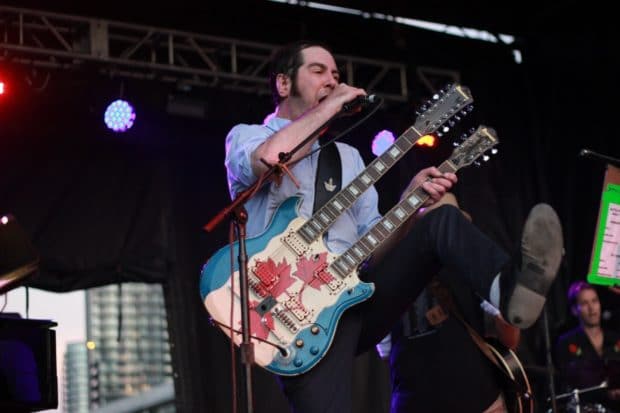 The Rheostatics, continuing what appears to be something of a reunion tour, again earned their place in Canadian indie rock history with a sometimes somber, sometimes silly set on Sunday night. Frontman Dave Bidini was ably backed by notable musicians such as keyboardist Kevin Hearn (who was also seen on Saturday night with Barenaked Ladies) and Toronto-based violinist Hugh Marsh, as well as the singular guitar tones of Martin Tielli. Bikini and company demonstrated their passion and quirky sense of humour throughout a set that included the driving working-class paean Horses and lighter songs like Monkeybird, which delighted younger members of the audience. While the range and variety of of material offered up by the band makes them a hard act to pin down, this energetic showing proved their ability to deliver an immersive musical experience. 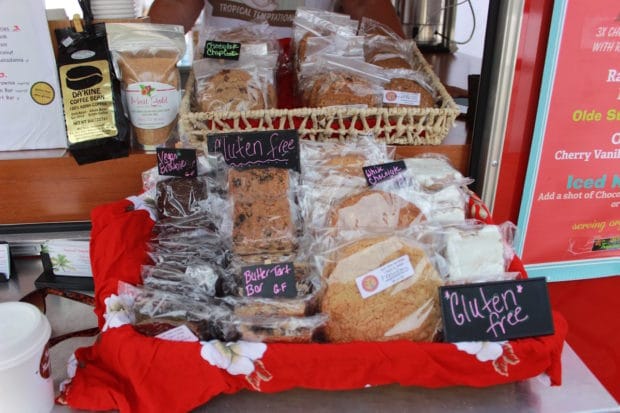 Food for the healthy festival-goer

Those looking for kale, however, were not disappointed. Healthy options were served up by Smoothe Operator, including the delicious kale quinoa salad and superfood smoothie. Organic Kona coffee was supplied by Tropical Temptation along with a an array of gluten-free, vegan-friendly baked goods. 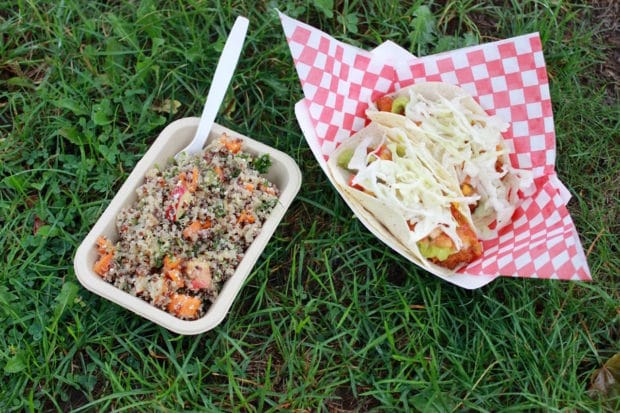 TURF has certainly stepped up its food game! With only a handful of food truck options in previous festival years, the explosion to 30 vendors this year means a huge array of options from local businesses. Toronto’s current love affair with tacos was apparent in the availability of everything from the outstanding fish tacos from 50 Pesos (featuring sriracha-battered cod and Ontario peaches) to the Indian tacos from Fine Chestnut Kitchen. 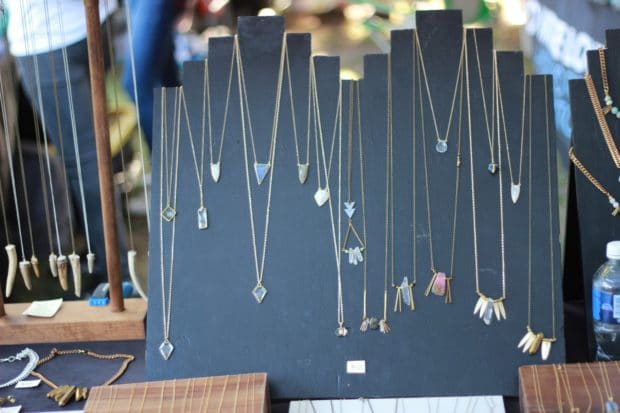 At the Fierce Deer booth, Toronto jewelry artist Kate Swan displayed her own jewelry creations as well as the option to create custom engravings and charm necklaces. Customers could pick out their own designs and return thirty minutes later for the finished product, which meant the unique opportunity to take home a tailor-made festival souvenir. 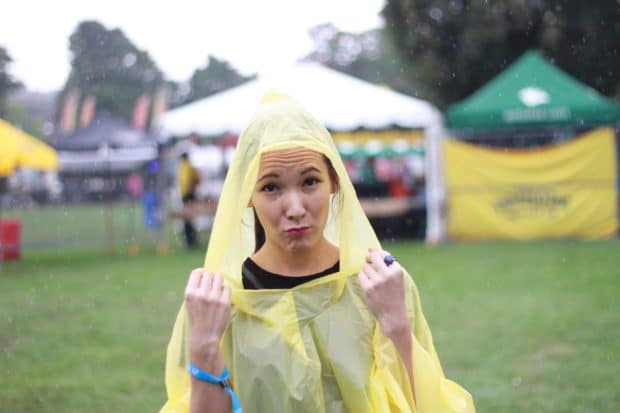 Summer music festivals were designed for great weather but beautiful sunshine isn’t always a guarantee. The grey skies opened up with a heavy downpour over the city on Saturday but TURF attendees soldiered on with gumboots and ponchos to catch acts like The Sheepdogs, Barenaked Ladies, The Sadies and headlining act Ween, which attracted a large and appreciative crowd. 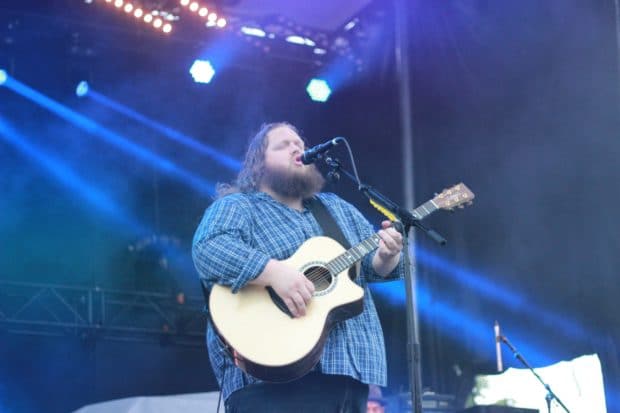 “Hello, poncho people!” Matt Andersen greeted the Saturday afternoon crowd. Despite the steady rain, the crowd for Andersen’s set was attentive and enthusiastic. The New Brunswick-born folk rocker offered up older repertoire as well as several songs from his newest album, Honest Man, and demonstrated masterful guitar skills along with a soulful but booming set of pipes. Andersen and his band displayed the perfect mix of tight musicianship and relaxed, playful stage interaction 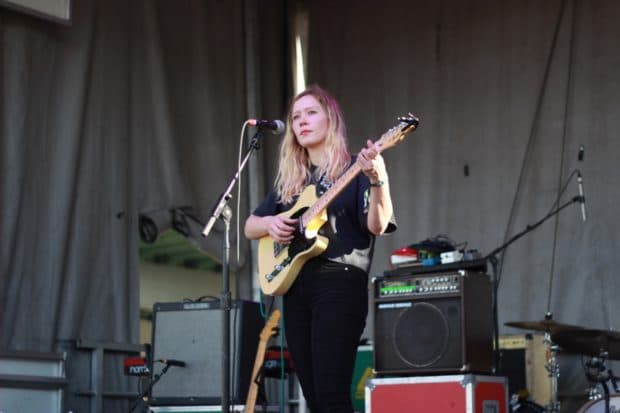 The sweet and ethereal vibe of New Zealand artist Julia Jacklin’s performance meshed perfectly with the lazy, sun-drowsy audience on Sunday afternoon. Jacklin played on the Rebellion Stage, a new addition to the venue’s layout slightly apart from the main grounds, and her reverb-soaked guitar melodies created a soothing haven within the rock-heavy lineup that dominated the larger stages. 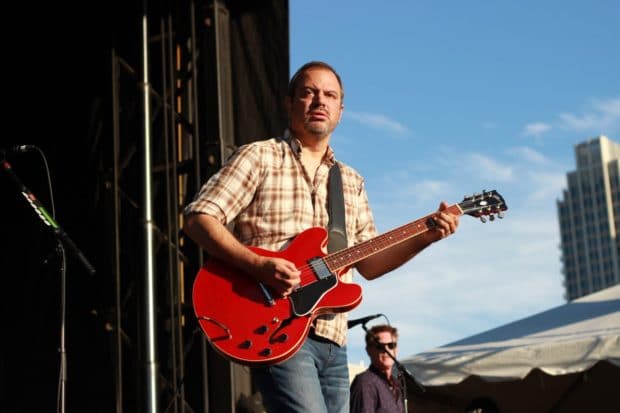 From the West Coast: Matthew Good

West coast musician Matt Good was warmly welcomed by the Sunday crowd. Good’s set displayed the passion and intensity that has characterized both his solo musical work and his personal brand of activism, but clearly showed how much he has grown as a musician since his status in the early 2000s as an alt-rock darling- in particular, his embrace of a more straightforward rock sound, which drove a balanced and energetic show. 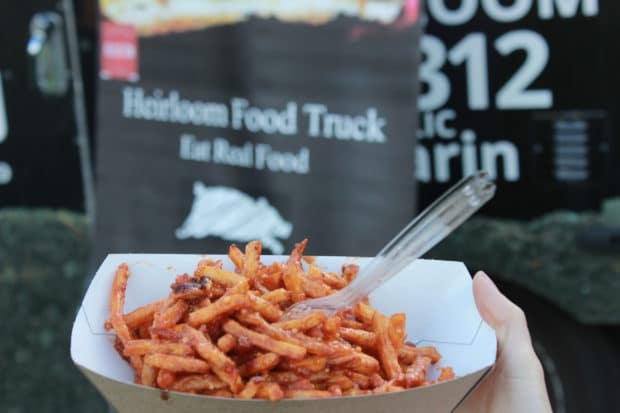 Heirloom Toronto knocked it out of the park with their small but well-crafted menu. Using high quality ingredients produced by local farmers, the Szechuan fries with artisan mustard and fried taco sandwich were the perfect blend of heartiness and sustainability.