I’ve been a fan of comics ever since I was a little kid. The comics I read varied as the years went by, but that love has never faded. There were army comics, super hero comics, gritty comics, and light-hearted comics. I went through phases where I liked young superheroes I could identify with to older ones I wanted to be like when I grew up. I liked those with god-like abilities but also those with no powers at all trying to navigate in a world of super abilities. I would spend hours with friends making up our own superheroes and acting them out or drawing and writing our own comics. Through all of this I learned that comics allow us to explore the best and worst parts of humanity but also create the heroes and qualities of greatness that inspire us to be better versions of ourselves. Comics allow the outsiders of the world escape to a place where it doesn’t matter that they’re different.

That’s where Fan Expo comes in. It’s a chance for those who march to the beat of a different drum to explore their passions and meet others of the same ilk. This year’s event was held at the Metro Toronto Convention Centre from Sept.1-4 and focused on comics, sci-fi, horror, anime, and gaming. The weekend was filled with costumes, collectibles, celebrity guest appearances, and panels. Some big names attended this year, a few even doing their final Canadian appearances, but all delivering some great insight, wisdom, and laughs.

Attendees of this Fan Expo came in all shapes, sizes and ages. Some were attending for the first time while others were experts and had been attending for years. Chris Houston, an exhibitor for DK Publishing had brought along his young son, and had a few conventions under own belt, “I’ve been attending comic conventions since the late 70s,” said Chris, “It’s been great watching Fan Expo evolve from an energetic fan run convention for comic book fans to Canada’s largest pop culture event. Indeed now one of the biggest in the world.” 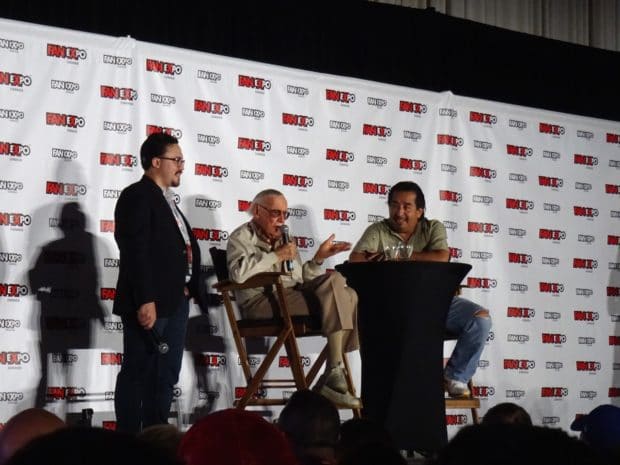 Stan Lee, the co-creator of many Marvel characters and a familiar face in the Marvel Cinematic Universe, was an absolute delight. Like someone’s funny grandparent, Lee was quick with the comments and jokes. He answered many questions posed by the audience covering topics like the television shows and movies based on his creations.

When asked about the casting of a biracial actress as the role of Mary Jane Watson (a traditionally Caucasian character), Lee’s response: “What’s the problem?”On the subject of his famous cameos: “I’ve even let people know, it doesn’t even have to be a Marvel movie. I told DC, they can use me!” One audience member asked him how DC could make a hit film. His advice: “Let me write it.” 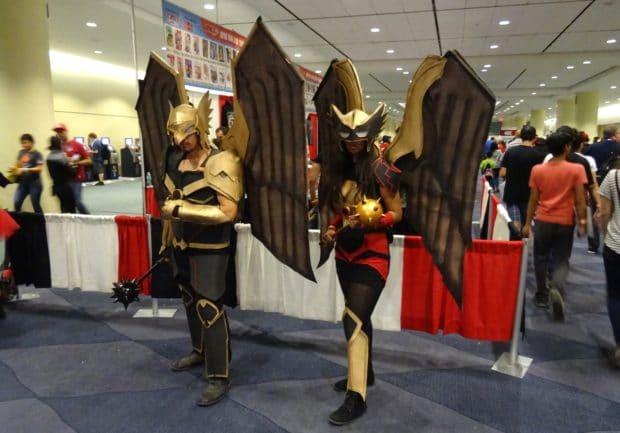 Cosplay costumes often make people’s lists of favourite things about attending any fan event. These elaborate outfits capture the creativity and imagination of those who grew up with a love of fantasy and science fiction. It’s an opportunity to create a new persona for yourself and celebrate being different with others who totally get you. Sometimes these outfits reflect current popular culture references while others are a little more obscure. What remains constant, however, is the painstaking effort and love that goes into crafting each one. Some put together their outfits in a week while others took many months. It’s truly amazing to see what people are capable of coming up with. 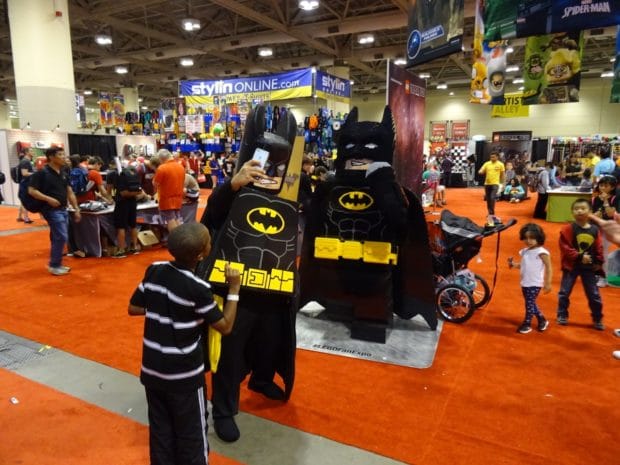 This year saw the first Lego installation at Toronto’s Fan Expo. In partnership with DK Publishing, LEGO Canada put on a Master Builder Event. There are only 8 Master LEGO Builders in the world and the large LEGO displays took anywhere from several days to 3 months to complete. The pieces also varied in the number of bricks used from 30,000 to over 50,000. LEGO fans of all ages even had the opportunity to contribute to a LEGO city all throughout the weekend. With a variety of giveaways, hands-on stations, and even a giant, life-sized robot built by a Master Builder with the help of Fan Expo goers, this exhibit was one of the largest and consistently filled with LEGO fans young and old. 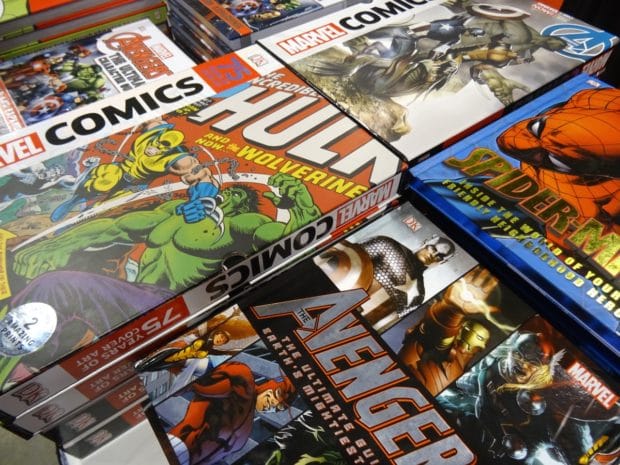 This is your one stop shop for everything fans need. One of the great things about Fan Expo is that they have so much stuff for collectors. From comics, to apparel, to toys, to figurines. Fan Expo has something for everyone. Looking for the rare comic book? Fan Expo has it. Need that missing Pop Vinyl figure for your collection? Fan Expo has it.

As part of their 7th year of exhibiting, DK Publishing had a booth filled with books of all kinds. “Our motto is Made by Fans for Fans and Fan Expo is tailor-made for our purposes to bring the very best in comic / sci fi reference titles,” said DK’s Chris Houston. With 43 titles this year that had never been seen at Fan Expo before, the Expo saw the Canadian launch of Star Wars Year by Year and the LEGO Nexo Knights: Book of Knights alongside Marvel: Everything You Need To Know. 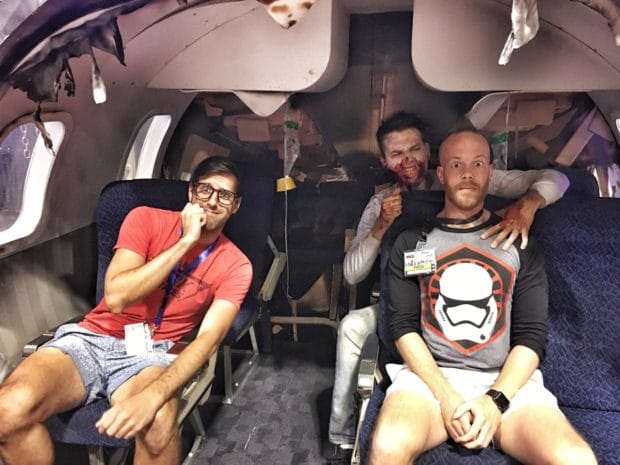 One of the great aspects of any convention are the interactive exhibits featuring new products, games, movies and television shows that allow visitors to immerse themselves in their favourite content. These booths were a big draw for fans and often had the most people lined up, eager to take part. The Power Puff Girls booth offered several free gifts and had one of the longest line ups save maybe the video game ones which offered people the chance to take a crack at newly released games. One of my particular favourites was the Fear the Walking Dead booth where they had a replica of a crashed plane complete with a real life zombie. 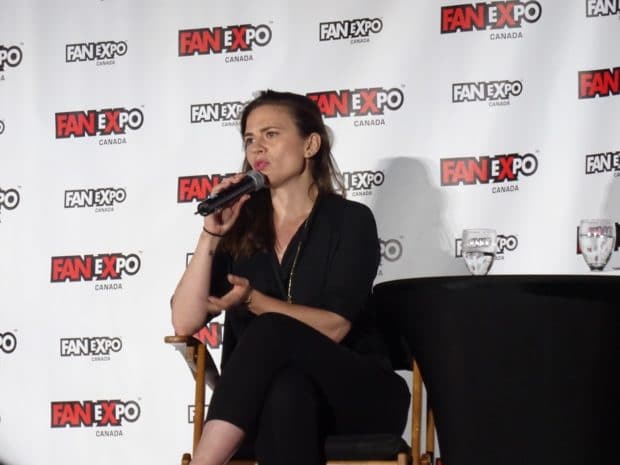 ABC’s Agent Carter herself, Hayley Atwell, was very relatable and humble despite her successful career. She provided a behind the scenes look at television and movies and talked about working with the cast of Agent Carter and even with Captain America’s Chris Evans. She had some great advice and stories about her life before and after becoming an actress and where her career is going next.

Having touched on her being bullied in high school, Atwell’s advice was simply “Embrace your weird. Learning to love yourself is the greatest silent revolution.” Something that really resonated with this audience. When asked if she would be willing to play the character of Peggy Carter again, Atwell responded, “I would love to… This is a team of people, we really love each other, and we just want to work together again in whatever medium it is whether it’s a tv or film spinoff so we’d jump at the chance.” 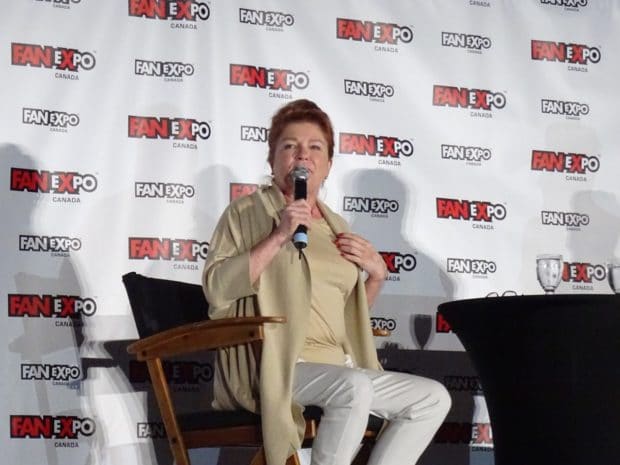 Breaking out of Litchfield for the day the crowd was treated to a truly entertaining hour with Star Trek Voyager Captain, Kate Mulgrew. Some might know her better from Netflix’s Orange Is The New Black in the role of the fierce Russian, Red. Mulgrew was funny, engaging, and she worked the stage and crowd with a finesse that comes from her time as a theatre actress.

On Orange is the New Black, “It’s an exploration of all issues most topical right now… [Series creator Jenji Kohan] really wants you to understand the beauty of human nature that lies in its fracturedness as well as its complexity. And that’s what I think Orange is all about and why it has so captured the imagination of its audience.”

On pioneering how women are perceived on stage and screen, “At that time, that was really tough going. I was the first female captain. To bring a woman in was a frightening prospect. So they tried in a myriad of ways to enhance and diminish my femininity at the same time… Finally I went to Greg Berman… Let me tell you something about Star Trek that I believe is true. What they love is someone who understands command… They don’t want to constantly be faced with my femininity. What they want to be revealed to them is my ability to command this ship!” 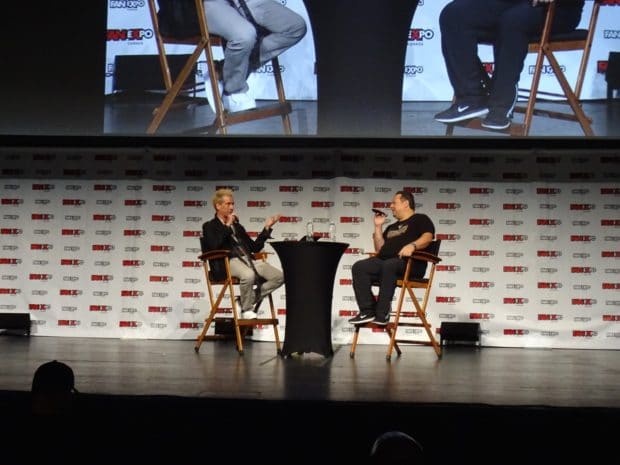 Marvel’s Chief Creative Officer, Joe Quesada was a great chance to get some insight into the thinking and decisions made by Marvel Entertainment across their entire line up from comics, to television, to films. An artist who got formerly worked on comics for both DC and Marvel, Quesada took on the lead creative role at Marvel in 2010. He covered discovering new talent, managing creative teams, and working with Netflix to bring comic characters to life. 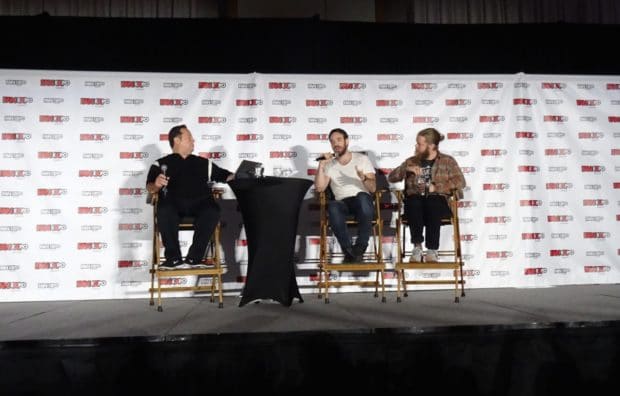 Without a doubt the most popular of the all the panels offered this weekend, at 28,000 square feet and seating 3,400, the completely packed Constitution Hall played home to the Q&A with Netflix’s Daredevil himself, Charlie Cox and his best friend, Foggy Nelson (played by Elden Henson). The line-up for this one was long, but judging by the response from the crowds, totally worth it.

“When doing any sort of film or play or particular a tv show.. in order to do work on a consistent basis you need to feel like you can trust… One of the things that Elden and I have is an open dialogue. So if we want to try something, there’s no ego around it… I think it makes the work much better.” Says Cox on work with Henson. One of the best questions of the session came from Hayden, the young man dressed as Spider-man, when he enquired about the Captain America Civil War movie and which side their characters would fall on. Both were definitely #TeamCap. 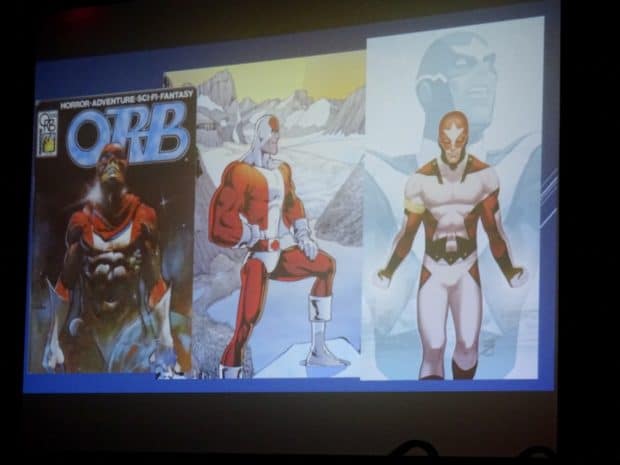 You may not be aware but 2016 marks the 75 anniversary of Canadian Comics. This panel explored the history of comics from the Canadian perspective. The final panel of the 2016 Fan Expo featured various writers, artist, and creators who have been involved with the Canadian comic scene over the years. This session was filled with many interesting facts: