Alexander Payne’s Downsizing is sure to be one of the most buzzed about films at TIFF. I left the screening feeling as though I’d just watched Jurassic Park (without the dinosaurs of course). The futuristic film shares once again how the world can quickly transform when a major scientific breakthrough is revealed. And while we don’t see anyone running in horror from T-Rex’s at a dino zoo…the films paramount scientific discovery sets the scene for a mind-bending ride where audience members throw themselves into an almost-believable magical world.

The story begins in Bergen, moments after a Norwegian scientist discovers how to safely shrink humans so they can live their lives out as tiny. The revelation shocks the world, immediately offering an eco-friendly option to reduce the consumption of Earth’s fragile resources. “We can now shrink human beings down to the height of a hot dog, and that one hot dog can feed a human for a week.” 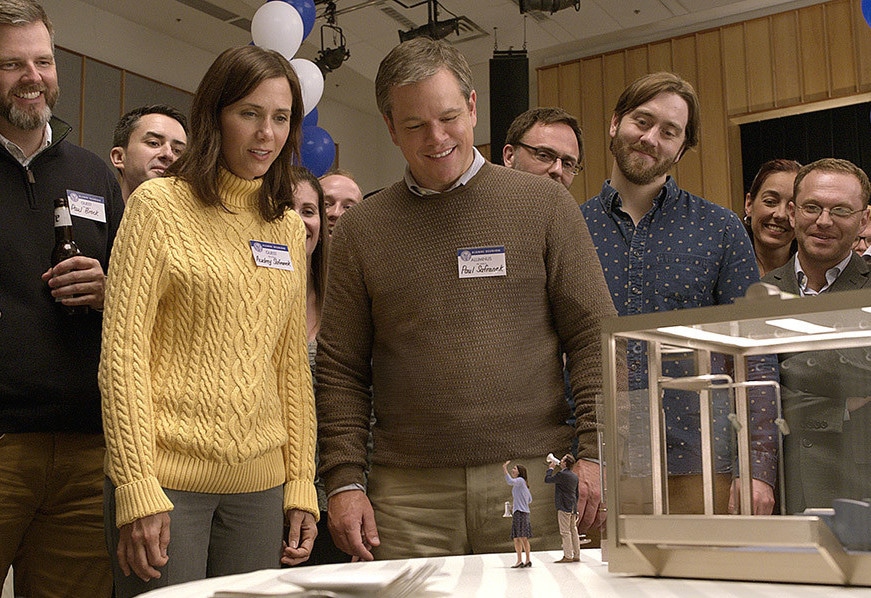 Matt Damon plays an average everyman trying, like so many Americans, to get by in a tough economy. For him and his wife (Kristen Wiig), life’s material desires seem forever out of reach (which will resonate with millennials hoping to buy a property in Toronto). As those around them realize that miniaturization is not just a solution to resource depletion, but also a way to get rich, they begin to contemplate living in a mansion the size of a dollhouse. After experiencing Luxury Lands time-share-esque sales pitch they realize they can sell their shabby bungalow and live out the rest of their lives as millionaires (just think of the savings we’d all enjoy consuming thimbles full of champagne and riding around in luxurious toy cars the size of a shoe?)

The film takes a poignant turn almost immediately after Damon steps foot into his decadent doll house. It seems the idyllic life that Luxury Land has been selling is no more perfect than the real world. Humans, whether big or small, seem to f-up the communities they live by getting greedy or using science in destructive ways.

Damon quickly learns that his newfound utopia is rife with inequality after he takes a trip with his Vietnamese cleaning lady to visit her sick friend. He learns that she was downsized against her will (a punishment by the Vietnamese government for protesting) and arrived into America as a tiny refugee stowed away in a TVs cardboard box. Damon’s life takes a turn when he happens upon “the projects,” a makeshift community where thousands live in squalor in broken-down trailers hidden away, just outside the golden gates of Luxury Land.

Downsizing is a spectacular sci-fi film which will have your mind constantly spinning in circles. Transfixed by the potential of a faux groundbreaking scientific discovery, yet tormented by the realization that even in a “perfect world” people suffer out of sight.