There’s nothing I love more about living in Toronto than being able to go out on any given night and experience incredible live music. Since moving here from Calgary in 2007, I’ve tried to take in as much live music as humanly possible, whether that be a favourite act touring through or the incredible variety of local musicians who play on the regular here at home.

This weekend I checked out Camp Wavelength, put on by Wavelength Music at Artscape Gibraltar Point on the beautiful Toronto Islands. Wavelength Music itself is a non-profit arts organization and a curated concerted series based in Toronto. Since its inception in 2000, Wavelength Music, whose focus is to “champion creativity, cooperation and collaboration in the independent music and arts scenes”, has made a significant imprint on Toronto, and has alumni (which have done okay for themselves) including, Arcade Fire, Broken Social Scene, Peaches and Jazz Cartier. 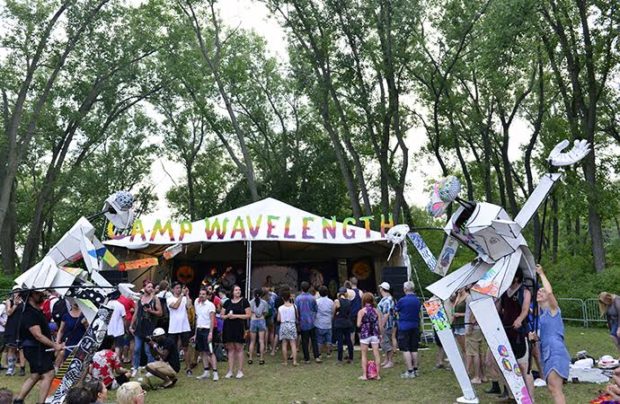 Out of all of the shows Wavelength puts on throughout the year, which includes a monthly series and Wavelength Music Festival’ held in February, Camp Wavelength has become its marquee event. Going to festivals can sometimes be a tiresome experience, as you try to pack in as much as you can. However, as one attendee put it, “most festivals feel like marathons, but this feels like you’re going down a lazy river.”

Going into its second year, and being Toronto’s only festival-camping experience, Camp Wavelength, is an oasis for people to combine their love of nature, with their passion for independent music. “It presents a real community-based alternative to commercial music festivals, one where the artists and community are placed front and centre” says Wavelength Artistic Director Johnny Dovercourt adding that, “It’s also important in Toronto, which can be such a busy, suffocating city, to create and environment where people can really escape from everything. You’re still in the city but it feels like you’re a million miles away.” 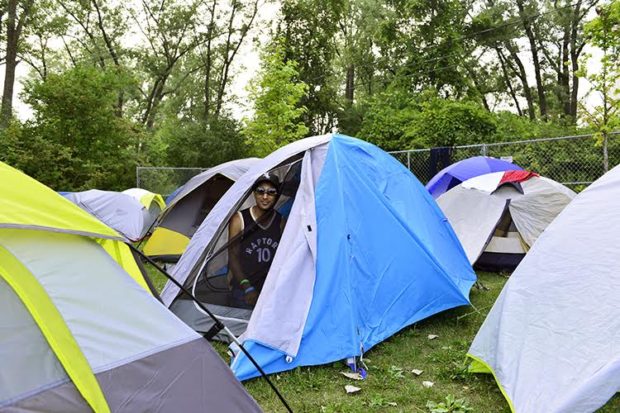 Camp Wavelength attendees have the option of buying a camping pass, allowing you to sleep under the stars with your friends on the Island. I never grew up camping, it wasn’t something my family did when I was a kid as my parents were immigrants and figured, “we worked hard to get to this country and buy a house, why would we spend any time in a tent?”

So as you might imagine I’m a bit useless when it comes to outdoorsy stuff, and definitely didn’t have any camping gear on hand. Over the weekend I had the opportunity to test drive Mountain Hardwear’s Optic 2.5 giving me the chance to experience a rural retreat in the heart of Canada’s largest city. Winner of the Backpacker Editor’s 2014 Choice Award, Mountain Hardware’s Optic tent offers a new twist on traditional camping featuring full-size doors on adjacent sides that zip away to create an open 180 degree vista. 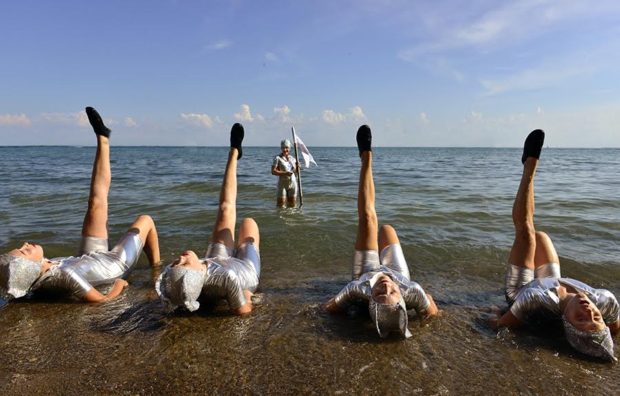 Who needs the Olympics in Rio to get a dose of synchronized swimming? In fact, this weekend you had to look no further than an amateur synchronized swim team based out of Lake Ontario called, ‘In Synch’. A favourite of many at the inaugural Camp Wavelength in 2015, ‘In Synch’ are inspired by the movement and costuming of competitive synchronized swimmers. In their shiny silver swimwear and amazing bling’d out hats, ‘In Synch’ left the crowd in awe throughout their performance. 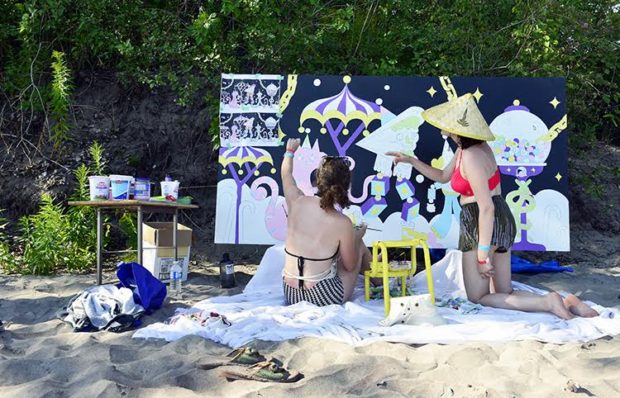 After getting to Camp Wavelength on Friday afternoon, I immediately hit the beach. A live painting session caught my eye. I spoke with the artist Mairen Doyle, who was working on the painting entitled, ‘Candy Dreams’, an acrylic painting on crezon plywood. Mairen, who responded to a submission call put out for visual artists for the festival, felt that her painting represented the eclectic nature of Camp Wavelength. 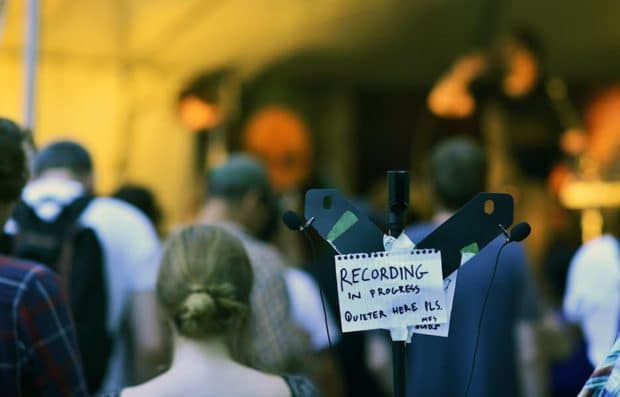 Yes this is the name of a man, a festival attendee but also someone doing something very special in the city. Anytime I see Joe at a show or a festival, I brim with joy because of the work he does. Joe is an archivist for local music culture. So what does that mean exactly? Well, he basically goes to shows around the city and records the set(s) and posts them on his blog, Mechanical Forest Sound. For Joe the noble importance of archiving is for the, “investigation of a wide range of artists, reflecting on concerts as shared experiences, acts of citizenship and to get down.” 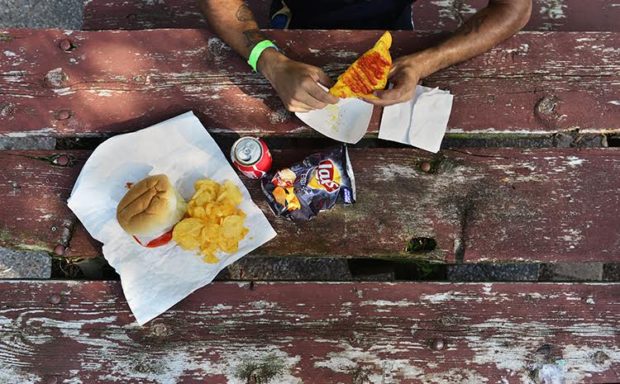 The food served at festivals seems to be more important than ever, and for some people a huge part of the draw. Gone are the days where our only option was Pizza Pizza! This year Camp Wavelength partnered with several vendors and I was able to get my fill of delicious bites. The Food Dude’s, who pride themselves on using locally grown and all natural products, would give any purveyor of grilled cheese a run for their money. With soft Brie, Grana Padana and Cheddar, on a brioche bun covered in compound butter and topped with smoked tomato ketchup, this masterpiece brought a tear to my eye. I also tried a massive homemade local grass-fed burger from Island Café. Even though I could barely finish it, I didn’t want it to end. 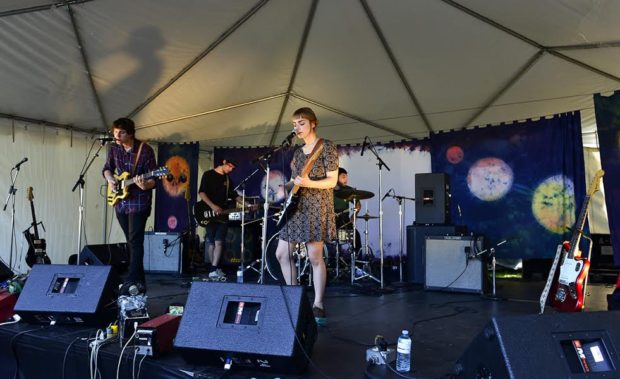 One of the newest offerings from my favourite Toronto label, Buzz Records, Casper Skulls was a band I’d heard of but hadn’t checked out yet. In a definite, “better late than never” situation, they blew me away. The band effortlessly ripped through their set of gritty garage-rock, as the crowd shook themselves around. For a band that formed less than a year ago, they definitely are locked into something really cool, and with a strength behind songs like, “Mink Coats” Casper Skulls are a Toronto band you should be hearing more about in the very near future. 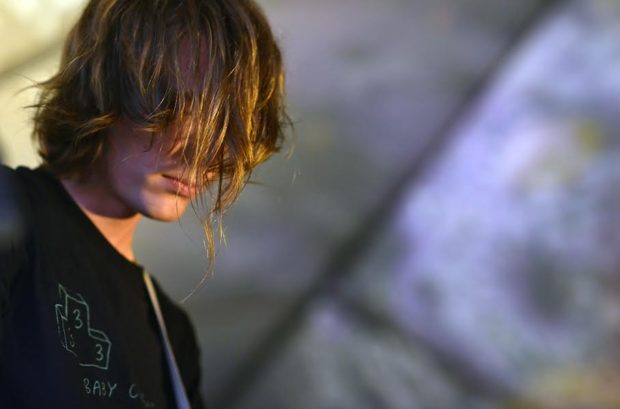 Fresh off their new record, Post Plague which they released in June, Odonis Odonis unleashed a set of heavy, industrial beats on the crowd, making an impact with every jarring moment. Unsettling and nightmarish in the best way, the new direction of their sound may have thrown some people, as they have typically played heavy music, but not of this ilk. Their engaging and entertaining set was also unrelenting, and something that was probably hard for the Earth of the Island itself to contain. A moment of darkness to break up a bright day. 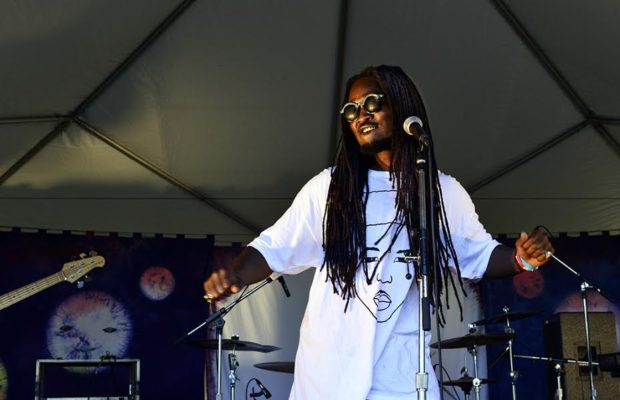 On the opposite end of the spectrum from the dark and heavy offerings of Odonis Odonis, was Spek Won, another act I had never had the chance to check out. The set was presented by Manifesto, a hip-hop culture focused, “non-profit, youth-powered platform designed to put local artists on the map and unite, inspire and empower diverse communities of young people through arts and culture, year round.” The jazzy hip-hop of this Toronto emcee/producer oozes positivity. Along with a solid backing band, Spek Won had the crowd swaying around to songs like, “Black Body” from his solid 2015 debut, ‘Sofa King Amazing’ and as far as the set goes, it was. 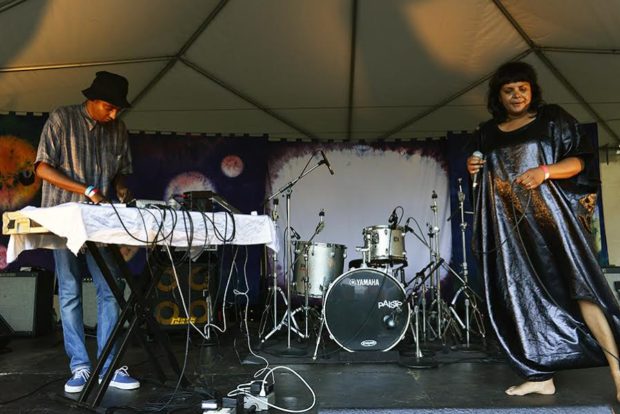 I didn’t know what to expect with Toronto’s two-piece LAL. I had heard chatter before their set about how amazing they are so I figured I had to check them out. LAL had everyone’s attention. In a world where people often keep their opinions to themselves, and don’t use their available platforms to really make a statement, it was refreshing to see lead singer Rosina Kazi unabashedly take the stage and often talk bluntly about important issues such as race, gender and general inclusivity. At one point telling the crowd to look around and see who wasn’t there (at Camp Wavelength) and invite them in. They also made reference in support of the important Black Lives Matter movement. It’s always interesting to hear danceable music with a socially conscious and political message, but in the case of LAL, they make it work. 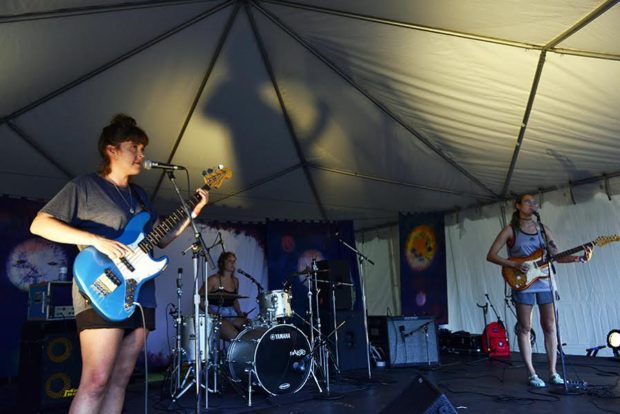 Moss and Lime are two really fun words to say so it’s perhaps appropriate that a band called Moss Lime would embody the three letter word. I didn’t know much about this Montreal based post-punk trio, but what I did know going into their set intrigued me. Moss Lime, comprised of two step sisters and a third member, formed in 2014, learned how to play instruments through a couple of instructional videos and within a few months released an EP. Fast-forward a couple of years and the trio look like they’ve been playing music throughout their lives rather than the past couple of years. There are a lot of bands emerging who are writing hazy stoner rock/pop, but Moss Lime are definitely one of the bands actually doing it well, and with songs like, “Dream Boat” it’s hard to disagree.