Toronto’s Distillery District is a national Historic Site and represents the largest and best preserved collection of Victorian Industrial Architecture in North America. Formerly known as The Gooderham and Worts Distillery, the facility played an important role in the growth and wealth of both the city and nation.

Last night as I walked through the cobblestoned East End hood in search of the Young Centre of the Performing Arts I was excited to check out my first show at Soulpepper. Inside, the theatre’s cool industrial vibe perfectly matched the atmosphere of the community. One could feel the anticipation of those waiting to watch the return of Jitters. Years after its initial revival, I was getting my first taste of what this Canadian backstage comedy is all about. 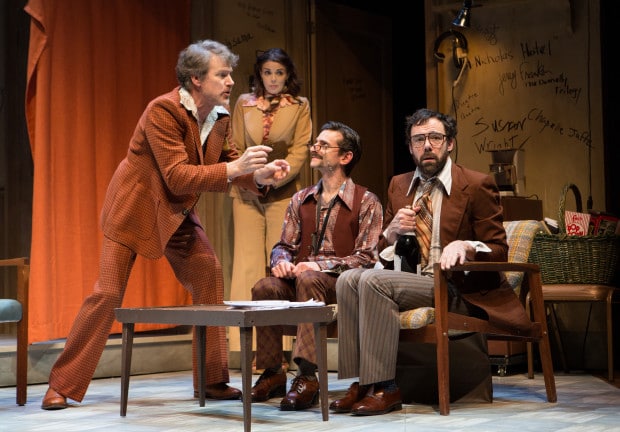 Backstage comedies are a unique experience to those who have worked and lived within the theatre community. We have been the actor whose cue never arrives, the director whose cast won’t hit their marks, or the stage manager who will give you to the count of five to get off the damn stage.

I fell in love with being on stage ever since my first one-act show. Ironically enough, it too was a backstage comedy – The Audition, a show about a group of students who desperately want to make it big in their school production of A Chorus Line. Since then, I’ve acted in everything from Canadian dark comedies to Greek tragedies. And through it all, I’ve seen everything from wardrobe malfunctions to actors carrying a scene forward despite a major prop (by major, I mean a dead body) not being on stage. Between you and me, we deal with and navigate through these mishaps more than we like to let on, all while keeping the audience none the wiser. So watching the insane trials and difficulties for these characters play out is a little extra humorous for me. 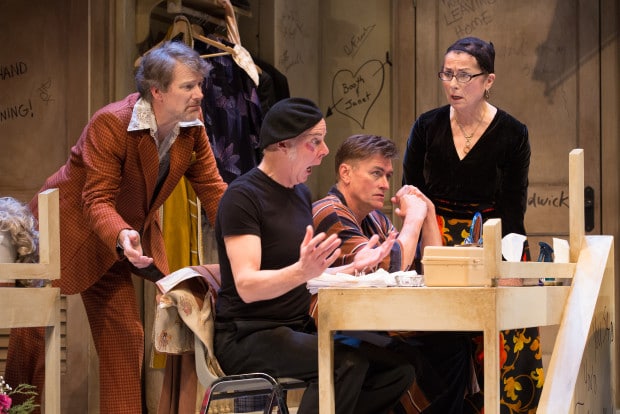 But you don’t have to be an industry insider to enjoy and laugh unabashedly at this spot-on comedy. On its own, Jitters connects to all of us who have come to understand the phrase “what can happen, will happen” – or probably more accurately for these characters, “when it rains, it bloody pours.”

While the show takes its time to pick up, by the end of the first act everyone was howling in their seats. The show hilariously explores what can result out of sheer dedication combined with a little bit of hope whilst in the face of adversity. Through incredibly witty writing from David French, and a strong delivery from the cast, Jitters has its audience laughing every (mis)step of the way.

The cast all around gave shining performances that matched the play’s over-the-top comedy. Oliver Dennis, as Phil Mastorakis, the high strung actor who lacks both confidence and properly fitting shoes, effortlessly captured the audience’s attention whenever he was on stage, and hilariously navigated the character’s ongoing plights. And the physical comedy by Mike Ross, who portrays the production’s nervous playwright, was easily the highlight of the comedy-rich second act.

While the finale didn’t quite match up to the two acts preceding it, I walked out of the theatre feeling satisfied. Through farce, wit and humorous irony, Jitters managed to bring out a belly full of laughs and a new meaning to the phrase “the show must go on”.

Jitters is a production by Soulpepper, and is playing at the Young Centre until April 15, 2016.