I confess September is my favourite month of the year. The trees in my west end ‘hood are a mashup of colour, farmers’ markets stacked high with fat ripe tomatoes and corn and peppers, and Fall’s bumper crop of great books has arrived on my desk. 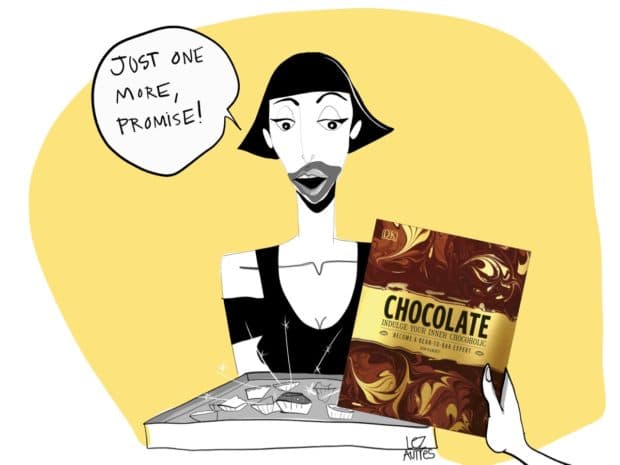 ‘Fess up; you know you’re an addict. We all are. Chocolate is just the best I-Need-A-Hug at the end of a terrible no good day, ever. But I betcha don’t know that not all chocolate is created equal.

This totally drool-worthy exploration of everyone’s fave treat is a Chocolate Bible, an at-home seminar that will make you the equivalent of a chocolate sommelier.

Did you know that chocolate was consumed as a bitter spiced drink for thousands of years until the mid-1800s when J. S Fry & Sons introduced the world to the chocolate bar? The earliest-known evidence of cacao consumption was found in Paso de la Amada in Mexico. Thanks – I guess – to European conquerors, the crop was introduced in countries around the world and today is grown pretty much everywhere that offers a hot, humid environment.

Chocolate (DK Publishing, 2016) takes you on a chocolate road trip, tracing the bean’s journey around the globe, showing you with beautiful pictures and illustrations how the beans become bars (it’s complicated!), how to choose the finest varieties, the signs of quality versus why-waste-the-calories, and how to decode the label – cocoa percentages, bean origin, certification and list of ingredients super-count. And how about this: a pairing guide showing which chocolate flavour pairs best with which wines, beers, fruit and cheeses. See I told you: chocolate sommelier.

Twenty step-by-step recipes contributed by the world’s best chocolatiers invite you to create your own craft confectionary including truffles (wild garlic anyone?), soufflés, cakes, brioche, macarons . . . I need to say, though, the recipe that really caught my attention: Brownie Pudding with Sea-salt Caramel, Tea and Figs. It doesn’t look that complicated and I’m pretty sure will earn me the Best Guest Ever Award if I bring it to Thanksgiving dinner. Beats pumpkin pie, dontcha think? 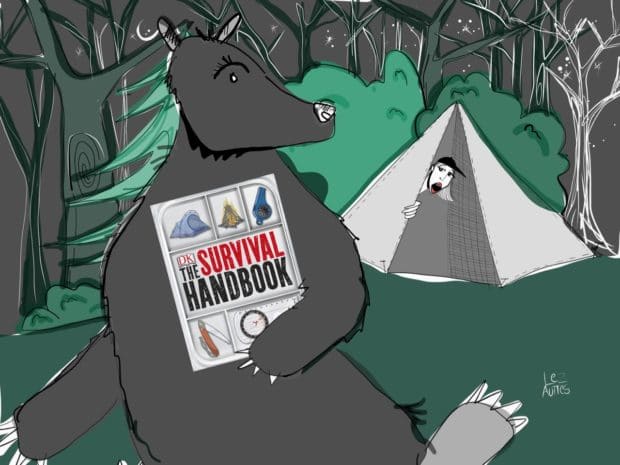 OK in the event that you’re planning one last camping trip, a hiking weekend or maybe just want to be prepared for the next Snowmageddon, you need a copy of DK’s The Survival Handbook. Seriously.

Written by a military survival specialist, this is a compact, nicely-illustrated guide to surviving pretty much any disaster from what to do if you come face to face with Smokey (pepper spray) to swimming into a shark on your winter vacay (aggressively strike its eyes or gills). Plus, it offers lots of practical everyday tips especially if you’re an outdoorsy sort, you know, camper, hiker, skier . . . stuff I know very little about: how to make an outdoor shower (go figure, all you need is a metal or plastic container, penknife and 60 cm of cord), navigating without a compass, what to pack in your first aid kit (news to me: two triangular bandages you can turn into a sling) and more.

Each chapter serves up crazy survival stories: what happened, who survived and what they did to see another sunrise. Aaron Ralston was hiking in the Blue John Canyon, Utah, when he dislodged a 363 km boulder that pinned his right arm. Five days later, he was pretty sure no one was coming for him so amputated his arm with his knife, applied a tourniquet and hiked off to safety. True story.

The Survival Handbook is usefully knapsack-sized to take with you so you’re prepared for whatever Mother Nature delivers (and she can be cranky) and bonus, it comes packaged in an awesome gift – its own honest-to-goodness mess kit. 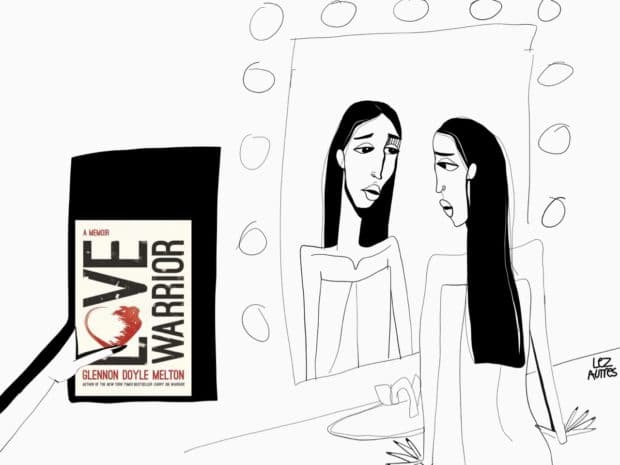 Glennon Doyle Melton, writer, speaker, activist, founder of momastery.com and author of the New York Times best-selling memoir Carry On, Warrior, thought she had life pretty much by the tail: three great kids, a husband who loved her, a successful career as a writer. Well, she was wrong. When Craig tells her he has been cheating, and that furthermore, he thinks their marriage is a sham, she hits her life’s second rock bottom.

Melton’s a recovering alcoholic and bulimic so rock bottom is a place she knows well. But she also knows that if she faces her deepest pain square on, refusing to settle for good enough, she will find her path to a richer and more authentic life.

Love Warrior is the story of how Melton and her husband unlearned everything they had been taught to expect in a marriage and from each other, and fall in love for the first time.

But it’s way more than that. Melton explodes our culture’s myths of masculinity and femininity on her journey of self-discovery and explores how they make it impossible for men and women to truly know one another in a context of all that is real and vulnerable and human.

I’m not a memoir reader. And this sort of personal growth narrative usually gives me the whim whams. But I need to tell you: Melton offers insight we could call feminist but in truth, is humanist. Love Warrior is well thought through, well written and well worth reading. 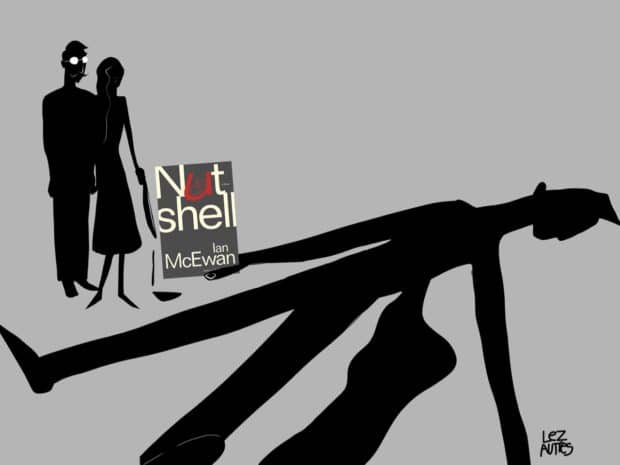 Award-winning novelist Ian McEwan is often described as a “literary writer” so the fact that Nutshell, his latest book, reimagines Hamlet – in the year of Shakespeare’s 400th birthday no less – shouldn’t be a surprise.

What is a surprise: the concept works – and this from a woman who has never been keen on Shakespeare. I know, right?

So here’s the plot: Trudy is carrying on a tawdry (but uber energetic) affair with her husband’s brother Claude – she lives in the matrimonial home (which, by the way, is her husband John’s family’s crumbling Georgian townhouse in central London) – while John has been banished to three rooms in Shoreditch.

John’s a poet and a publisher of other poets until their talent is recognized and they move on to more important publishing houses. He reads her poetry. Brother Claude is a boring and not-very-bright developer. He shags her. Who wins? Claude.

Claude and Trudy hatch a plot to murder John and get their treacherous paws on eight million pounds. But there is a witness to their murderous scheming: the story’s narrator, Trudy and John’s perceptive eight-month-old fetus.

OK, I admit, it sounds weird. But Hamlet and Shakespeare aside, Nutshell is essentially a thriller: short, smart, often funny, occasionally pornographic – and hugely entertaining. The book is masterfully written, with unexpected plot twists and true to McEwan’s talent as a storyteller, you can’t guess the end till you reach the last page. 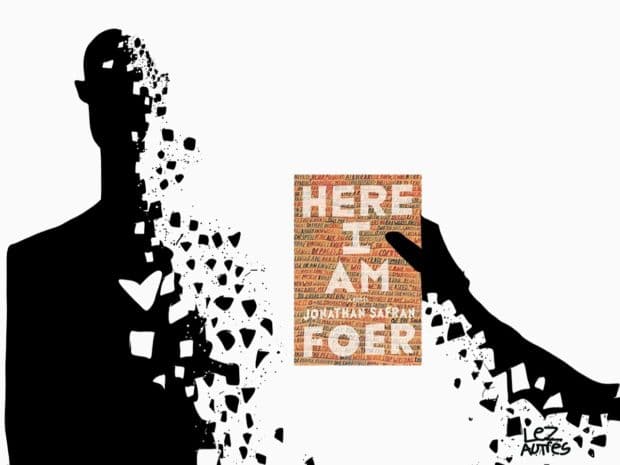 Jonathan Safran Foer is not what you’d call a prolific writer – Here I am arrives 11 years after Extremely Loud and Incredibly Close, an enormous story that was both praised and panned. I expect Here I Am will land in the same place.

Jacob Bloch, married to Julia, father of three boys, is a writer on a popular TV series.

His life, however, is pretty much falling apart. Julia finds his mobile phone and discovers he has been sexting one of the show’s producers; his eldest’s bar mitzvah which the kid doesn’t want anyway, may have to be put on hold because of racial epithets he is accused of writing at school; his boorish (Jacob’s description) Israeli relatives are about to land on his doorstep; his wacky right-wing father is becoming an even angrier blogger; his grandfather is thinking about suicide rather than move to a home; and his elderly dog poops all over the house.

Then, when you think things can’t get any worse, they do: a devastating earthquake in Israel sparks a pan-Arab invasion and that may well lead to the destruction of Israel.

There’s a lot going on here: what it means to be a husband, a father, a son – and what it means to be a Jew in America. And it’s messy: often the writing is smart and on point but occasionally, it’s overweight and in need of liposuction. But the characters are finely drawn and fully formed and the dialogue is clever and often laugh-out-loud funny. The questions Foer raises are thought provoking – put this one on your book club list because there will lots of lively debate, especially if it’s fuelled by a wine and chocolate pairing!