May is my favourite month – OK, it’s my birthday month, so that makes it special, but what I really love about the fifth month of the year is its unabashed embrace of spring. The oak tree in my front yard is budding, fat robins are pulling equally fat worms from the garden and the air is ripe with the scent of new beginnings. May days are fresh and bright and just warm enough to slip on a hoodie, pack a picnic and head to a bench in High Park for a lazy al fresco afternoon with my latest must-read tucked under my arm. Does life get any better than that? I think not! 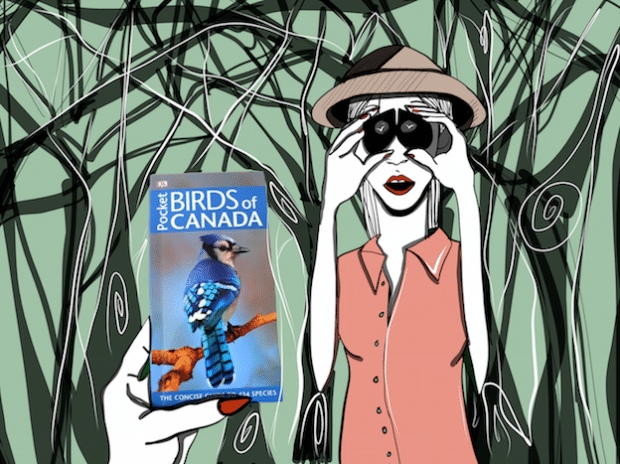 You don’t need to be a committed birder to enjoy Pocket Birds of Canada. Compact, easy to use, and illustrated with beautiful photography, this is the one-stop-shop for everything you want to know about 434 species you’ll spot in Canada.

Pocket Birds offers lots of avian tidbits you can take bragging rights for over rhubarb bellini on a swanky patio. Did you know, for example, that all birds have hollow leg and wing bones, and that pouch-like air sacs are connected to the hollow bones, which reduce a bird’s weight so they can fly?

In May, High Park is Grand Central Station for migrating birds – if you’re canny, you can catch more than 150 species; most are on their way north (Whaaaat?!) but 50 savvy species stay to hook up and make babies: Warblers, Flycatchers, Vireos, Baltimore Oriole, Scarlet Tanager, Rose-breasted Grosbeak and Indigo Buntings.

I’m on the lookout for Cowbirds as I stroll through the park. They’re the home invaders of the bird world, laying their eggs in nests built by other birds and letting the surrogate mom do all the feeding and bird raising. I dunno – seems sorta Bad Parent to me – boo Mother Nature. 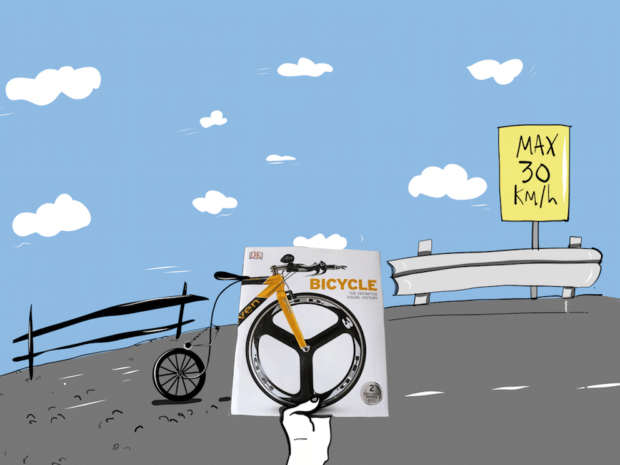 So you know Miss Gulch, that character in the Wizard of Oz? Rides an old-school bike with a wicker basket at the back? Well, that’s me peddling along the boardwalk. But I have three serious cyclist friends – I’m talking about you Bill, Peter and James – and if they promise to stop deriding me as a biking no-nothing I am going to give each of them a copy of Bicycle: The Definitive Visual History, along with a linen napkin to wipe the drool off their chins as they turn the pages.

Bicycle starts in 1817, the year the bicycle was born. It was created out of necessity – a string of poor harvests led to a scarcity of animal feed, and a horse shortage. So an enterprising German civil servant developed this human-powered mode of transportation – and the rest, literally, is history.

This lush coffee table book features more than 300 bicycles in stunning detail including design elements (my fave might well be the Columbia Military bike, circa 1890); profiles of celebrity cyclists plus images, maps and histories of key races and competitions. Bicycle is a heart-felt celebration of bikes and the cycling spirit – and bonus: the book includes two awesome prints totally worth framing. 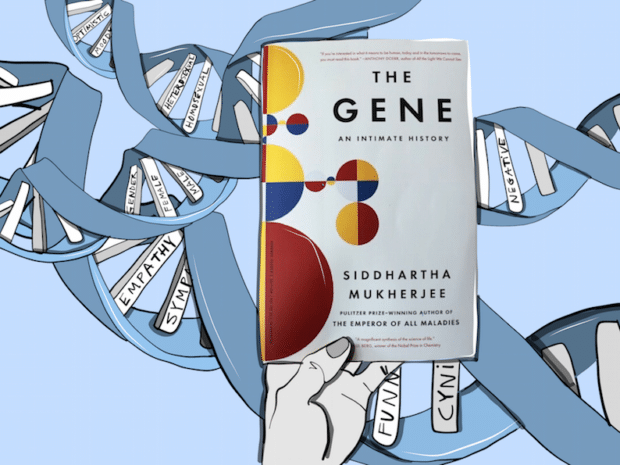 The Gene An Intimate History by Siddhartha Mukherjee

OK, I confess – I wasn’t sure I’d find The Gene An Intimate History very compelling. You know, it’s science and medicine and research and stuff. Dead wrong. I couldn’t put it down.

Mukherjee, who wrote the Pulitzer Prize winning The Emperor of All Maladies: A Biography of Cancer, turns his considerable narrative skills to writing a biography of the gene. Moving seamlessly from science to social history and personal stories, he takes genes out of the lab and into the real world as he explores their impact on shaping – or not – our personalities, identities and perhaps our fates. I was fascinated And I was frightened. Read this book.

“It is one thing to try and understand how genes influence human identity or sexuality or temperament. It is quite another thing to imagine altering identity or sexuality or behavior by altering genes. The former thought might preoccupy professors in departments of psychology, and their colleagues in the neighbouring departments of neuroscience. The latter thought should concern us all.” 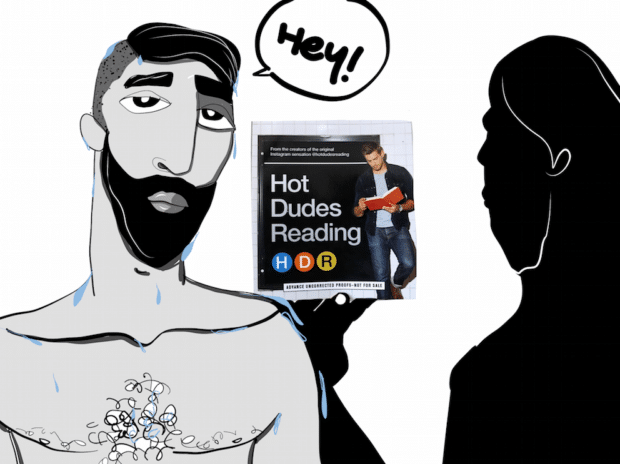 Come clean now – you know you’ve followed the Hot Dudes Instagram account. And you’re not alone – I just checked it out and as of this writing it has 841,000 followers. And for good reason: there just isn’t anything sexier than spotting an awesome-looking guy reading a book on the subway rather than mansplaying annoyingly on the seat next to you.

The Hot Dudes Reading team, apparently a group of close-knit New Yorkers, thinks you deserve to enjoy Hot Dudes wherever, whenever, so they have assembled this picture book of all-new iPhone candids, punctuated by clever captions, laugh-out-loud hashtags and Between the Covers interviews with some of the most popular Instagram Hot Dudes. And out just in time to put you in the rainbow flag waving Pride spirit!

Best Between the Covers Book Read: A Hologram for the King by Dave Eggers – loved it. Hottest Dude Reading: A toss up – Canal Street Dude and High Street Dude. You choose. 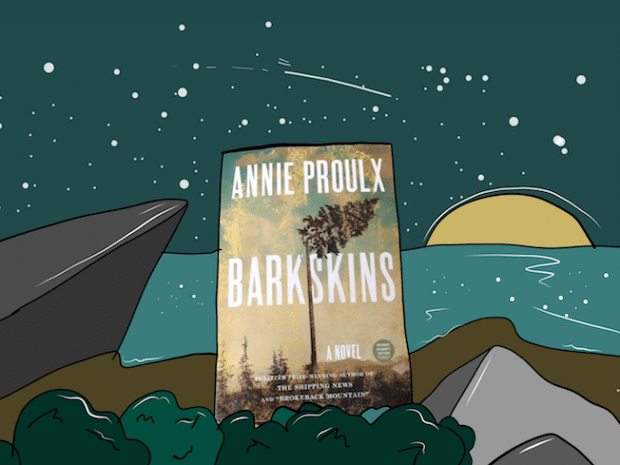 The latest from Annie Proulx, the Pulitzer Prize- and National Book Award-winning author of The Shipping News and Brokeback Mountain is an epic – and I don’t use that word lightly or often. At its core, Barkskins chronicles the destruction of the world’s forests, particularly Canada’s, showing how we got from primordial to the mess we’re in now.

But this isn’t An Inconvenient Truth redux. The story is an ambitious, sprawling masterpiece – the characters so vivid and so human – lustful, greedy and vengeful but also compassionate, courageous and often tragically naïve – their stories so compellingly, that you don’t register that it’s a history lesson, too.

In the late 1600s, two penniless Frenchman, Rene Sel and Charles Duquet, arrive together in New France as indentured servants to the same seigneur, working as woodcutters – barkskins – under brutal conditions – for three years in exchange for land.

Their lives in the New World take different paths but the genius of Barkskins is how Proulx effortlessly (well, it seems effortless but probably was a struggle) weaves together the intersecting stories of their descendants over 300 years in a plausible – and completely believable – grand telling that keeps you turning the pages till you suddenly realize that the sun has set and in my case, it’s way past time to leave my bench and head home.