We’re friends, right? We share. So here is my not-so-secret confession: I am a crime show junkie. The Sopranos, The Wire, Mindhu, Twin Peaks (again), heck on a slow night I’ll even settle down to reruns of Blue Bloods or Criminal Minds.

After recently receiving the The Crime Book (DK Publishing, 2017) I figured I had won the lottery. I was not disappointed. The Crime Book features eight chapters that explore the most compelling cases in crime categories from robbers and con artists to organized crime, murder and serial killers, with timelines for context, great info graphics, and boxes and sidebars stuffed with fascinating facts.

Like this one. Mafia activity began in the mid-1800’s in Sicily. Were they engaged in drugs? Prostitution? Money laundering? Nuh uh. The Mafia got its start as a citrus fruit protection racket. Seriously.

And what about this one? From August to November 2004, a team of smarty-pants smugglers ran a 2km pipeline under the Kyrgyzstan River to send vast quantities of vodka from Russia to Estonia so they didn’t have to pay duty. Their undoing? Parks people. Really. When workers digging holes to plant trees found the pipeline, customs officials seized about 1400 litres of contraband vodka – that’s a whole lot of Cosmopolitans. 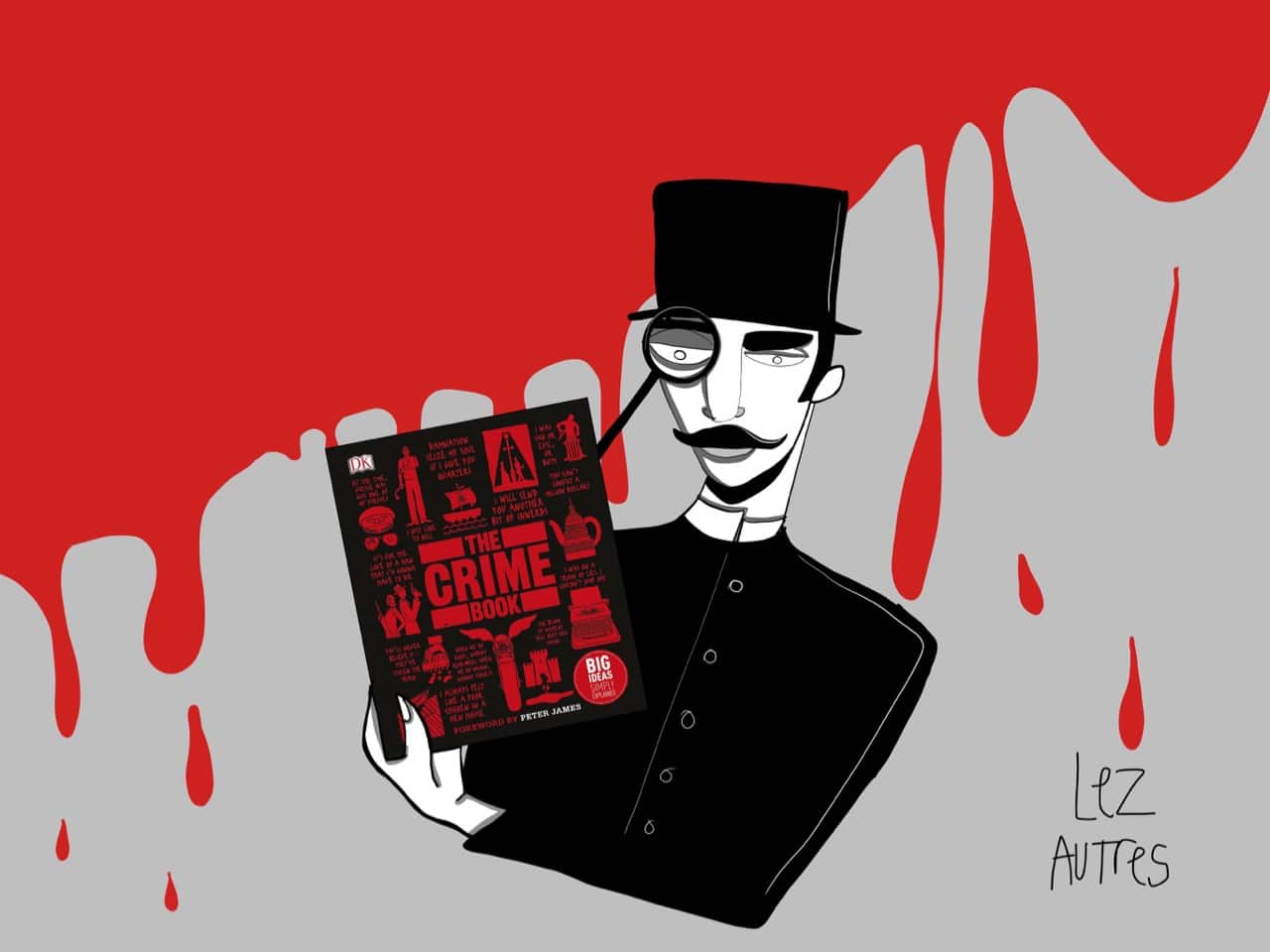 If you are as confused as I am about new superfoods, what eating “clean” actually means, and what’s the deal with gluten-free, Whole30 and a shopping cart full of diets claiming bragging rights for best ever, you need a copy of How Food Works: The Facts Visually Explained (DK Publishing, 2017).

This go-to guide is the food science primer for dummies. Illustrations and info graphics make it dead simple to sort out the good, the bad and the just plain dumb – kinda like separating the wheat from the chaff in the way-too-complicated world of food trends.

Not sure about the whole free-range thing? Well, apparently, free-range standards may just include access – no matter how remote – to some outdoor space. Chickens may still live in high densities and can be de-beaked. Not what you thought, right?

Food crime (didn’t think I could work that in, did ya?)? Apparently, food fraud happens on a scale you can’t even imagine. That cold glass of milk you guzzle the morning after? Well, milk is one of the foods most commonly affected by fraud. Fraudsters dilute it with cheap additives like whey or – yikes! – vegetable oils – and because the supply chain is complex, milk from a bunch of different sources is mixed together so it’s pretty tough to detect the fraud.

And what about that Sunday afternoon cup of tea? Fraudsters cut the tea leaves with used leaves, lawn clippings, coloured sawdust and sometimes – wait for it – sand. Blah!

How Food Works serves up everything you need to know about how food is produced, how it gets to your fridge, what’s healthy and what’s bunk . . . plus a side of fascinating facts. Did you know your kitchen sink might contain 100,000 times more germs than your bathroom? Just sayin’ 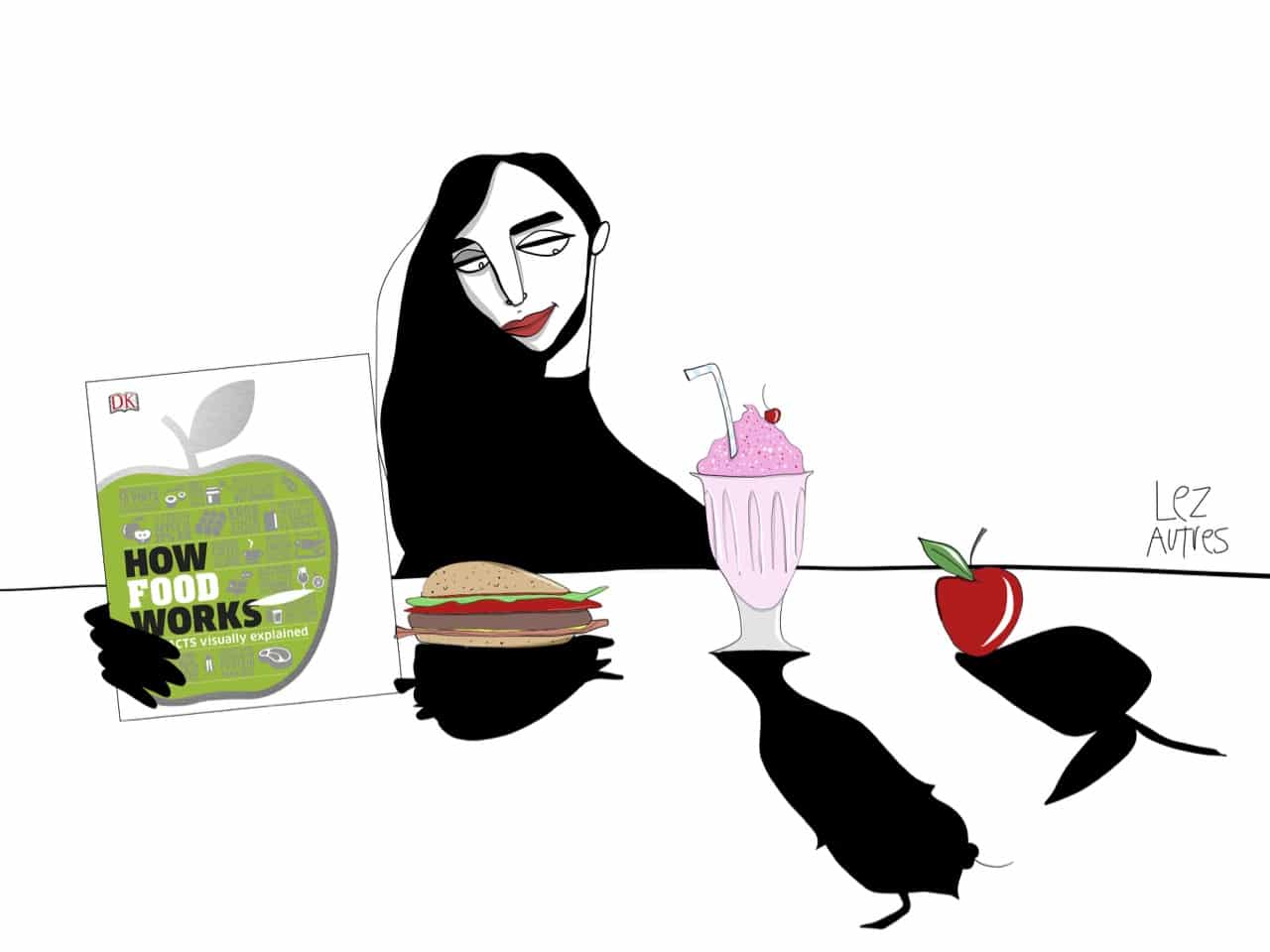 You read Girl on the Train, right? Loved it? Well Into the Water, Paula Hawkins’ latest, is another can’t-put-down thriller (you see the theme this month, I expect) that will be turned into another blockbuster film. Trust me.

An oddly hypnotic river runs through a bucolic – but also kinda Stepford Wives creepy – village in the northern English countryside. Women have been drowning in the pool at a bend in the river since the 1600s, the most recent a single mom and her daughter’s best friend. Suicides? Or murder? The story is told from the perspective of 14 narrators, moving back and forth as the plot twists and turns in unexpected directions. And you will not guess the outcome.

But Into the Water is not simply a darned good whodunit. Hawkins has crafted a smart and tightly written feminist exploration of memory and the elasticity of truth, of women’s forgiveness of misogyny but not of each other, and how the past is not gone but, in fact, ever present. 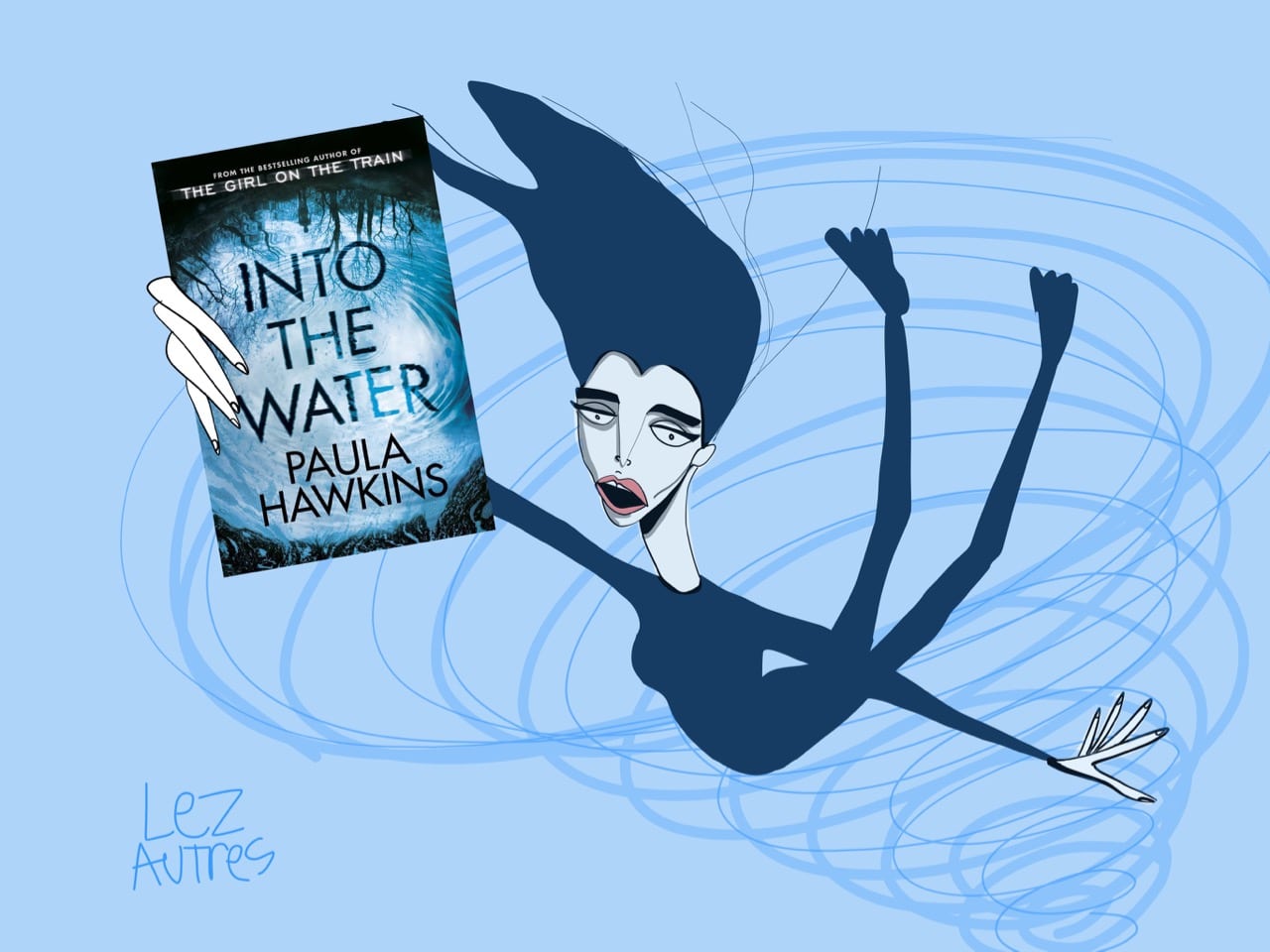 Matriarch Su Yi is on her deathbed and the entire clan converges on Tyersall Park, her 64-acre estate in the heart of Singapore. As the relatives fight over the mansion and her money, Astrid is making time with her old sweetheart and her crazy ex-husband is savagely trying to destroy her until-now sterling reputation; Kitty, an up-from the-streets interloper currently married to China’s second richest man is in a couture war with his famous fashionista daughter; and the lot of them are working behind the scenes to make sure that Nicholas, who grew up at Tyersall Park, is locked out of his inheritance.

Rich People Problems is deliciously over the top – is it possible that there really are people who live like this?! – and the perfect summer holiday read. Then it should be made into a Netflix miniseries. 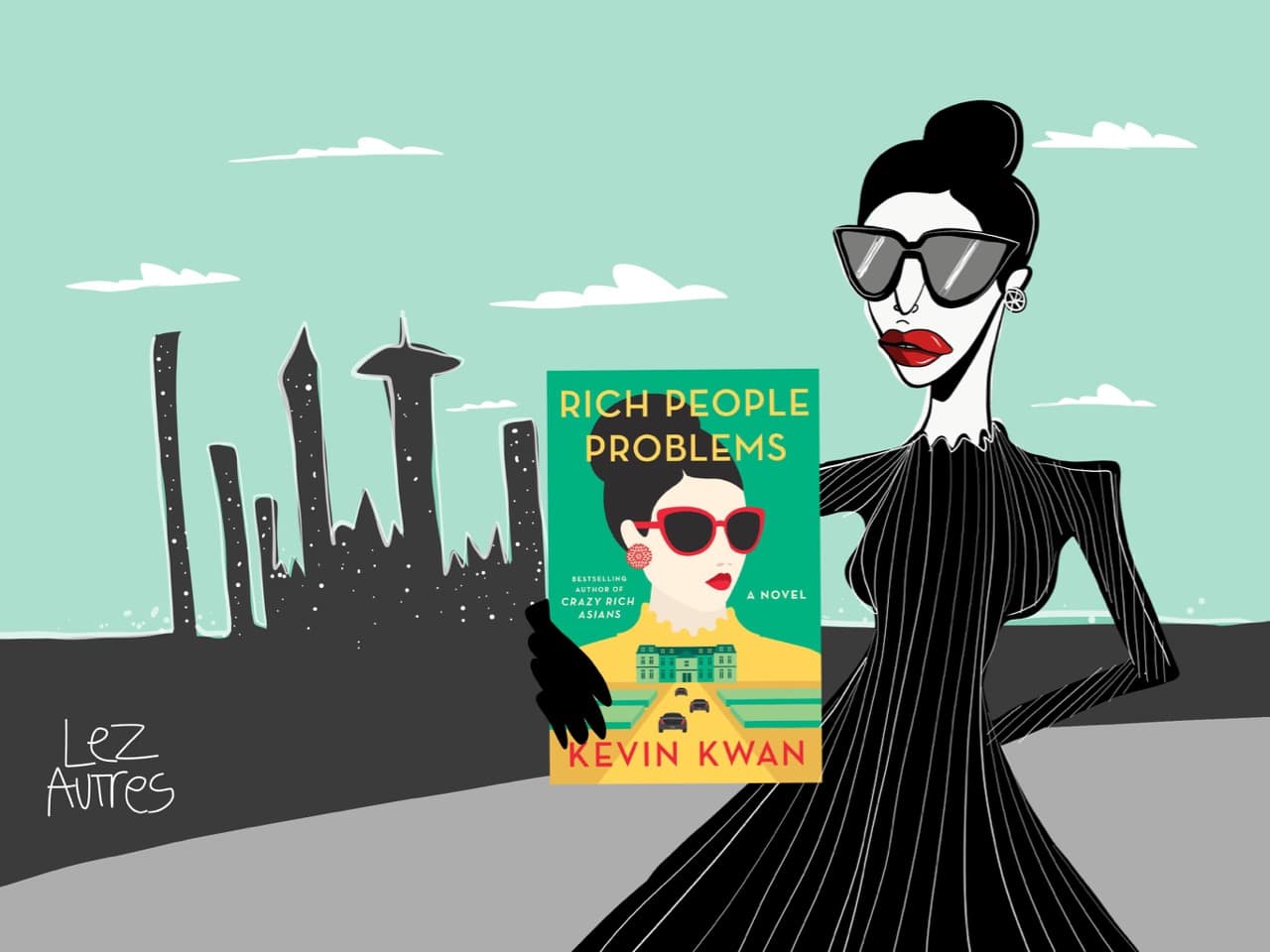 When You Find Out The World Is Against You

Edmonton-born, LA-residing, author Kelly Oxford is a social media powerhouse, sharing pithy – and often Inside Voice personal – one-liners with her 800,000 followers. Oxford is not, it’s safe to say, a regular person – and that’s her appeal: she says out loud what most of us are only thinking. She writes with wit, charm and style, and her clever, insightful observations on modern life are funny, sure, but also poignant.

So no wonder her first book, Everything Is Perfect When You’re A Liar became a New York Times bestseller – her latest, When You Find Out The World Is Against You and Other Funny Memories About Awful Moments (OK, that title is more of a mouthful than it needed to be) is every bit as on point.

When You Find Out is a collection of essays drawn – in no particular order – from Oxford’s life.

She chronicles stuff that made her feel really crappy: Begging her mother to send her to summer camp when she was almost 12; she fantasized about getting her first kiss, what she got was Bible Camp, a bad perm and pulled-off eyebrows thanks to a craft project gone wrong. Moving to LA with her family and discovering – she’s sure of it – that McDonald’s meat, lettuce and cheese are not the same as at home and opting to visit Chipotle’s just in time to see two paramedics trying to revive a customer. She’s not in Kansas anymore.

She also shares stuff that put a smile on her face – well, at least made her feel better: laughing at yourself, and laughing with other people. And coming to this hopeful conclusion: “The sharing is maybe the thing that helps us see that the world isn’t really against us after all. Maybe.” 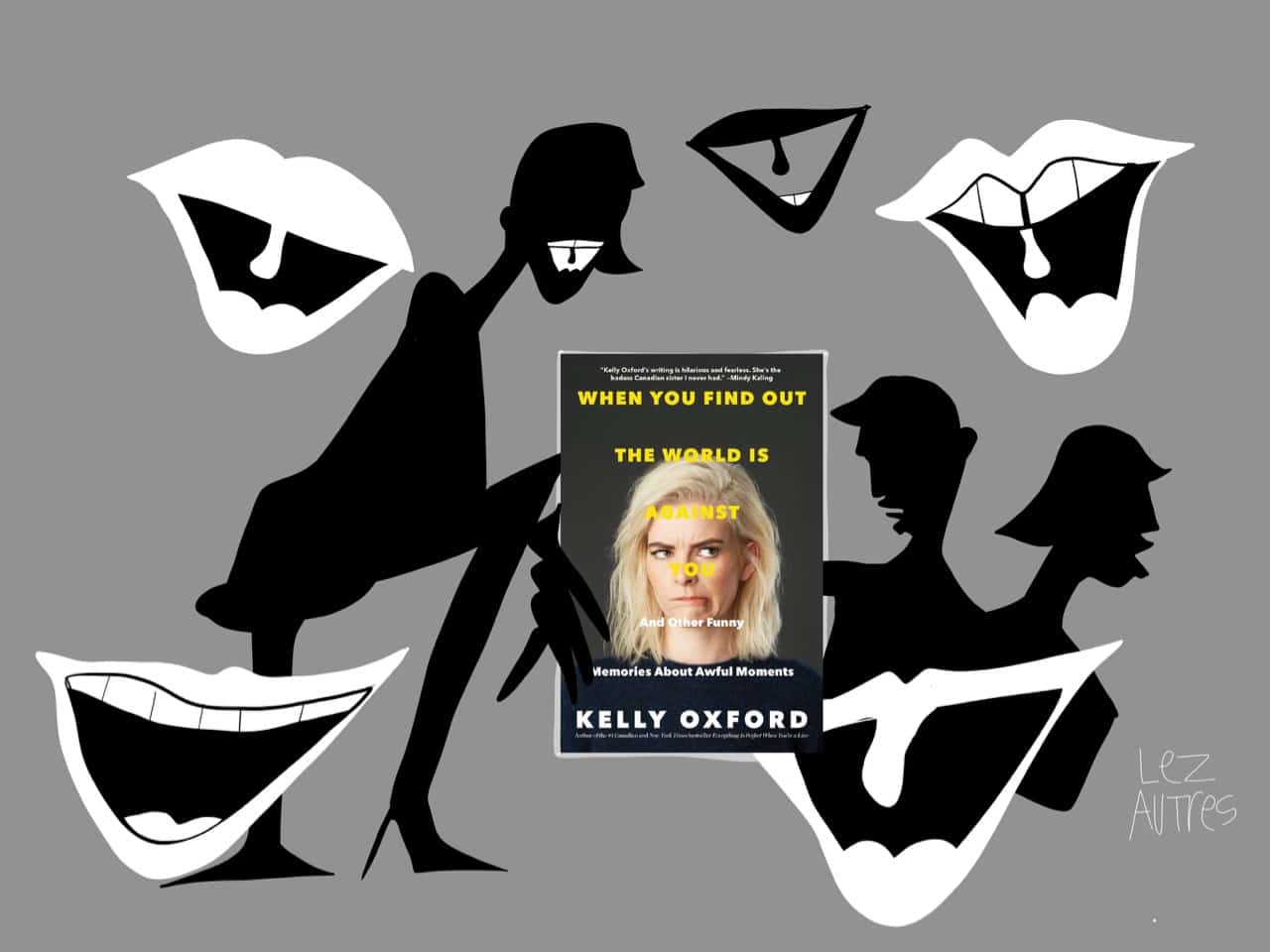