When I was growing up, my mom was Boss of Christmas, from baking fruit cakes, the start of our Christmas countdown, to putting up the tree and shopping for the gifts that Santa would leave for the four of us kids. Except for one very special holiday tradition: a book chosen carefully and with great thought, by my dad.

Today, I still think the best gift to give and to get is a book – so for all of you who still have a gift hole on your get list, here are five I would like to find under my tree this year. 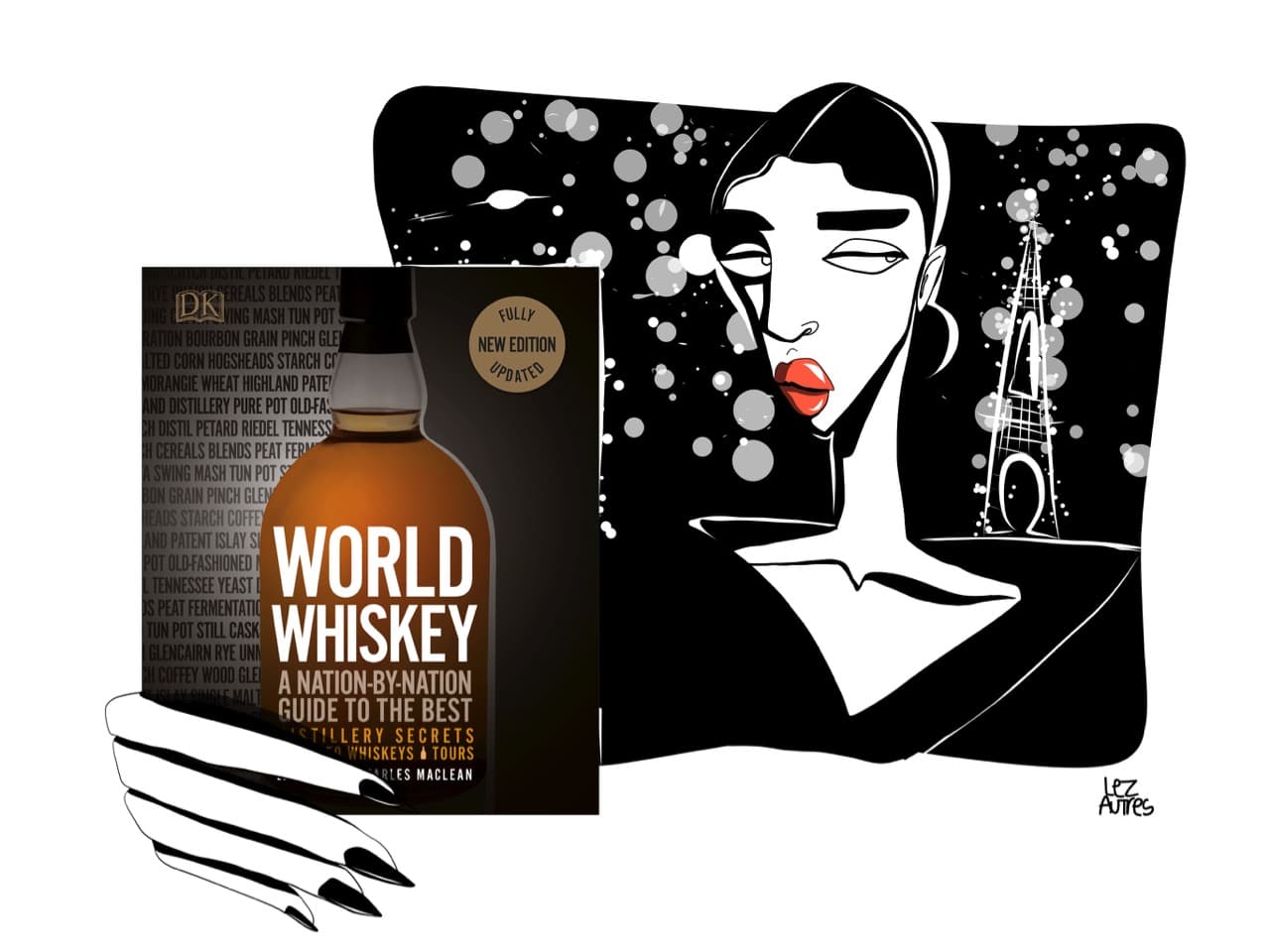 World Whiskey: A Nation by Nation Guide to the Best

I’m a Scotch girl, mentored in the fine art of a slow sip by my dad. Single malt. Served neat – that’s Scottish for straight up, no ice no water. So when this awesome whiskey bible arrived on my desk I poured myself a dram and settled down to explore my favourite tipple.

Whiskey is a simple drink – grain, water and yeast – so, you might well ask, why are there so many subtle (and sometimes pretty overt!) variations in taste?

World Whiskey  answers: small variations in the whiskey-making process including the grains used, the shape of the stills and the type of casks (U.S. distillers use new charred barrels; in Scotland, the spirit is aged in used casks, mostly second-life bourbon casks.)

World Whiskey (DK Publishing, 2016) is the primer every whiskey lover on your gift list is looking for. In addition to tons of info on how whiskey is made, WW also shares secrets of featured distilleries (Jack Daniel’s is distilled in Lynchburg, Tennessee, in an officially “dry” county – visitors can buy merch but no whiskey, thank you very much), photos, whiskey bios, and tasting notes of the best whiskeys from every important distilling nation.

World Whiskey also includes whiskey tour maps to plan trips around major whiskey-producing regions. Sure, you can take a tour of the Scottish distilleries but if you want to own your next get-together tell your whiskey-loving friends you’re going to Japan to tour Suntory’s Yamazaki distillery between Osaka and Kyoto. Yamazaki began distilling in 1924 and today their single malts are considered the equal of Scottish single malts.

World Whiskey is the gift whiskey aficionados and newbies want this year. Trust me. 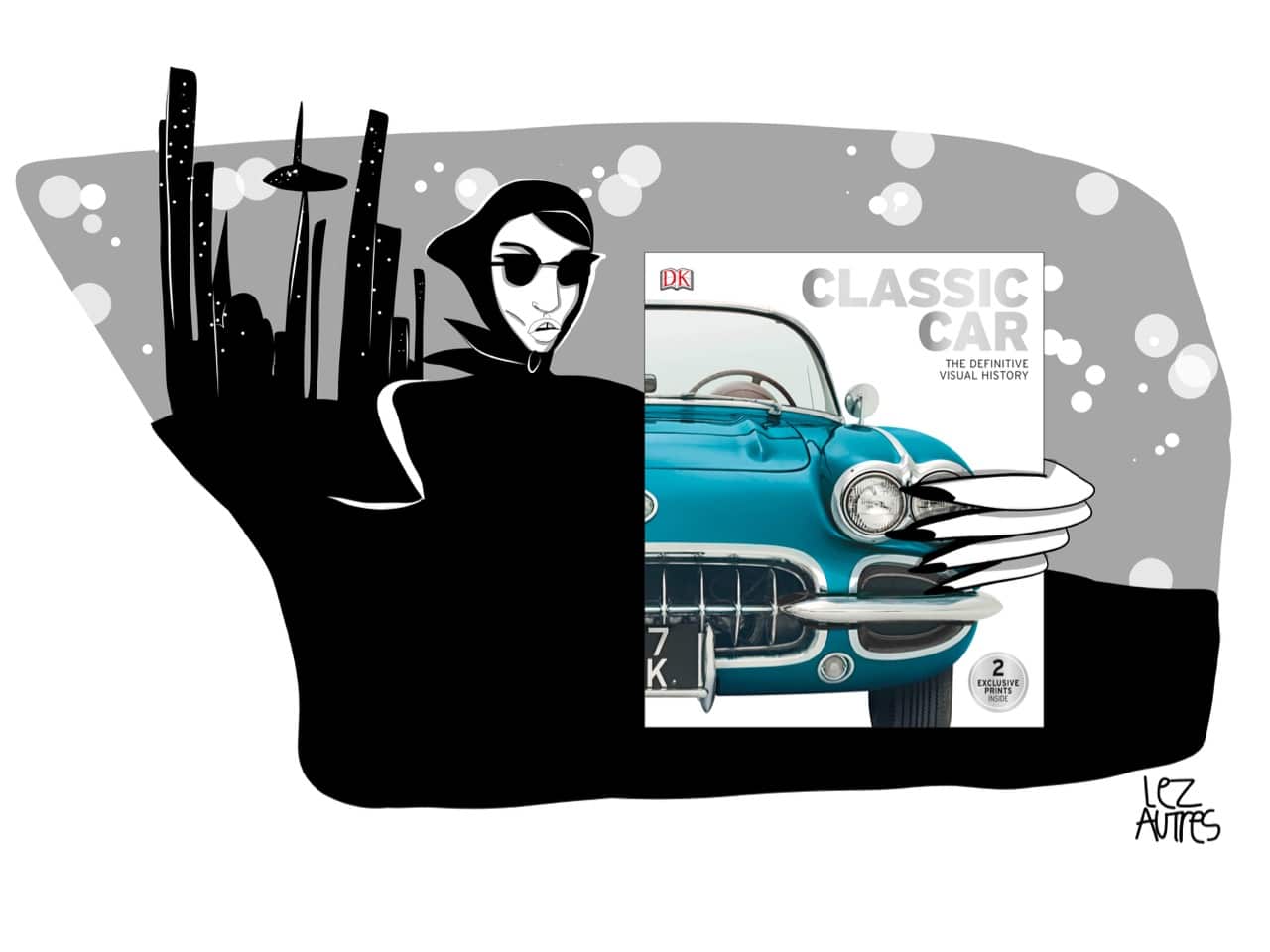 What constitutes a “classic” car apparently is under debate by car clubs around the world, so Giles Chapman, editor-in-chief of this stunning coffee table book, tells us he’s defining classic as cars made after World War II until the ‘80s.

From the 1973 Porsche 911 Carrera RS (my dream car) to the Chevrolet Corvette, Classic Car is packed with iconic marques, models, and profiles of manufacturers and designers, and offers 1300 drool-worthy images including zoom-ins on noteworthy design elements, plus comprehensive catalogs that showcase key features with detailed profiles and specifications.

And that’s not all. Two prints star a 1949 Chieftain Convertible and a 1962 Shelby Cobra – you know you want to frame them.

Classic Car (DK Publishing, 2016) is not a gear head gift: it’s a lush, page-turning celebration of our love affair with the automobile that has nothing to do with engine size, horsepower, torque or top speed.

Because let’s face it, cars aren’t just a mode of transportation. They’re a mash up of style, design, pop culture and art installation, and what we drive tells the world who we are or who we’d like to be.

Questionable Quote: “We at BMW do not build cars as consumer objects. We build mobile works of art.” Chris Bangle, former BMW chief designer, responsible for what was derisively called the “Bangle butt” trunk on the 200 E65 7 series.

More on the Mark: “Design and beauty not only command attention but they are the very foundation of living.” Harley Earl, head of design at General Motors and later vice president, the first ever Design C suite-er appointed by a major corporation in American history.

Bring and brag: While Earl has been described as bombastic, chintzy and overblown (the 50s tailfins are his fault) he was a pioneer in promoting female stylists – his so-called Damsels of Design; he championed the use of crash-test dummies; and he gave cars soul, the book says, turning design into the single most important factor in the auto industry and proving by the number of his vehicles the public clamored for, that cars were not just about functional transport but also about style, passion and aspiration.

This book is a must-give to anyone on your list who believes that sometimes, form does trump function. 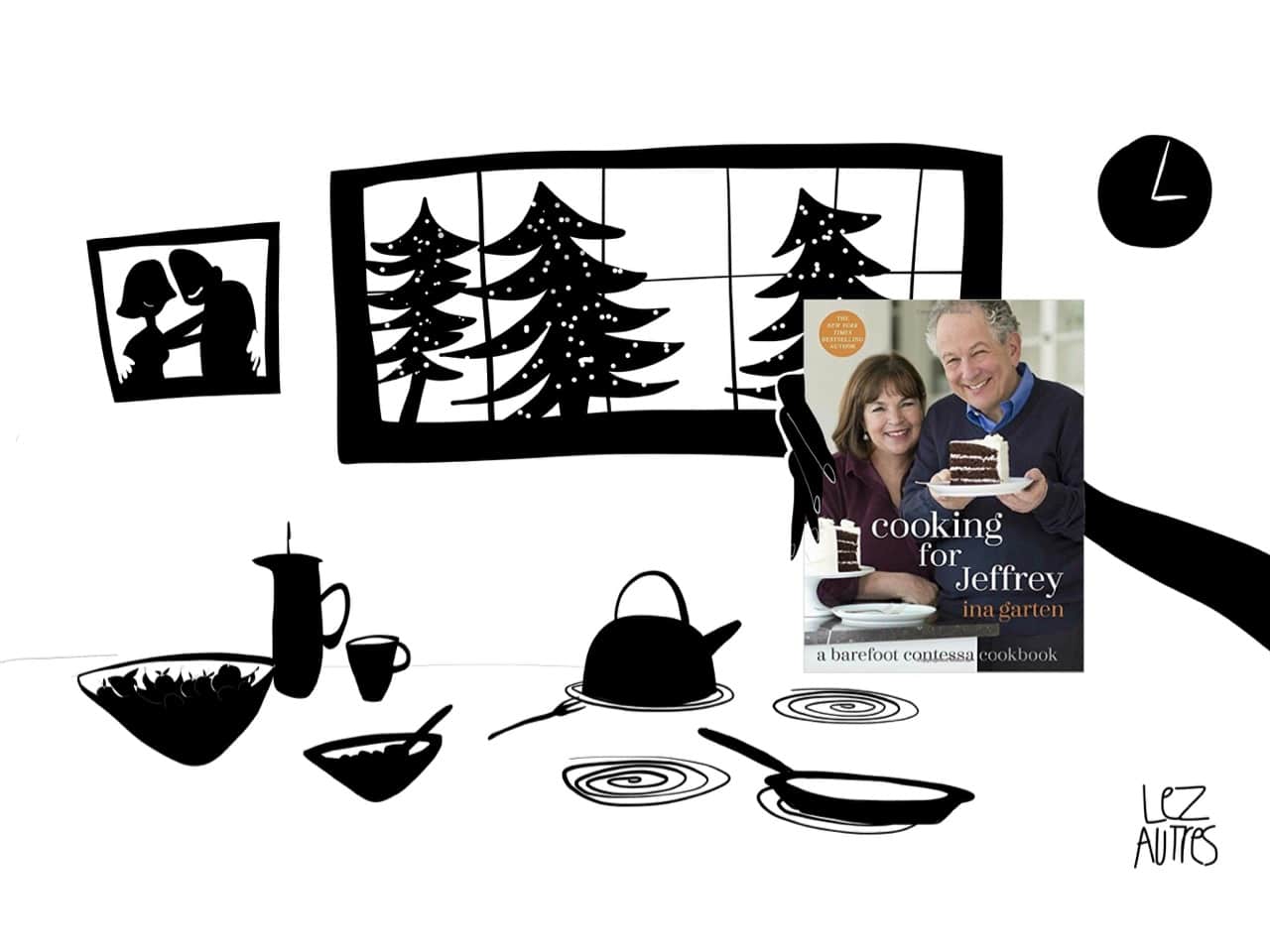 Barefoot Contessa Ina Garten captures the spirit of the holidays with this collection of recipes she cooks for the people she loves – especially Jeffrey, her husband of 48 years.

Like her other books, Cooking for Jeffrey opens with cocktails and apps –
Butternut Squash Hummus, inspired by a Yotam Ottolenghi recipe, is super easy and pretty delish – and moves on in logical order from Soups, Salads and Lunch to Dessert.

This isn’t complicated cooking – the recipes are simple, tasty, often quick to put together, and calling for familiar ingredients you either have on hand or can pick up at any grocery store.

Some of my faves: Crusty Baked Shells & Cauliflower is a creamy, cheesy casserole with sage and garlic and capers – classic comfort food. Shrimp and Swordfish Curry, a sort of Indian bouillabaisse, is easy peasy and makes an impressive dinner party dish. Roasted Vegetable Paella is a little more complicated but every mouthful says the work was worth it – my cooking yardstick!

The Resources section at the back offers useful stuff like your basic pantry (mine, sadly, has almost none of Ina’s must-haves); a starter kitchen (I dunno about the candy thermometer and kitchen timer) and what you need when you graduate to a professional kitchen (I want the Le Creuset Dutch oven, Santa).

Cooking for Jeffery doesn’t offer any surprises, but sometimes, that’s what you want when you’re trying to figure out what’s for dinner. Simple, solid, people-pleasing and unpretentious.

The perfect gift for kitchen warriors and novice cooks alike. 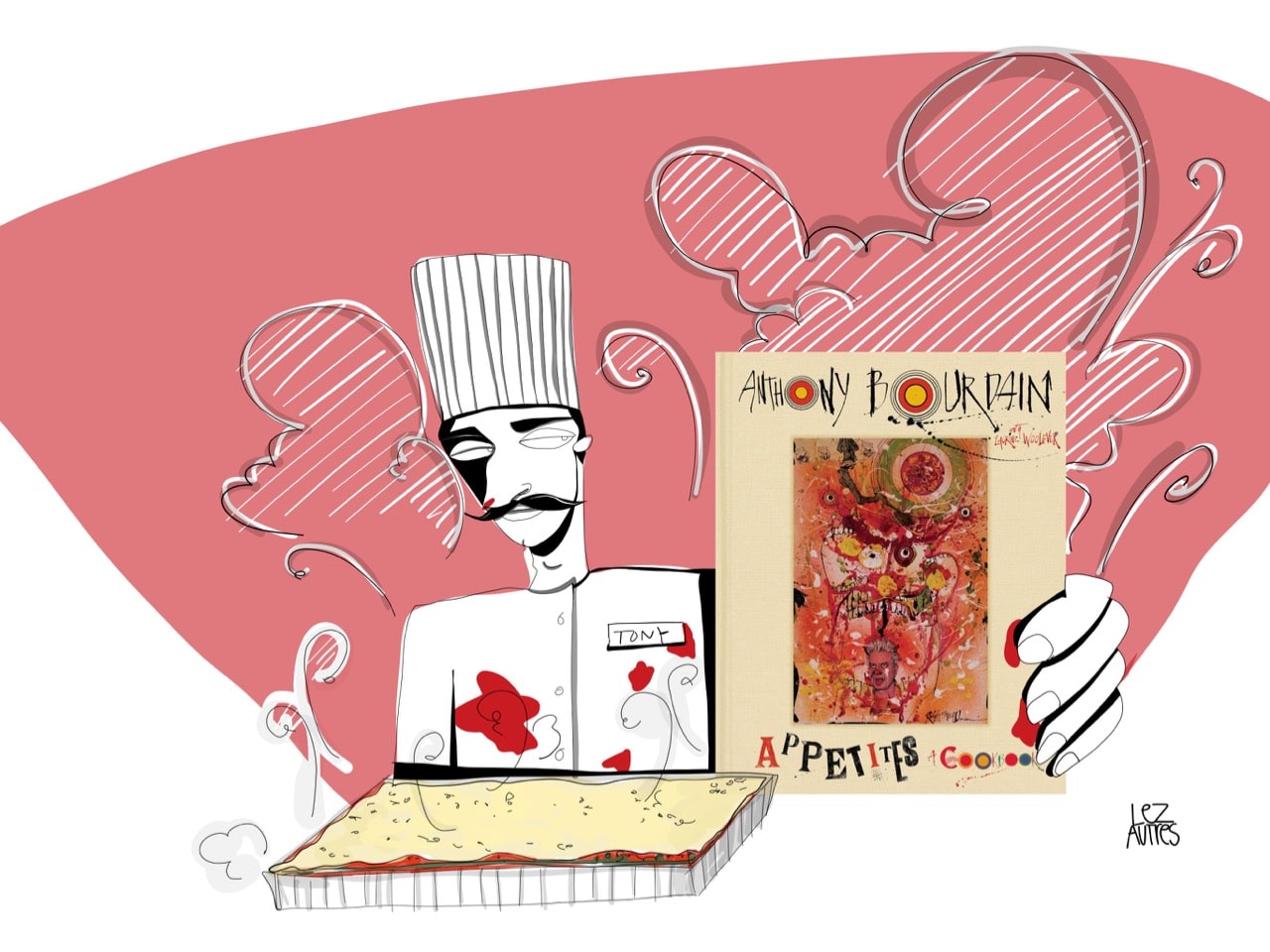 Anthony Bourdain, charismatic, profane, rule-breaking, rough-edged chef and world-traveling food and culture commentator, says his first book in more than a decade serves up the he likes to eat and likes to cook for his family and friends.

“There is nothing remotely innovative about the recipes in this book,” he says in the introduction. “If you are looking for culinary genius to take you to the Promised Land of next-level creativity, look elsewhere. That ain’t me.”

But the book itself is all over Bourdain, from the pretend food splashes on the introduction pages – you know, the ones that spot your much-used cookbooks no matter how careful you are – to the consciously messy food styling (I love the Kuching-Style Laksa shot on page 54) and Whaaaattt!! prop styling (check out the shot of his Korean Army stew recipe on page 59 – the noodles are spilling out of a helmet).

And who but Bourdain would jazz up his simple Sausage and Pepper Hero recipe with a shot of him tucking into said sandwich sitting on a toilet? Or include a graphic novel pullout for making the perfect burger? Or add out-of-nowhere recipe set ups such as this one for Macaroni and Cheese:

“Get that damn lobster out of my mac and cheese. Truffles do not make it better. If you add truffle oil, which is made from a petroleum-based chemical additive and the crushed dreams of nineties culinary mediocrity, you should be punched in the kidneys.”

Appetites is the cookbook Bourdain fans have been waiting for so don’t disappoint them. 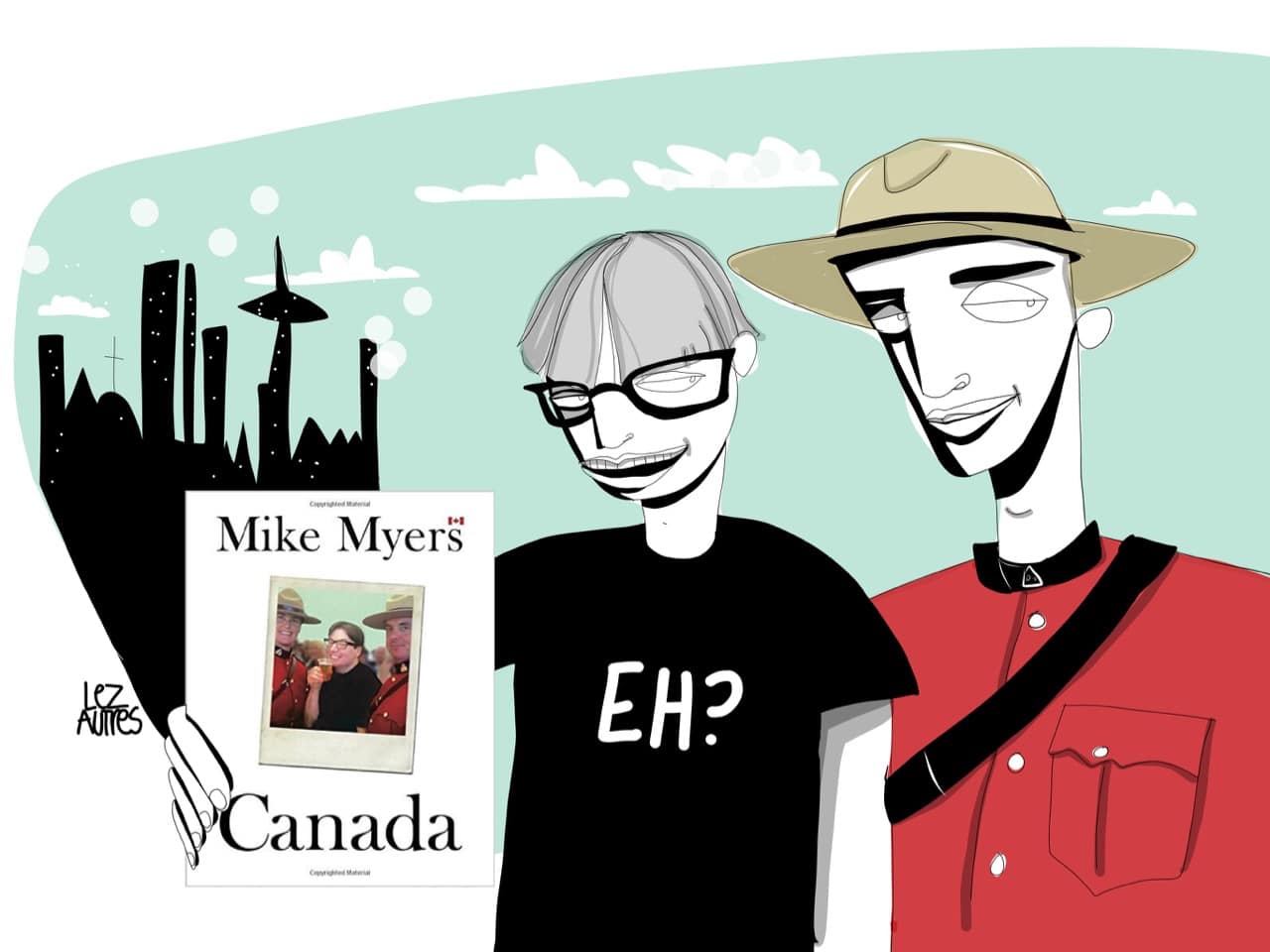 Mike Myers lived in Canada for 20 years. He has lived outside Canada for 33. But he is, by his own admission, indelibly Canadian – and Canada is his homage to what that means to him and, I think, to the rest of us who call The Great White North home.

Part fun fest, part personal essay, part pop culture analysis, Canada explores Myers kid-hood growing up in Scarborough (I grew up in Etobicoke and making fun of Scarberians was what we did), how his Canadian identity shaped his work as an actor, writer, producer, director – and his life as a husband and father.

Myers was 19 when he landed a spot with the Second City Touring Company, which in turn, offered him the opportunity to experience Canada – and Canadians – from St. John’s to Victoria. So when he went south of the 49th parallel, as so many Canadian have, he not only carried his Canadian-ness with him, he used it to inform his work – Wayne’s World is a classic example.

Myers says Canada, complete with an album’s worth of personal photos, is not a memoir, but I disagree. It’s also a love letter.

“Fame,” Myers writes in his Introduction, “is a real experience. But it’s not a Canadian experience, and nothing about growing up in Canada prepares you for public life.

“My Canadian-ness affects every aspect of my being. My American friends once accused me of enjoying being Canadian. Guilty as charged.”

Canada is a great gift for Canadians at home and abroad – and heck, I’m giving it to a couple of my American friends to make understanding me a whole lot easier.