April is one of my favourite months. You know why? April showers. And not only because spring rain feeds my thirsty crocuses, snowdrops and tulips. There is something magical about snuggling under my faux fur throw and spending an afternoon with a good book as the mist swirls outside and fat rain drops gently plop against my window. That, my friends, is time well spent! 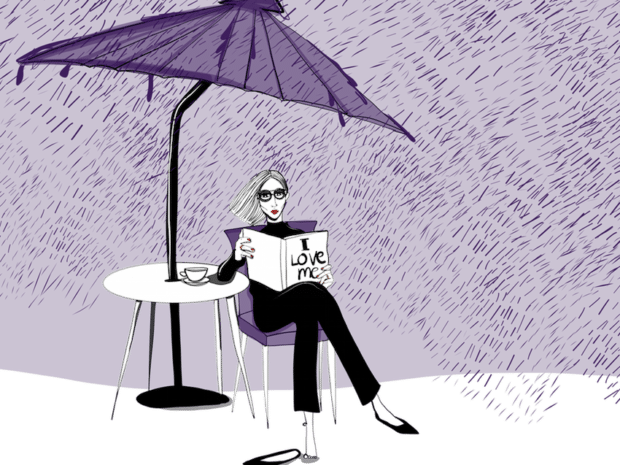 So if you’re looking for some buzz-worthy books to befriend on a rainy Sunday this month, here are five you don’t want to miss: two travel guides to help plan (or dream about) your next getaway, a drinks guide to unleash your inner mixologist (mojito season is only weeks away) a get-your-life-in-order inspirational read (new beginnings and all) and the two page-turning novels everyone is talking about. 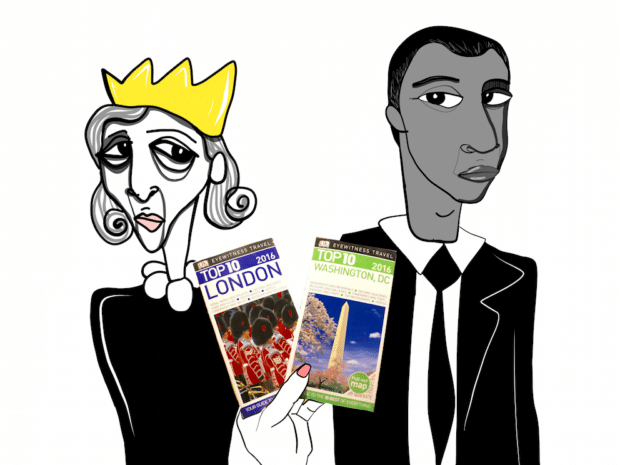 These re-launched insiders’ guides make it easy peasy to plan your getaway with Top 10 recos for must-see sites and cultural events; hotels from budget priced to five star; restaurants from cafes to Michelin-starred splurges; plus handy pullout maps to pop into your backpack.

Washington is one of my favourite American cities – I wept at the Vietnam Veteran’s Memorial, and the White House left me pondering the impact of architecture on perceptions of power. Not sure where to start? Eyewitness Travel Top 10 Washington shares the 10 Best of everything to make your mini getaway count.

First stop: The National Mall, a 1,000 acres of green space in the heart of the city, home to Smithsonian Museums (the National Museum of American History includes Julia Child’s TV kitchen!) and iconic monuments such as the Lincoln Memorial and Washington Monument. Don’t miss: a tour of The White House (you have to book tickets for your self-guided tour way in advance; foreign citizens must request tickets from their Embassy in DC); the Washington National Cathedral, the sixth largest cathedral in the world (the high altar is made from stone dug from Solomon’s quarry outside Jerusalem); and the National Zoological Park (the Western Lowland gorillas are not only super awesome, they are our closest relatives).

London is another of my favourite destinations, but like Washington, there is so much history, culture, theatre and, of yes, shopping, it’s tough to separate the best from the rest. To the rescue: Eyewitness Travel Top 10 London, which includes the must-sees/dos by neighbourhood including day-trip itineraries – brilliant. Watch the changing of the guard at Buckingham Palace, the Queen’s official home; visit Westminster Abbey, where all the monarchs have been crowned since 1066; take a ride in the London Eye, kind of like a huge Ferris wheel with 32 enclosed pods holding 25 people and offering breathtaking views over the whole of the City; stop by Harrods, London’s most exclusive (code for VERY expensive) department store – you know it’s exclusive because if you show up in ripped jeans or wearing a backpack the doormen won’t let you in. I could go on – buy the book! 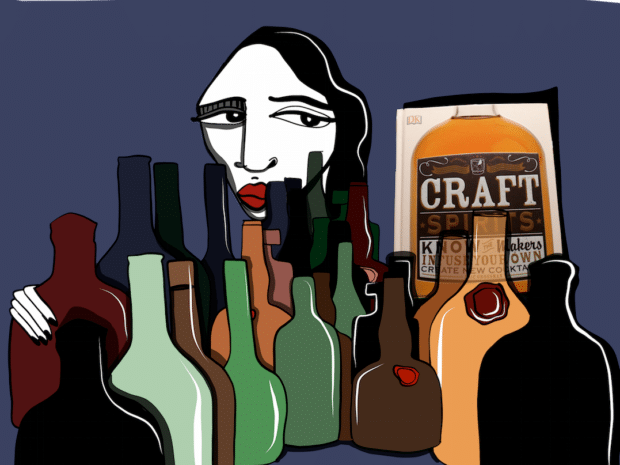 Craft Sprits is your A to Z guide to small batch distillers around the world, including some surprising entries from Canada: PEI Potato Vodka, for example, and Stalk and Barrel Single Mat from Still Waters Distillery in Ontario – who knew?

Part reference Bible, part recipe book, Craft Spirits serves up basics like how spirits are made (there’s a still involved), the big deal about barrel aging (did you know that Scotch is usually aged in recycled bourbon barrels?) plus step-by-step to infusing spirits and making reinventions of the cocktail classics.

This book is a keeper, with beautiful photographs (the drink pics make you want to lick the page), fanciful illustrations and yummy-sounding recipes using often-obscure spirits. A Brazilian Caipirinha, anyone? 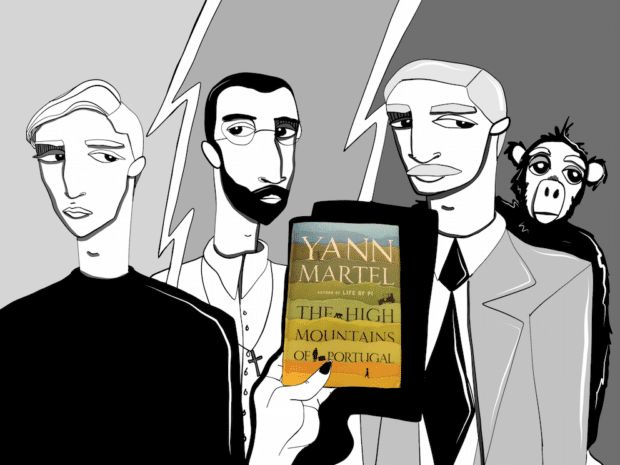 The High Mountains of Portugal by Yann Martel

The High Mountains of Portugal is really three connected short stories. The book opens in Lisbon, 1904. A young man named Tomas, who has recently lost his wife and son and now walks everywhere backwards (this is Yann Martel, remember) discovers an old journal that hints at a religious artifact that will redefine Christianity. He sets out in one of Europe’s first cars to find it.

Fast-forward 35 years. A pathologist – a devout Christian and a crazy fan of Agatha Christie mysteries who has also recently lost his wife – performs a strange autopsy on an old man from the mountains of Portugal, and is drawn into the story that started with Tomas. Add another 50 years. Canadian Senator Peter Tovy who has – you guessed it – just lost his wife, travels with a recently-acquired chimpanzee to the mountains of Portugal to start a new life. And discovers the truth Tomas was seeking.

Martel studied philosophy at university – I think that’s why his story telling is more allegory than straightforward fiction: you need to suspend belief and let the story unfold without asking too many questions. If you can do that, you will be rewarded. 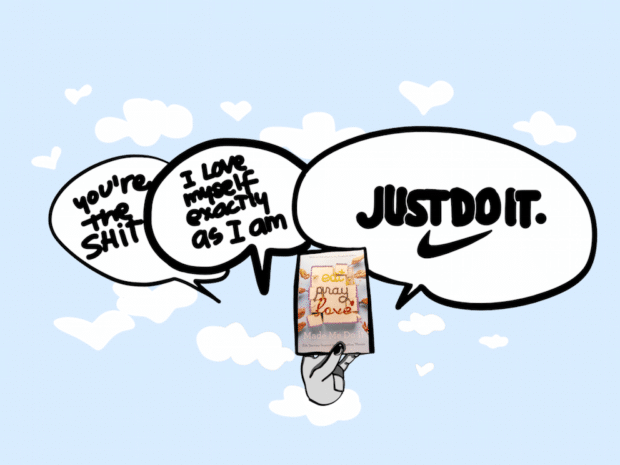 Eat Pray Love Made Me Do It

OK, a personal question: Are you bored with your going-nowhere job? Depressed by your not-even-half-right relationship? Tired of pretending your room in your parents’ basement is an “apartment”? If you answered yes to any of those questions I just read the book you need to kick-start a new and exciting life.

Eat Pray Love, the spookily successful self-help/travelogue turns 10 this year, and to celebrate, the publishers have collected 47 essays of self-discovery inspired by the book and its power to push readers on the path to finding their true and best selves.

Contributors to Eat Pray Love Made Me Do It share their stories of overcoming fear, self-loathing and loss in search of a more authentic self, all thanks to lessons learned from the original ELP.

Repeat the mantra: “My life doesn’t have to look like this anymore”. Read the book. Find your Aha moment. And then in the immortal words of the Nike ad – Just Do It. 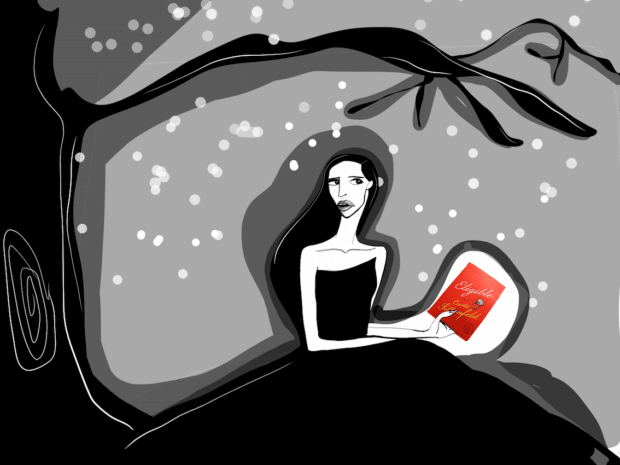 Eligible is billed as a “modern retelling of Pride and Prejudice” Jane Austin’s 1813 novel of life, love and manners amongst England’s landed gentry. I studied P & P in high school lit class but did I remember the plot? Nu uh. So I Googled Cliffs Notes.

Eligible is, in fact, P & P redux. Sort of. But you don’t actually need to know the plot of the original to enjoy the current interpretation. Liz Bennet, the eldest of the five Bennet girls, is a magazine writer in her late thirties who, like her yoga instructor older sister, Jane, lives in New York City. When their dad needs bypass surgery, Liz and Jane go home to Cincinnati to help out – and discover the family is in shambles.

The eight-bedroom Tudor is falling apart, Mary, the middle daughter, pretty much stays in her bedroom, working on her third online master’s degree, and youngest sisters Kitty and Lydia, have created unpaid fulltime jobs out of their CrossFit workouts and Paleo diets. Worse: Mrs. B. has only one mission in life: to marry off her daughters. Properly. To a man of social standing. And reasonable wealth. Needless to say, there are various bachelors, changes of heart, misunderstandings, feelings left unexplored . . . And things work out in the end.

Eligible is smart, funny and entertaining, an easy read that makes a hundred year old story seem fresh and contemporary – which might say as much about human nature as it does about Sittenfeld’s story telling prowess.