Each time I head to the nation’s capital I make sure to visit the National Gallery of Canada. Yes, I grew up being dragged to endless museums, so I’d likely suffer some awful guilt were I to skip a sesh, but it truly is an outstanding art gallery that should be at the top of your Ottawa to do list. 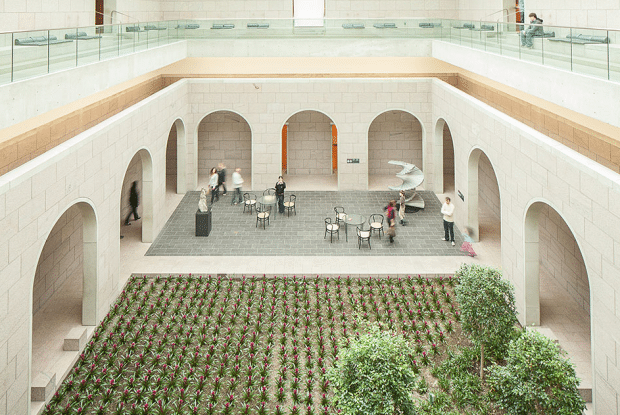 The building itself, designed by Moshe Safdie, is a stunning structure that’s a lynchpin of the Ottawa skyline. Panes of glass let light flood into the entrance hallway, but once you’ve stepped into exhibition space, there are myriad windowless rooms to get lost in. Be sure to make your way over to the hidden Rideau Chapel, which may or may not have a choir blaring out of speakers — an incredible sound sculpture by Janet Cardiff. Spending hours here is easy; extricating oneself from its clutches is the hard part!

While the rotating exhibits are always stellar (during my visit it was all about Monet), do navigate your way around the permanent collection as there’s such a great variety under one roof.

Top 5 at the National Gallery of Canada in Ottawa 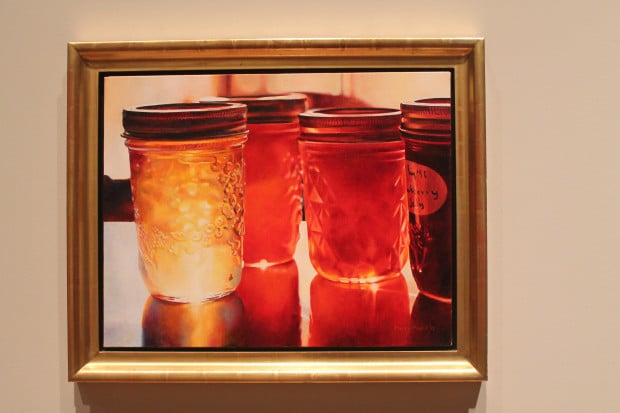 Mary Pratt has a way of capturing light like no other. The Canadian artist elevates seemingly mundane things to another level, capturing their simple beauty through her pristine brushstrokes. If you were to see her work without the telltale golden frame, mistaking the images for photographs would be a given. Here, she takes the classic household item — the mason jar — and renders it in oil paint, somehow managing to perfectly put to canvas the light-transmitting ability of the semi-opaque jelly. 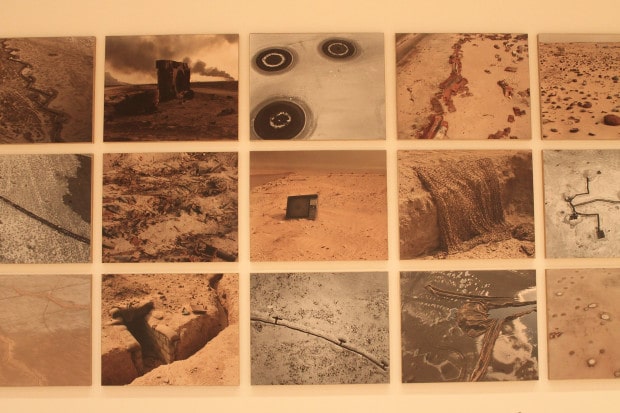 Made in the aftermath of the Persian Gulf War (1991), this work is incredibly powerful. Stretching over a vast space in the gallery, the piece in its entirety is comprised of 71 individual chromogenic and gelatin silver prints, photographed from both ground and aerial vantage points. The exact number shown depends on the gallery itself — here, for example, there wasn’t space for all of them. The piece carefully depicts and juxtaposes the extent of damage, of the temporary scarring the war had on the environment, and speaks to the permanent psychological scars endured by those involved in the war. It feels both public and private and acts as a compelling argument against violence. 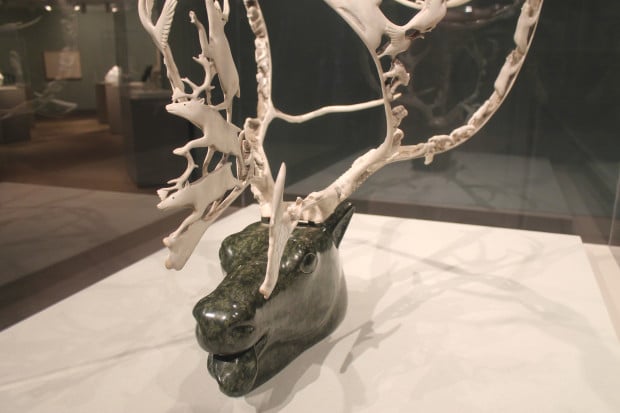 Down in the basement sits the collection of Inuit artwork; Nunalo is the most arresting piece, a diorama on antlers, if you will. A very knowledgeable security guard presented me with a bounty of information about the carving; Oopakak carved this work from a set of meter-high caribou antlers after having shot the animal himself. Their massive size indicates that the caribou was very old and had definitely survived a battle or two, what with the one antler being shorter than the other. Carving this took Oopakak an entire year, and each scene in this diorama remains connected to the antler’s base. The detail is incredible; arctic animals like whales and polar bears roam across the antler surface while tiny figures commit to human activities like fishing and dog sledding. 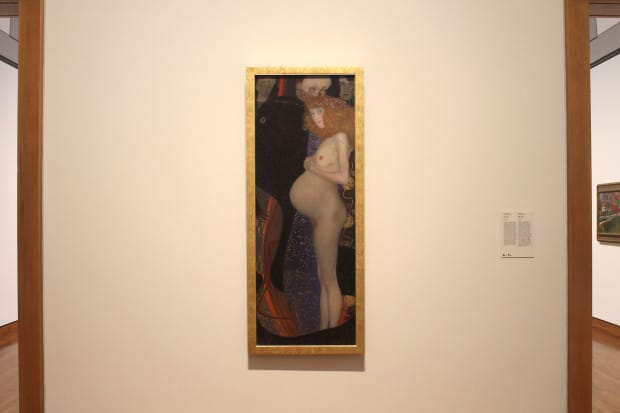 Having spend my formative years hopping back and forth between Ottawa and Austria, I can’t help but fall for Klimt each time I spot one. In Vienna, one would traipse through an entire palace of them (the Schloß Belvedere), but here adorers can take in this one. The painting’s protagonist is outfitted with Klimt’s signature luminescent skin tone (pastel blues! pearly whites! seafoam greens!) and the decorative golden shapes scattered across the canvas. It transports you to a place that lingers somewhere between the now and the afterlife, the gaze of the woman very matter-of-fact as the corpses behind her threaten to snatch her unborn child into the other side. 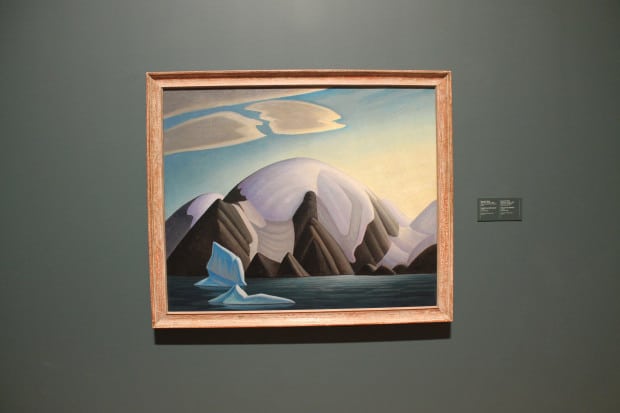 No visit to the gallery is complete without a jaunt over to the area housing work from the Group of Seven, who changed the landscape of Canadian art through their, well, landscapes. In late 2015 a Lawren Harris painting — Mountain and Glacier — sold for a record $4.6 million. And it wasn’t even one of his best. Here, a Harris comes in the form of Yellow Sky, Blue Spruce, which has always captured my eye with its boldness. A stark yellow sky frames the silhouettes of the spruce trees which are almost lifeless next to the swirling breathing boulders below. Even in utter peace and quiet the wilderness is pulsing with life. Be sure to have a peek at Tom Thomson, Emily Carr and the other nature loving cats from that era while you’re in that neck o’ the woods. 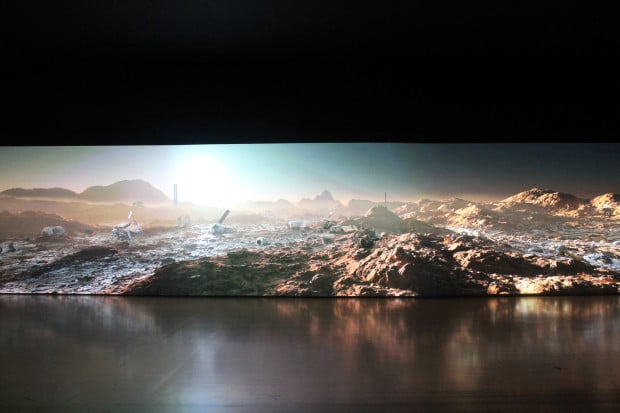 Set in a pessimistic view of the future, Richardson’s video installation serves up a panoramic view of Mars. Find yourself embraced by the blackness of the room and swept away to this place of despair, where all is still save for the odd piece of technology that winks sadly. This work feels very pertinent in a society where consumption and technology digestion are still prioritizes, despite the tangible effects we’ve already witnessed firsthand. Apparently the artist wants all her landscape work to be both arresting and unnerving. Mission accomplished. This piece is for those with a fondness for films like Melancholia which come wrapped in a depressive sheen.