Official capital of Wales only since 1955, the buoyant city of Cardiff has over the last fifteen years witnessed a remarkable evolution from a large town to a truly international city, with massive developments in recent years in the centre as well as on the rejuvenated Cardiff Bay waterfront.

Cardiff’s sights are clustered around fairly small, distinct districts. Easily navigable on foot, the commercial centre is bound by the River Taff. The stream flows past the high stone walls of Cardiff castle and the Millennium Stadium. Near the southwestern tip of the castle walls is Cardiff’s main crossroads, where the great Edwardian shopping boulevards Queen Street and High Street conceal a world of ancient arcades. North of the castle, a series of white Edwardian building play home to the awe inspiring National Museum, City Hall and Cardiff University.

I had been wishing for Wales for some time as it was the last badge on my UK to do list in need of conquering. Most start their Welsh adventure in Cardiff which you can easily tackle in two full days. Here are my Top 10 Must Do’s in the Welsh capital: 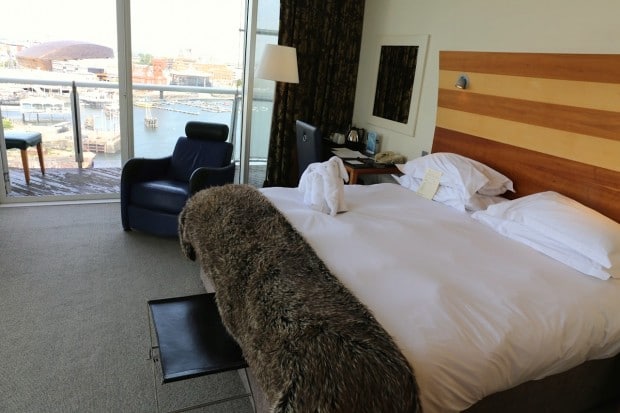 Fifteen years ago when the St David’s Hotel opened to the public it was billed as the first purpose-built five star hotel in Wales. The stunning glass creation which resembles a ship’s prow, was designed by architect Patrick Davies. The £17 million development sought to make a bold contemporary statement with the dramatic glass front façade which gives the open air feel within the hotel’s interior design.

Any visitor cannot help but be impressed by the glass lobby atrium which spans from floor to ceiling, with a design inspired by the iconic Guggenheim Museum. Unsurprisingly, a highlight of staying at the St David’s Hotel is the magnificent views across Cardiff Bay, available from many of the rooms. In 1998, Olga Polizzi, the sister of Sir Rocco Forte was given the challenge of creating an interior design to complement the magnificent architecture of the hotel. Olga chose a simplistic and modern style to match the status of St David’s Hotel as a flagship build in the developing Cardiff Bay.

Wake up early on Sunday and enjoy a stroll along the River Taff in search of a fresh al fresco breakfast. The path is covered in lush tree’s which sway in the breeze opposite the city’s famed goliath Millennium Stadium which hosted the very first event of the London 2012 Olympics when the football tournament kicked off the games. You’ll find a line of tents perched over the river where local farmers, honey mongers, floweriest, bakers and butchers offer up fresh locally grown, raised and produced treats. 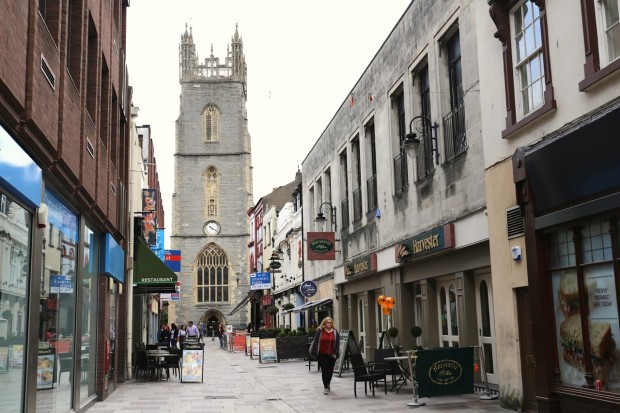 The City Parish of St John the Baptist is among the oldest in Cardiff and located next to the city centre’s covered market. It is the oldest remaining medieval building in the city after Cardiff Castle, originally built in 1180 as a chapel of ease for the larger St Mary’s Church, itself founded by Benedictine monks from Tewkesbury Abbey.

The geographical and historical heart of the city is Cardiff Castle, an intriguing hotchpotch of remnants of the city’s past. Having been the seat of several powerful families over the centuries, its most intense phase of development came under the ownership of the Bute family, in whose hands the castle remained for the best part of 150 years, from the late eighteenth century until the death of the four Marquess in 1947. The fortress hides inside a vast walled yard, each side measuring well over 200 yards long and corresponding roughly to the outline of the original fort built by the Romans. Before entering, take a look at the exterior wall running along Castle Street to the river bridge, where stone creatures are frozen in impudent poses, a rather tongue-in-cheek nineteenth-century creation. 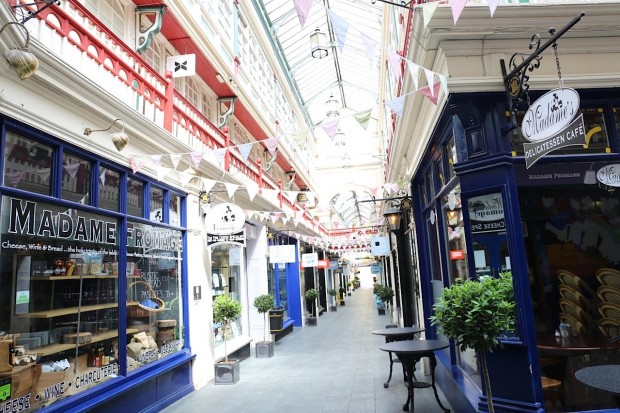 Off the High Street is the elegant Victorian indoor market, great for fresh food and specialist bric-a-brac stalls. Along both streets, renovated Edwardian arcades, with some of the city centre’s most interesting shops inside, lead off between the buildings. Of these, High Street and Castle arcades, at the top of High Street, are the most rewarding, filled with florist shops, cute cafes, vintage bookstore, cheese monger, hair salon and a quirky instrument shop.

Housed in a massive domed Portland-stone building, the exceptional National Museum and Gallery attempts to tell the story of Wales and reflect the nation’s place in the wider, international sphere. In the Natural History and Archeology galleries you’ll find sparkling crystals, early human skeletons, horned animals’ heads and an exquisite collection of Celtic jewellery. The real action can be found in Galleries Eleven through to Seventeen which play home to the museums famed collection of Impressionist works. Highlights include inspirations by Millet, Manet, Monet, Henry Moore, Cezanne, Picasso, Degas, Pissarro, Renoir and Rodin.

Water Taxi to The Bay

The most relaxing way to reach the bay from the city centre is by water taxi. It’s a charming 20 minute cruise which sails down the Taff River, under the imposing Millennium Stadium and past a gaggle of pretty white swans. You’re bound to spot locals jogging along the shore, rowers that race and sailboats catching an afternoon drift.

The city’s spectacular bay has become one of the world’s biggest regeneration projects, the downbeat dereliction of the old docks having been almost completely transformed into a designer heaven. Dominating the whole area is the mesmerizing Wales Millennium Centre, a vibrant performance space for theatre and music where you could listen to someone like this dj cardiff among other forms of entertainment. Likened by critics to a copper-plated armadillo the WMC soars over the Bay rooftops, its exterior swathed in numerous Welsh building materials, including different slates, wood and stone, topped with stainless-steel shell tinted with bronze oxide to resist the salty air.

Down by the water’s edge is the magnificent red-brick Pierhead Building, which has beckoned ships into Cardiff port since its construction in 1897. A typically ornate neo-Gothic terracotta pile, it was built by the Cardiff Railway Company and perfectly emobodies the wealth and optimism of the Bute family and their docks. If you’re looking for a thrill hop on the colourful carousel which spins in front of the building and offers spectacular views over the Bay below. 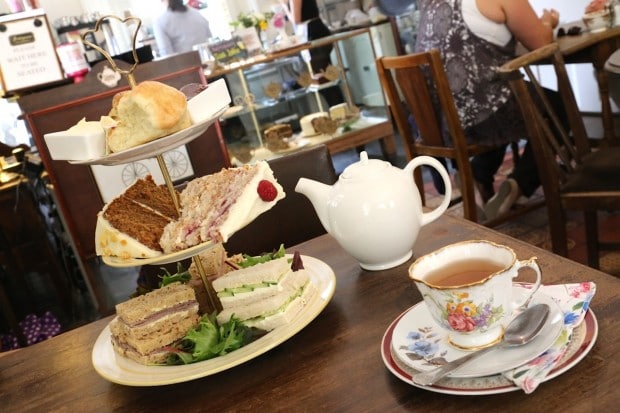 Pettigrew Tea Room is named in honour of Mr Andrew Pettigrew who was employed as Head Gardener to the Marquess of Bute at Cardiff Castle from 1873 to 1903. Located in the heart of Cardiff within Bute Park, the cute little tea house is located in an old stone building, a haven for those looking to relax away from the noise of the city.

Order the traditional afternoon tea and you’ll receive a three tiered platter featuring scones (clotted cream, fresh strawberry preserves), a petite sandwich trilogy (cucumber and cream cheese, roast beef and horseradish aioli, ham and mustard) and select two slices of cake from the antique glass display case up front (I opted for carrot cake and a lovely coconut and raspberry slice). They have a wide selection of loose leaf tea’s to chose from so sipping through your afternoon snack is a real pleasure. Afternoon tea is a must wherever you go in the UK. You may want to try afternoon tea sevenoaks, if you are visiting the local area.

For a relatively small capital Cardiff’s gay nightlife seriously impresses. Three of the top bars are all clustered smack dab in the city centre on Churchill Way. Start off your evening at The Kings with a pint of Strongbow, they’ve got a great rooftop patio teaming with picnic tables which makes a warm summers night ideally al fresco. Just up the street you’ll find WOW Bar where hilarious drag queens mince about offering a tray filled with shots to those meandering on the street. Pulse is a wee nightclub located directly across the street and is where all the locals come to dance into the wee hours of the evening while sipping gay cocktails. The space features two stories of seating, glittering disco ball and a collection of leather wrapped booths which make people watching a pleasure.