Komaneka Resorts are a collection of sophisticated boutique hotels located in Ubud. Each is carefully created to fulfill travelers’ expectations of upscale luxury lifestyle, in a spacious hotel room or villa, surrounded by the natural beauty of Bali and looked after by Komaneka’s professional staff to make you feel like you’re at a home away from home. 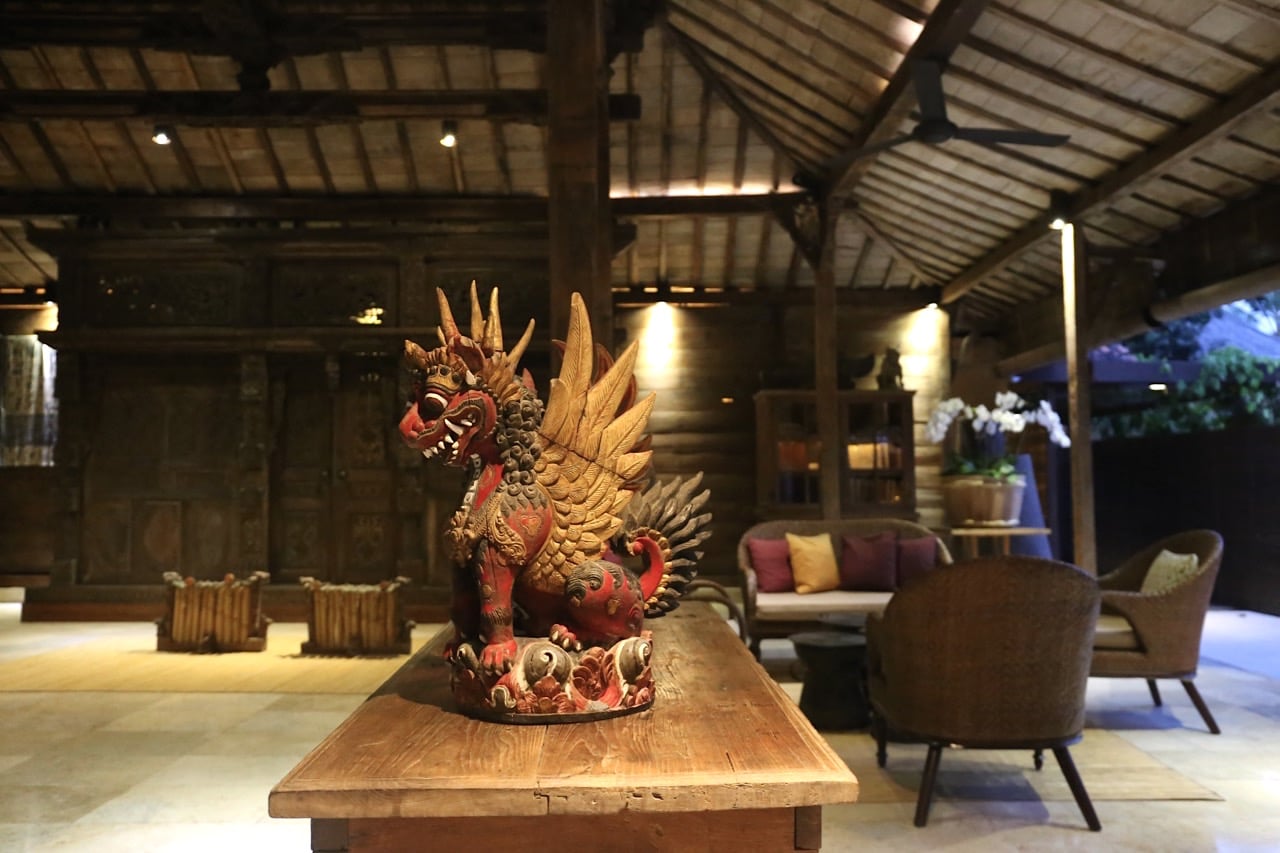 Komaneka is a family-owned business, founded, designed, and run by a young couple from Ubud. It all began as a fine arts gallery, specializing in high-end Balinese and Indonesian art. Rooms were added as an artists’ residence. But it soon attracted visitors, and the founders decided to make Komaneka a hotel, today known as Komaneka Monkey Forest, named for its address on the famous shopping-and-eating street Monkey Forest Road, which stretches from Ubud Palace at the centre of town to a sacred monkey forest at its southern end. The Komaneka Fine Art Gallery remains one of the most important in Bali; and the hotel is still a tranquil oasis in shady gardens. 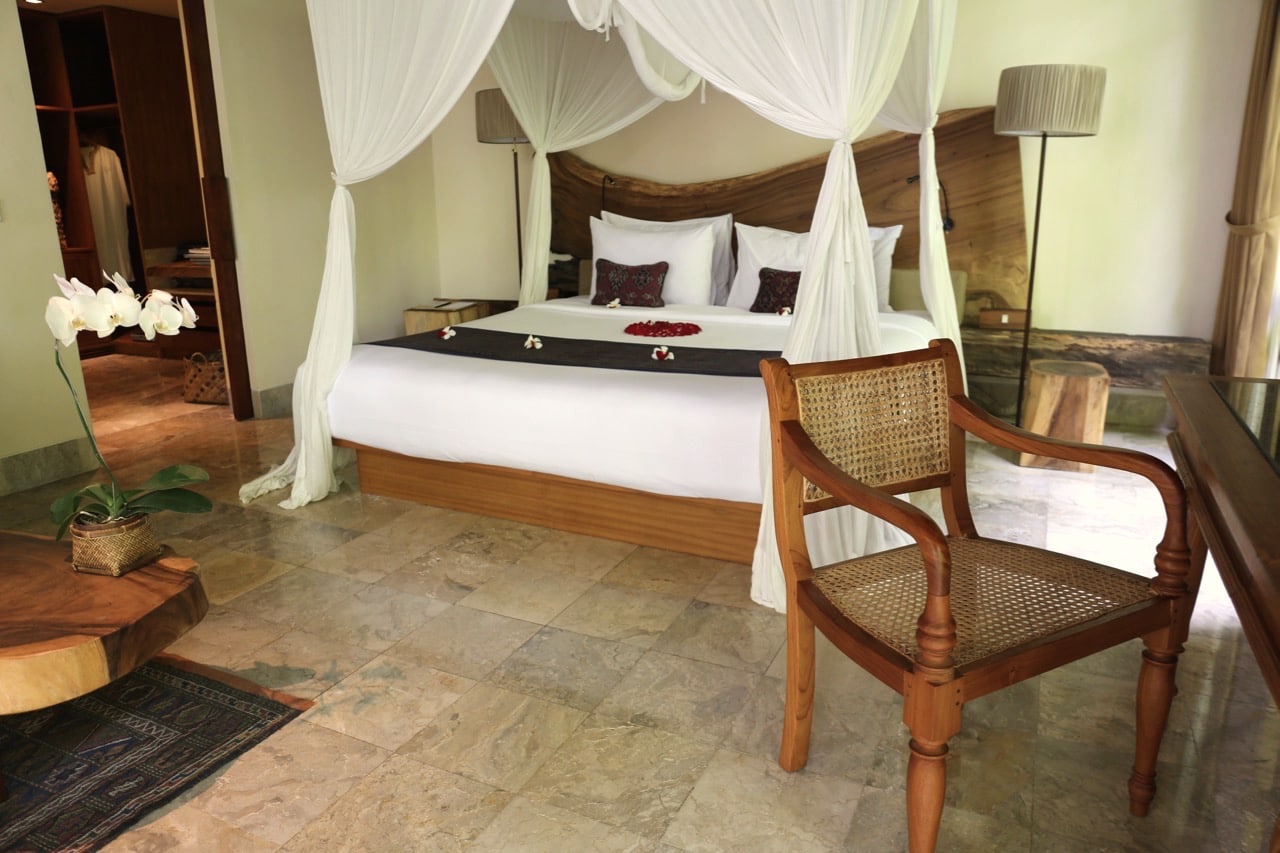 Komaneka Tanggayuda is the brands finest property, beautifully situated amidst five hectares of tropical forest at the edge of a neighbouring village, with views to a sacred volcano. Throughout the grounds you’ll find tall tropical fruit trees, offering shade and invigorating the air.

Here the architecture is bold, spacious, and contemporary. Most of the rooms are pool villas, with complete privacy and luxurious interiors. The prestigious Bale Daja Residence is a two-story villa with large L-shaped pool and expansive living spaces. 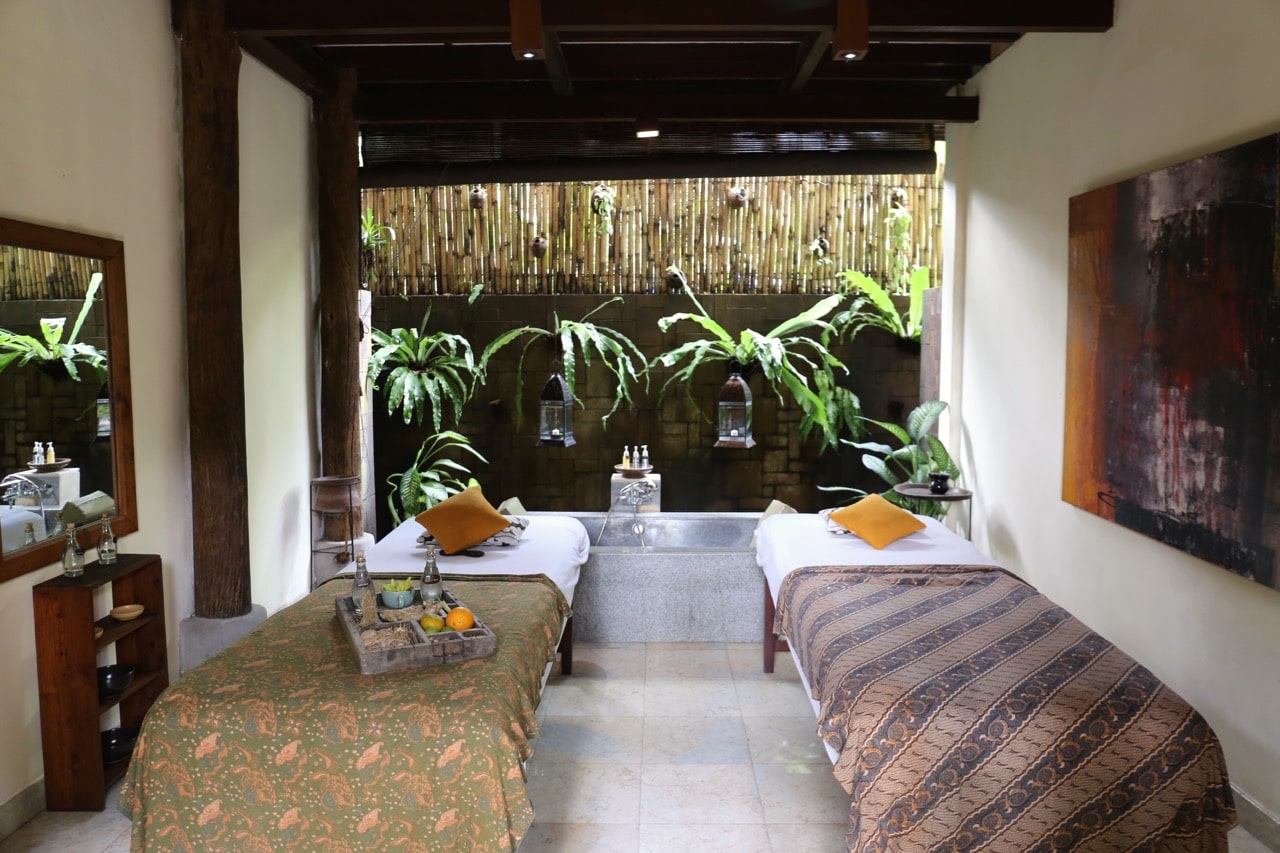 Tirta Wangi Spa is named for the water features in the garden of the spa. Tirta means ‘holy water’ in Balinese, and wangi means ‘fragrant’, a reference to the heady scent of spices used in the spa treatments. The spa villa sits among luscious tropical gardens, creating an atmosphere of tranquility and fresh air. A Jacuzzi pool is sheltered under a pretty Balinese pavilion in the garden courtyard. 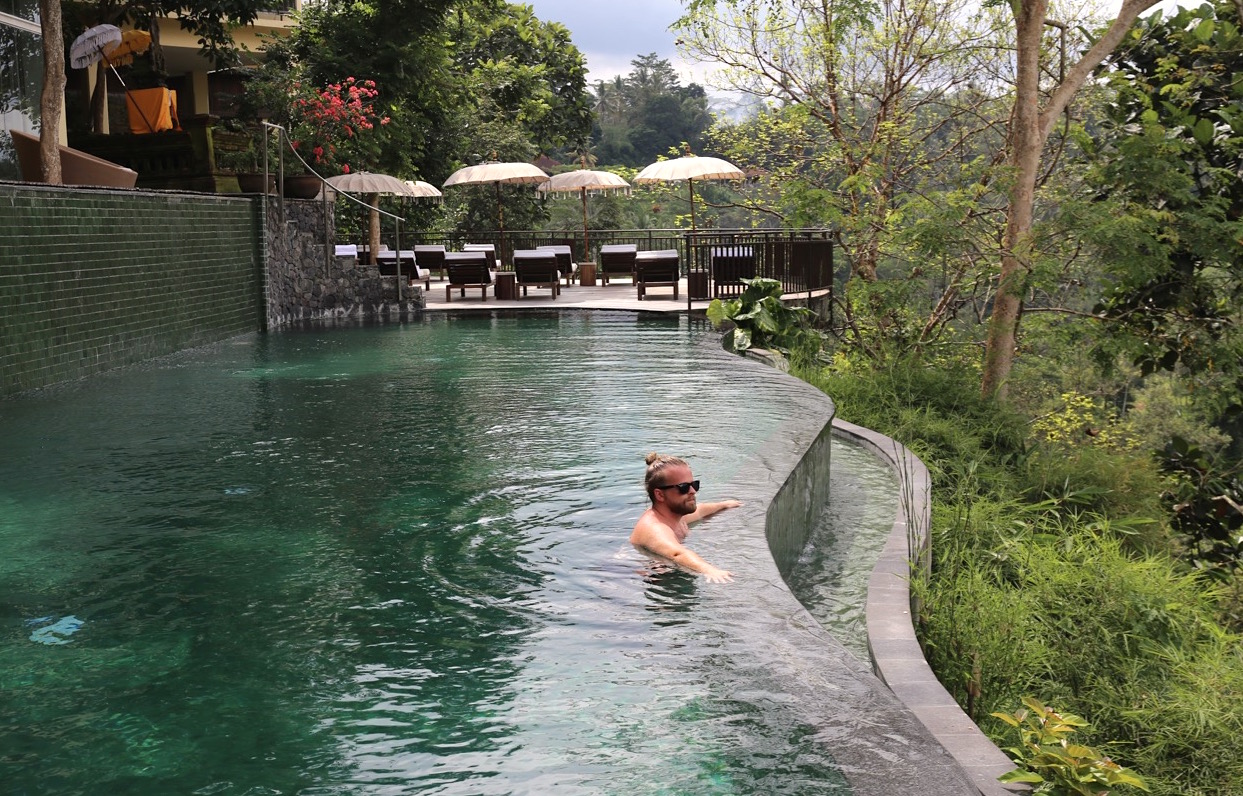 The resort’s most instagram-worthy feature is its jaw-dropping infinity pool which sits below Batukaru Restaurant (so a slippery cocktail or plate of steaming satay skewers are never far away). The best time of the day to enjoy a swim is in the afternoon when temperatures reach their peak. Cozy up to the pools edge, stare out at the lush jungle below and you’ll quickly find yourself smiling back at Mother Nature. 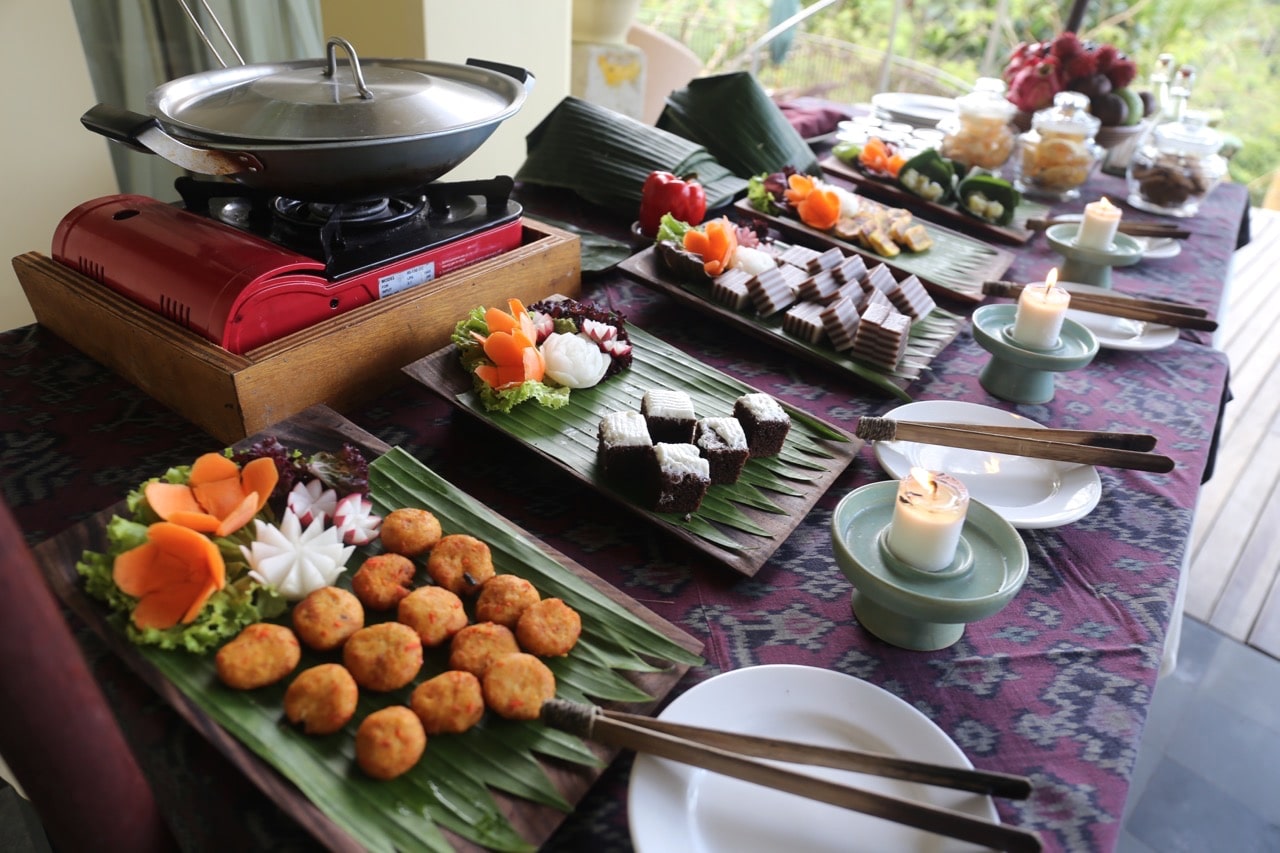 Afternoon tea is served daily, buffet-style on the deck above the pool. The culinary team offer a whimsical take on the British tradition by offering a selection of top notch loose leaf and smorgasbord of Balinese sweets and savouries with highlights including spicy crab cakes and glutenous rice chocolate cake. 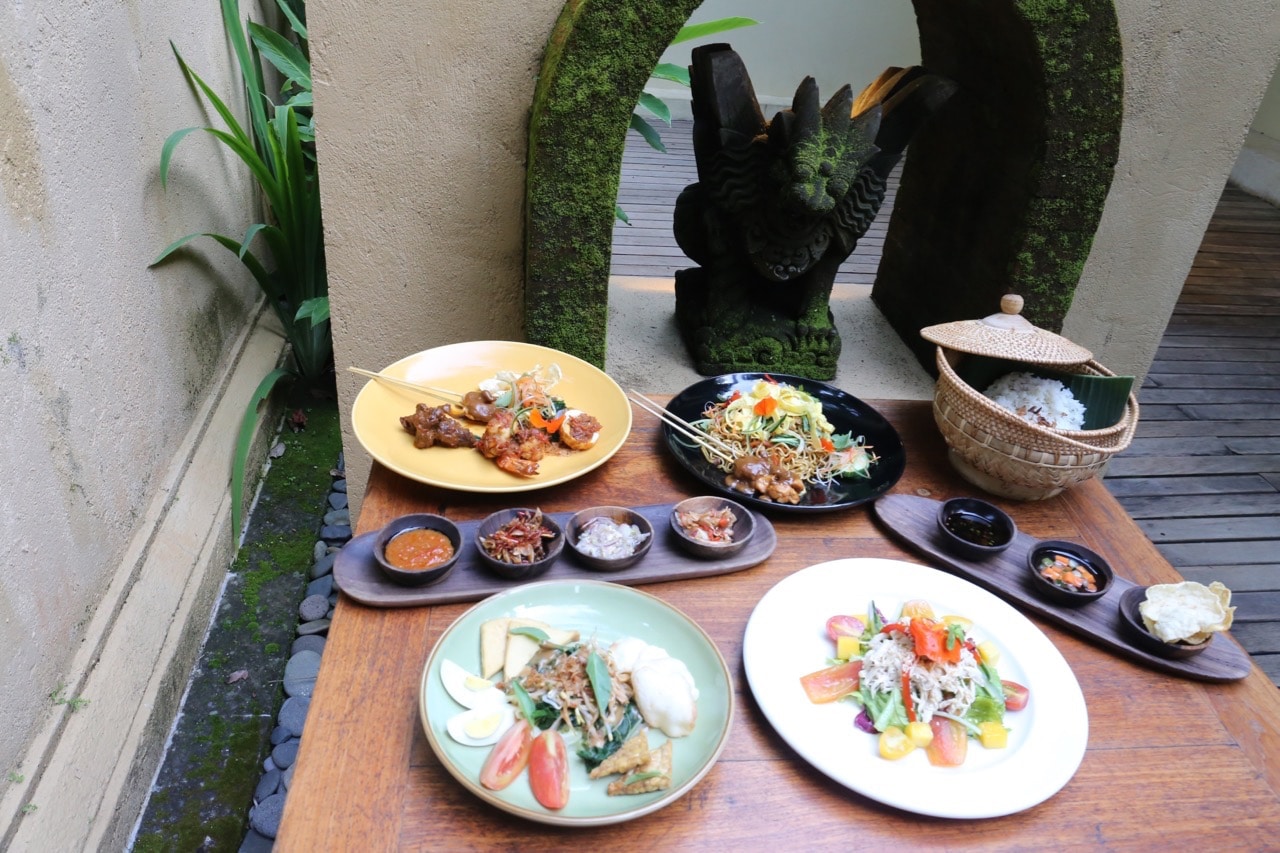 Komaneka’s Executive Chef Bagiana offers guests a taste of the richness and complexity of Balinese and Indonesian cuisine with traditional specialties. Signature dishes include Pepes Ikan (spiced fish grilled in banana leaf) and Iga Babi (grilled pork ribs in Balinese spices). Guests can enjoy meals at the the resort’s signature Batukaru Restaurant or simply ask their butler to set up a fine feast in the privacy of their villa. 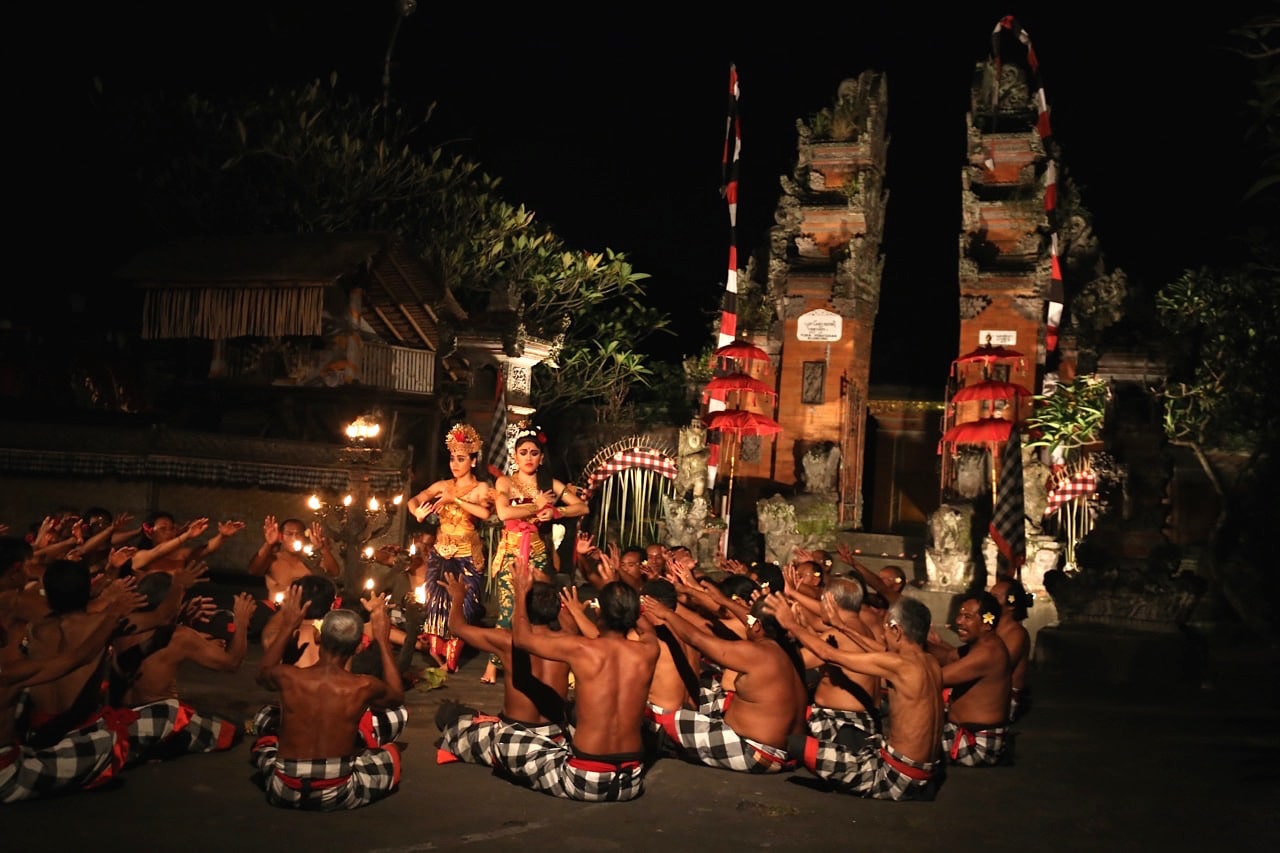 If you’re keen to explore the cultural highlights in and around Ubud it’s best to start by spending one evening watching one of the village’s iconic cultural performances. Ubud is a must-do for dance and theatre fans, with most visitors spending a good part of their evenings at one of the numerous shows that are staged every night at various temples around town.

Bali’s most famous show (which dramatically appears in the classic documentary Baraka) is called Kecak and has roots in sanghyang, a trance-induced exorcism dance. Also known as the Ramayana Monkey Chant, this moody Balinese dance and drama was developed in the 1930s. The 90 minute spectacle is performed by a circle of at least 150 performers wearing checked cloth around their waists, chanting “cak” while moving their hands and arms as a dramatic choir. The indigenous a capella offers a soundtrack for the ancient Hindu tale Ramayana. 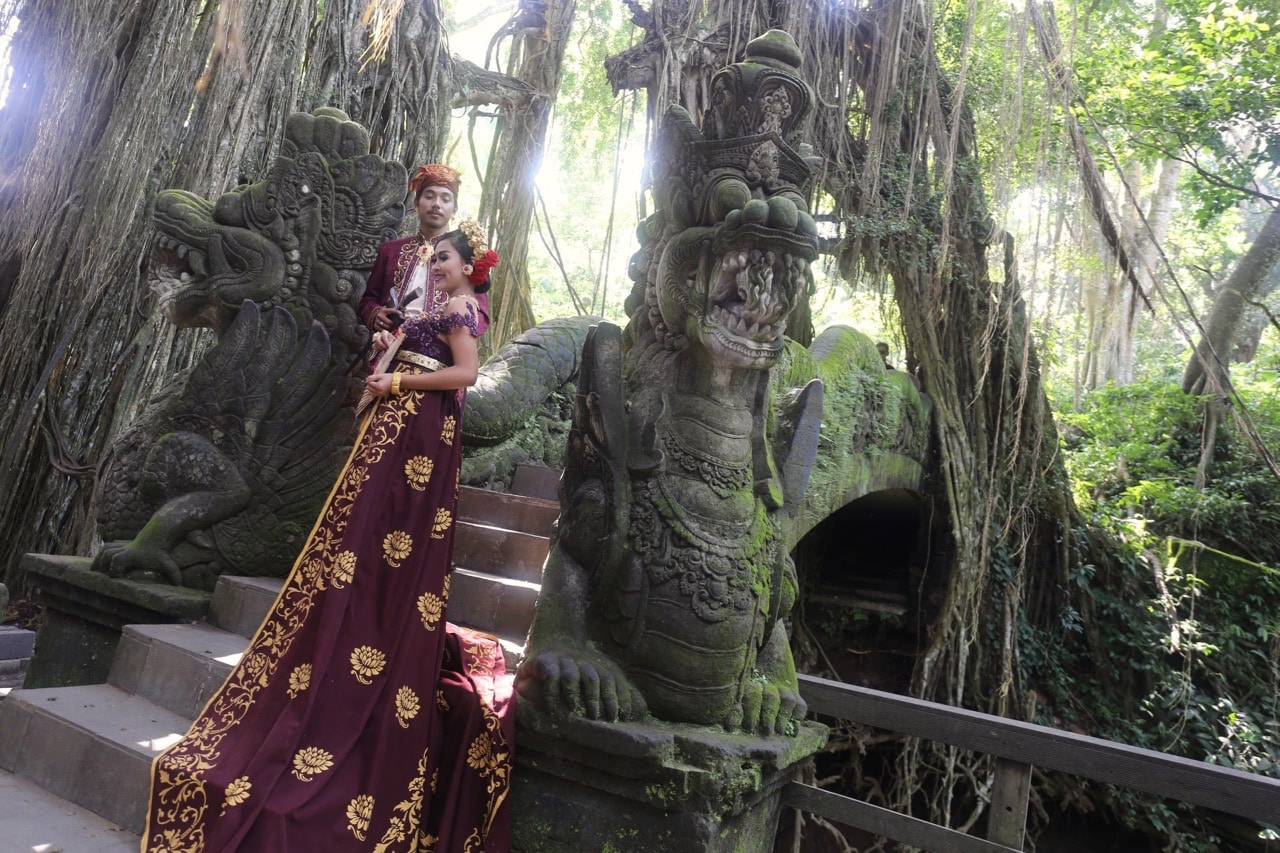 The Ubud Monkey Forest is a nature reserve and Hindu temple complex which lies within the village of Padangtegal. The Monkey Forest covers 27 acres and contains at least 115 different species of trees. The park is heavily forested and hilly, a deep ravine runs through the park grounds, at the bottom of which flows a bustling stream. The grounds are home to three Hindu temples all constructed around 1350. You’ll find plenty of playful Balinese long-tailed monkeys who swing, run and hop around the ancient sculptures and facades which makeup Bali’s most playful outdoor museum. 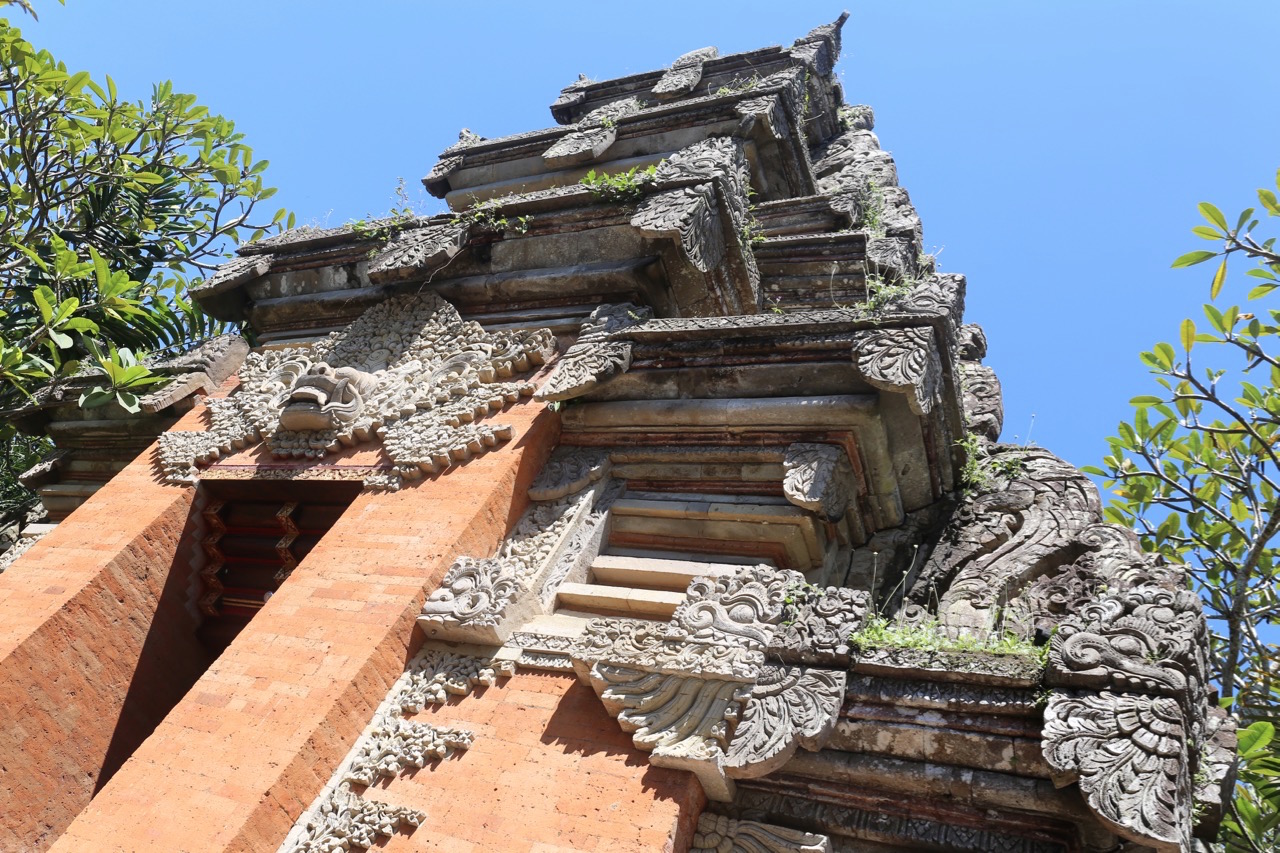 The Ubud Palace (Puri Saren Agung) was the official residence of the royal family of Ubud and dates back to the 1890s. The compound was mostly built after the 1917 earthquake and the local royal family still lives here. Take time to appreciate the stone carvings, many by noted local artists such as I Gusti Nyoman Lempad. 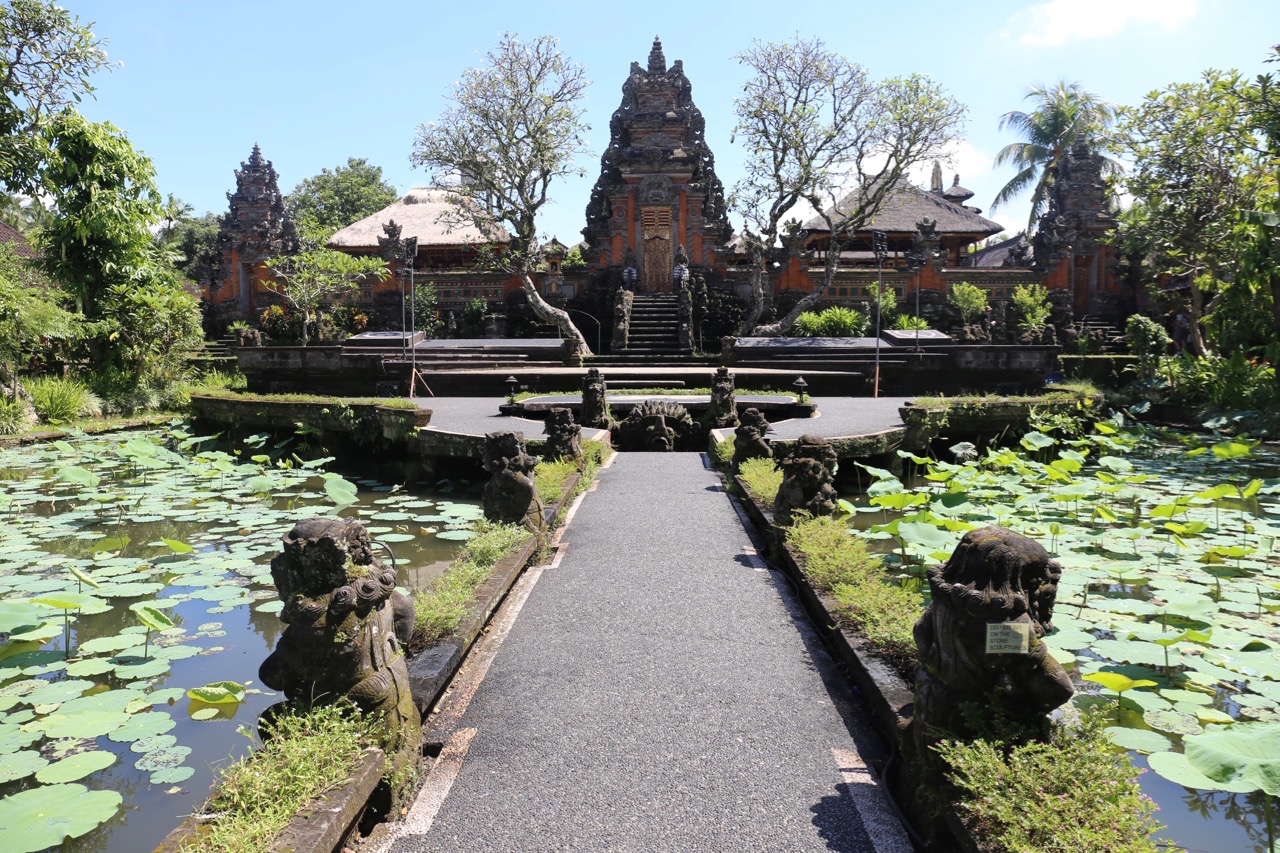 Take a short stroll down the street from Ubud Palace and you’ll happen about Saraswati Temple, famed for being romantically flanked by lily ponds. You can enter the temple behind its amphitheatre at any time of the day and admire the calming atmosphere, architectural features and sandstone bas reliefs that honour the Hindu goddess of knowledge and arts, Saraswati.

In the evening drop into Café Lotus for a minimum dinner cover charge of around $15 USD, which will get you the best view over the lotuses and to the temple’s open stage, where dance performances are held each night starting at 7:30pm. 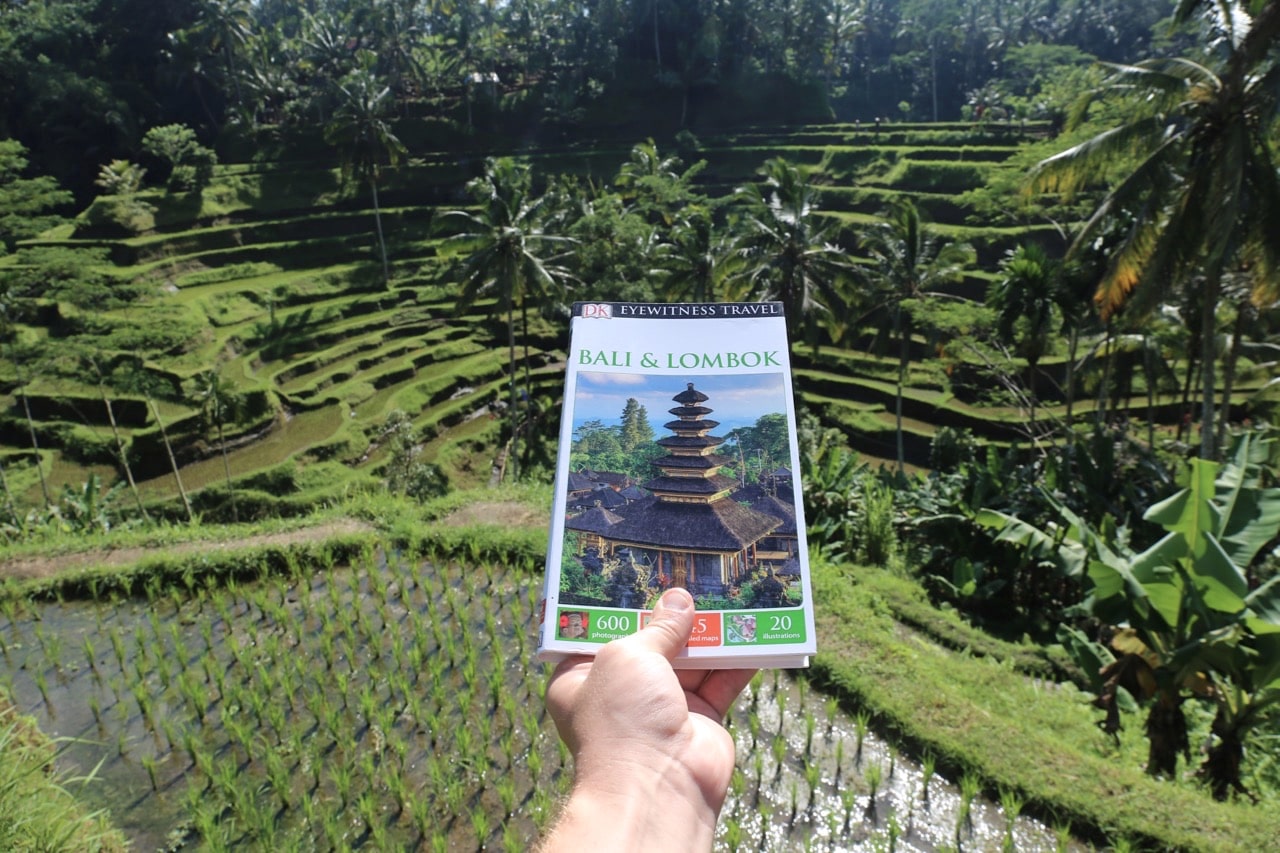 If you’re keen to explore rural Bali head north for a road trip featuring three of the island’s top attractions. Most tours make their first stop just outside of the city limits at Tegallalang Rice Terraces. You’ll find yourself standing in a postcard, surrounded by hundreds of rice paddies involving the subak (traditional Balinese cooperative irrigation system), which according to history, was passed down by a revered holy man named Rsi Markandeya in the eighth century. 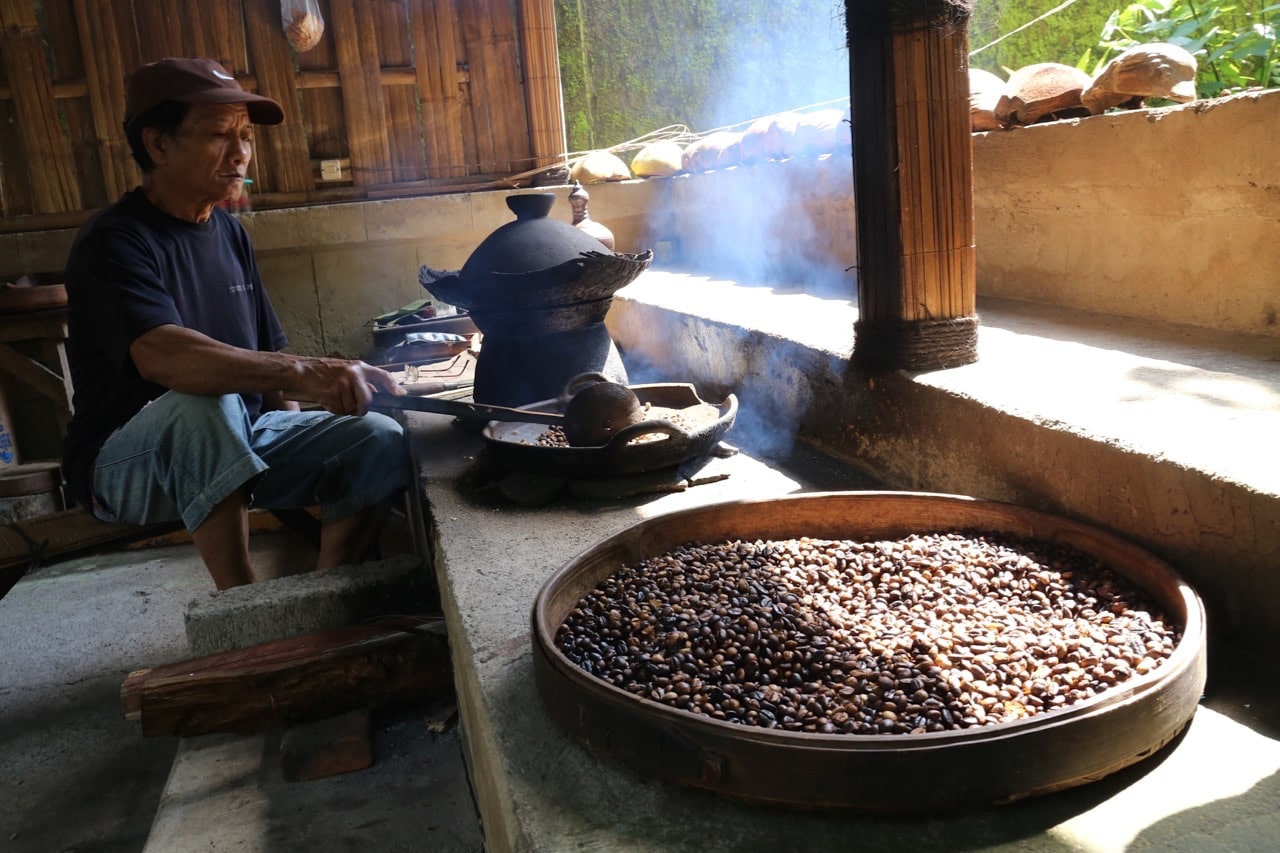 Drive deeper into the interior and you’ll find winding roads dotted with farms that specialize in harvesting Indonesia’s most talked about export. Kopi Luwak is the world’s most expensive cup of coffee. The steep price point (anywhere from $15-50 a cup) is attributed to the fact that the beans are sourced from partly-digested coffee cherries eaten and defecated by the Asian palm civet. The final product once it arrives in your cup has a light but distinctive aroma and has a refined taste on the palate, sometimes referred to as the ‘Champagne of coffees’. Pop by a local Kopi Luwak farm and you’ll enjoy a short tour through the farm, meet the infamous monkey (which is actually a cat), watch as the beans are roasted and enjoy a cupping experience. You’ll be skipping out of the woods with eyes bulging, maxed out on caffeine. 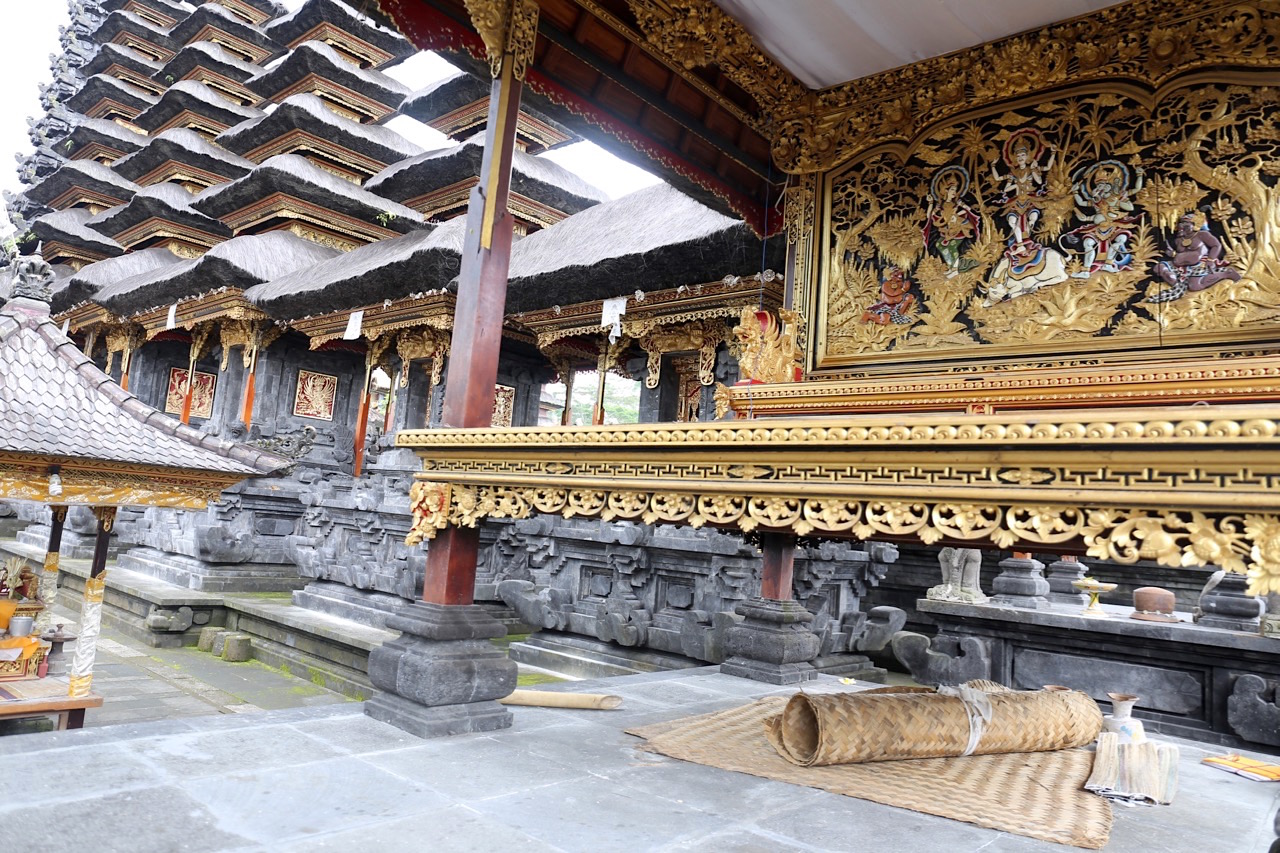 Pura Besakih is Bali’s ‘mother temple. With a photogenic location, 1000m up the flanks of Gunung Agung, Pura Besakih is actually a complex of 35 separate, but related, religious structures, which only narrowly escaped destruction during the devastating eruption of the volcano in 1963. The temple bursts to life during its colourful festivals – particularly during Odalan, the temple’s anniversary, which falls in the 10th month of the Balinese calendar (usually April).