Brooklyn, the “Borough of Homes and Churches,” is one of the five boroughs of New York. It used to be and still feels much like a city in its own right, with approximately 2.5 million inhabitants. Fun Fact: if separated from the rest of New York City, Brooklyn would be the 4th-most populous city in America!

In the last decade Brooklyn has enjoyed a period of growth and affluence not seen since before World War II. Lena Dunham’s popular Girls on HBO is filmed throughout Brooklyn and has inspired fans of the show to swoon for the hoods hipster haunts just like Jessica Parker did years ago for Manhattan via Sex in the City.

Whether you’re enjoying a quick weekend away or want to bounce around Brooklyn for a long term stay there are plenty of sights, smells and sounds that will have you quickly falling in love with NYC’s coolest creative community.

10 Things to Do in Brooklyn 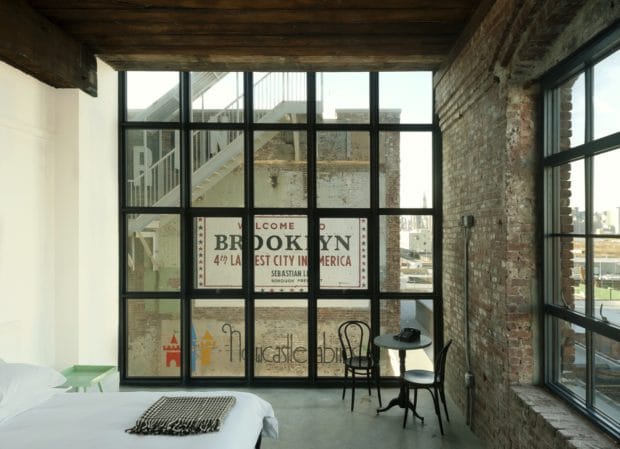 Sweet Suite at the Wythe Hotel

Located in the heart of Brooklyn, the Wythe Hotel is an 8-story hotel on the Williamsburg waterfront. Built in 1901, this former cooperage has been meticulously converted into a 70-room hotel offering service and amenities yet to be seen in the borough, while the building’s industrial character – including its concave corner entrance, original pine beams, masonry, arched windows and cast-iron columns – has been beautifully preserved. 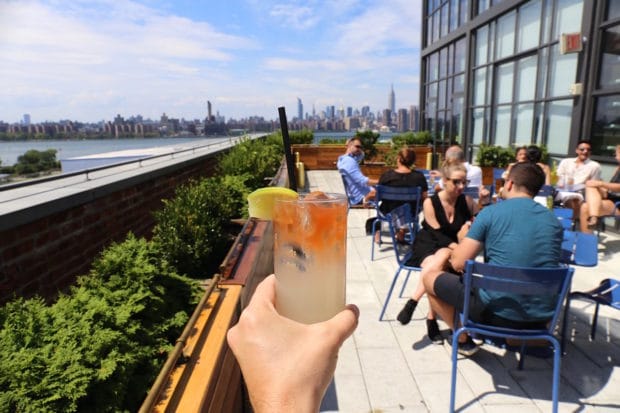 Cocktail Sips at The Ides

Take an elevator up to the 6th floor of the Wythe Hotel and enjoy a classic cocktail at The Ideas rooftop and terrace. The now iconic al fresco space offers a menu perfect for midday snacking featuring a slick list of craft cocktails and munchie-tastic bar bites featuring salted caramel popcorn, shrimp cocktail and sweet S’mores. 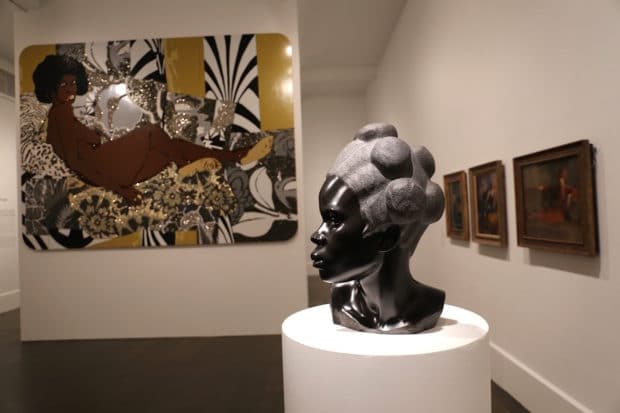 Housed in a fine Beaux Arts building, The Brooklyn Museum is the second-largest art museum in New York after the Metropolitan Museum of Art, which is reason enough to visit. But it also houses one of the most impressive collections of ancient Egyptian art as well as works by Georgia O’Keeffe, John Singer Sargent and George Bellows.

Other Fun Facts: The Elizabeth A. Sackler Center for Feminist Art is the first public space of its kind in the country. The museum made history as the first American museum to exhibit African objects as artwork. Every Thursday night the museum hosts a free party from 6-10pm featuring art, music, dancing, food and drinks. 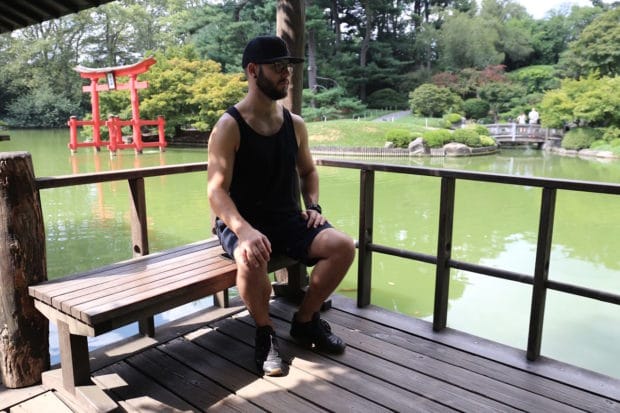 Those searching for a little peace and quiet would do well to spend a few hours at this verdant oasis. The Brooklyn Botanic Garden offers visitors 52-acres of natures beauty. Designed by the Olmsted brothers in 1910, the Brooklyn Botanic Garden is home to more than 12,000 plantings. It’s best known for the Cranford Rose Gardens, where thousands of roses cascade down arches and climb lattices, and the authentic Japanese Hill-and-Pond Garden, planted in 1915. Pop by the Steinhardt Conservatory and you’ll find tropical and desert plants, and a large bonsai collection. 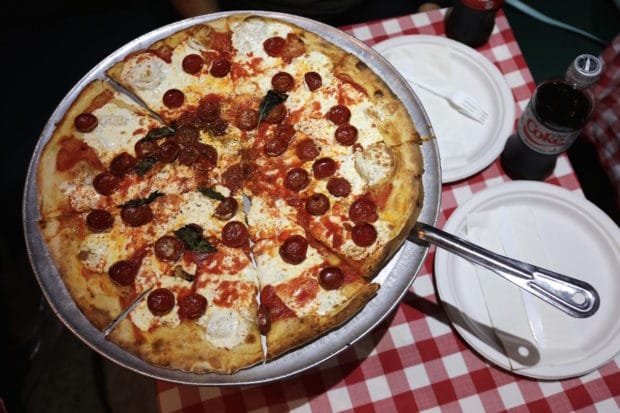 You’ll recognize Grimaldi’s, for the long line snaking out the door. Diners are willing to wait for the coal-fired, brick oven pizza, some of the best in the city. It is known for its crispy and smoky crust, fresh mozzarella, sweet tomatoes and crispy pepperoni. Grimaldi’s has called Dumbo home since the 90s, although it only recently moved into its new location in a historic old bank building, a stones throw from the Brooklyn Bridge. And as the sign says above: cash only and no slices (only pies). 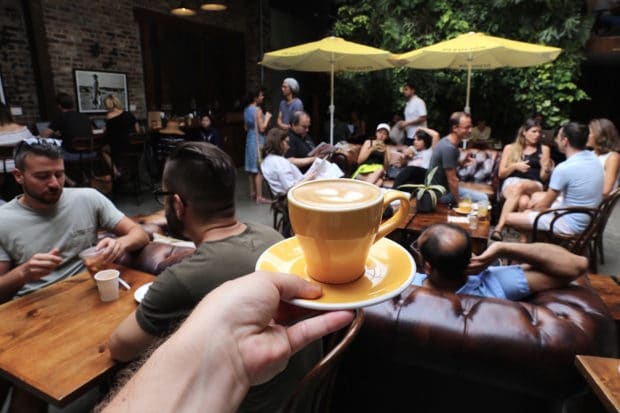 If you’re a java junky head to Devocion in Williamsburg. It’s the only farm-to-table coffee company in the world, sourcing its beans from remote farms in Colombia with a mandate to develop relationships with coffee growers, paying above fair-trade prices, and establishing social and environmental programs to secure their future. The beans are dry milled in Bogota and shipped to the US 10 days after green for roasting, making it one of the freshest cups of coffee you’ll find in NYC.

The centrepiece of the façade is a tall recessed doorway with raw steel and glass doors through which the roasting room can be seen. Guests pass this space as they enter, and as they do they can observe the roaster at work through gallery windows and breathe in the addictive aroma of fresh coffee. The café’s main room is a soaring open-plan day-lit space with a serving counter at one end and a stunning two-story vertical garden on the far wall featuring plants from Colombia. 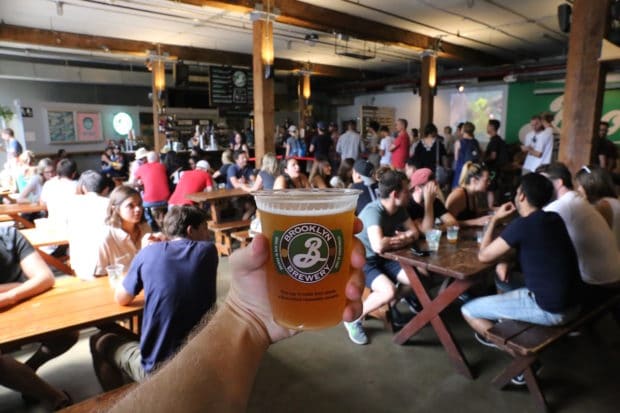 After buzzing on beans enjoy a short walk through Williamsburg and quench your thirst at the city’s iconic Brooklyn Brewery. This place gets packed on weekends as locals and tourists alike line up for brewery tours or simply hang out in the picnic table adorned Tasting Room where you can grab a few glasses of fresh brew. If you’re a newbie to the beer brand start with the signature Brooklyn Lager before adventuring through Defender IPA, Brooklyn Greenmarket Wheat and Hecla Iron Ale. 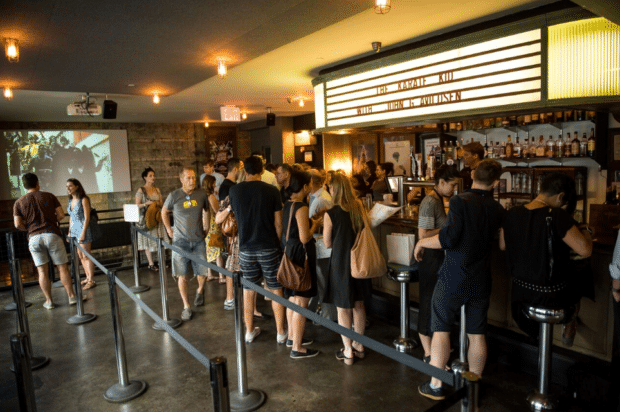 Every Nitehawk cinematic experience strives to enhance the audience’s viewing with a creative framework whether by creating a specialty menu with fresh, local house-made ingredients inspired by the film, a live band accompaniment or special guest Q&A. Arrive early and you’ll enjoy a thirty-minute pre-show which provides guests with ample time to get settled in their seats and place food or drink orders. 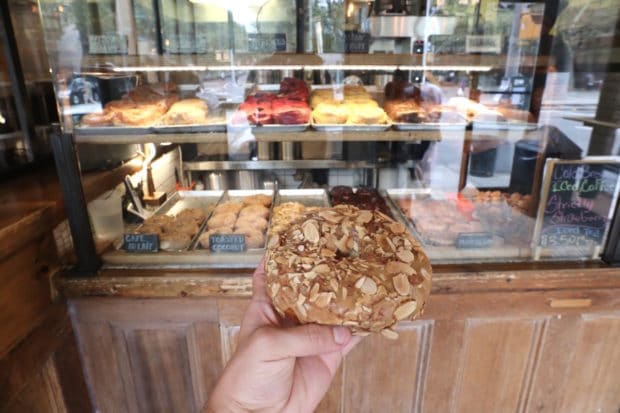 Dough was founded in 2010 by Chef Fany Gerson, as a celebration of the doughnut. Inspired by her Mexican heritage as well as European influences, Fany set out to craft an iconic version of this classic treat. Dough’s doughnuts are made with a brioche-type dough prepared in small batches throughout the day so customers always get the freshest doughnuts possible.

Latin American culture and tradition was the primary inspiration for many of Dough’s signature flavours. Having grown up with hibiscus, for example, Fany incorporated this distinctive flavour into her product line and it quickly became one of her signatures. Themes of tropical fruit interlace with traditional Latin American staples, like chocolate chipotle, tropical chile, passion fruit and dulce de leche. 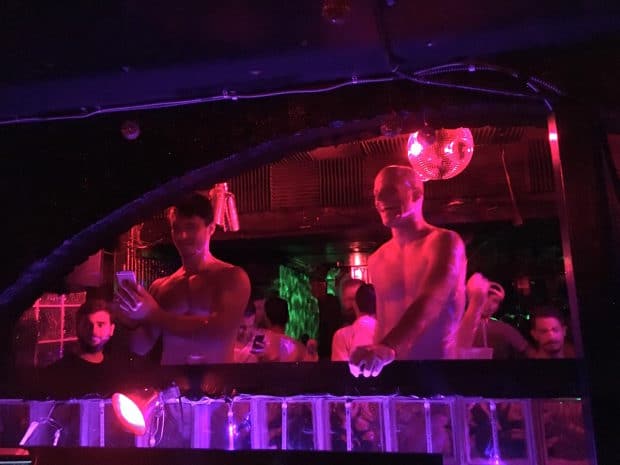 Metropolitan is one of Brooklyn’s original gay bars which changed the face of Williamsburg when it opened in October of 2002. During the chilly winter months they’ve got two roaring fireplaces to keep warm so bundle up on a sofa and sip slowly. In the hot ass summer you’ll find the outdoor patio gets packed while go-go dancers and Drag Queens swirl and sway in front of the DJ.