Jessie Eisenberg and Alexander Skarsgard play cousins Vincent and Anton Zalesky in the latest from Academy Award nominated director Kim Nguyen. Enjoying its world premiere at the 2018 Toronto International Film Festival, The Hummingbird Project shares the story of two scheming cousins who try to build a thousand-mile-long, four-inch-wide fibre-optic cable tunnel from Kansas to New Jersey that will give them a one-millisecond edge on transactions at the New York Stock Exchange.

The immensely ambitious scheme will gain them and their clients crucial seconds in order to trounce competitors, generating an expected revenue of over $500 million a year. Vincent (Eisenberg) is the force behind the scheme, a frantic dreamer who pursues his ideas with obsessive intensity. Anton (an unrecognizable bald Skarsgard) plays the crazy geniuses, a socially awkward computer nerd who is tasked at crunching code that will make their data delivery time the most competitive on Wall Street. 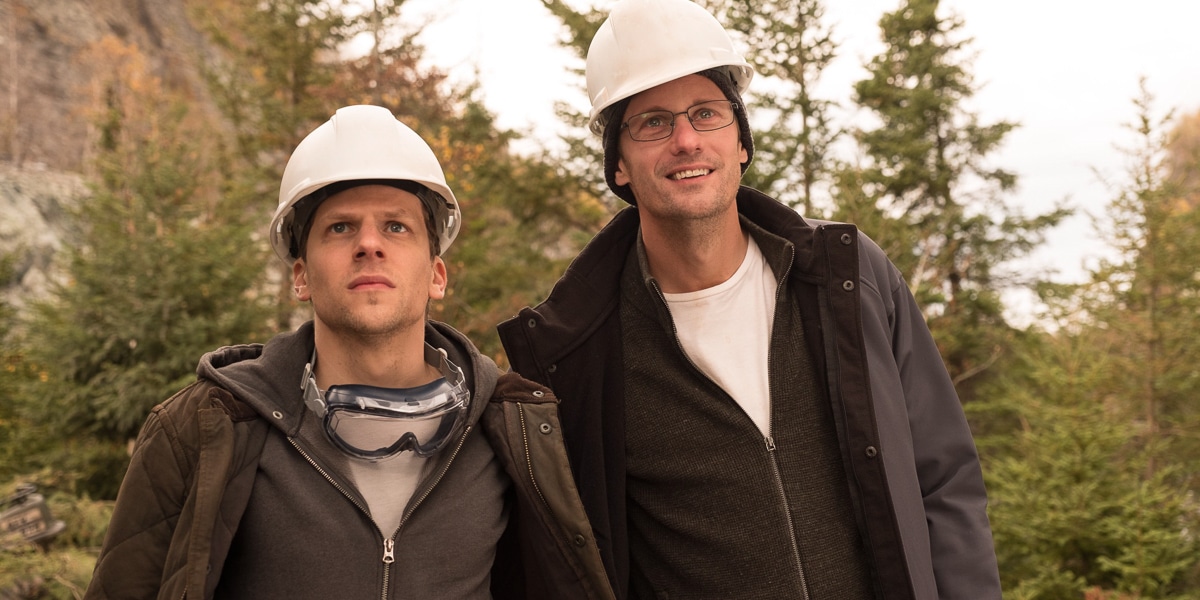 The duo end up in the crosshairs of their badass ex-boss Eva Torres (Salma Hayek), a Wall Street bull willing to destroy anyone who gets in her way. Vincent is driven to exhaustion, desperate to escape his working-class roots by any means possible. His character’s ambitions are the perfect embodiment of American greed, regularly putting his thirst for big money before his health, family, the environment, and fellow human beings.

There’s one poignant moment in this tragicomedy that makes Vincent pause in disbelief. When he realizes he needs to run the cable underneath an Amish farm in Pennsylvania he marches up to a big barn door and tells the community how he is keen to bring prosperity to their families through high speed technology. The situation forces the audience to burst out laughing, as greedy Vincent has finally met his match. He’s infuriated when the simply dressed Amish elder passes on payment, telling the young tycoon-wannabe, “We don’t care about money. High speed isn’t a priority here. We’re enriched by the love of God and our love for community.”

Once Vincent realizes his old boss is onto his scheme, his mental state slides into constant paranoia. Racing to finish the tunnel on deadline with his million dollar backers breathing down his neck, Vincent spreads himself so thin that only when his body breaks is he able to reconcile the deep shit he’s in.