Anchored by a great cast and some beautiful direction, Outlaw King makes the most of its Scottish, war-torn backdrop.

As a giant history nerd, I was going to enjoy Outlaw King no matter what. That doesn’t take away from the objective truth that the film is a flawed period piece that features some outrageous fight scenes and great chemistry between what’s ostensibly the two lead characters.

Enjoying its world premiere at the 2018 Toronto International Film Festival, Outlaw King focuses on the fight for Scottish independence led by Sir Robert the Bruce from King Edward and the English army. The film begins with William Wallace forced into hiding after his rebellion is crushed at the battle of Selkirk. Bruce and other Scottish lords have capitulated to King Edward and England pretty much owns Scotland for lack of a better term. The film follows Bruce’s journey as he breaks “peace,” with England and ignites a second, successful rebellion.

As a film, it’s impossible for Outlaw King to cover a few hundred years of history in two hours and ten minutes. But as a both a standalone narrative and a chapter in Scottish history, director David Mackenzie (from the underrated Hell or High Water) does an admirable job of telling a story worth caring about.

If you know anything about the time period (1304-1306), the story beats could feel familiar and it’s pretty easy to guess where the narrative is going. But a slew of awesome performances keep the uneven pacing bearable and Chris Pine, sporting a matted and muddy mullet thing, plays brooding scotsman with ease. His accent wavers throughout, but in the scenes where it counts emotionally, he’s able get there. More surprising is his [second wife] Elizabeth de Burgh played by the fantastic Florence Pugh. It’s an arranged marriage that’s supposed to help solidify the relationship between England and Scotland. 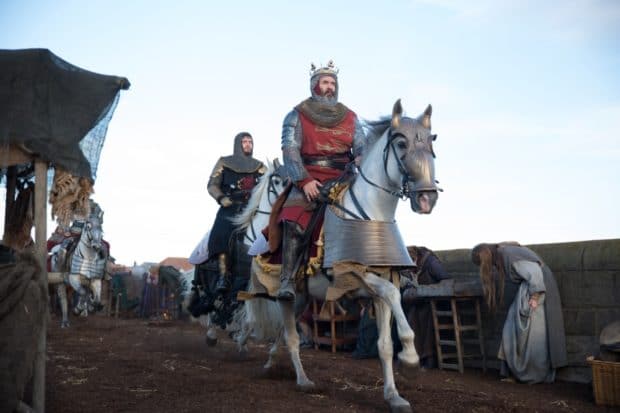 Their relationship has an interesting arc beginning with the fact that they want nothing to do with one another. Bruce is still mourning the death of his first wife and de Burgh, well, I wouldn’t want to be there either. But throughout the film they come to respect each other and ultimately have a tender relationship that felt believable. Pugh steals every scene she’s in, giving the eventual Queen of Scotland a distinct personality and never once borders on damsel in distress.

And if you want to talk about scene stealers, Aaron Taylor-Johnson shows up periodically as James Douglas, a psychotic foot soldier with a score to settle with the English. He’s only on screen for about 10 minutes overall, but Taylor-Johnson is so animalistic and bombastic, you can’t help but sit up in your seat.

There’s no denying Outlaw King is a beautiful film. And it’s almost a guarantee, given the landscape Scotland has to offer, that the film would be shot well. Cinematographer Barry Ackroyd balances the great expanse of the Scottish countryside with those intimate and often brutal moments of combat. Like I mentioned off the top, there’s a pretty cool one-take shot that opens the film and lasts for a good 12 minutes. In an era where the one-take has become a game of oneupmanship, Mackenzie’s feels lowkey and subtle.

Speaking of the battle scenes, they’re spaced out well, giving each one room to breathe. When they do erupt, beginning with a terrifying nighttime ambush, they arrive fast and heavy. The CGI blood is more noticeable than I’d like, and because Outlaw King chooses to get real gory with the action, it’s a hard thing not to notice.

Overall, Mackenzie—who also co-wrote the script—stay pretty faithful to historical record. This being Hollywood, some artistic license was taken, but beside some strange lead character, hero worship stuff, the film does a great job of giving a sense of what things could have been like back then.

Outlaw King arrives on Netflix November 9, and if you’re in the mood for a sweeping historical epic that’s surprisingly intimate and character driven, you can’t go wrong with this one. And yes, Chris Pine gets butt naked for roughly 30 seconds. Is Outlaw King worth watching just for the dong shot? You’ll have to watch for yourself.