Every so often there comes a hero that changes everything. A new take on an established idea. A hero who paves the way for others. With 51 years under his belt, Marvel’s Black Panther has indeed had a tremendous impact on comics, the superhero landscape, and the world at large. At a time when representation and diversity weren’t a major concern for mainstream media, Black Panther was a symbol of how things could be different. With the celebration of Black History Month taking place this month, now is the perfect time to look at the rich backstory of over 50 years of Black Panther’s history in Marvel’s comic books via Black Panther: The Ultimate Guide (DK Publishing, 2018).

Making his debut in 1966 in issue #52 of Fantastic Four, Black Panther was created by Stan Lee and Jack Kirby. His real name was T’Challa and he was the king of the fictional African nation of Wakanda. While his powers include heightened senses, speed, strength, reflexes, durability, and a cybernetically enhanced vibranium suit, his real powers were his intelligence and courage. The thing that set Black Panther apart from other heroes of colour of the time was that he wasn’t just a sidekick or a minor character. He was brilliant, rich, and powerful, but he was also an accepted equal of his white contemporaries (and in some instances, superior). He was a character that kids could aspire to. 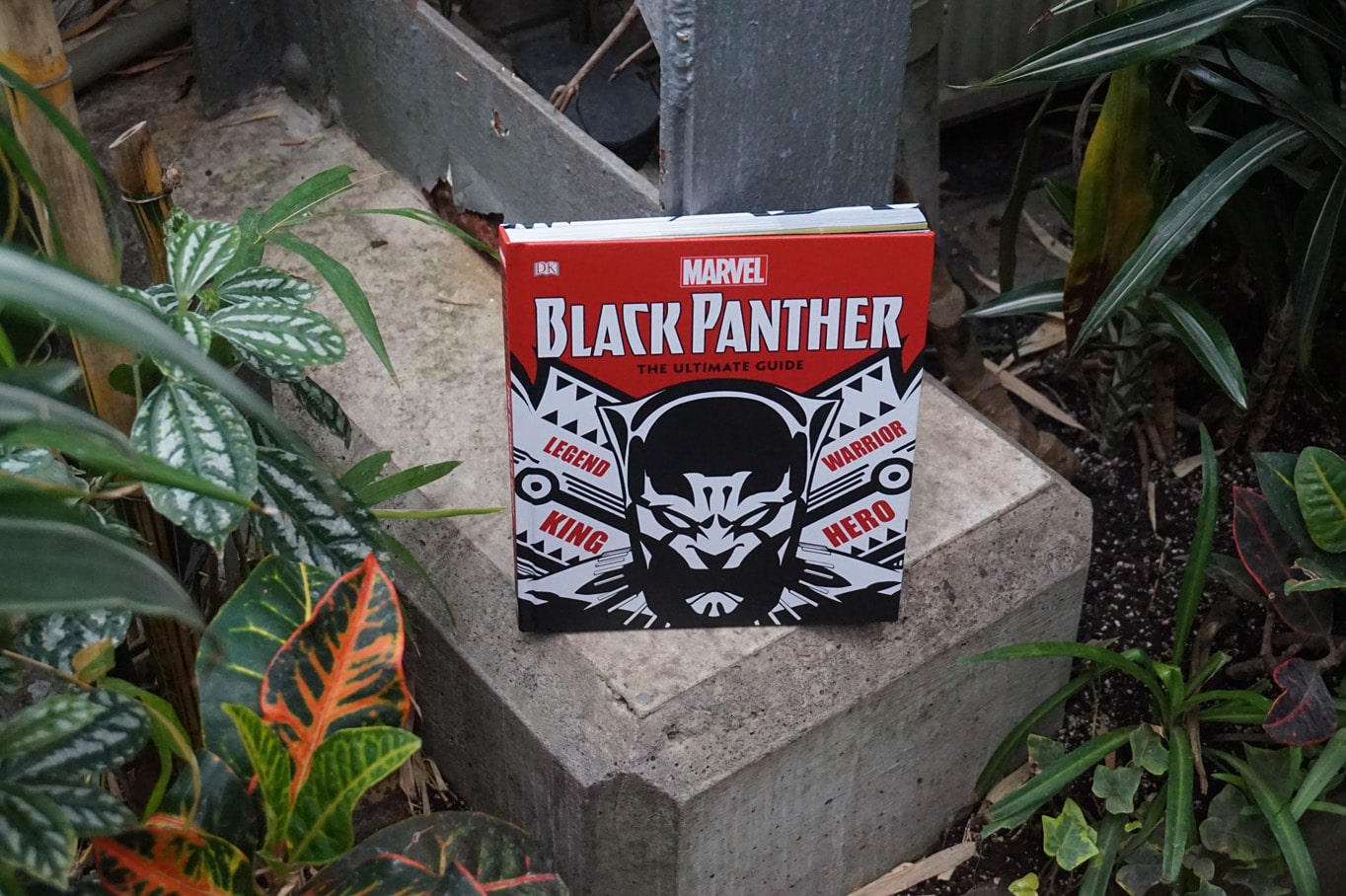 More than just a character in a comic book, Black Panther’s comic book adventures from 1966 onward offers a rich history of people with ties to their past but with a prosperous future ahead. While the Black Panther, specifically T’Challa, was the centre of these stories, it is about more than just one man. It’s about the country of Wakanda as it goes from operating untouched by outside influence where technology has advanced at a faster pace than the rest of the world but still deeply rooted and blended with its history of a confederation of 18 tribes unified by a chieftain. It’s about the women of Wakanda. These strong and powerful female Wakandans who have stepped up to rule and defend the country as equals to the men. It’s also about the impact a country and its people can have on the world when not catering to Eastern or Western interests.

In the 10 years since the Marvel Cinematic Universe launched in 2008 with the first Iron Man movie, we’ve seen a great number of heroes introduced to the public but it wasn’t until Avengers: Age of Ultron in 2015 that we got our first tease about Black Panther and Wakanda on the big screen. They didn’t make their on screen debut until 2016 in Captain America: Civil War and here we are, in 2018, eagerly awaiting the Black Panther solo movie. The film already has a record-breaking start with the highest first day pre-sales of any previous MCU movie and is expected to bring in an estimated $100-120 million opening weekend at the low end. The film will give us a greater look into the nation of Wakanda and its people. Featuring a stellar, award-winning cast, we’ll see Michael B. Jordan, Lusitania Nyong’o, Angela Bassett, Daniel Kaluuya, Danai Gurira, Forest Whitaker, and Chadwick Boseman in the titular role. This movie is almost guaranteed to be a big hit and if you haven’t picked up your tickets yet, what are you waiting for?

While you’re sitting on the edge of your seat eagerly waiting for opening day, you may want to dive into Black Panther lore. It can be a bit daunting, especially considering there have been five different volumes of comics under the Black Panther title alone, not to mention his appearances in other titles like The Ultimates and The Avengers.

Black Panther: The Ultimate Guide is the perfect visual history for those looking to familiarize themselves with the history of Black Panther at Marvel. It comes with all the details you could possibly want to know about Black Panther and features hundreds of footnotes directing you to the issues that are referenced throughout.

The book is organized by the various parts of T’Challa’s personality and covers themes, character, storylines, and specific notable issues in the history of the character. Each page provides beautiful illustration showing the development of the character from an artistic perspective. Even the cover, based on the current run of Black Panther, is gorgeous. I’ve spent hours pouring over the books fun facts, always eager to learn something new.

Before watching the film familiarize yourself with these five facts from Black Panther’s comic history:

Vibranium is a rare mineral found only in the country of Wakanda. It is the result of a giant meteor crash in prehistoric time. It is mined to enhance weapons and became highly sought after once its existence became known by the rest of the world. The radiation it gives off can cause mutations and even grant special abilities. It can also amplify and augment magic but its most famous use was in the creation of Captain America’s shield.

Because it has remained unconquered for 10,000 years, the warrior spirit of Wakanda can be see in every weapon and vehicle from their jets, to their tanks to even the Black Panther’s suit itself. It was this technology that even gave the Falcon his ability to fly.

Storm has spent most of her adult life as the leader of the X-Men through many of its iterations. She was also, though somewhat briefly, the leader of Wakanda in a sense as it’s queen. During the superhero civil war, Storm and Black Panther were wed but their story started many years earlier when Storm’s alter-ego, Ororo Munroe, then a young orphan new to her mutant ability to control the weather, saved the future king, T’Challa, from South African mercenaries. However, this romantic idyll comes to an end when Storm sides with the X-Men over the Avengers during the X-Men/Avengers war causing the people of Wakanda to lose faith in Storm as their queen and forcing an annulment. In recent issues, there seems to be a rekindling so fingers crossed that these star-crossed lovers can find their way back to each other.

Over the years, Black Panther has been a member of many different teams including the Panther Cult, the Avengers, the Defenders, the Fantastic Four, the Fantastic Force, the Secret Avengers, and the Illuminati. My personal favourite, however, is his membership in the Ultimates. Think Avengers but more diverse and on a cosmic scale. Joining the Black Panther on the Ultimates roster is Blue Marvel, Captain Marvel, Spectrum, Ms. America, and Anti-Man. The Ultimates have the responsibility to keep the entire universe safe and they have saved it on more than one occasion. Expect to see more of the Ultimates in the Marvel Cinematic Universe as they transition beyond the Avengers in Phase 4.

If there’s only one thing you know about Black Panther and Wakanda, it should be how badass the Dora Milaje are. This group of female warriors, also known as the “Adored Ones”, stem from an ancient tradition in which each of the Wakandan confederation’s 18 tribes submit a potential wife for the king. Over the years, this changed to more of a bodyguard role. The candidates are instead trained in all aspects of military accomplishment and trained as protectors and troubleshooters for the Royal Family. They are exemplary in their demonstration of duty, devotion, honour and sacrifice. They are an elite group of smart and deadly women.

I can’t wait to see how the pages of Black Panther: The Ultimate Guide translate to the big screen. We’ve already seen how great Chadwick Boseman is in the role of the Black Panther himself and it will be interesting to see the various other characters, and even Wakanda itself, brought to life. I am also looking forward to seeing the women of Black Panther brought in to the centre of the action. With the book in hand, I’m well prepared what some are calling Marvel’s greatest movie to date.