Just in time for Pride month, the Gorgeous Ladies Of Wrestling are back to body slam their way onto your screen for round two. In all of their 80’s glory, the second season of the campy Netflix show brings all the neon and glitter we’ve come to know from GLOW.

In Season 1, we saw the world of GLOW (Gorgeous Ladies of Wrestling), featuring a cast of powerful female characters, exploring their newly assigned stage personas, and crafting special moves all their own. We witnessed some of the trials and tribulations faced by the different women including the fallout from Debbie finding out her husband had been sleeping with her best friend, Ruth. 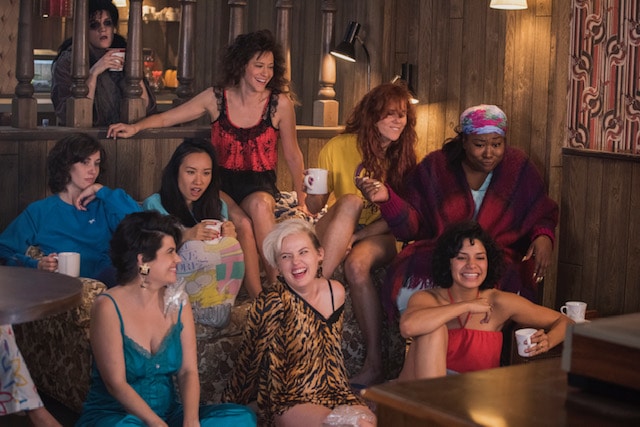 In the final scenes of the Season, just when we thought the communist tag team of the deadly Russian Zoya and Asian beauty Fortune Cookie were going to walk away with the win, Zoya turned on Fortune Cookie in an effort to claim the crown for herself. However, out of the darkness (or audience if you will), a housewife stood up to protect the championship from falling into the hands of evil. Liberty Belle, as we would learn to call her, jumped into the ring and handily defeated Zoya in true American fashion. Just when we thought everything had turned out for the better, Welfare Queen came out of nowhere to defeat Liberty Bell and take the championship win for herself.

Season 2 picks up where we left off. Now that the pilot episode is in the can and the show has been picked up by a local TV network, the ladies of GLOW, along with producers Sam and Bash, must figure out the ins and outs of bringing the show to the masses on a weekly basis. Ruth is still eager to make the show the best it can be but seems to keep running into a 1-step-forward-2-steps-back situation in her relationship with Debbie. Her enthusiasm is further diminished by Sam’s anger towards her for going behind his back during the filming of the show’s pilot. Debbie is also trying to get Sam and Bash to take her seriously as the third Producer on the show while also battling her still lingering feelings of resentment from the breakdown of her marriage. Ruth and Debbie aren’t the only ones struggling to balance their lives as we see the rest of the cast, including the recently departed Cherry, as they strive to be the best they can be both inside and outside of the wrestling ring. 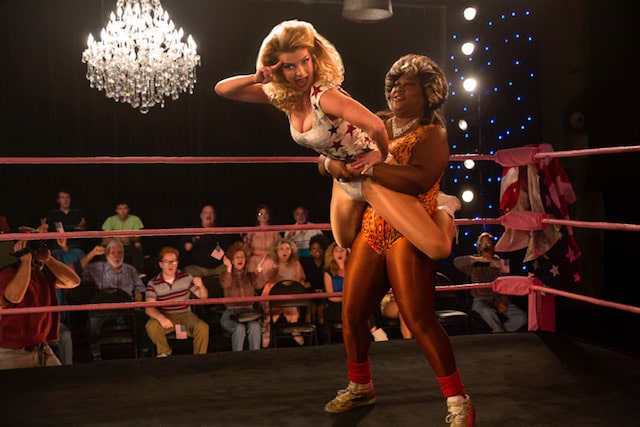 In GLOW’s second season, you’ll feel the same familiar charm and earnestness we got from Season 1. The cast is all here but they’ve added Yolanda, a feisty latino lesbian, who serves as an ally to Ruth. The will they/won’t they friendship between Ruth and Debbie gets slightly tedious at times but only slightly and does manage to provide a few surprisingly touching moments. My favourite take away from season two is that the writers managed to highlight and address one of the issues we’re still seeing today: the inappropriate treatment of women by men in positions of power. The way the show examines this issue shows that, while the #MeToo movement may be new, the way women have been treated goes back to the dawn of time. Reactions by the characters to this turn out to be surprising but it’s good to see that women in the 80s were not afraid to stand up for themselves.

All 10 episodes of GLOW Season 2 are released globally on Netlfix June 29th .