Religion as the thematic topic of entertainment has been around since well, forever. The want to discuss, analyze and bemoan the intricacies of God and faith are nothing new, but when done well can be captivating and startling. Every entertainment medium has vehicles for exploring religious themes and live theatre is no different. The latest to wade into the conversation is Diane Flacks’ Unholy, a two-hour emotional slugfest that asks the question: Should women abandon religion?

It’s a pointed question that begs for a one word answer on either side of the equation, if only to dissect the shades of grey lurking just beneath the surface. Written by Flacks and directed by Kelly Thornton, Unholy is an example of wild creativity bursting at the seams with ideas and the tight narrative structure necessary to funnel it’s requisite cousin into a cohesive play deserving of praise.

“I wrote the play because I’ve circled topics of religious oppression and the randomness of fate in all my work for years. The unfairness and brutality of religion, the question of god. And I wanted to tackle it head on after my son spent his first year in Sick Kids hospital and the suffering that he experienced and that we witnessed turned me into an atheist,” Flacks said in an interview. “I no longer could sit on the flabby agnostic fence. But I met people who were of faith and I respected them. So I wanted to know more,” She said. 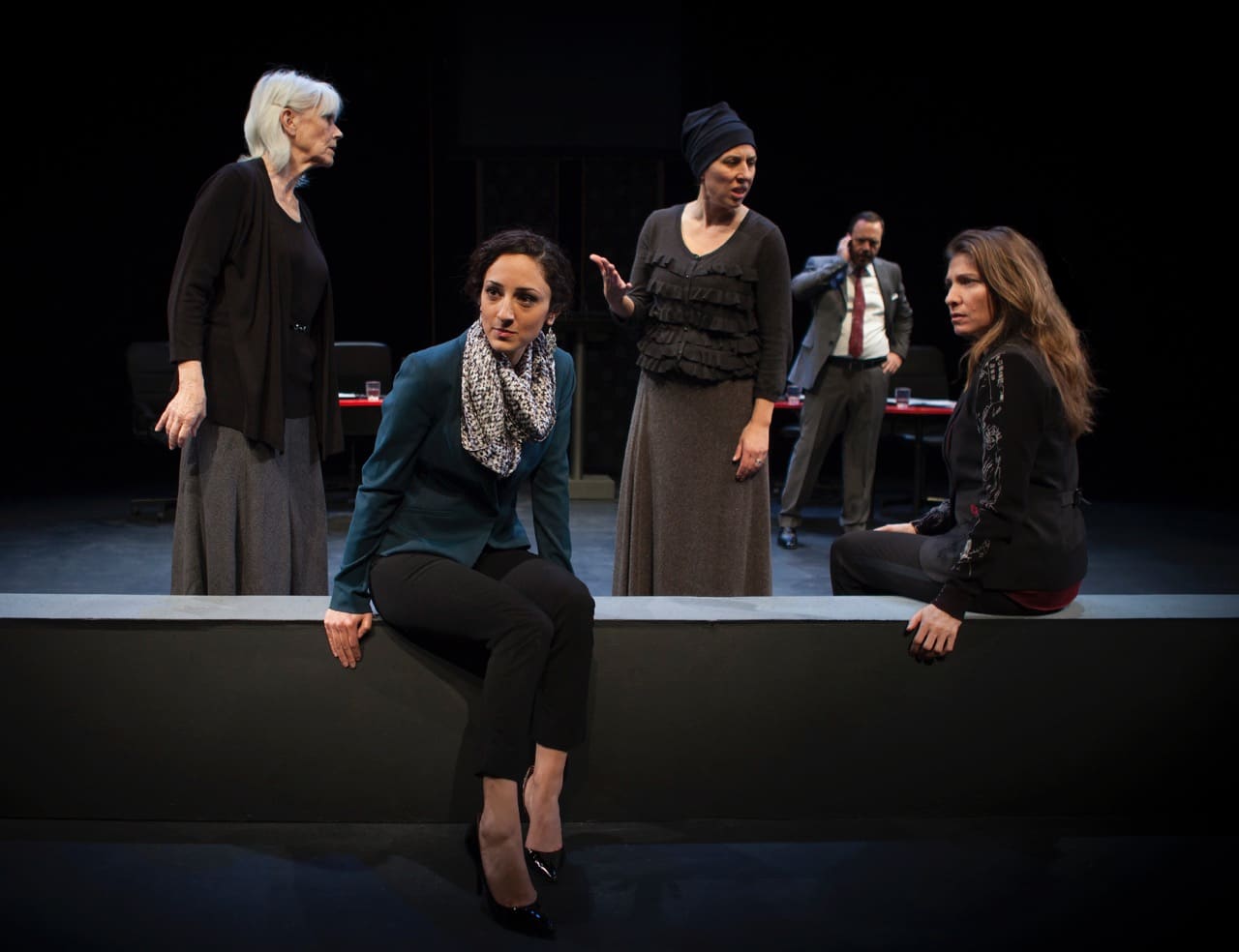 The setup is fairly simple, with the play opening on four women sitting down for a televised Youtube debate, the aforementioned “Should women abandon religion?” as the primer. From there Flacks—who also stars as one of the four leads—delves into the backgrounds of each of the characters, providing a stimulating and engrossing look at what drives their attachment (or in some cases abandonment) to religion.

As a theatre nerd, I had heard plenty of great things about Unholy and specifically Flacks. Part of the fervor was centered on her creative ingenuity in updating Unholy to match the societal times we live in. Flacks does this with the new run of shows specifically including direct references to the Weinstein scandal amongst other recent pop culture nods, allowing Unholy to feel fresh and relevant.

While the main focus of the play is weighted on the initial question of Religion, I found it interesting that Unholy didn’t just rely on grandiose themes of faith to hold the audience’s attention. For many plays that deal with these giant and millennia old ideas, it can be easy to get lost in the point the playwright is trying to make. Flacks deftly sidesteps any of this by both being very specific with her subject matter but also taking the time to inject thoughtful humour, pathos and complicated romance that elevates Unholy above its initial offering.

“I am fortunate to have great and insightful actors and director and I ask them for their opinions on a new line and how they feel about it, and if they feel they need it,” Flacks said. “I really love cutting my own writing, so if something I add isn’t necessary, I kill it. Ultimately, I make the decision about a new line once we try it and it’s usually pretty obvious if it’s appropriate or not,” she said.

One of the things that aids the narrative direction of Unholy is it’s fantastic use of staging and lighting. The set is minimal, with a modern debate style setup dominating most of the proceedings. But when characters are highlighted individually and their backstories revealed, lights are changed and the stage is awash in darkness, with a few different light setups used to acknowledge the change in time and place.

Praise should also be given to the other actresses involved who were given the task of portraying multiple characters throughout the play. The talent and skill need to make each character believable and true is gargantuan and Barbara Gordon, Bahareh Yaraghi, Niki Landau and Kevin Bundy did a tremendous job.

Another testament to the writing of Flacks, is in the ways that the characters develop over time. At the beginning of Unholy I found myself relating to certain viewpoints and those who espouse them, while disagreeing with others. But as the show went on, I found myself if still disagreeing with certain characters, at least understanding their motivations and perspectives. And by the end of the show my opinions had flipped in a way that I found surprising to say the least. Flacks has the ability to—even in the most vitriolic of moments—humanize her characters in a way I found refreshing and vital to my enjoyment of the story.

“I was interested in what means more to us: our ideas or our hearts. I also felt that the setting of a public debate was fascinating and I was curious about the way that women disagree – both publicly and privately. The behind-the-scenes of the smiling and slick tv persona was also of interest to me,” Flacks said. “And then, love and sex came into it. And I realized that they are the most holy of human attributes and maybe are what we should worship,” she said.

Overall Unholy is a play worth the conversation after it’s over, which isn’t always the case. Whether or not you’re a fan of theatre, Unholy is a play right in the middle of our cultural milieu, leading the discussion on important topics that not all entertainment mediums have broached effectively in 2017.

Unholy runs from November 25 to December 10 at the Buddies in bad Times Theatre.