The plant-based food phenomenon has gone mainstream and if you’re considering a meatless diet but aren’t sure where to start beyond the ubiquitous (and boring) salad and steamed broccoli, I have just the ticket.

Ayurveda is the world’s oldest heath system, originating in India over 5,000 years ago. A sister science of yoga, it focuses on balancing the mind and body for good health. It teaches that food is medicine, with the power to heal, but here’s where it gets really interesting. Instead of a one-size-fits-all regimen, eating Ayurveda is bespoke because the best foods for me might not be healing for you.

Eat Feel Fresh opens with everything you need to know to land on your Dosha. And then tells you what you should eat for maximum health and wellness. I’m Vata, which is sorta weird since I’m a Gemini, also an air sign.

Wait. There’s more. Vata’s are sometimes stupid hungry and other times can’t be bothered. That’s me. A Vata has no idea what’s for dinner till they go into the kitchen and peek into the fridge. And they don’t follow recipes – they just make it up as they go along. Yup, all me. Downside: they burn food more often that they like to admit. Uh huh.

Once you’ve figured out your Dosha, Eat Feel Fresh helps you fill your spice rack and stock your pantry, and then offers time and prep saving tips that combine the ancient tenets with modern realities.

What follows: tons of lip-smacking recipes for breakfast, lunch and dinner plus snacks, sides and – yay! – desserts.

With winter, sadly, on the way, I tried a bunch of the soup and curry recipes. OK, I tinkered with them a bit being Vata and all, but they were easy to make and mighty tasty. My faves? Moroccan, Lentil, Chickpea and Kale Soup – bowl-licking good – and One-Pot Curry served with Cauliflower Rice and Grain-Free Naan. My local Indian eatery will be seeing a lot less of me. 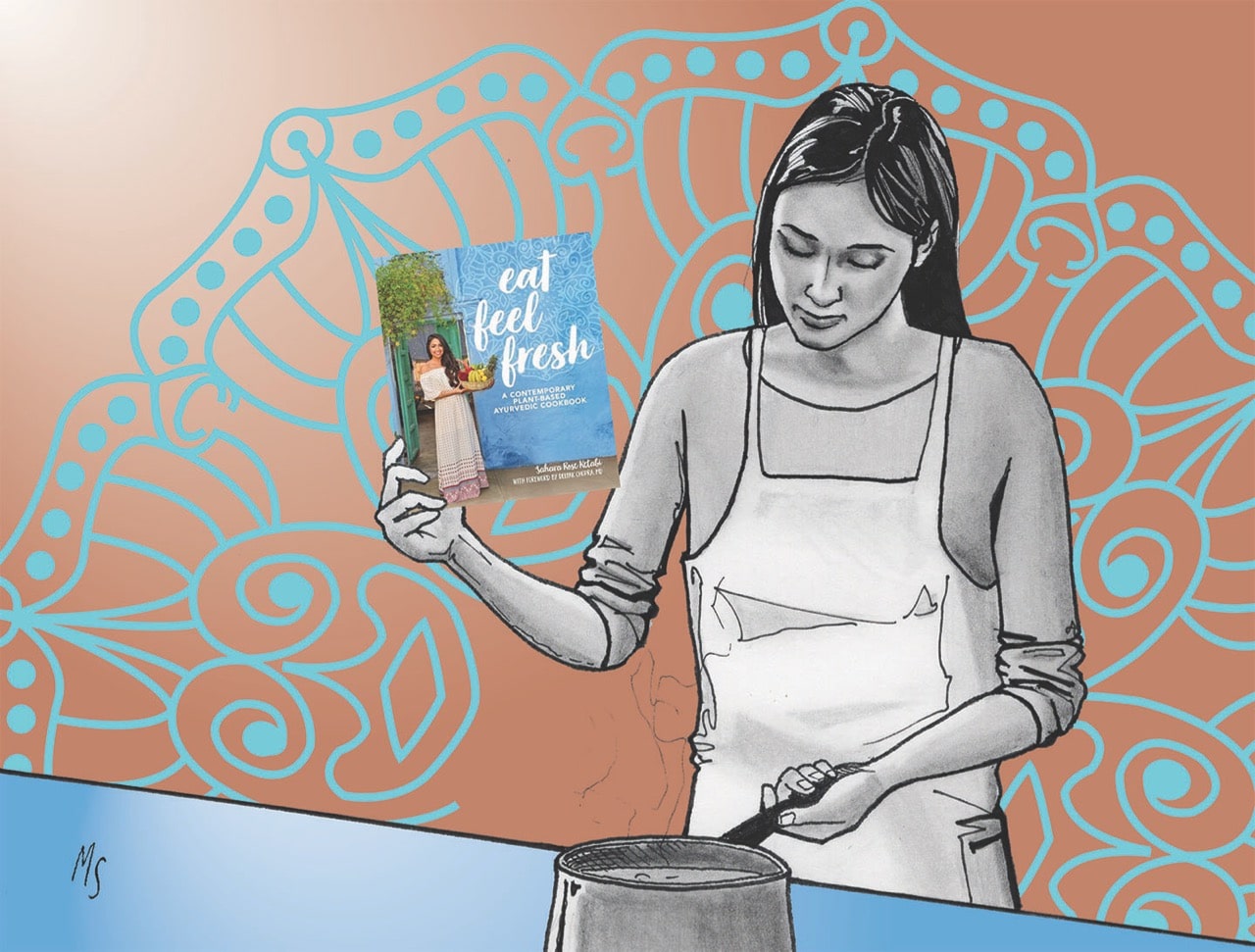 The LEGO brick was patented on January 28, 1958. But its provenance is a small carpenter’s shop in Billund, Denmark decades earlier. Ole Kirk Kristiansen, a Master carpenter, was building houses and furniture. In 1932, with the Great Depression nipping at the shop’s heels, Kristiansen turned his talent to creating children’s toys – beautifully crafted and painted yo-yos, wooden blocks, pull-along animals and all sorts of vehicles.

Fast forward to 1947. Kristiansen risked his business and bought a plastic injection-moulding machine. In 1955, the LEGO System in Play launched and the rest is well . . . not just history but also game changing.

How do I know this? The LEGO Book: New Edition (DK Publishing, 2018). Boasting an exclusive 60th anniversary LEGO brick embedded in its front cover, The LEGO Book is a visually scrumptious behind-the-scenes tour from the brick’s beginning’s to LEGO’s much-loved toys, video games and movies including LEGO Star Wars, The LEGO NINJAGO MOVIE, and LEGO Dimensions. Not to mention ground breaking fan collaboration opportunities like LEGO Ideas, a website that invites LEGO fans to bring their LEGO creations to life. Some lucky LEGO-ites have realized their ultimate dream and seen their design transformed into a LEGO set. With royalties paid.

What’s way awesome about LEGO – the name is a contraction of leg godt, Danish for play well – is that while the company has evolved it has never messed with the brick or strayed from its founder’s credo: Only the best is good enough, rephrased by Kristiansen’s grandson Kjeld Kirk Kristiansen in 1996 as, “Children mean everything to us. Children and their development. And this must pervade everything we do.”

Of course, when it comes to LEGO “children” is open to interpretation. Take my friend Jeff Smith, a 40-something father of two, whose daughters are way less obsessed with LEGO than he is. “I grew up playing with LEGO, “ says Jeff, “I remember all of the fun I had building and creating my designs. I rediscovered my interest in the product 10 years ago with the introduction of the Architecture series and I’m glad to still be a fan.”

The LEGO Book: New Edition is the best ever holiday gift for no-age-limit LEGO fans. You will be golden. Trust me. 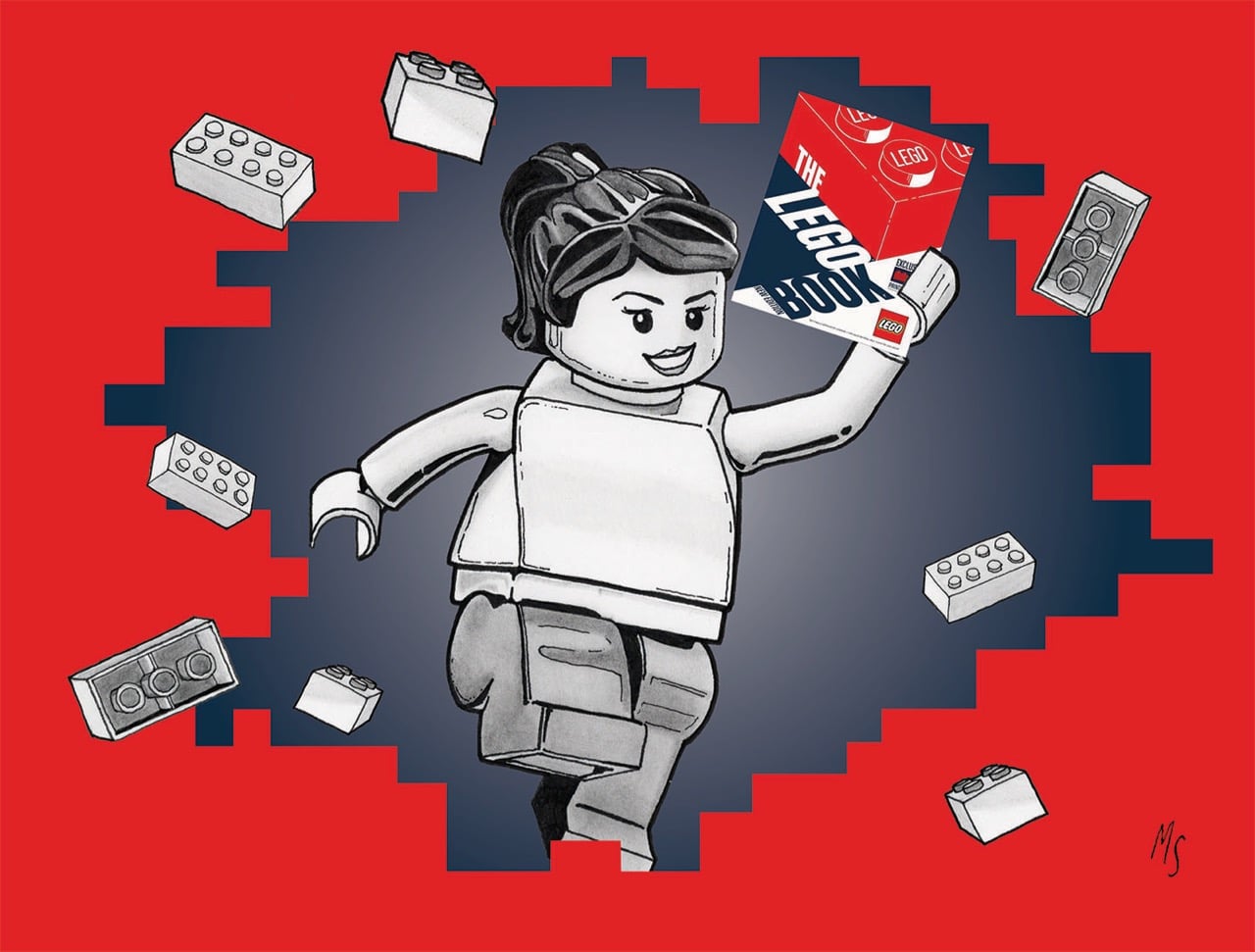 Kate Morton, New York Times best-selling author – The Lake House was a People magazine Best Books of the Fall 2015 – crafts a particular kind of story: there is an English country house, there is a crime, there are secrets and the tale crosses generations.

But that said, the formula works – and her latest – The Clockmaker’s Daughter is true to form, a lush, captivating tale you simply can’t put down.

A stormy night. A gunshot. Fade to black.

Summer 2017: Archivist Elodie Winslow discovers a satchel, a photo of an arresting young woman in Victorian dress and a sketch of a twin-gabled country house on the bend of a river. Elodie thinks she recognizes the house – the details in the sketch are the same as the details of a house central to a story her mom told her night after night when she was little.

Elodie’s search to find the house and to name the mysterious woman in the photo intersects with stories about, and by, all the people who have a tie to Birchwood Manor since 1862, including a spirit who still lives there.

The Clockmaker’s Daughter is a complicated tale, moving back and forth among narrators and points in time. At the hands of a less capable storyteller, it would have been a big complicated mess.

But Morton is a gifted writer and while The Clockmaker’s Daughter is not high lit, it is a solid page-turner – the perfect rainy day Sunday read. 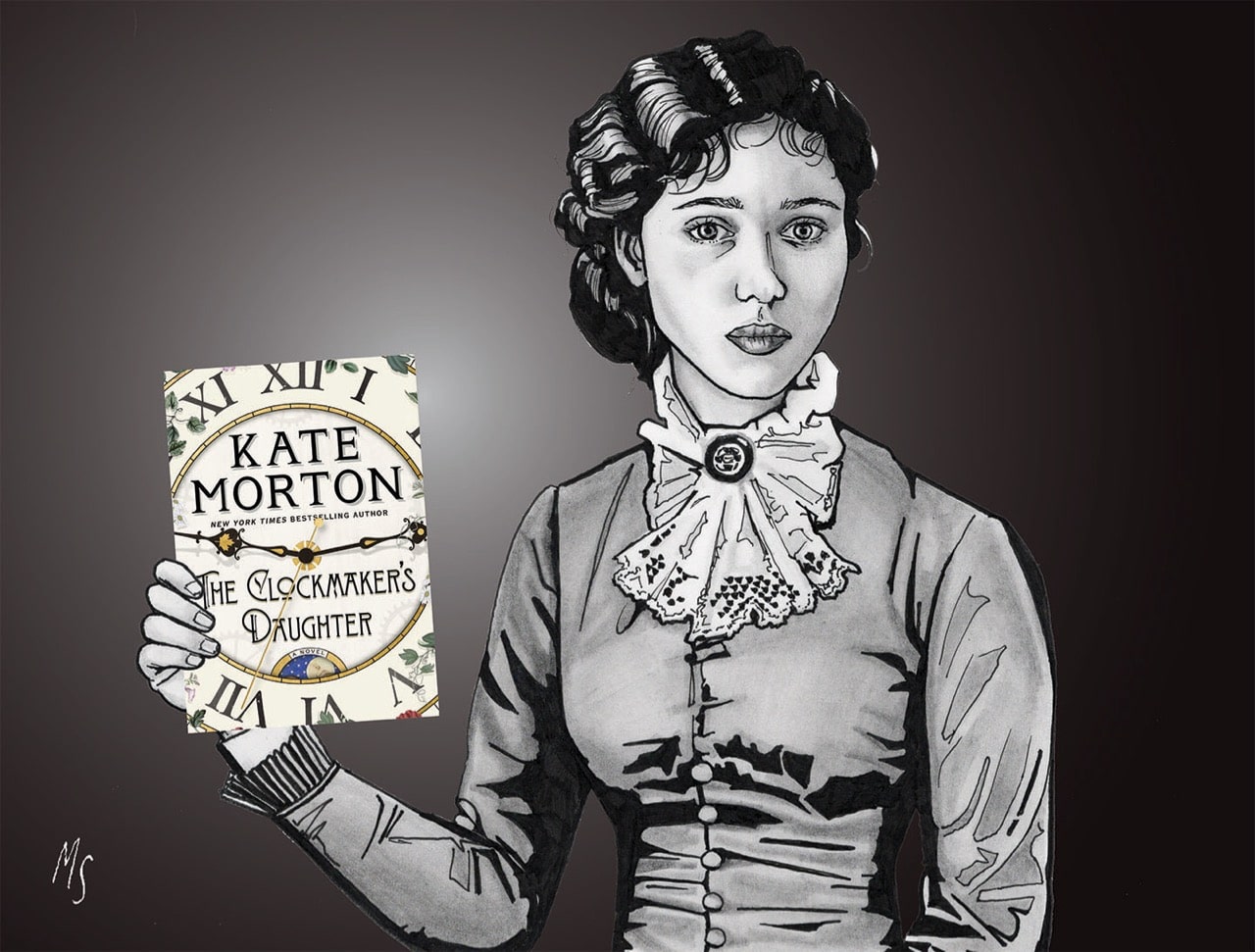 Award-winning author Claire Fuller’s third novel is also set in England, at Lyntons, an old, long-abandoned country estate, but the year this time is 1969.

When the story opens, Frances Jellico, its narrator, is dying in a palliative care bed in some unnamed facility. Her only visitor: a “vicar” who doesn’t seem to be an actual vicar but who does seem to be way keen on getting her to confess to some sort of bad deed. Slipping in and out of reality, Frances tells us what happened.

An American has bought the mansion, and Frances, a kinda lumpy and socially inept 40-year-old virgin, has been hired to catalogue its garden architecture. When she arrives at Lyntons, she is surprised to discover two more people staying there – Peter, who has been hired to catalogue the architectural details inside the house, and Cara, a glamorous Italian-speaking woman she assumes is Peter’s wife.

Peter and Cara adopt Frances – she can’t figure out for the life of her why, they being so awesome and all – and for the first time in her life, Frances feels inside the room, instead of outside peering in.

As the story unfolds, we learn that Peter has a wife who is not Cara, that Cara is his Irish lover, and that the two of them are bound by some sort of traumatic experience they don’t want to talk about.

That said, Cara does a lot of talking and her stories seem far-fetched – she had a child, she tells Frances, but her son was a virgin birth. He isn’t around now because “I let him go”.

At first, Frances is flattered, but as she slowly comes to realize that Cara isn’t quite right, that Peter is an enabler, and that their relationship is toxic, the friendship begins to crumble, like Lyntons itself.

Bitter Orange reminds me of The Great Gatsby, a seemingly benign but in fact sinister story about what happens when you try to rewrite your narrative and outrun your past. 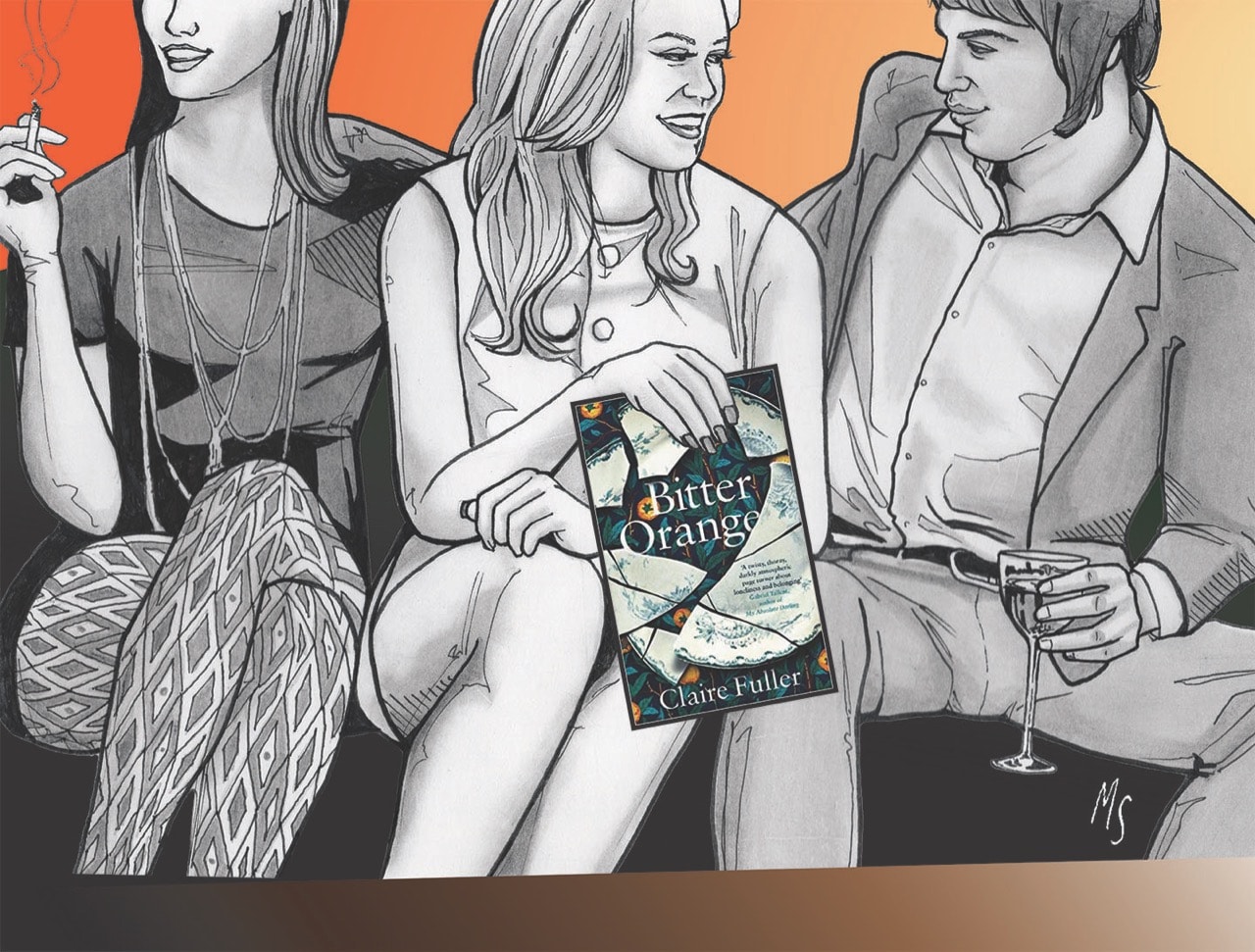 Chef Matt Basile and his partner Kyla Zanardi, a food photographer and associate producer of Rebel Without a Kitchen, know a thing or two about brunch – their restaurant Lisa Marie was voted a Top 10 brunch Spot in Canada by Open Table.

And while the power duo would love to welcome you to Lisa Marie for your weekend ritual, they happily share more than 70 I-want-to-eat-right-now recipes to enjoy at home via their newest cookbook: Brunch Life: Comfort Classics and More for the Best Meal of the Day.

Basile and Zanardi recognize that brunch is a cultural event, and that favourite dishes vary across North America, so they have organized the book into nine sections that include brunch fare from San Francisco, New York, Nashville, Seattle, Vancouver and of course, Toronto. 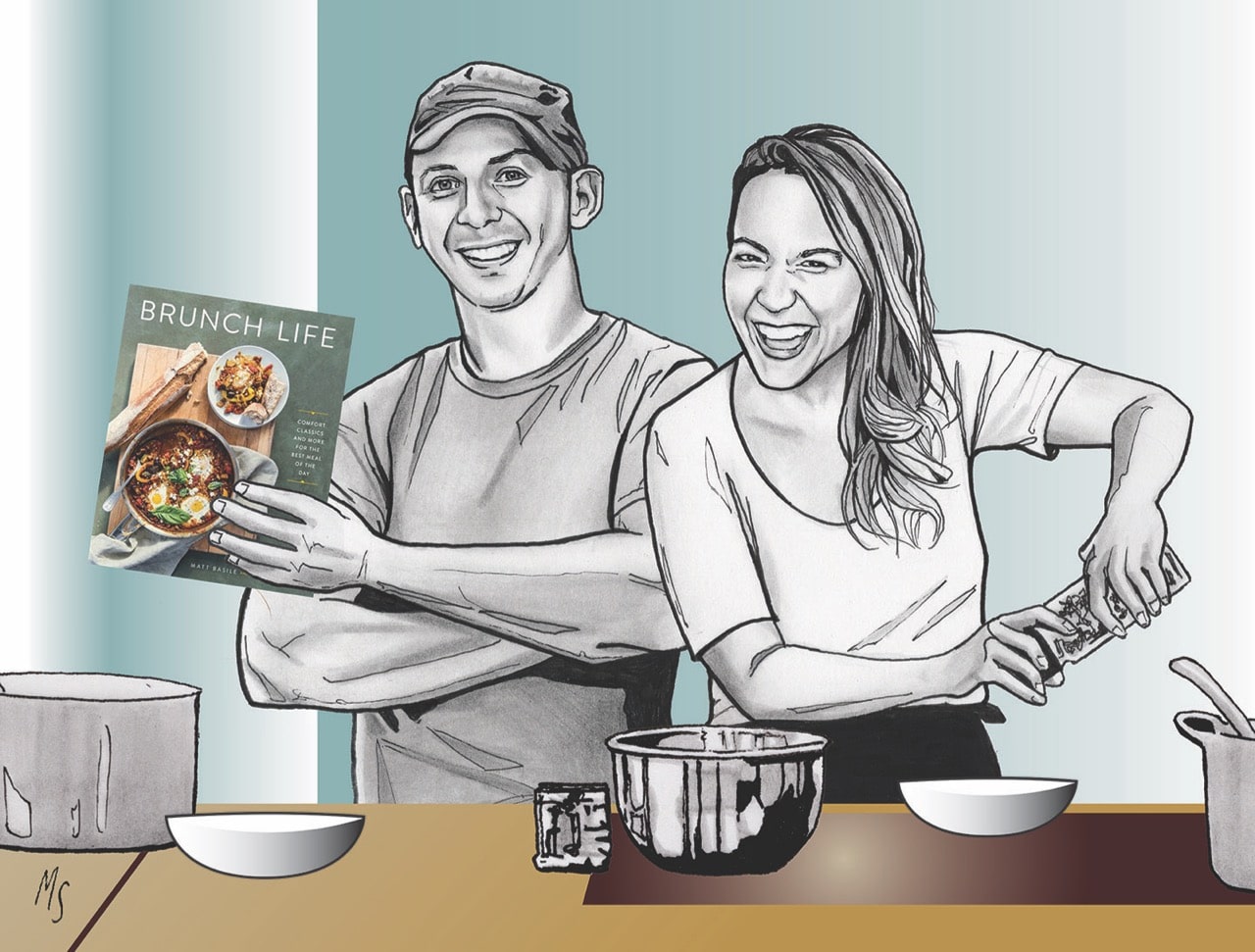