The Mythology Book (DK Publishing, 2018), takes us on a ‘round-the-world tour of more than 80 myths, many of which formed the foundations of great religions and inspired writers from Homer to James Joyce.

I love DK’s Big Ideas book series because they deliver what they promise: to make complicated stuff compelling.The Mythology Book is no exception. Divided into seven major sections, it looks at myths from every continent and significant period in history, complete with beautiful images and illustrations, easy-to-understand fact boxes, and engaging call out quotes.

Myths aren’t just old-timey stories. They speak to our need to understand our world – where we came from, how we got here and how we make sense of all the violent and scary stuff around us. That said, myths often are violent and scary all by themselves – not sure what that says about humankind but there you are.

Take Kronos, King of the Titans. He castrates and kills his cruel father. Then be becomes a cruel father his own self. Worried about a palace coup, he kills and eats his kids. Tricked by Rhea, his sister and wife (I know) he misses Zeus, King of the Olympians, who comes back and murders him. Messed up, right?

We don’t know as much about Northern European myths as we do about the ancient Greek and Roman ones. People couldn’t read and write until the early Middle Ages so myths were passed down orally from one generation to the next. When people did learn to read and write, and thought that writing down the stories would be a good idea, the Church made recording the old myths a Big Sin, so most of them simply disappeared.

And the stories that did survive, like the one about King Arthur, got reimagined. The earliest legends about King Arthur, for example, say he was a heroic warlord who defended the Celtic Britons against the Germanic Anglo-Saxons who invaded Britain when the Romans left in 410 CE. But after the Normans invaded in 1066, French and English writers decided to make him sexier, depicting him as the idealized King of England. Poetic license, I guess.

The Mythology Book makes fascinating reading, unravelling the meanings behind the stories and offering the sort of Ah Ha tidbits you’ll dine out on. Trust me. 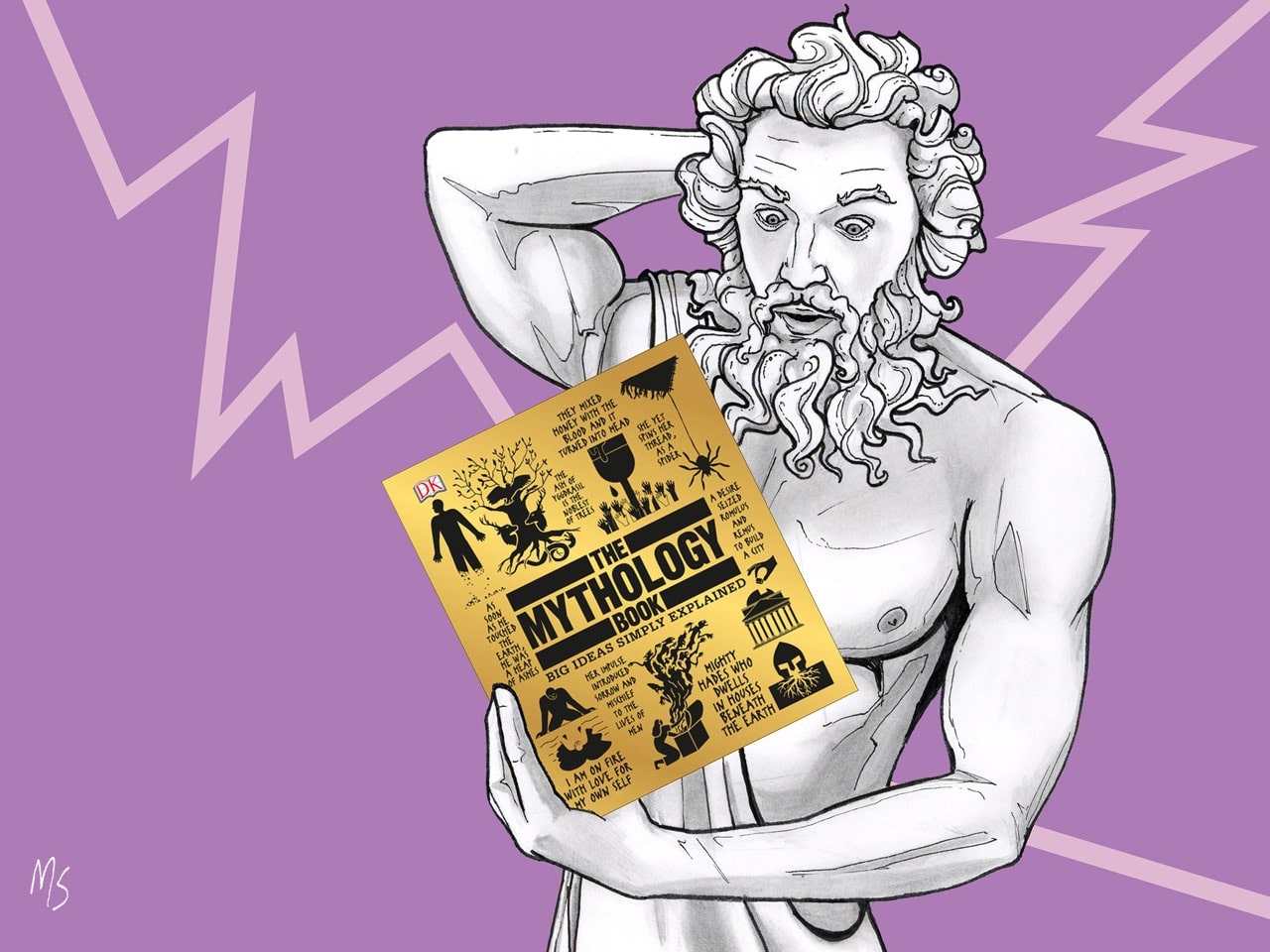 The Story of Food

The Story of Food: An Illustrated History of Everything We Eat (DK Publishing, 2018) is a fascinating soup-to-nuts celebration of our relationship with food since we arrived on the planet.

Like every other animal, our earliest ancestors ate whatever the heck they could find. Then they figured out that some stuff was tasty, some stuff was not and some stuff could kill them. Moving on, they became hunter/gathers, and then engaged in organized agriculture and the rest is. . you know. . history.

But food isn’t just body fuel, and The Story of Food, lavishly illustrated with gob-smacking paintings, photos, artifacts and vintage adverts, explores the everyday food we enjoy in the context of culture, symbolism and tradition.

Like: Celibate priests in ancient Egypt couldn’t eat onions because they were considered to be an aphrodisiac.

China grows around 1 million tons of potatoes a year – more than any other country – but exports less than one percent of the crop. And you thought that the staple carb was rice, didn’t you?

Covering all food types including nuts and grains, fruit and vegetables, meat and fish and herbs and spices, with shout outs to influential international cuisines and the local foods that built them, The Story of Food is a glorious culinary reference book for foodies, gourmet cooks and everyone else – like me – who is fascinated by the the relationship we have with what we put in our yaws.

I’m marrying it with an Instant Pot as my go-to wedding gift this summer. 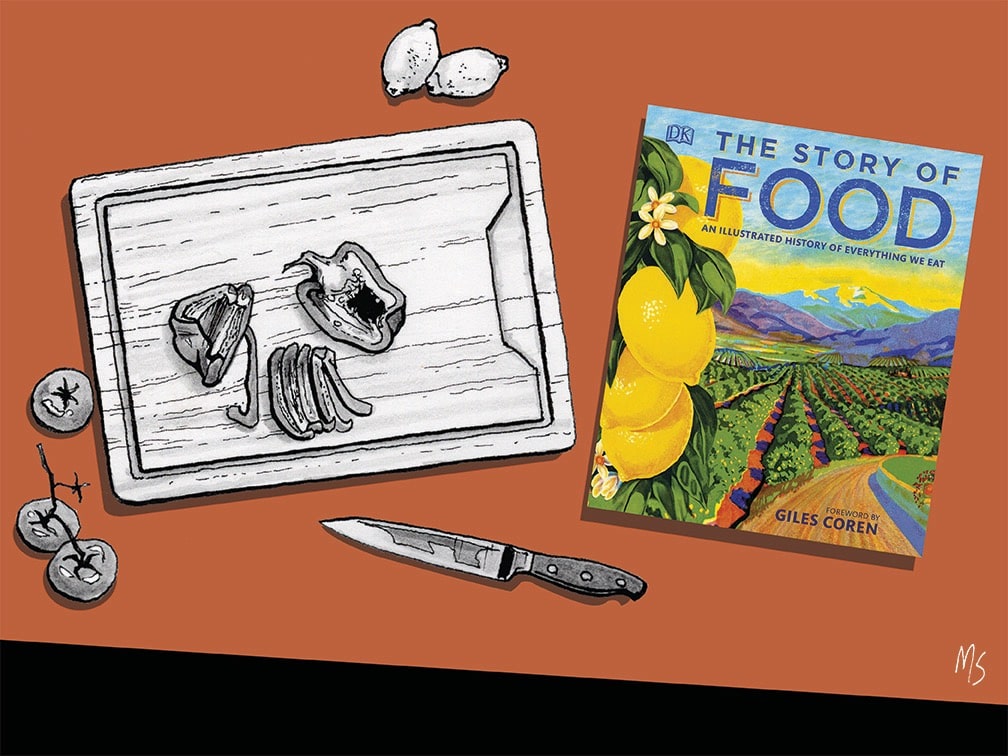 Calypso, David Sedaris’ latest collection of essays – 21 in all – pretty much revolve around his wacky family – his Trump-voting, 92-year-old dad, three unusual sisters (a fourth committed suicide) and his younger brother, the most normal of the bunch – and his regretful slide into middle age with the wit, charm and style you expect from a writer who is laugh-out-loud funny.

Sedaris is a perceptive student of human nature. He observes life, I think, more than he participates in it, and frankly that’s what makes his essays so entertaining – he may be writing about people you don’t know but trust me, you will see a bit of yourself or someone you do know in every story.

Realizing that he has more past than future, Sedaris buys a beach house – he calls it Sea Section – in North Carolina as a perfect spot to host the family gatherings he wants before the lot of them go on to their just rewards, and his family becomes fodder for Sedaris’ nothing-is-sacred sense of humour.

Sedaris doesn’t let himself or his partner Hugh off the hook either. Hugh, apparently, usually believes that when Sedaris is sick or injured, it’s all in his mind or clearly his own fault.

“That was the case when I fell off a ladder. It was Christmas Day and as I lay on the floor, unable to move or speak, he stood over me shouting, ‘Why are you wearing those pants? You look like an idiot! And with that shirt I don’t even know who you are anymore!”

Sedaris’ observations are never mean spirited – his uncanny ability to capture both the absurd and the poignant with wry wit and gentle humanity make this a book you’ll read more than once. 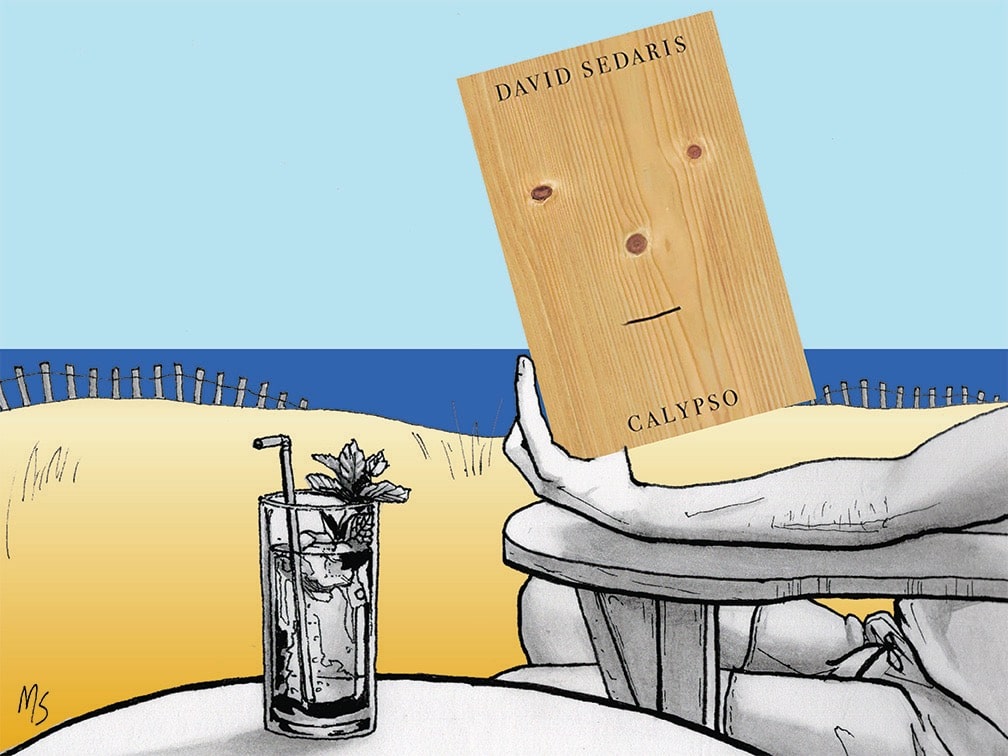 Tin Man, acclaimed author Sarah Winman’s third novel, is quite simply, one of the most achingly beautiful stories I have read in a long time. OK, before you think that’s kinda hyperbolic, let me tell you why.

Forty-six-year old Ellis, a widower, wanted to be an artist. He is, sort of. Ellis is a tin man, a body shop guy who can get rid of the dent in your Porsche 911 you got trying to park at Wal-Mart by carefully applying pressure so you won’t even be able to feel where it was.

His job doesn’t define him though. What does: his relationship with Michael, the boy he met when he was 12, and Annie, who became his wife, and completed the triangle. Now, he’s the only one left.

Ellis and Michael came of age together as besties. On a holiday in France, they become shy lovers; back in England, though, their relationship returns to what it had been: intense but not physical.

Then Annie and Michael die. Ellis is left all alone and as he grapples with his pain, he begins to craft a future that may well be more authentic than his past.

Tin Man is a layered story of love, loss and loneliness. It’s quiet and intense and exquisitely written . . . OK I’m gushing now. Just read it and tell me I’m wrong. 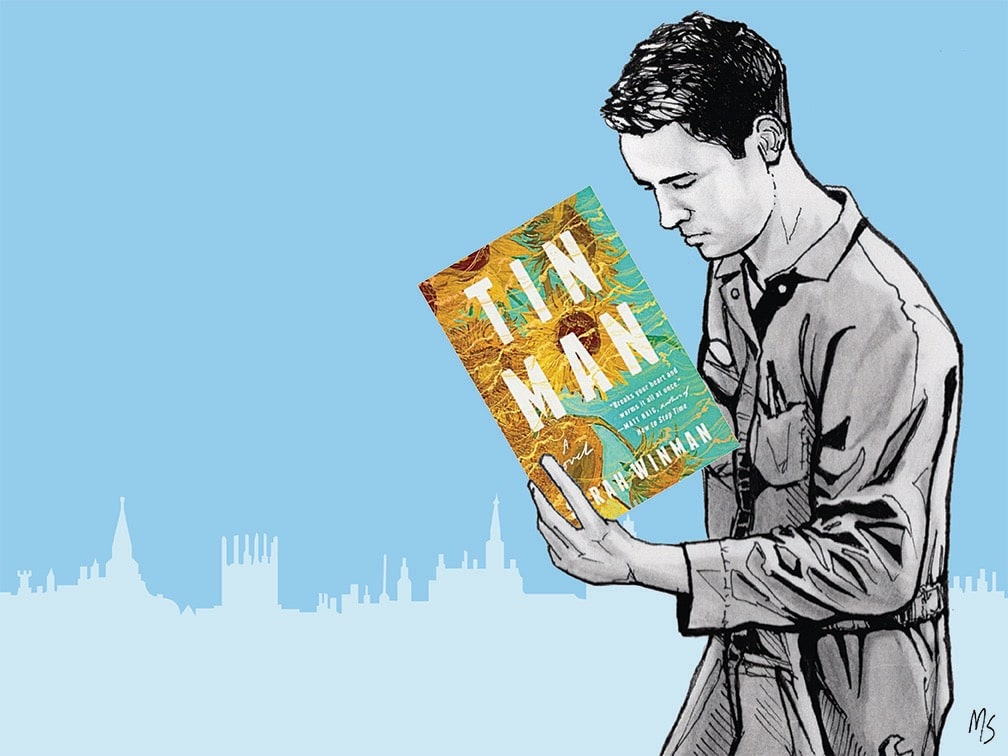 The Map of Salt and Stars

Twelve-year-old Nour was born and raised in New York, the daughter of Syrian immigrants. Mom is a cartographer and dad designs bridges. When her dad dies of cancer in 2011, Nour, her mom and her older sisters Huda and Zahra move to Homs to join family. Shortly after they arrive, Homs was under siege.

As the family flees toward some sort of safety, a frightened and confused Nour loses herself in a story her dad used to tell her about 16-year-old Rawiya who left her home in Ceuta – a Spanish city in North Africa where Nour’s parents once lived – disguised as a boy. She becomes an apprentice to al-Idrisi, a 12th-century mapmaker, as he travels around charting trade routes, the same route Nour and her family take on their flight to freedom.

Rawiya’s tale is full of adventures – some of them near misses – but it has a happy-ever-after ending.

Not so for Nour. Also disguised as a boy to keep her safe, Nour and her family endure cold, hunger and the horrors of being refugees. Huda is raped by a gang of boys and then is seriously injured by a bomb.

But that said, the stories share a coming-of-age subtext: both fatherless girls are searching for who they are as they grow into womanhood, and how they will define “home” in a world beyond their experience.

The Map of Salt and Stars is a compelling story that often feels more fact than fiction, at times intense and painful to read. I could not put it down. 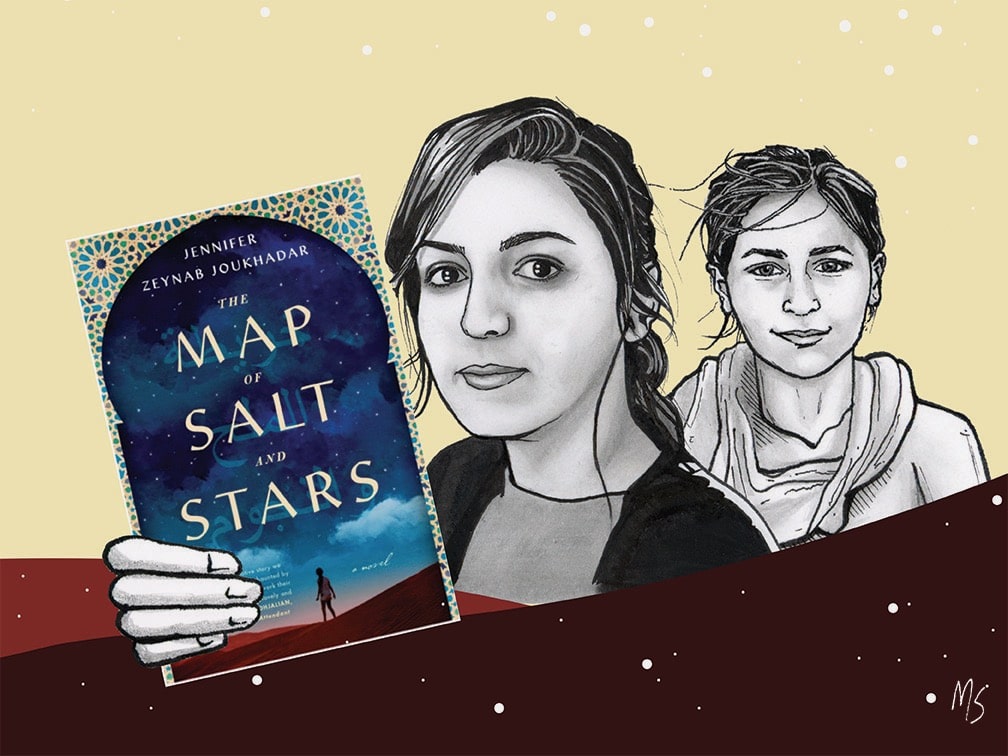