OK, y’all know by now that I’m a fan of DK’s Big Ideas books, the series that offers the A to Z backstory on a really BIG topic.

How Psychology Works: The Facts Visually Explained (DK Publishing 2018), part of the How Things Work series which brings a big topic into focus for every day practical purposes, demystifies the human mind using the same sort of jargon-free definitions, big-impact illustrations, infographics, charts, graphs and quotes to help make everyday sense of why we do what we do, in the here and now.

With an introduction that explains what psychology is in language people without Dr. in front of their name can understand, How Psychology Works breaks down into three chapters: Psychological Disorders – 20% of CEOs are psychopaths – yikes!; Healing Therapies – antidepressant use increased nearly 65% from 1999 to 2014; and Psychology in the Real World – 48% of men fall in love at first sight compared to 28% of women.

The Psychology in the Real World is especially intriguing. Take the section on The Science of Love. You might think falling in love is just . . . well . . . serendipity. Wrong. Psychologists have carried out tons of scientific studies, although they haven’t all come to the same conclusion.

That cute guy you run into in your apartment laundry room? Robert Zajonc put forward a theory in the 60s he called Mere Exposure Effect, suggesting that one of the main reasons one person becomes attracted to anther is simply because of close proximity. Boring.

In the 80s, Caryl Rusbult studied a bunch of college students and decided that committed relationships were based on a mathematical equation: Commitment = Investment + (Rewards – Costs) – Attractive Alternatives. Calculating.

More recently, anthropologist Helen Fisher and her colleagues identified three stages of falling in love – lust, attraction and attachment – each stage driven by chemicals that affect our emotions and behaviour. Testosterone and estrogen drive lust (but you knew that already); adrenaline, dopamine and serotonin fuel attraction; and oxytocin and vasopressin, released after sex, seal the deal. Makes sense to me.

But that’s not all. The sense of smell coupled with chemical reactions in your brain start a chain reaction – it takes between 90 seconds to four minutes to decide whether or not you’re attracted to the woman at the bar who just sent over a Call Me in the Morning cocktail.

How Psychology Works is a fascinating read if you’re curious about why you – and the rest of the world – do what you do. And how you can change things around. 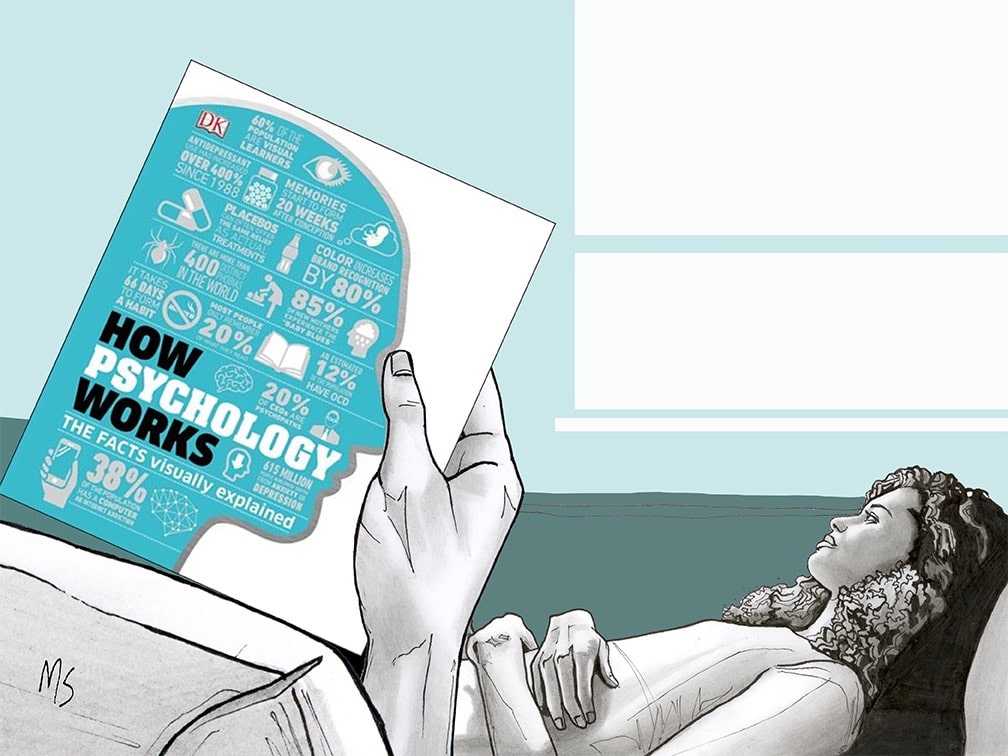 Ayurveda is trending right now. Never mind that the practice of mind-body balance is millennia old, if the purveyors of high-end skincare are talking Ayurveda – and they are – you know it’s top-of-mind for trend-setting hipsters. And that’s you, right?

Practical Ayurveda : Find Out Who You Are and What You Need to Bring Balance to Your Life (DK Publishing 2018), is your personal guide to all things Ayurveda, including how to increase your prana – life energy – through personalized diet, herbs, oils and minerals, plus practicing yoga and meditation.

Practised in India since forever, Ayurveda means life-knowledge; it’s a personalized approach to health and wellbeing that starts with your mind-body type.

There are three doshas, energies that make up the mind and body: Vata, Pitta and Kapha. We all have some of each dosha but a self-assessment at the beginning of the book identifies your primary dosha.

I’m Vata – I’m sensitive, creative, change embracing and perceptive. Body wise, I’m slender, lean, a light sleeper and susceptible to the cold. All of which are true. Crazy, right?

Practical Ayurveda then offers diet, yoga and mediation designed specifically for my dosha, my roadmap to realizing my full potential in body, mind and spirit.

Take the recipe section, for example – I always go straight for the buffet, don’t I? Simple breakfast, lunch and dinner recipes vary the ingredients to reflect the needs of each dosha. Stir-Fried Vegetables with Sesame Noodles include one list of vegetable for Vatas – zucchini, Swish chard and carrots – and a different list for each of the other two doshas.

The Positive Thinking and Meditation chapter covers raja yoga, which uses positive thinking and meditation to calm you down and help you focus on achieving a state of balance and peace – I’ve been carving out a few minutes in the middle of the day to practice the Separation From the Mind exercise (no mean feat for me) and it helps when I’m in the middle of chaotic deadlines. Seriously.

Written by leading teachers from the renowned Sivananda Yoga Vedanta Center – there’s one on Harbord St. – Practical Ayurveda guides you on a bespoke wellness journey. You should try it. 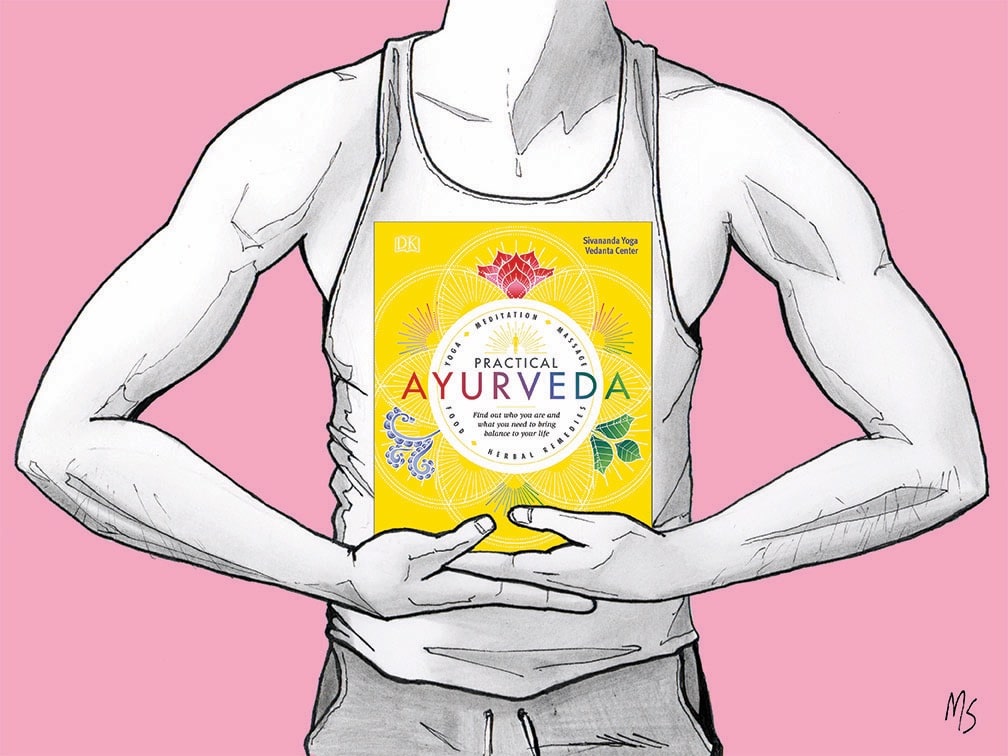 The Word Is Murder

Anthony Horowitz, New York Times bestselling author of Magpie Murders and Moriarty, is a crime writer. But not your typical crime writer. His characters are three-dimensional and his plots are unpredictable but here’s what sets Horowitz apart: he is a really good writer.

Wealthy Diana Cowper walks into a funeral home to plan her service. Six hours later, she’s dead, strangled with a curtain cord in her own home. The evening she’s killed, Anthony Horowitz, novelist and script writer (I know, right?) is out celebrating with his wife: he has just pressed Send on his latest novel, a Sherlock Holmes sequel commissioned by the Conan Doyle estate.

His mobile rings. It’s Daniel Hawthorne. Hawthorne is an eccentric, cranky and all-together-difficult, disgraced detective who now works as a freelance PD. Horowitz had worked with him on a five-part mini-series – the detective’s character was based on Hawthorne, and he had been hired to ensure the plot’s authenticity.

Hawthorn wants to hire Horowitz to write a book about him and a case he has been hired by the police to investigate. Yup. Diana Cowper’s murder. Horowitz accepts. And a complex Holmes and Watson relationship develops as the two untangle the clues and discover the truth behind Diana Cowper’s death.

Horowitz is the narrator and he tells the story in real time which pulls you immediately into the centre of the action – very TV-ish – and not an easy literary technique, which speaks to his talent as a writer.

The Word is Murder is smart, clever and hugely entertaining, a classic crime novel for a contemporary reader. I give it 5 out of 5. 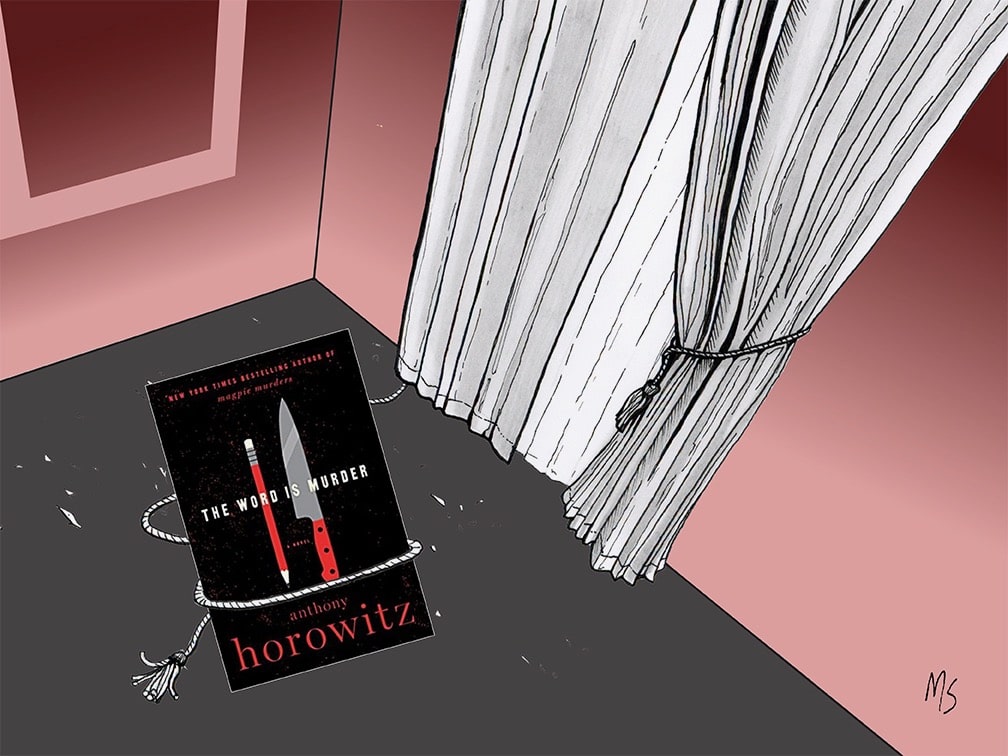 Choose Your Own Disaster

Millennial memoirs too often are kinda lame and self-indulgent coming-of-age stories that are not very interesting unless, perhaps, you are the Millennial author’s mom.

Dana Schwartz’s Choose Your Own Disaster is an exception.

Schwartz, a correspondent at Entertainment Weekly, has written for The New Yorker, The Guardian, the New York Observer, Marie Claire, Glamour, Mic, GQ, VICE, and more; she’s also a social media star with more than 83,000 Twitter followers. So she knows how to craft an engaging story.

Part quiz, part memoir, Choose Your Own Disaster, tweeted Schwartz recently, “is like if a personality quiz and a memoir had a baby that grew up to suffer from anxiety and depression”.

In CYOD, Schwartz revisits all the bad decisions she made in her twenties as she set out to find herself in a world where there are almost endless possible versions of who that might be.

An eating disorder, dating the wrong men, feeling fat, unattractive and not very smart by turns . . . Schwartz shares real-life stories any woman can relate to with a quirky and brutally honest sense of humour, and she packages it like a BuzzFeed quiz parody.

This is probably chick lit but maybe guys go through similar self-examination on the road to Big Boyhood? 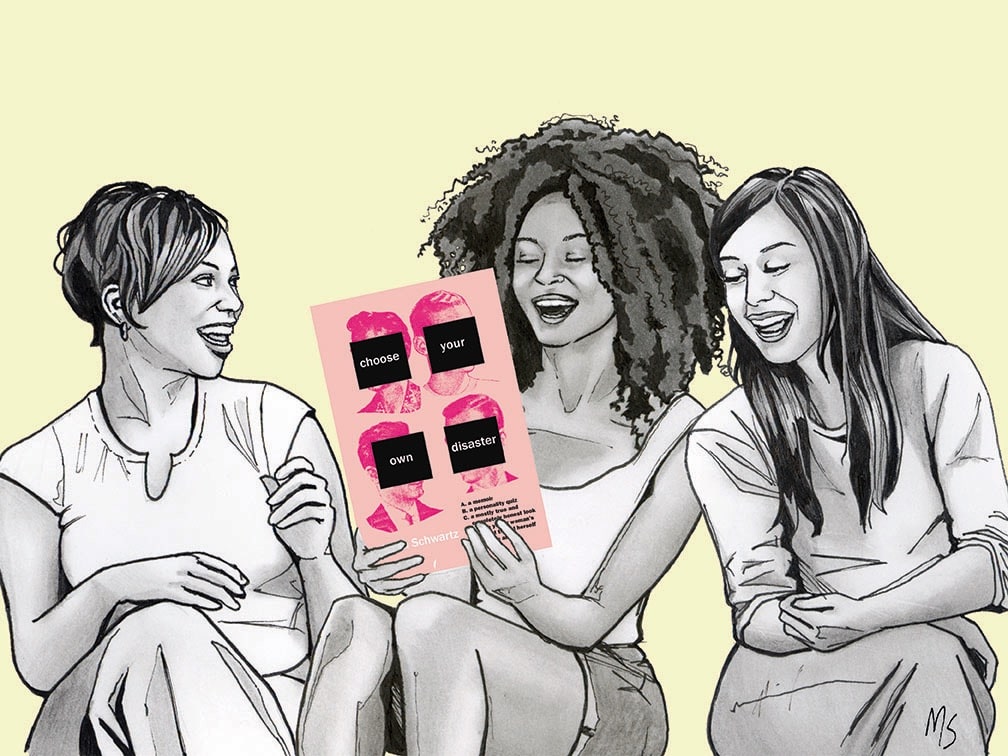 Kimberly Belle is the best-selling author of what her website calls “women’s suspense novels”. Had no idea this was a genre. I’d say she writes a pretty good everyone’s whodunit – but that might just be me – and Three Days Missing, her latest, is true to form.

Kat Jenkin’s eight-year-old son Ethan is not like the other kids. He’s uber smart – 158 IQ – and way odd – his ears are too big, his curls are too crazy and his finger-smudged glasses never sit straight on his nose. I love this kid. No surprise: Ethan is terrorized in class and on the playground, especially by stupid-spoiled bully Sammy Huntington.

Despite her misgivings, Kat signs Ethan up for a sleep-away school trip to an old gold rush town and as she drops him off at the bus, her inside voice whispers, “Please let him make a friend. And please keep him safe.”

The next morning, Kat is rudely awakened by pounding on her front door. It’s the police.

Stef Huntington, mother of Sammy and wife of Atlanta mayor Sam Huntington, gets a call from someone claiming to have taken her son.

Sammy isn’t missing. But Ethan is.

Weirdly – well, OK, this is fiction – Sammy looks like Ethan.

Has the wrong kid been kidnapped?

Three Days Missing is a twisty tale with a tidy tension build to a disappointingly predictable conclusion. But we’re talking easy summer reads, and this one is park bench perfect. 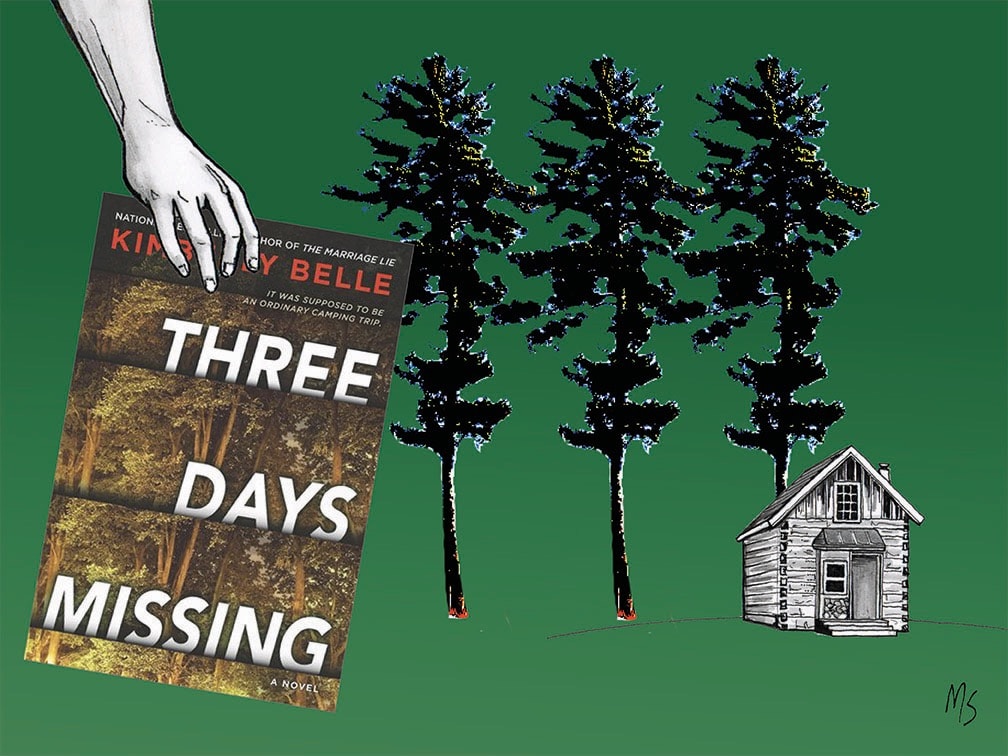