So, my book loving friends, I hope you had a totally awesome holiday. And if you did, I bet you’re feeling kinda gross – too much good food, too many smart cocktails…time to hit the gym.

Better idea. Pick up a copy of Kama Sutra Workout (DK Publishing, 2017) and shape up while you hook up. Seriously.

Inspired by the Kama Sutra, that ancient Hindu book offering lots of practical advice on having the best sex ever, Kama Sutra Workout ratchets it up a bunch of notches, with 300 sexercises that promise to rock your world while strengthening and toning pretty much every muscle in your body.

Each sexercise comes with a how-to illustration and a handy chart tallying the energy burned, muscles used, level of flexibility required and how long you need to hold each pose for maximum benefit. The last chapter offers 24 pre-programmed sex sessions depending on your mood – you follow a sequence of three positions for a total workout.

Some of the sexercises look to me like you’d have to be in six-pack shape to pull it off without suffering a 911 injury. But that said, there are lots of positions for fitness newbies, and I dunno, if the deep freeze continues this seems like a pretty steamy way to stay warm. 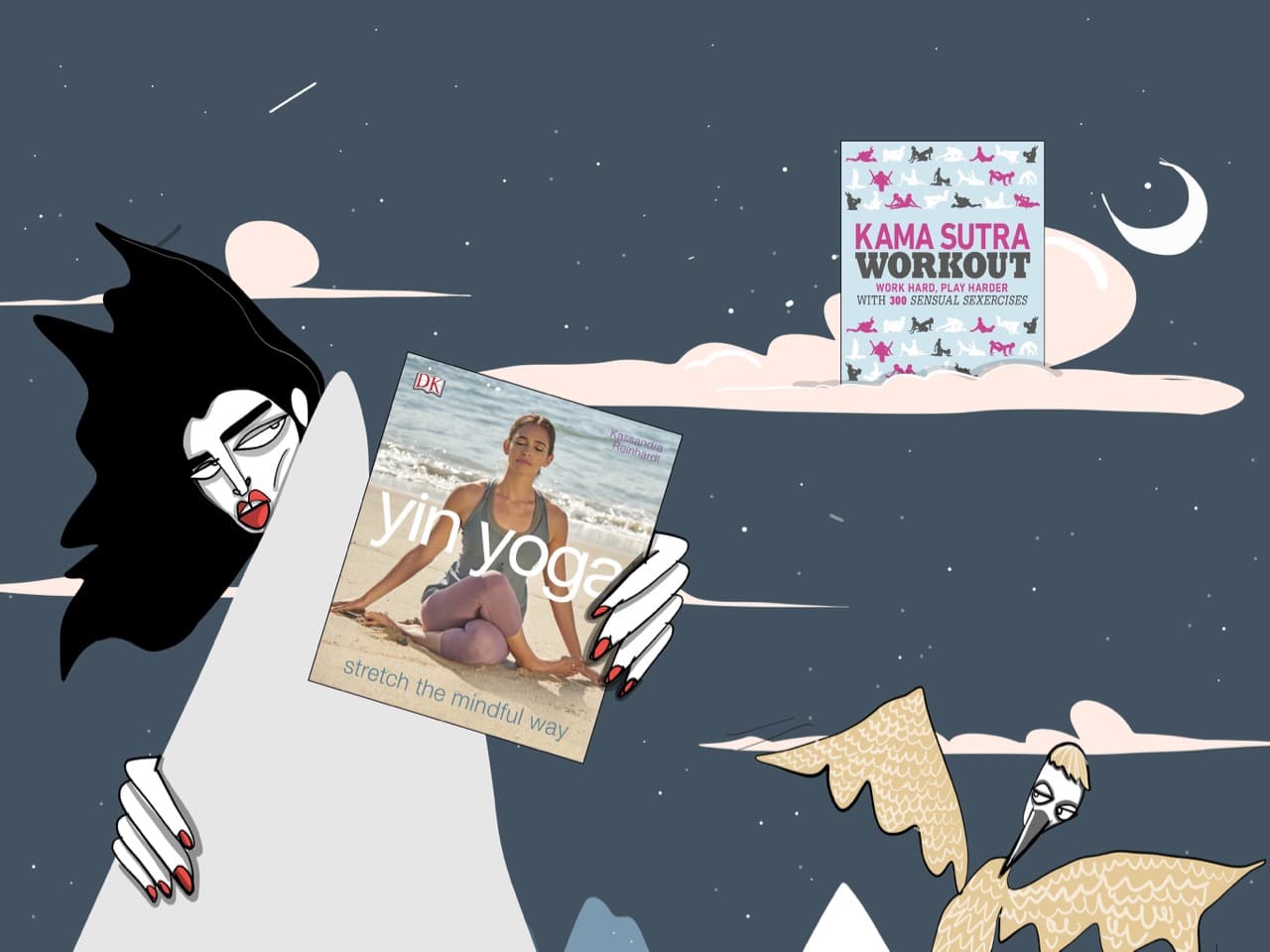 If you’re looking for a slower-paced workout – or maybe you want to up your flexibility consider Yin Yoga (DK Publishing, 2017).

Author Kassandra Reinhardt – a Canadian! – promises that yin yoga, unlike physically demanding yoga styles like vinyasa and power yoga, will introduce you to a life filled with more relaxation, greater mindfulness and less stress.

Here’s how it works. You concentrate on restorative poses that target your deeper fascia – a fibrous tissue layer that supports and protects muscles and other soft tissue – and you win with increased flexibility and improved joint health!

And that’s not all. Yin Yoga also emphasizes deeper and longer stretches with a focus on deep breathing and meditative poses that encourage you to clear your head – or find your edge, as Reinhardt describes the act of being still.

If you’re new to yoga, Yin Yoga makes it easy peasy to get started. You’ll find the basics like what you need to buy and how and when to practice.

Then Reinhardt walks you through more than 50 step-by-step poses that focus on specific areas of the body, complete with pictures and make-it-harder or make-it-easier tips.

She also includes 20 sequences that combine the poses – called asanas – into unique energy flows that will help you reach your goals, like improving your energy or improving your sleep. I am so in on those goals. 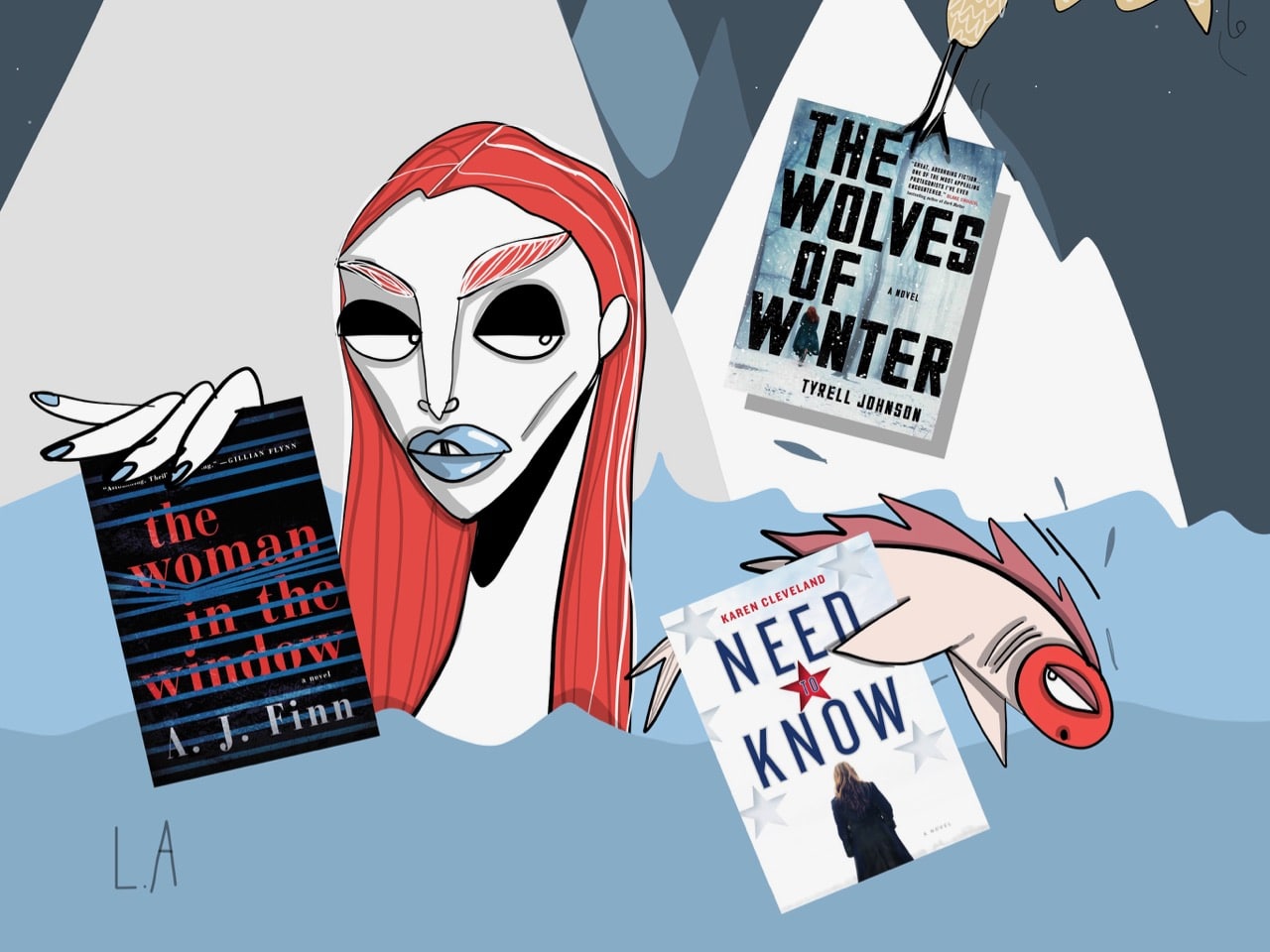 A Woman in the Window

A. J. Finn’s novel The Woman in the Window debuted with much fanfare: a heated auction, publication in 37 countries, movie rights snapped up . . .

This sort of feeding frenzy makes me skeptical – will the story live up to the hype? Yup. The Woman in the Window is a spooky psycho-thriller that will keep you up way past bedtime. I guarantee it.

Anna Fox hasn’t stepped out of her house in almost a year. Her husband and daughter have left her. A child psychologist, Anna mentors in a chat room for agoraphobics. And drinks a lot of wine, mostly Merlot. And watches the neighbourhood through the viewfinder on her camera.

Anna is fixated on the comings and goings of the Russell family across the street: mom, dad and teenage son Ethan.

Jane Russell pops by one day and the two hit it off over wine (lots) and chess. Anna likes Jane and hopes, perhaps, that she has made a friend. Shortly afterwards, Anna hears a terrified scream coming from the Russell house, and then witnesses what she is convinced is a murder.

She calls the police. Of course, considering how much she drinks and the cornucopia of drugs she takes, the cops are pretty sure she’s imagining things. Is she?

No one in The Woman in the Window is who they seem. And you will not guess the ending before you get to it. Really.

Vivian and Matt live an old school sort of life – four kids including one set of twins, a house in the suburbs close to good schools. Money’s tight but hey – that’s true for most young families right?

Matt’s an IT guy; Vivian works on the Russia desk at the CIA, charged with cracking the system Russia uses to keep track of their sleeper agents in the U.S.

Trolling through the hacked computer of a midlevel Russian handler, Vivian uncovers pictures of his five agents. Uh oh. One of those agents is Matt.

Should she turn him in? Or work a scam, betraying her country to keep her kids safe.

Cleveland was a CIA agent, so no wonder the spy stuff feels authentic. But she never fully develops her characters – they seem more Life Channel Movie of the Week than three dimensional blood and bone.

That said, I was fascinated by the CIA machinations, and the twist at the end gobsmacked me – did not see that coming. A way decent Sunday read. 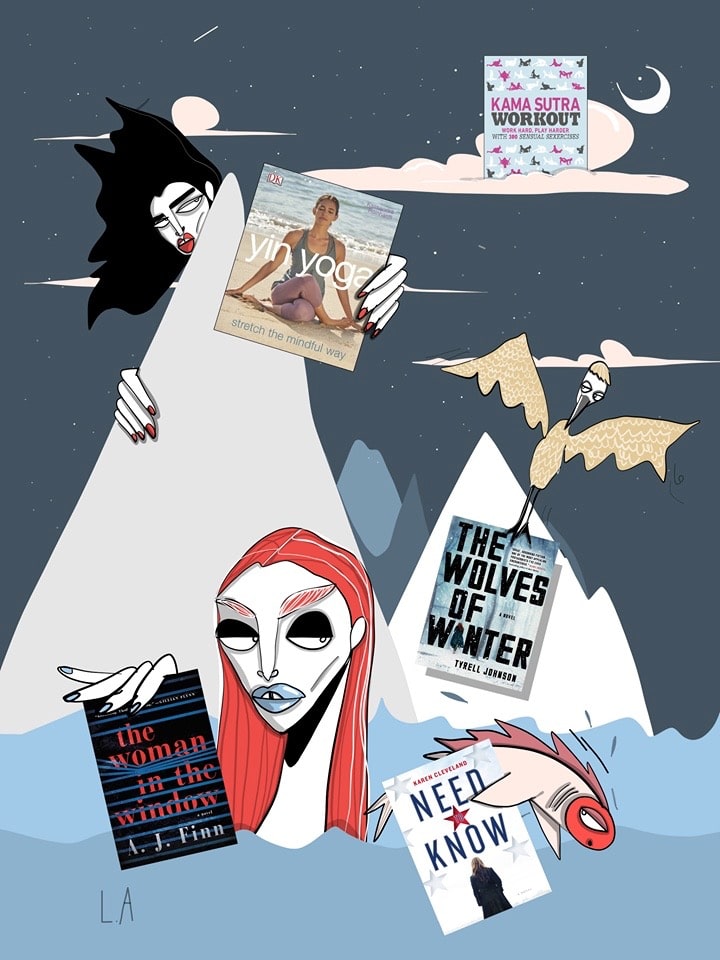 The Wolves of Winter

Tyrell Johnson’s The Wolves of Winter – another debut novel but without the hype – is a carefully crafted, and at times lyrically written, post-apocalyptic tale that stars the most engaging protagonist I’ve met in a long time.

The world has been ravaged by nuclear war and a catastrophic flu pandemic. Twenty-three-year-old Lynn McBride and her family survive in the quiet, white, frozen-most-of-the-year Yukon wilderness and might, for all she knows, be the last people on earth, except for the hulking mass of a man who lives nearby and steals from her traps.

One day, out of nowhere, Lynn encounters Jax and his sidekick Wolf, a Siberian husky, and her world explodes.

Jax is not a regular guy – he’s running from Immunity, the pre-war research group that was supposed to save humankind from the flu but mostly experimented on women and children and actually created the flu to bring down the enemy.

Immunity tracks down Jax and the killing begins – Lynn goes Delta Force with her crossbow and wrestles with what it means to kill a human being, even a psychopathic one. And then there’s Jax. Maybe he’s a hero and maybe he’s not but for sure he’s got Lynn thinking about a future out in the world.

The Wolves of Winter is a little The Hunger Games-y, and I wasn’t a fan of the series. But Johnson grabbed me from the get-go, inviting me into a world that feels scarily possible (Trump and Kim Jung-un? Just sayin’).