I pretty much support the Ten Commandments – no lying, no cheating, no murdering, no adultery, no treating people like bottom feeders. But full disclosure: I haven’t been to church since I was confirmed and I’m still not sure about the whole Heaven thing. That said, Judeo-Christian beliefs inform much of Western arts and letters, so I opened The Bible Book (DK Publishing 2018) with anticipation.

The Bible Book explores the Old and New Testaments with easy-to-understand language (no prothletizing!), contemporary graphics and really beautiful images. It explains the Bible’s most well known passages, shares 100 of the most important stories, and serves up profiles of key players, from Adam and Eve to Peter and Paul. Plus, the Bible sorts out the essential theology – like the Holy Trinity. Did you really understand that the Bible teaches that there is only one true God, but asserts that the Father is God, Jesus is God and the Holy Spirit is God – there is only one divine being but three divine persons within that being? Neither did I.

The Bible is the world’s most famous book. It has been translated into more languages – 363 to be exact – than any other text in history and is the most-published book since the printing press was invented in 1440. And its teachings have shaped social, economic and political developments, contributing to Western civilization’s emphasis on the value of the individual rather than the state.

The Bible is actually a collection of 66 books, written over 1400 years by 40 different people living in Africa, Asia and Europe. Add all those translations, which by their nature require interpretation, and you can see why the Bible might also be one of the most contentious books ever written. Some people believe every word to be literally true. Others consider the stories to be allegories.

Here’s how The Bible Book explains it. The theory of Limited Inspiration argues that God guided the authors but did not preserve then from making errors. The theory of Verbal Plenary Inspiration maintains that every word of the Bible has been directly “God-breathed” and preserved by God. Neo-orthodoxy teaches that the Bible was written by fallible human beings and only becomes the word of God when He reveals Himself through it.

Regardless of what theory rings true for you, there is no denying the Bible’s overarching influence. As Victor Hugo said, “England has two books; the Bible and Shakespeare. England made Shakespeare, but the Bible made England.” 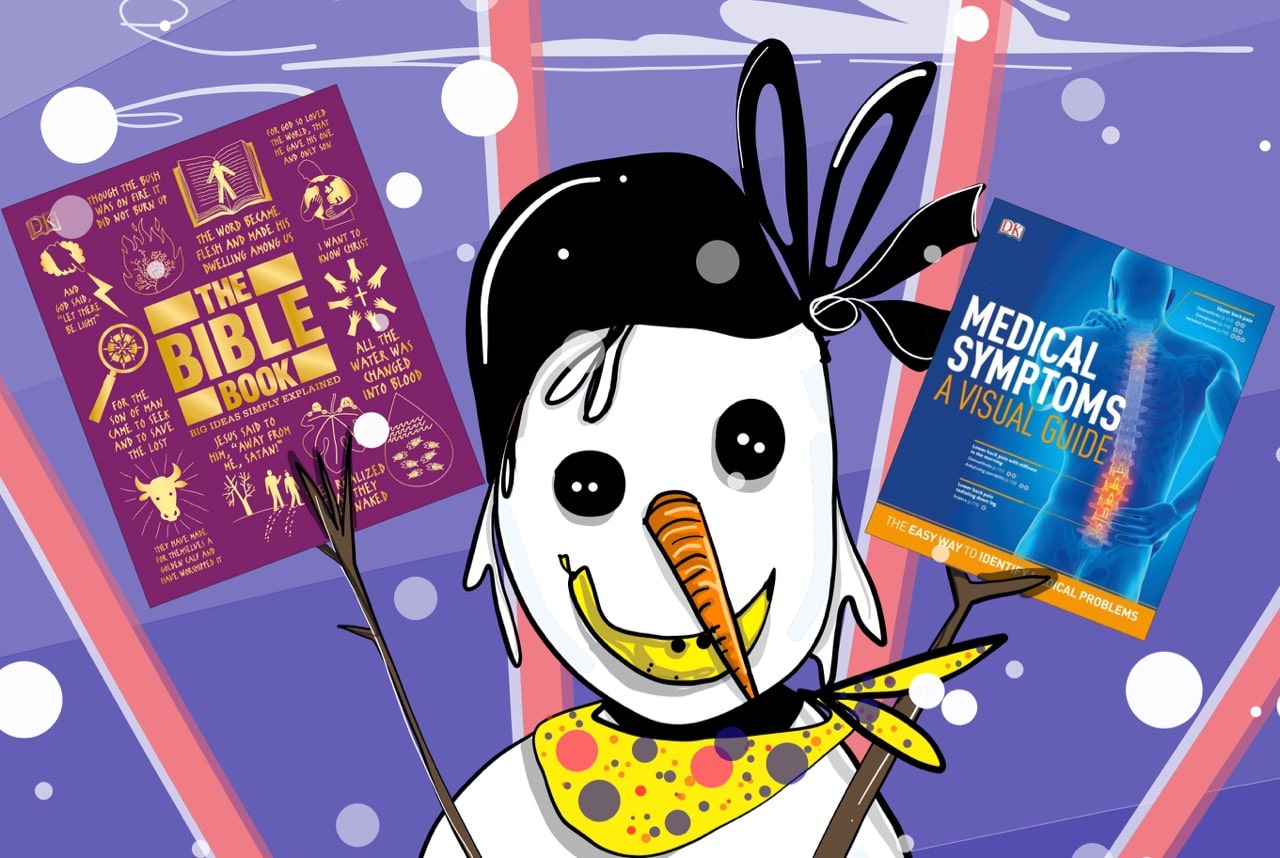 We’re bombarded by health info – some smart, a lot spurious – and I don’t know about you, but I, for one, don’t read much of it any more because it’s just too damned contradictory and confusing.

So I picked up Medical Symptoms: A Visual Guide (DK Publishing 2018) with more than a little scepticism. Wrong.

Medical Symptoms offers clear, simple, head-to-toe visual diagnostic guides that make it quick and easy to check out your symptoms, identify what the problem might be and decide whether you need to call 911, head to the walk in clinic or take two aspirin and go back to bed. And Medical Symptoms is written and edited by a team of actual doctors, not some random “wellness” bloggers, so I’m confident that the information is accurate.

The book is divided into three parts: a Whole Body Symptom Guide that speaks to general complaints like nausea or vomiting; a Head-to-Toe Symptom Guide that narrows your symptoms to a specific part of your body; and a Directory of Conditions, a cross-reference that takes you to easy-to-follow descriptions of the condition at the back of the book.

And if you need another reason to add this guide to your reference book collection consider this: when you have some sort of health symptom, you go to see your doctor but have trouble explaining exactly what’s wrong? Take Medical Symptoms with you, open it to the page that best describes how you’re feeling and bam – you’re on the road to recovery.

The Monk of Mokha

You know how you complain about some stupid fancy coffee costing $12.00 or more? Really? you grumble to yourself, sure the coffee shop is selling some sort of rip-off aspirational brand think. Me, too.

And shame on both of us. Because that cup of coffee is worth every penny and The Monk of Mokha, Dave Eggers latest nonfiction work, tells us why.

The Monk of Mokha is the real life story of 26-year-old Yemeni-American Mokhtar Alkhanshali and his seemingly impossible dream to “resurrect the art of Yemeni coffee and restore it to prominence throughout the world”.

Alkhanshali grew up in San Francisco’s Tenderloin district. Smart and ambitious but not much of a student, he worked all sorts of odd jobs including Lobby Ambassador (known as doorman everywhere else) at a snooty condominium.

He finally decided he needed a life plan. A calling, perhaps. He was Yemeni. Yemen had been growing coffee beans for 1200 years. He’d make Yemeni coffee prized, again.

Alkhanshali knew nothing about coffee, but that didn’t stop him: he charmed coffee gurus into mentoring him, developed a business plan, rustled up some angel investors and left for Yemen, where against all odds, he sold Yemeni coffee farmers on his idea, introduced them to new ways of harvesting and sorting the beans and in 2015, as Yemen slid into famine, got his first crate of beans out of the country and on its way to San Francisco.

Alkhanshali’s story reads like an action novel. Civil war. Al-Qaeda. Corruption. Pirates. Tribal conflicts. But it’s true. And when Eggers describes the MSC Luciana steaming under the Golden Gate Bridge on Sunday, February 26, 2016 and into the harbour at San Francisco, carrying 18,000kg of Alkhanshali’s coffee, I started clapping. For real.

The Monk of Mokha is an astonishing, never-say-never story of strength, courage, conviction and the power you wield when you believe in yourself. Plus: I now understand why good coffee costs so much. And I’m down with that. 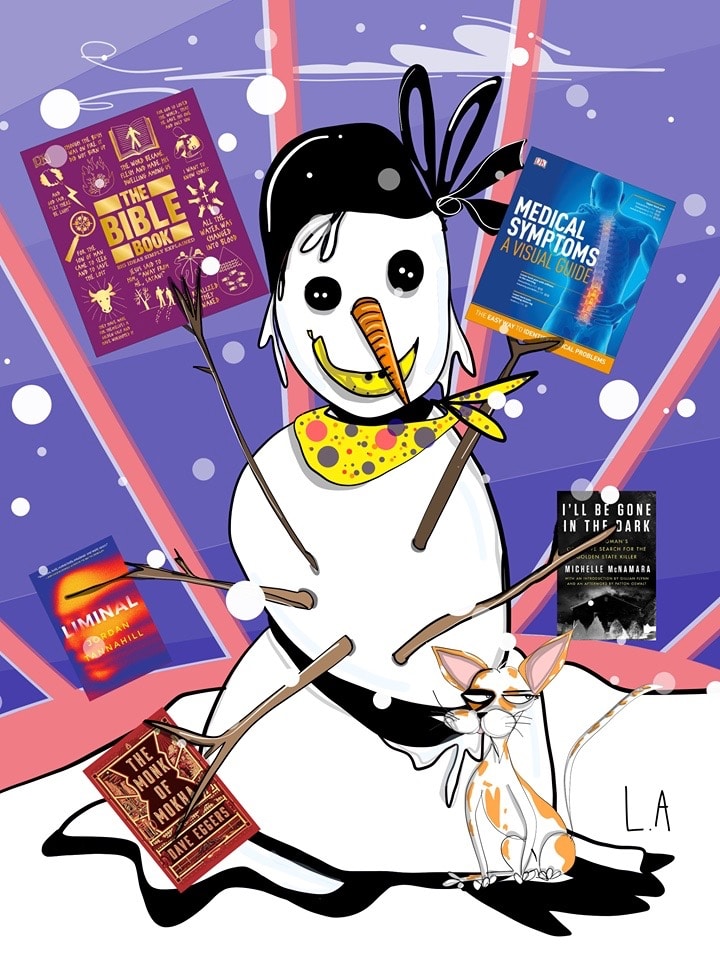 Jordan Tannahill is an award-winning author, playwright, filmmaker and theatre director. With Liminal, his debut novel, my bet is he’ll add award-winning novelist to his IMDb.

At 11:04 a.m. on January 21, 2017, Jordan (same name, different man), worried that his mom still hasn’t come downstairs, opens the door to her bedroom and sees her lying in bed, eyes closed and mouth agape.

She is either asleep. Or dead. And Jordan isn’t quite sure which.

In the intervening seconds, Jordan plays out his life and the people and events that have come to shape who he is, especially his mom and their tight but often prickly relationship.

Liminal is what critics call a literary novel as opposed to commercial or genre fiction. And that sometimes makes it a complicated read because the plot is not a straightforward story; the novel explores life, death, consciousness and the nature of self while it shares Jordan’s random recollection of his life’s high points. But don’t be scared. Bold, fearless and totally original, Liminal is beautifully written, and in between the existential musings, are wonderful and often entertaining stories about love, relationships and what it means to be human.

And just so you know, liminal means occupying a position at, or on both sides of, a boundary or threshold. His mother at the juncture of life and death.

I’ll Be Gone in the Dark

True crime journalist Michelle McNamara died in her sleep, aged 46, before she finished this extraordinary account of the serial rapist turned murderer she dubbed the Golden State Killer.

Bookended by an introduction by Gillian Flynn, author of Sharp Objects, Dark Places and the best-selling Gone Girl, and McNamara’s husband Patton Oswalt, stand up comic, actor and writer, I’ll Be Gone in the Dark chronicles the decade of fear and destruction committed by the violent predator: 50 sexual assaults and at least 10 murders up and down California’s west coast between 1976 and 1986.

Then, he disappeared, and three decades later, McNamara set out to find him and bring him to justice.

He snuck back in while they slept, waking up – and blinding – his victims with an uber bright flashlight.

He could see them; they couldn’t see him. But they recalled his voice – a guttural whisper through clenched teeth, mean and menacing.

McNamara was a first class investigative journalist, and her dogged determination – some might call it obsession – to put a face to the Golden State Killer brought her in contact with detectives, survivors and the bereaved. The result: a compelling, can’t-put-down snapshot of the time, the place and the people she – and he – touched.

When McNamara died, she was halfway through writing I’ll Be Gone in the Dark. Her lead researcher, Paul Haynes, and investigative journalist Billy Jensen, a friend of McNamara’s, worked together to organize the material she left behind, and write the final chapter.

This is truth, not fiction, so there is no tidy and comforting conclusion. The Golden State Killer has not been identified. Or caught. Perhaps he’s dead. Or perhaps he’s lying in wait.