If you’re thinking that being wired ‘round the clock is maybe not as good for your mind, body and soul as you once thought, pick up a copy of Practical Meditation: A Simple Step-by-Step Guide (DK Publishing, 2018) and discover a whole new way to de-stress, re-boot and enjoy living in the moment.

Meditation is an ancient practice dating from 5000 to 3500 BCE – wall art depicting people seated in meditative posture with half-closed eyes was discovered in the Indus Valley, in what is now Pakistan and northwest India. Over the centuries, the practice became central to a number of beliefs each with slightly different approaches and techniques.

Meditation is not mindfulness. Simply put, meditation is an exercise of your mind involving relaxation, stillness, looking inside, awareness, and focus. It delivers better focus, increased creativity, better learning and memory, awareness of the unconscious mind, decreased need for sleep and quicker processing of information.

OK, if I’ve sold you on the concept, Practical Mediation delivers what you need to get started, from myth-busting FAQs – Do I need a teacher? (No); Do I need to be calm to meditate? (No – meditation is what you need to do to get your there); I do yoga, isn’t that the same thing? (No –but yoga can enhance the benefits of meditation) to 30 step-by-step meditations and 10 Meditative Moments designed to help achieve specific outcomes such as meditation for problem solving, or better workplace or athletic performance.

Practical Meditation lives up to its title: it offers clear, practical, illustrated easy-to- understand meditations that you can actually fit into your time-starved world. 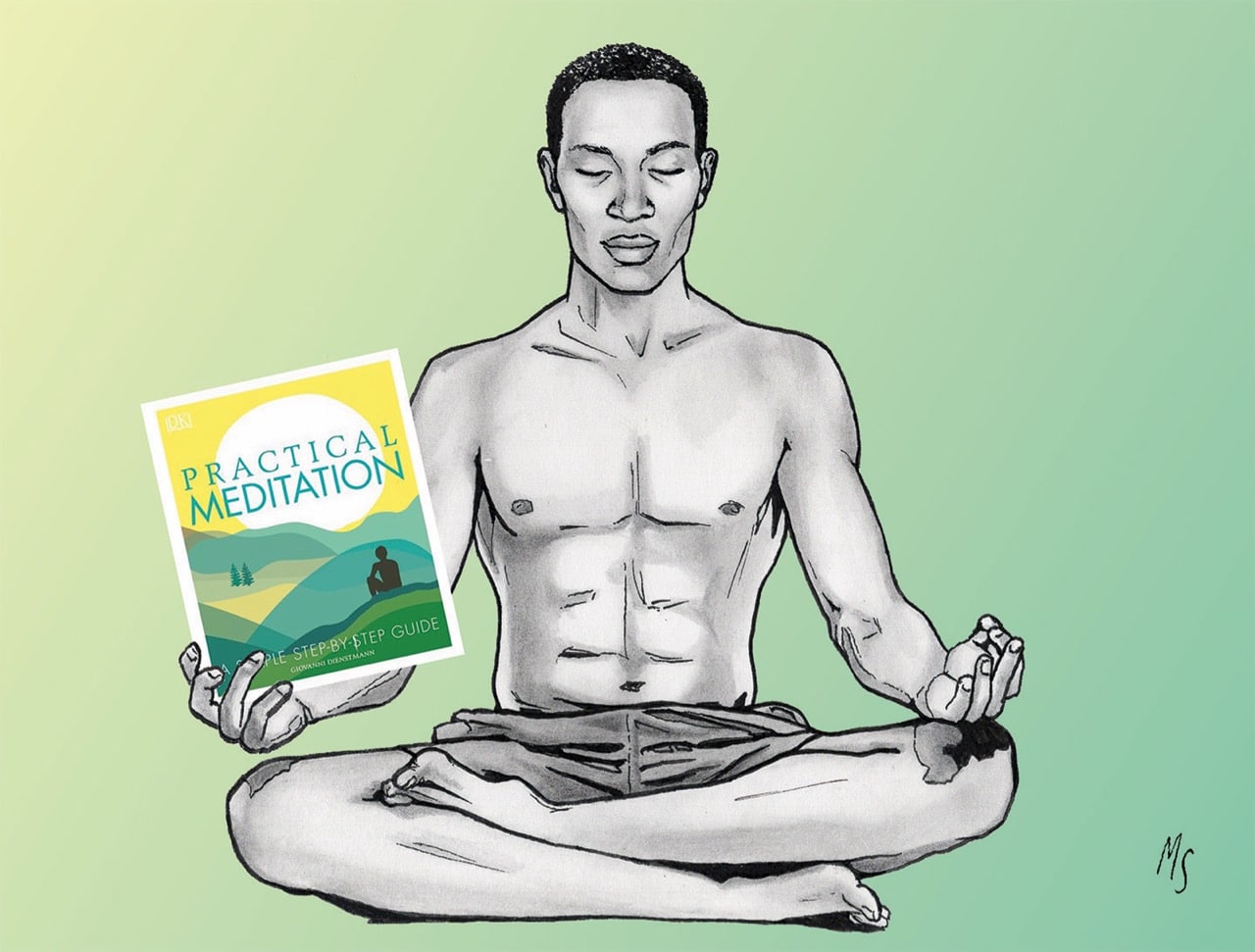 We’ve been mesmerized by the night sky since we first walked upright, I expect. And for good reason: we’re on an eternal quest for answers to our two most fundamental questions – where do we come from, and are we alone.

Astronomy: A Visual Guide (DK Publishing, 2018) is a sumptuous introduction to our own galaxy and the possibility of galaxies far, far way.

The pictures are nothing short of gob smacking – the one on pages 71 and 72 of a halo of dust around a star is take-your-breath-away beautiful – while the infographics and fact boxes offer you’re-kidding-me insight – did you know the Big Bang, currently the best model of how the Universe began, was not a conventional explosion, but rather an explosion of space itself, and the beginning of time?

Astronomy is divided into three chapters – History, The Universe and The Night Sky – and each chapter is further divided into subsections that explore fascinating stuff like the super huge black hole (yup) at the centre of our galaxy, what happens when a star runs out of energy (the core cools into a white dwarf, then a black dwarf and then rest in peace) and theories about the fate of the Universe (there are four and none of them are good).

A month-by-month guide to the night sky offers profiles of all 88 constellations, over 100 star charts and an Almanac of astronomical events over the next decade. Put January 21 in your calendar ‘cause we’re going to experience a total eclipse of the moon visible from North America, South America, Europe, Africa, and central Pacific Ocean.

Astronomy is a fascinating guide, whether or not you’re science-minded – I failed physics and I still understood the concepts. If you’re thinking of early holiday shopping, Astronomy would make an awesome family gift, coupled with a good pair of binoculars. 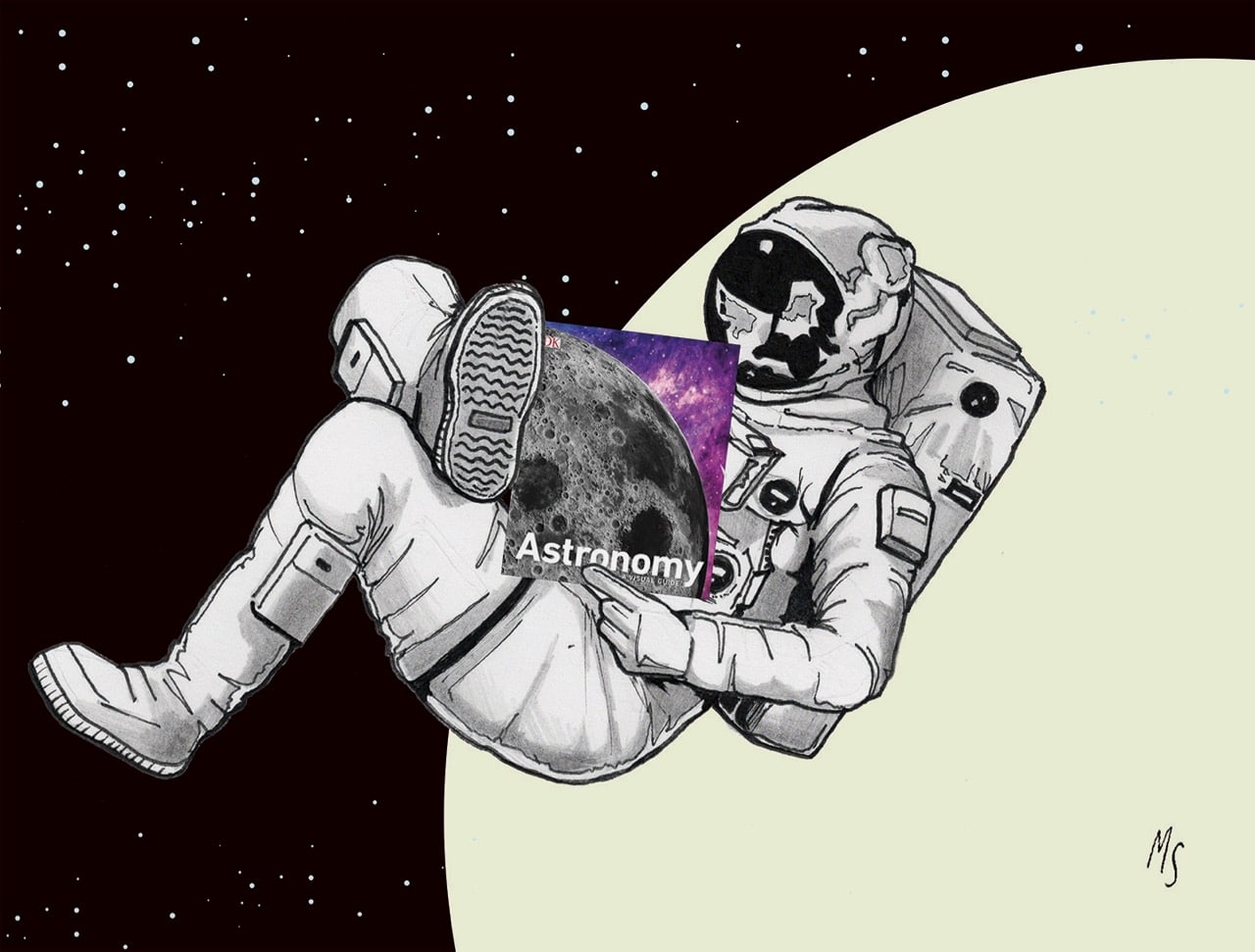 You read Margaret Atwood’s The Handmaid’s Tale, right? OK, at least you watched Season One of the TV series, which was pretty faithful to the book?

The Pure Movement, led by a far-right fundamentalist and TV evangelist, and backed by the President, who he pretty much got elected thanks to his enormous following, controls U.S. politicians, judges, Congress, the Senate – the whole shebang.

Like the guys in The Handmaid’s Tale, Pure Movement men swiftly take away women’s rights; I mean all of them. They can’t hold jobs or have bank accounts. Their passports are taken. Girls aren’t taught to read and write.

Wait. It gets worse. Women and girls are forbidden to speak more 100 words a day – on average women yak about 16,000 words a day, apparently. Scientific fact. They are forced to wear a Fitbit-y thing, even the toddler girls, that keeps track of the number of words they speak and sends out an electric shock when the wordy girls go over. The more they go over, the stronger the shock.

Dr. Jean McClellan, the story’s narrator, is a wife and mother of four, and was a leading cognitive linguist until the Pure Movement took over and gave her a kick back into the kitchen. Like Offred in The Handmaid’s Tale, Jean is mad as hell about the impact of the movement on her children’s – especially her daughter’s – future. But feels powerless to fight back.

When the president’s older brother damages his Wernicke’s area – the part of the brain that controls language – Jean is recruited to work on a cure and walks through the open door of revenge.

The plot gets unnecessarily complicated at this point and sometimes offers too much boring scientific detail (Dalcher earned her doctorate in theoretical linguistics from Georgetown University). But as a cautionary tale that seems scarily possible in today’s way-right-of-centre political climate, Vox is a must-read. 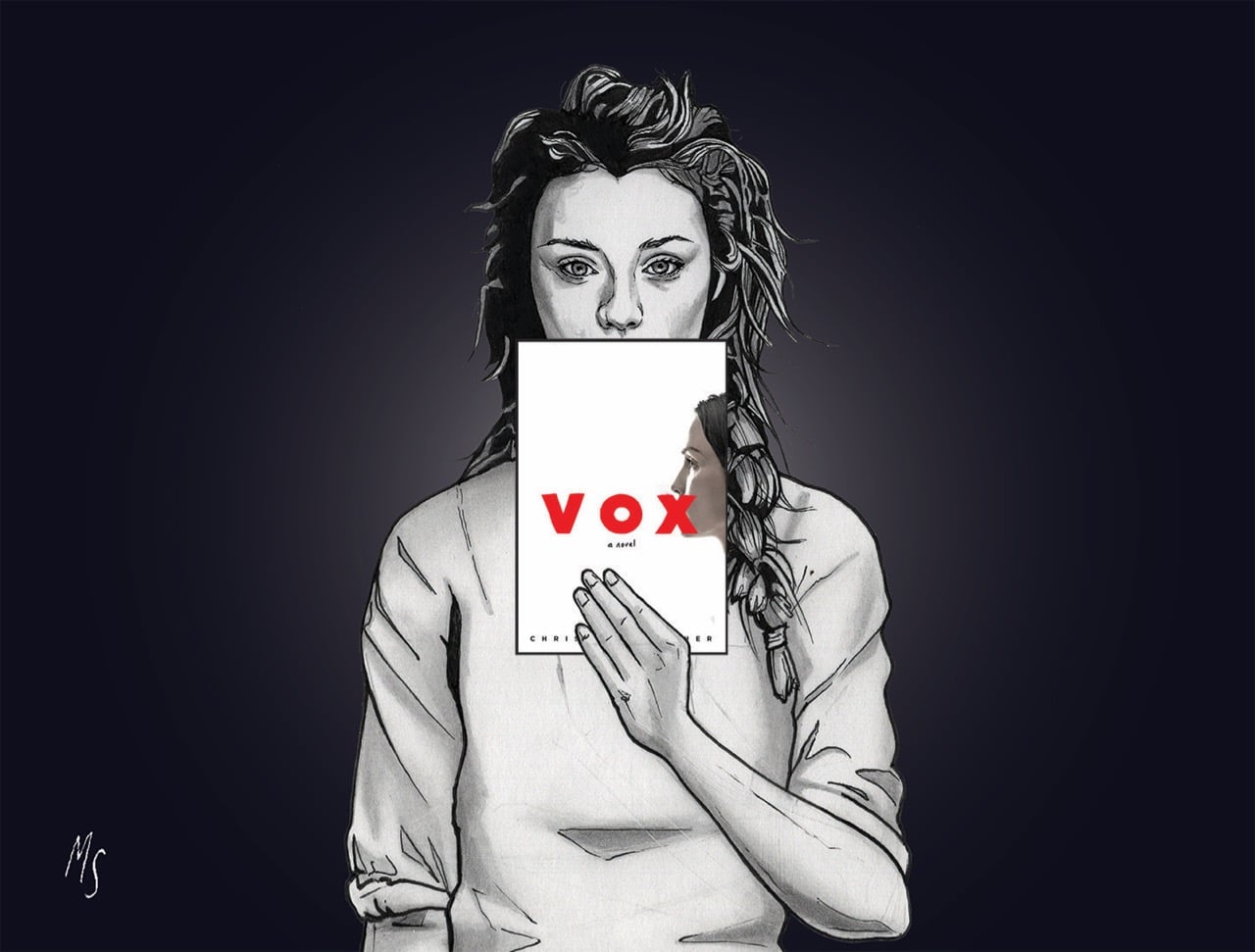 The latest from award-winning Miriam Toews – if you haven’t read The Flying Troutmans get a copy right now – continues what appears to be this month’s theme:

The silencing of women.

Women Talking, though, made me even angrier than Vox did because it’s based on true events.

Between 2005 and 2009, the women and girls in a traditional Mennonite colony in South America, would wake up groggy, their bodies covered in bruises. Had they been raped during the night? For a while, they kept their fears to themselves. But as the attacks continued, they began to share with each other and finally with their Bishop. No surprise, the community’s elders told the women they were confused, or were raped by ghosts or the devil because they had sinned, and a bunch of other ridiculous explanations that put the onus on the women; they were somehow to blame.

One night, one of the assaulted women managed to stay awake and caught a young man climbing through her window; he snitched on the other men in the ring. They had used a derivative of belladonna, a drug used to subdue cattle, to knock out the women and rape them – often more than once. The youngest victim was three; the oldest was a grandmother.

Women Talking imagines the after story. The attackers are in jail in another town, and the men, except for the elderly and the infirm, have left the community for 48 hours to post bail.

While they’re gone, eight women meet secretly in a hayloft to decide how to respond. Do they stay and forgive the men as the Bishop has instructed? Do they stay, but fight back? Or do they leave the only home they have ever known for a world they don’t understand.

Faithfully recording the discussions is August Epp, the only man the women trust, because they can’t read or write.

Women Talking is exactly that: a record of their conversation over 48 hours. It’s masterfully crafted, sometimes funny and sometimes heartbreaking, and the women are authentically portrayed in all their imperfect humanity.

Tweeted Margaret Atwood: WOMEN TALKING, by Miriam Toews: Don’t miss this one! This amazing, sad, shocking, but touching novel, based on a real-life event, could be right out of #TheHandmaidsTale. 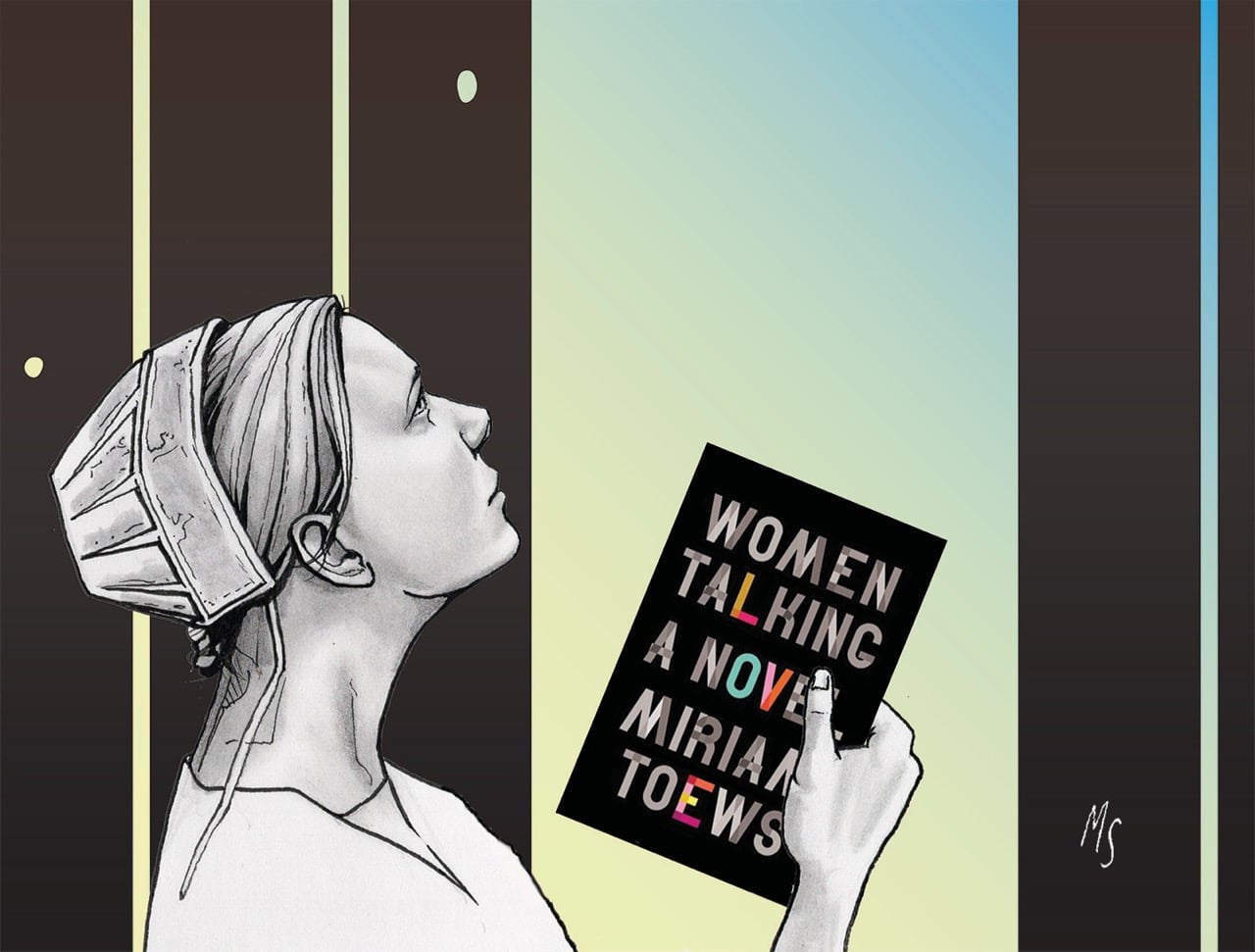 Shame on me: I had not heard of Vivek Shraya until I’m Afraid of Men – the back cover is cleverly entitled Men Are Afraid of Me – arrived in my mailbox.

A multi-talented artist whose body of work includes albums, films and books – she’s won accolades and 21 awards since 2001 – Shraya also teaches creative writing at the University of Calgary.

I’m Afraid of Men, a slim but powerful essay, explores how conventional expectations of masculinity were imposed on Shraya as a boy, and how they continue to shape her as a girl, and invites us to reimagine gender and meaning in the 21st century.

Shraya has not had an easy time of it. She was considered too girly as a boy and not girly enough when she began transitioning.

The disdain for women and femininity is insidious, Shraya tell us, “infecting even those who profess to love women, and it takes many forms (including scoffing at women’s studies programs). Using ‘sensitive’ as a pejorative and mechanism of restraint, as my dad did, is a form of misogyny.”

The bar defining a “good man” Shraya argues, is a low one. Consider the praise heaped on men for doing everyday domestic chores like washing dishes.

“Behaviours like the ones I have recounted,” she tells us, “sexist comments, intimidation, groping, violating boundaries, aggression, are seen as merely ‘typical’ for men. But ‘typical’ is dangerously interchangeable with ‘acceptable’. ‘Boys will be boys, after all’.”

I’m Afraid of Men is an invitation to consider the possibility of personal freedom in a genderless world. What would Shraya’s life have been like, she wonders, if her humanity had not been designated as either feminine or masculine?

Shraya’s challenge to all of us; “What would your life be if you didn’t impose these designations on yours? Might you then free me at last of my fear, and of your own?” 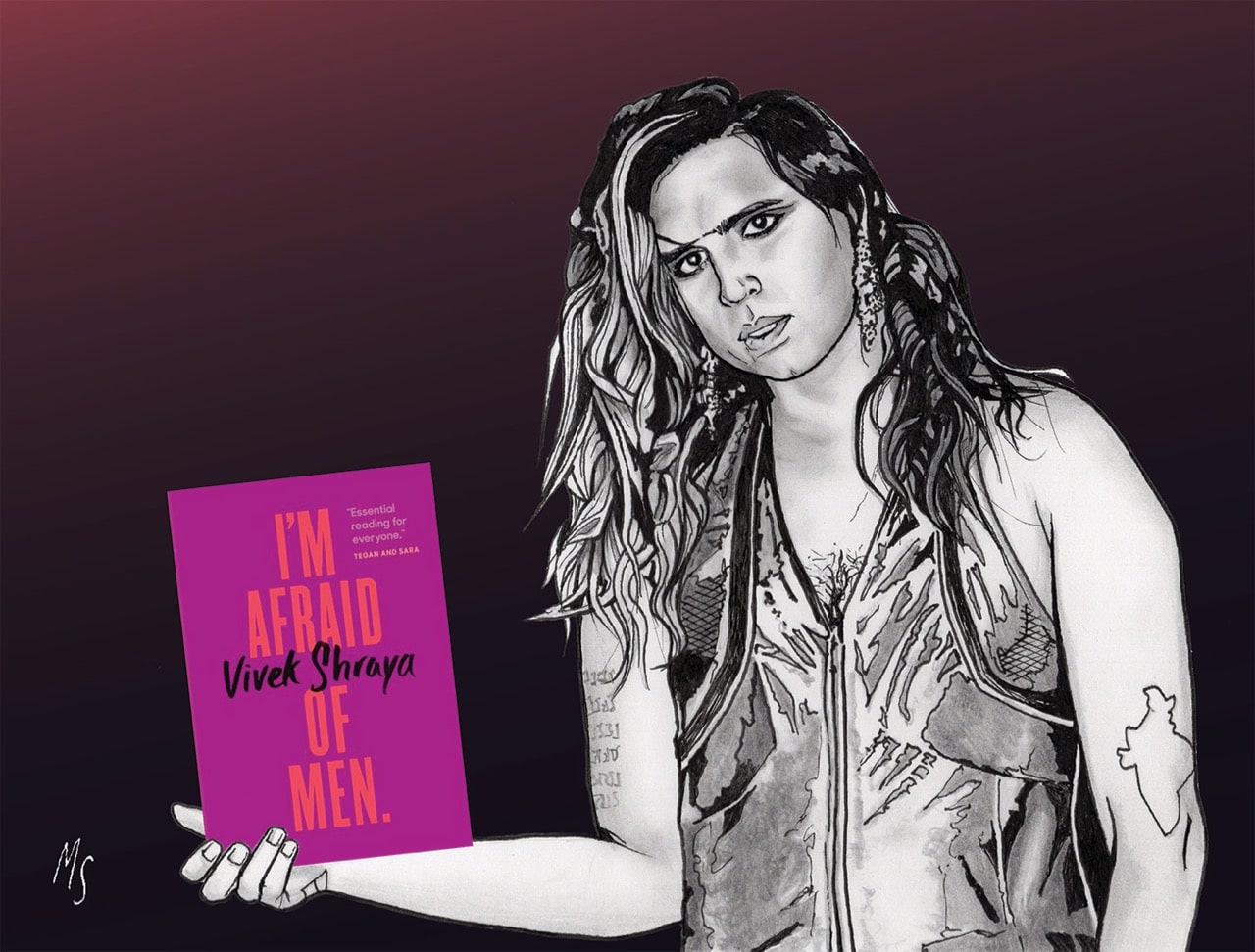