Bohemian Rhapsody has an impossible task: Covering the life and impact of Queen and its lead singer Freddie Mercury in two-hours and 10 minutes. Thankfully, the predictable narrative beats are backed-up by an Oscar winning performance from Rami Malek who absolutely embodies the late Queen frontman.

The narrative structure of the film is predictable, hitting most of the expected biopic beats. But it works for Bohemian Rhapsody because the natural progression of Freddie meeting his future bandmates, their awkward first gig and the eventual ups and downs of stardom, allows the audience to focus on the performance of Rami Malek knowing the story takes won’t take any weird left turns. 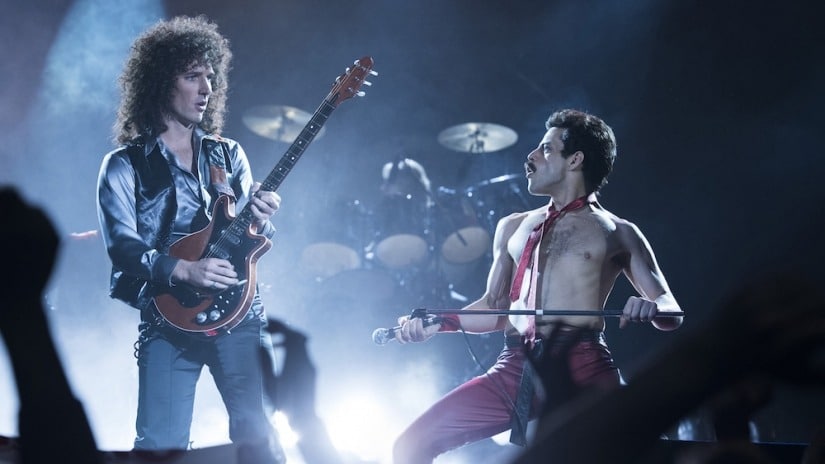 Queen formed in 1970 after Farrokh “Freddie” Bulsara saw Smile, the band that would become Queen, at a local college bar. Smile’s lead singer quits, Farrokh joins Brian May, Roger Taylor and John Deacon and by 1973 Queen records their first album with a legally minted Freddie Mercury. Fast forward through fame, drugs, band turmoil, the recording of Bohemian Rhapsody, an eventual AIDS diagnosis and a spectacular Live Aids concert performance and you have the movie more or less.

Sure, director Bryan Singer could have gone full “autur” a la Oliver Stone in 1991s The Doors, but that weird hallucinatory vibe never felt like Queen. The ability to sit back and follow along narratively, puts more emphasis on Freddie’s queer perspective, serving as a truncated history lesson.

My editor who I watched Bohemian Rhapsody with knew little about Freddie’s backstory, Live Aid and just how many barriers Mercury broke. So to listen to him, as a gay man, talk about his educational takeaways was refreshing and honest. And of course you can ask the question “was everything depicted in the film 100 percent accurate?” Of course not, it’s Hollywood after all. But the film does a great job of pulling back the veil on who Mercury and Queen were, making Bohemian Rhapsody feel more than an episode of Behind The Music.

Bohemian Rhapsody: A Star is Born

Most of the credit that this film works should be given to Rami Malek who, with no hyperbole, absolutely inhabits Freddie Mercury. If you know Malek in passing as “that dude from Mr. Robot, he’s unrecognizable here. Down to Mercury’s overbite and signature unwavering confidence in himself, Malek captures the loneliness of a rockstar who believes he has no peers to relate to.

The supporting cast does a good job with what they’re given, and each member of the band has their moment where the spotlight is on them, but make no mistake this is Malek’s movie. The one casting gripe I did have is with Mary Austin, Mercury’s one-time fiancé and life-long friend. Actress Lucy Boynton does a great job, but the setup to their relationship just feels like an excuse for Mercury to realize his queer identity and she’s quickly cast aside to confidante status and appears seldomly.

A Star Is Born: Addiction Destroys A Rockstar Romance

And while the film does do a decent job of exploring Mercury’s complicated relationship with his sexuality, it does all feel a tad superficial. How do we know it’s not cool to be gay in 1970s London? Insert uptight religious parents here. How do we know society is super duper homophobic at this point in history? Let’s have both a literal press conference where all the questions are asking after Mercury’s private life and throw in a televised “tell-all” with Mercury’s longtime lover, “friend” and all around ass hat Paul Prenter, played by Allen Leech.

I’d love to know what the real Paul Prenter thinks of the film since he is truly an asshole throughout, playing the narratively cliched “villain,” who loves Mercury so much he doesn’t want anyone else around. They party incessantly, with Jim doing the “Sure I’ll make sure he gets the message,” and of course doing no such thing, and dabbling in the 1970s cliche of how gay men were thought to have acted.

One of those phone messages is about the 1985 Live Aid mega concert. Mercury finds out who Paul really is, and in a very dramatic standing in the rain scene, cuts Paul off before running off to apologize profusely to the other members of the band. Bohemian Rhapsody is a good primer for understanding gay culture at the time, but the film doesn’t spend nearly enough time on the actual impact Mercury had on queer culture. A montage summarizing the “death sentence” that was AIDS at the time, does most of this work and some liner notes serving as an epilogue let us know Mercury lived happily with his partner Jim Hutton till his death in 1991.

Say what you will about Singer ( I could say a lot) but the guy knows how to direct a film, and it shows with the recreation of Live Aid. It’s a breathtaking 20 minutes of camera movement, some outstanding CGI—no they didn’t actually fill Wembley with 70,000 people—and a charismatic Rami singing his ass off. It’s a sequence the entire film is building too, the opening few minutes stopping short of Queen walking on stage and then flipping back to 1970.

Overall Bohemian Rhapsody is a flawed film with some interesting messaging and educational beats that don’t really go anywhere. It’s worth seeing in theatres for the pleasure of Malek’s performance and the surprising Mike Myers cameo which I won’t spoil here. It’s easy to see why Sacha Baron Cohen—who was initially cast as Mercury—dropped out of the film; Bohemian Rhapsody dips its toe into serious biopic, only to pull back and give us the fluffy Mercury — the least important part of a musical icon.