As far as crime saga’s go Birds of Passage (Pájaros de verano) is a slow, specific and brutal origin story of a Colombian drug cartel told from the perspective of an indigenous community whose lives and culture were destroyed because of it.

Directed by Cristina Gallego and Ciro Guerra, (the duo behind last year’s Embrace of the Serpent) and enjoying its Canadian premiere at the 2018 Toronto International Film Festival, Birds of Passage is dreamlike in its visuals and visceral in its execution. The core narrative revolves around Rapayet, a young man of the Wayuu tribe who wins the affection of a young women and her family through a large dowry he obtains through the sale of marijuana. 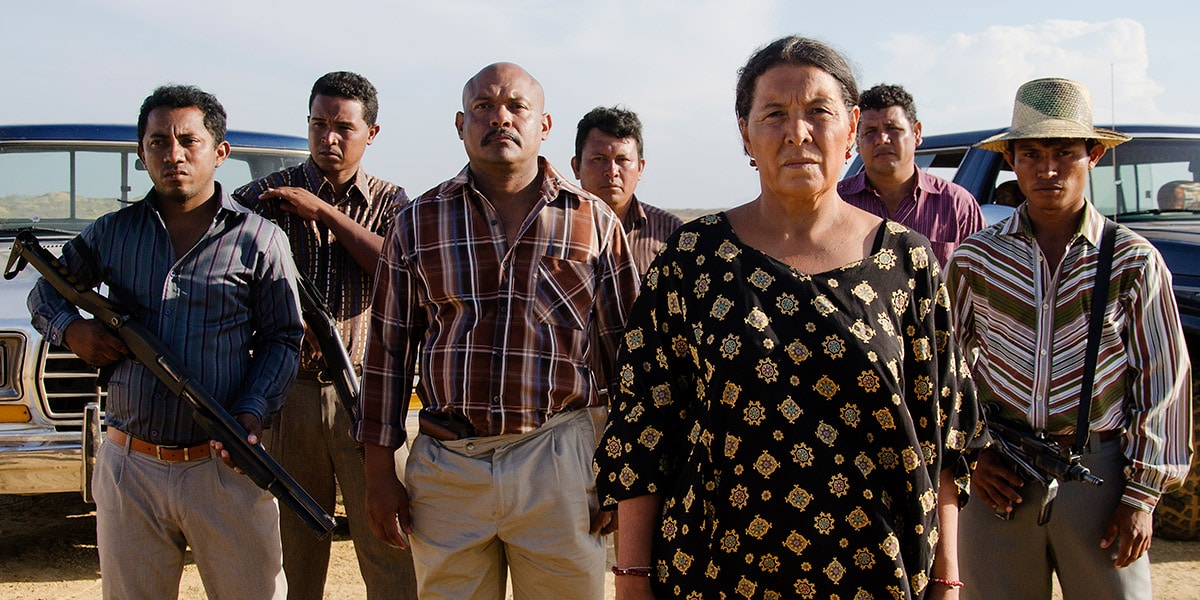 Set in the late 60s and early 70s, Birds of Passage recounts the brutal decade that saw the rise of drug trafficking in Columbia. What starts out as a quick way to make cash devolves into fratricide and the downfall of an entire community. Written by Maria Camila Arias and Jacques Toulemonde Vidal, the film is split into five songs or chapters, depicting the rise and eventual fall of the Wayuu community.

The narrative is predictable and you can see the specific story beats coming a mile a way, but it’s in the execution that makes Birds of Passage stand out. At times brutal and bloody, it’s also sublimely beautiful. The orange and browns of the desert where Rapayet and his community live are contrasted by the lush mountain vegetation of his uncles compound – a man they ultimately do business with and go to war against.

Jose Acosta as Rapayet is astoundingly good. He’s a sentimental man in a land where harsh realities leave no room for emotion. He loves his wife (played by the supremely confident Natalia Reyes) and wants to do good by his community. But it’s Carmiña Martínez as the unnamed, respected soothsayer that steals the show. She’s both calculating and spiritual, understanding what needs to be done to see her family prosper, even if it contributes to their eventual demise.

Gallego and Guerra take their time building suspense, and even from the opening scene there’s a tension in the air that had me waiting for the eventual moment of violence to spur on the rest of the film. Shots linger on desert scenery and of singing elders, who in some respects predict the events to come. Birds of Passage takes its time in building the world it wants us to explore, and has no qualms about ripping it all away from us when it comes time for the eventual bloodshed.

Birds of Passage shares the inevitability of modern civilization imposing itself on traditional indigenous life. It’s certainly not an easy film to watch, but one that’s worth the investment. Despite some rote narrative choices, the ways in which the film puts its perspective front and centre, is refreshing and candid.