Enjoying its world premiere at the 2018 Toronto International Film Festival, Ben is Back is a timely tearjerker that shares one families struggle with opioid addiction.

While her mother appears thrilled for her brothers return, Ivy looks horrified, texting her father urgently to come home. The audience experiences further unease as Holly runs up the stairs to hide prescription pill bottles, cash and jewelry in her closet. While Ben appears like he has the best intentions to celebrate the holidays with his family, writer/director Peter Hedges captures an anxiousness that is foreboding. 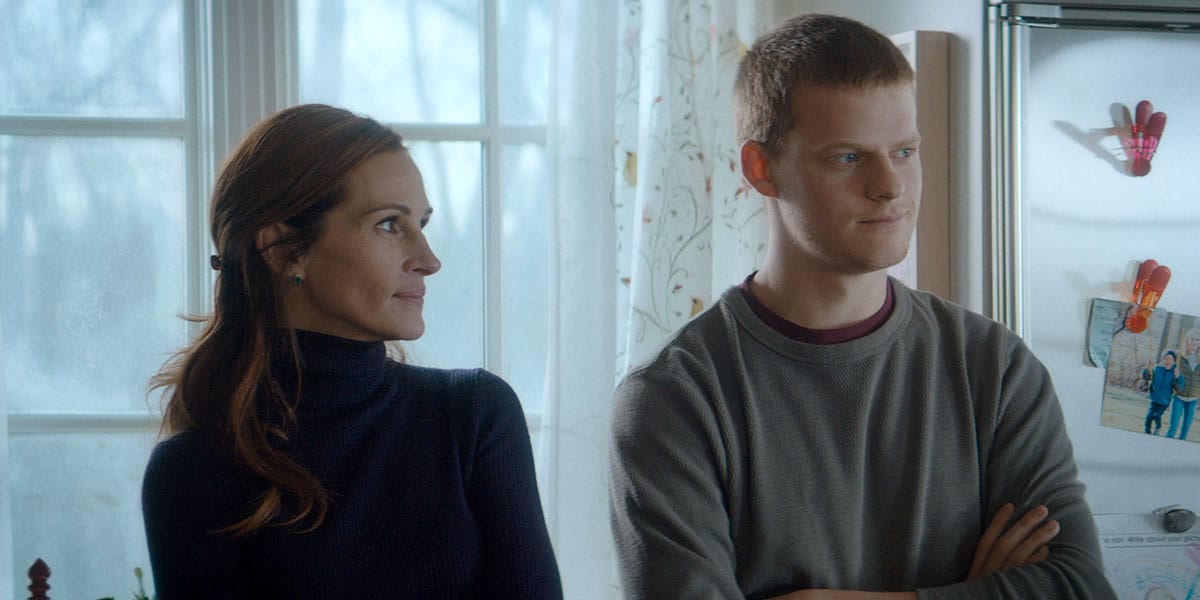 After Ben shares that his AA sponsor suggested he is ready to return home for the holidays, the family agree to allow him to stay for 24 hours as long as their eyes are always on him. While Ben’s family are encouraged by his sobriety, (he’s forced to take a drug test with the door open as a condition of his overnight stay), the destruction of his past behaviour has everyone on edge.

Hedges’ smart script unravels over a 24-hour period, brilliantly capturing a family, community, and country suffering from the opioid crisis. When Ben realizes he doesn’t have a gift to give his family members on Christmas morning his mother reluctantly agrees to take him to the mall to pick up a few things. It is in this tender motherly moment when the family’s hopeful holiday turns into an absolute nightmare.

The audience slowly beings to piece the past together. Holly runs into their family doctor at the mall food court and berates him for getting her son addicted to pain medication after he suffered from a snowboarding accident. After Ben spots an old “friend” he’s left triggered and shaking. His mother drives him to an impromptu AA meeting where he touchingly shares his story with a group of strangers. Afterwards one of the young women at the meeting comes up to him to thank him for sharing his story. She shocking informs him it’s her first meeting and that he was her drug dealer who got her hooked. The audience gasps when she tearfully whispers, “I want to get high just one more time with you.”

That evening the family heads to a Christmas Eve service at their church and run into a blank-faced woman who’s daughter has recently died from opioid addiction (we later learn Ben got her hooked). When they return home the family realizes the house has been broken into, Christmas tree smashed onto the floor and the beloved dog has disappeared. Ben is certain a local drug lord is threatening him over an unpaid debt. Wracked with guilt he bursts out the door in hopes of finding the family pup. Holly chases him down the street, insisting that he isn’t going anywhere without her.

It is during this second half of the film when you need to ensure you’ve lined your pockets with Kleenex. In a matter of a few hours Holly is exposed to a shocking number of her sons secrets, the worst of which makes her vomit in disgust. Ben embarrassingly admits that his high school history teacher provided him with pills in exchange for sexual favours.

Julia Roberts offers her best performance in years, perfectly capturing a desperate mother driving deep into the seedy underworld of America’s opiate crisis in hopes of saving her son. Lucas Hedges offers a gut-punching performance that any addict will weep over. Ben Is Back will leave you breathless, and if you’re a parent with kids it’ll inspire you to run home and hug each and every one of them a little more tightly.