It doesn’t take much coaxing when it comes to road trips. I’m a firm believer that sometimes all you need is your most winsome pal, a tank full of gas, Google Maps, and the open road to put the Earth back on its axis – a bottle or two of vino doesn’t hurt either.

During this sunny time of year all signs point to vineland and the wineries of Niagara on the Lake. It’s an adventure that can often feel both exciting and daunting, when you’re unsure about where to go or if you’re trying to fit too much into one day. For that, the Wineries of Niagara on the Lake have created a handy pass that makes sipping your way through the best of the region all the more attractive.

They’ve recently launched the Winemakers’ Selections Tasting Pass which allows visiting oenophiles to enjoy one special sample at each of the 25 wineries in Niagara-on-the-Lake any day of the year. On a recent trip to the region we decided to put our passes to use, stopping in to sip at wineries we’d not yet had the pleasure of skipping through. 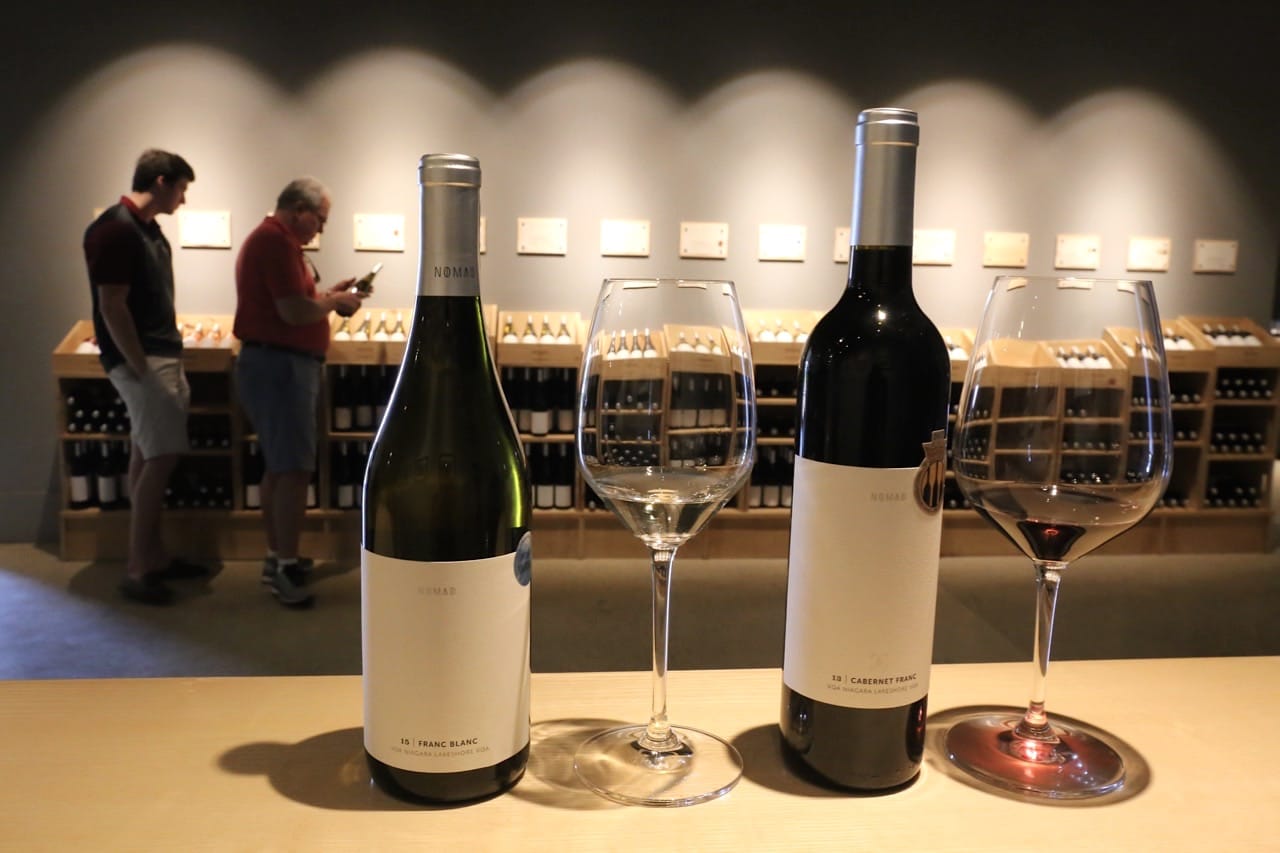 Nomad is unassuming, subtle and upon walking in the front doors feels very minimal in look, much like that of a modern art gallery. Through a minimalist approach they are creating wines that are clean and unadulterated expressions of Niagara’s terroir. In business now for 7 years, the winery prides itself on being off the grid in that they are eco-friendly using geo thermal heating, cooling, solar panels, and reused rainwater.

What’s most interesting about the winery is its innovative labels – they’re blank. They want you to crate your own message, memory or moment by drawing something on the label. Clever in that a nomad is a bit of a wanderer, on a journey. 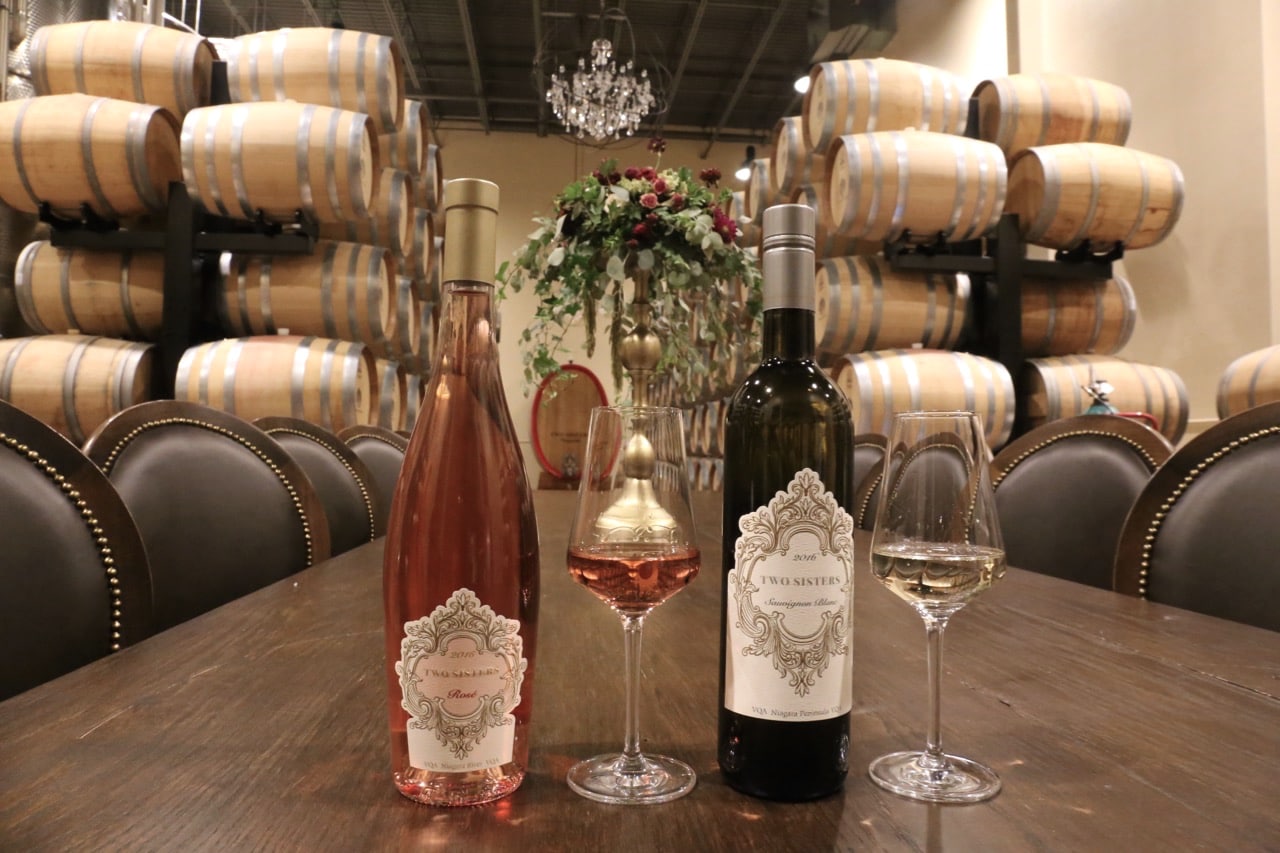 Now in its third summer, Two Sisters Vineyards focuses on Bordeaux style wine and is committed to producing ultra-premium reds. They take a non-interventionist approach to crafting their wines, wanting the varietal to speak for itself, ensuring not to over-make their wines. The winery celebrates the varieties the estate grows best; Cabernet Franc with its earthy structure, Cabernet Sauvignon for its rich, muscular presence and Merlot for its perfumed, elegant and harmonious synergy of red and dark fruit. It’s truly a place people are talking about, with a 2-week waiting list to score a reservation at Kitchen 76, the on-premise restaurant and terrace. Kitchen 76 features seasonal flavours with a rustic Italian menu inspired by family recipes of the two sisters. It is an extension of their family home, a place to savour life’s little moments and occasions. 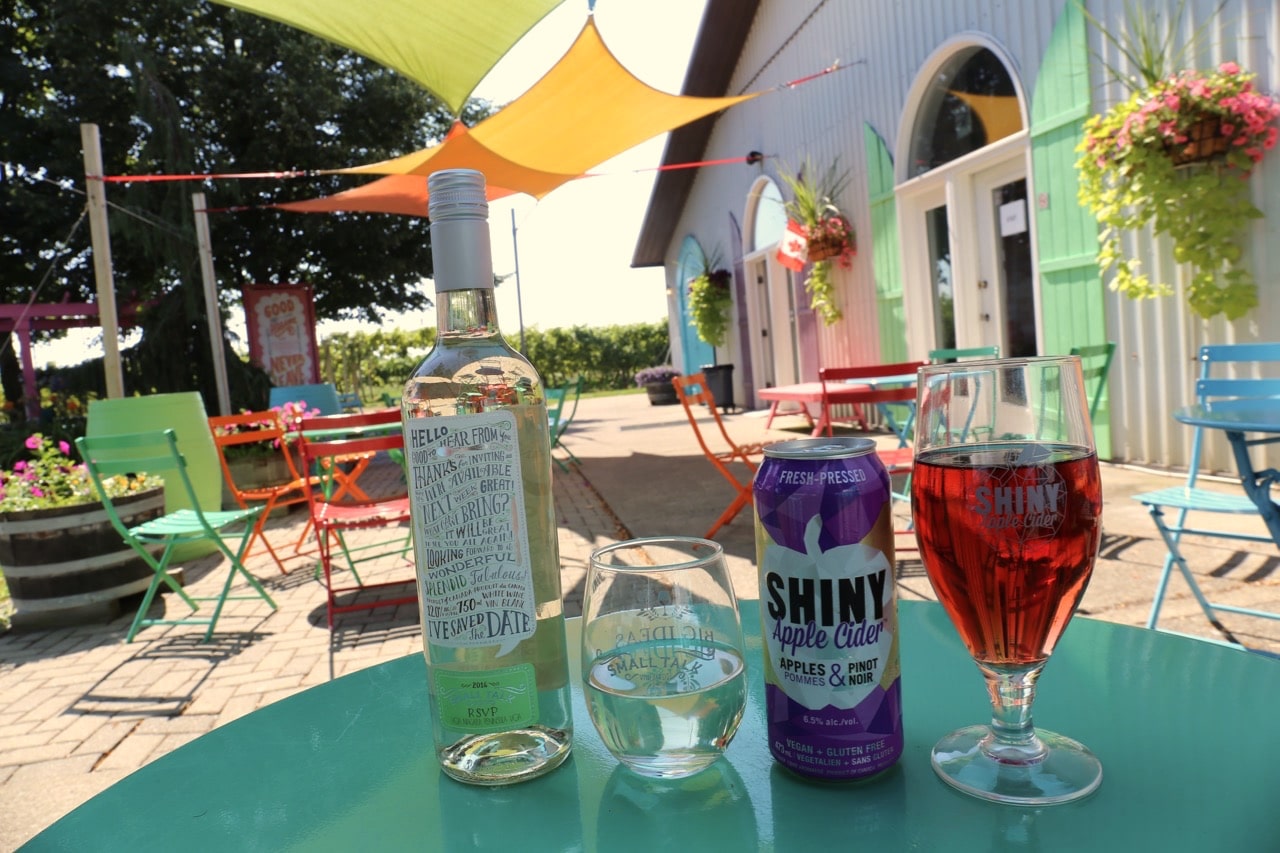 Cute and bright pastel colours decorating everything from petite table and chairs to paint on the walls and awnings. Small Talk Vineyard is all about the talk, small talk specifically sparking conversation at a dinner party, with its bottles filling in the gap between what you think and what you say. On the front, their bottles highlight simple pleasantries and things one might say when invited to dine with friends. Standard responses such as – “thanks for inviting us, good to hear from you or looking forward to it.” While on the flip side, the back of their bottles highlight the more honest or judgmental thoughts that usually go unsaid – “good riddance we thought you’d never leave, such bores zzzzzz.”

Most unique to this winery is their Cider offering, a journey that began three years ago when they were looking for a sparkling wine replacement. Refreshing and easy-drinking, the cider uses 9 different varieties of red apples from across Ontario which allows them to make Shiny naturally sweetened beverages. 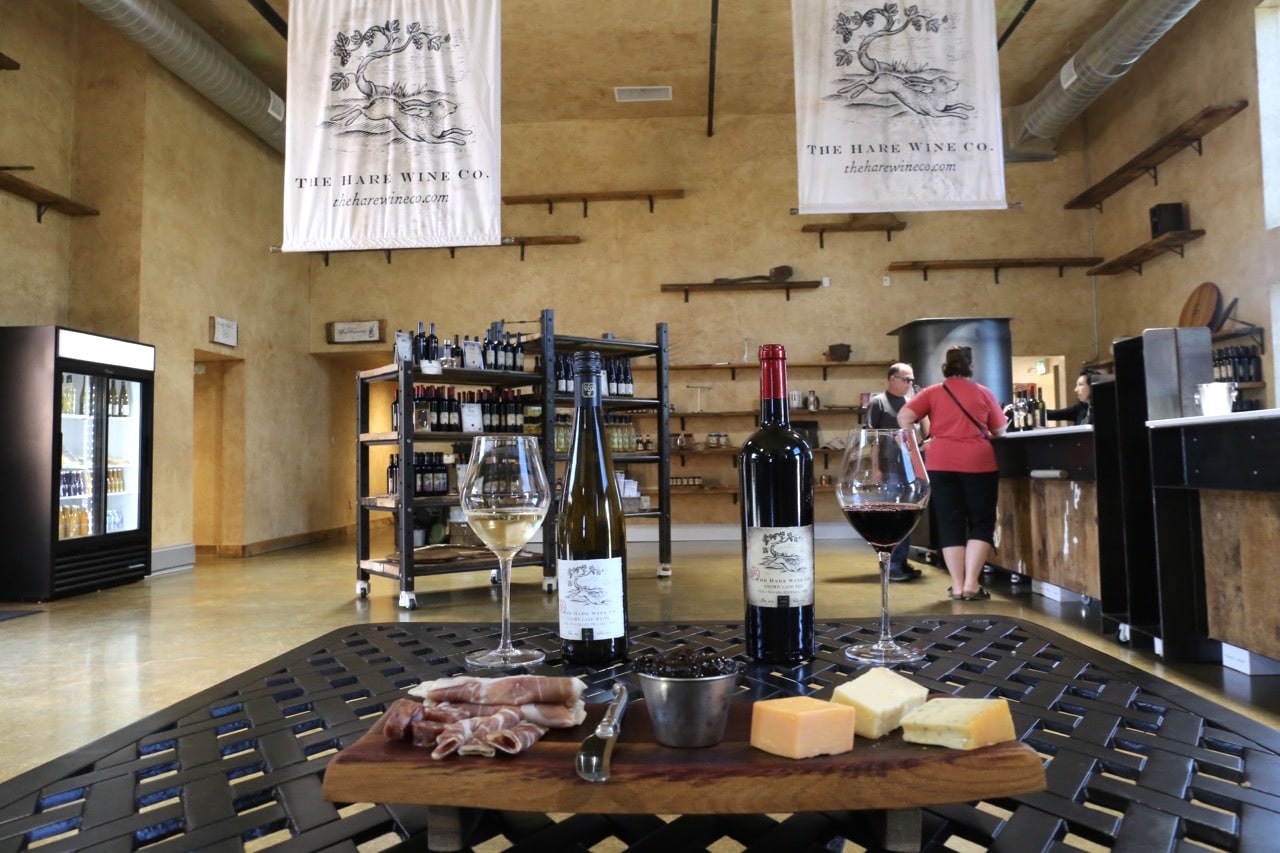 The Hare, fittingly a symbol of fertility and good fortune, offers one of Niagara-on-the-Lake’s newest winery experiences, having opened just 9 months ago.

The Hare Wine Co story begins at the end of the American Revolution when Colonel John Butler’s Rangers disbanded and many of them were granted land in the Niagara Township as a reward for their services. These petitions were the inspiration for Crown Land Collection as the property was deeded as Lot 171 and granted to Nathanial Hanes by the crown in 1798. He became one of many settlers who opened up a frontier of fertile farming in Niagara. Now, two centuries later, The Hare Wine Co. celebrates the noble and historical bounty of not only their property but also that of the entire region.

When you step into The Hare Wine Co., you’re walking into an old style British castle made from 200-year-old bricks and 150-year-old barn board. The winery features 4 tiers of wine, with this idea in mind they’ve branded the Jack Rabbit Series, Crown Land Series, Frontier Collection and their Noble Collection. 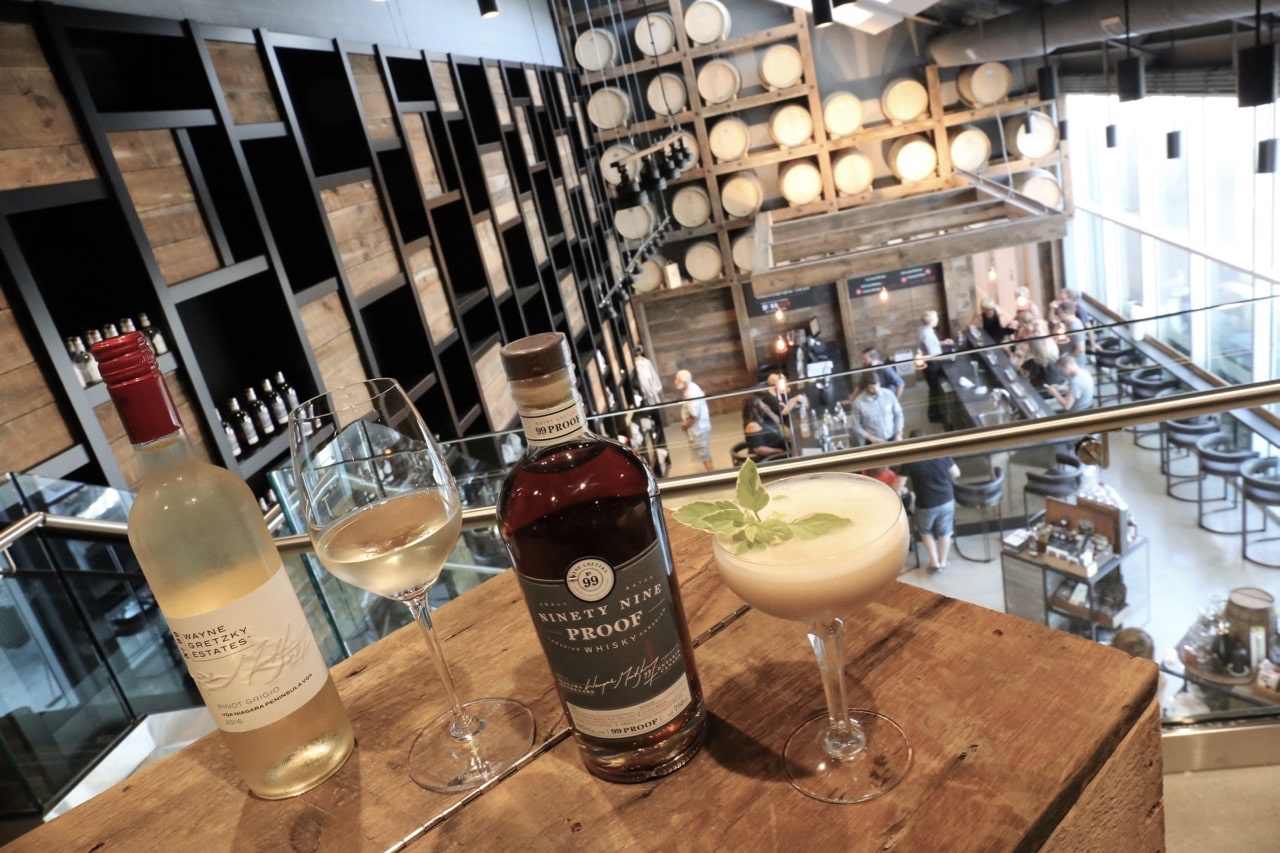 Stepping into Wayne Gretzky’s new sweet sipping temple feels like you’re walking into the famous Canadian hockey players very own family room. Upon entering you are greeted with never before published photographs of Wayne and his family. As you skip up the stairs to the wine bar you’ll notice Wayne’s hockey photos which hang chronologically leading you to a large tasting room with both a stand-up bar as well as sofa and coffee tables for seated service. The 23,000-square foot facility is the first of its kind in the region, featuring both wine and distilling production. The summer water feature next to the Great Lawn will become an ice rink in winter, a perfect spot to sip no matter the season. Whether you are in the mood for Wayne’s fave Pinot Grigio or whisky muddled cocktail, Wayne Gretzky Estates Winery is certain to be a must-visit for Toronto whisky and wine fans looking to see what’s new in Niagara-on-the-Lake.