A mini bus picked me up at my hotel and drove me over to a pot hole filled parking lot where I hopped on a Super VIP bus heading to Phnom Penh. It was far from super and certainly not for very important people. This tin can on wheels spent the next six hours chugging through Cambodia’s flat agricultural heart. From Siem Reap to downtown Phnom Penh we stayed on the same two lane paved road the entire way. For years tourists had to take a slow, loud and smelly boat up the river from Phnom Penh to reach the Angkor Temples. The road has only recently been paved in the last few years which has made transit easier for tourists and locals.

I stared out the window for hours at vast, green, rice paddy fields dotted with tall palm trees. Phnom Penh’s main street is lined by farmer’s houses which are built on stilts and sit over muddy ponds which stretch to the road and often feature floating lily and lotus flowers. Many of these farms have large a pile of yellow hay sitting out front which feeds the many wandering cows from the outlying farmlands. Poor local children ran after our bus along the way. 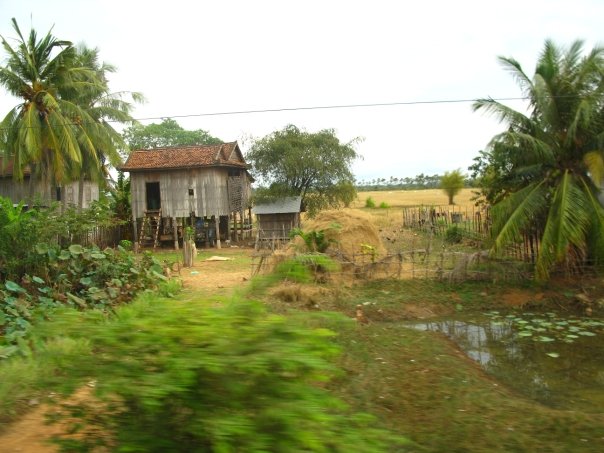 As soon as I got off the bus I was hounded by screaming moped and taxi drivers. I actually couldn’t get off the bus as they all had their arms outstretched and were blocking the doorway. I screamed at the top of my lungs, “I have a hotel reservation!” and was soon given space to squeeze through the crowd. I found my large pack and strapped it onto my back and headed towards the river. I spent the next ten minutes telling a little man to piss off after he refused to leave me alone. “Sir beautiful hotel for you, you are so beautiful and so is this hotel, for you it is beautiful!”

My bus had arrived an hour late and I was supposed to meet my two friends from Dubai as we were going to share a hotel together. I pulled out my laptop on the curb, directly in front of a posh café and checked my messages, wrote down the hotel directions and soon found myself knocking on their door. I dropped my bags and told them of my tumultuous journey. After all three of us had relaxed we hopped out onto the street in search of dinner. We had to walk down several back alleys and small side streets in the pitch black of night. I will never forget passing by the municipal garbage truck. Two boys who couldn’t be older than 13 years old were scooping up garbage off the street with their bare hands. All Cambodians wear a lovely smile but their eyes look tired and torn. 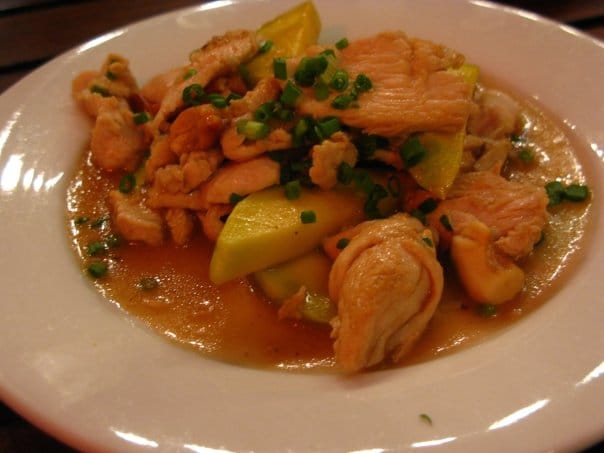 Friends Restaurant is an amazing little eatery which doubles as an NGO and community outreach centre. All of the profits of the restaurant go directly to underprivileged families in the city. The restaurant has over 200 local employees, all of which used to be street children. They are sent through three levels of hospitality training and once they reach level three they are then allowed to serve and cook at the restaurant. There is nothing I enjoy more than eating for a good cause. The menu at Friends is extensive and features a varied international menu. 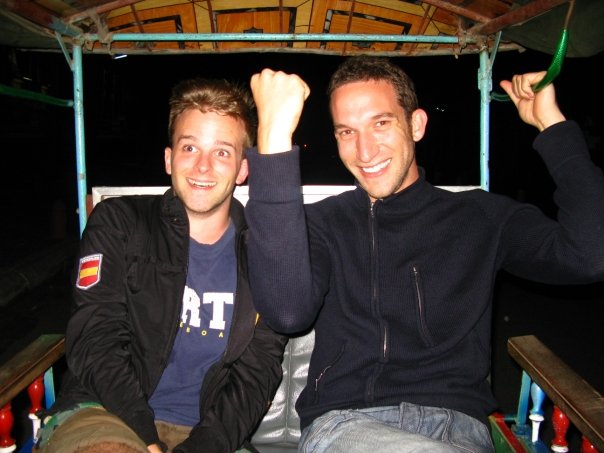 Everyone who has ever been to Phnom Phen knows that this city is rather depressing. The capitals two biggest tourist attractions, The Killing Fields and Security Prison S-21 (also known as the Tuol Sleng Museum) both tell the story of the brutal Pol Pot regime and the resulting genocide of 30 percent of the countries people. The Killing Fields is a short drive out of the city so we hired a proper air conditioned taxi in order to avoid the dusty Tuk Tuk filled roads.

Rising above 129 mass graves in the Killing Fields of Choeung Ek is a blinding white stupa that serves as a memorial to the approximately 17,000 men, women and children who were executed here by the Khmer Rouge between mid 1975 and December 1978. Encased inside the stupa are almost 9000 human skulls found during excavations here in 1980. Many of these skulls still bear witness to the fact that they were bludgeoned to death for the sake of saving precious bullets. Hearing the sounds of joyful children playing at nearby schools while spotting human bone and clothing poking up from the churned ground reinforces the contradiction of Cambodia today. The memorial is a quiet place, the wind blew lightly through the trees as we wandered around a quiet pond and through several grass covered graves. Here, one can’t help but feel empty and cold in the middle of a hot day. 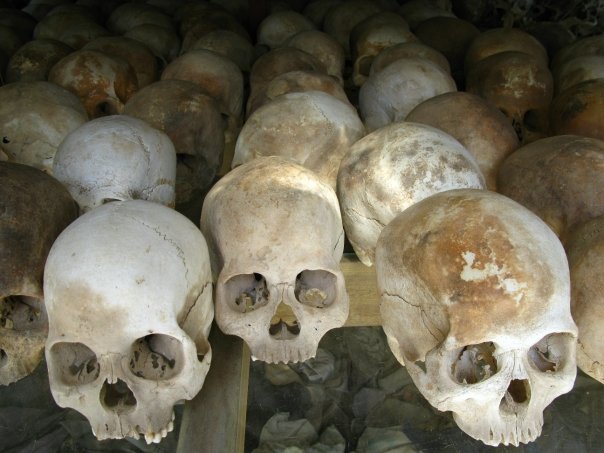 We hopped back in our taxi and were dropped off at the National Museum where we spent the next hour slowly drifting through the open concept space. In the inner courtyard of the museum is a large outdoor lily pond where I spent several minutes staring into its reflection of the sky above. The museum contains a huge collection of Khmer relics many of which are from the Temples of Angkor. One really doesn’t need to visit the museum if they have already spent a few days at Angkor Wat, but it was a great spot to hide in the shade for an hour during the hottest part of the day. 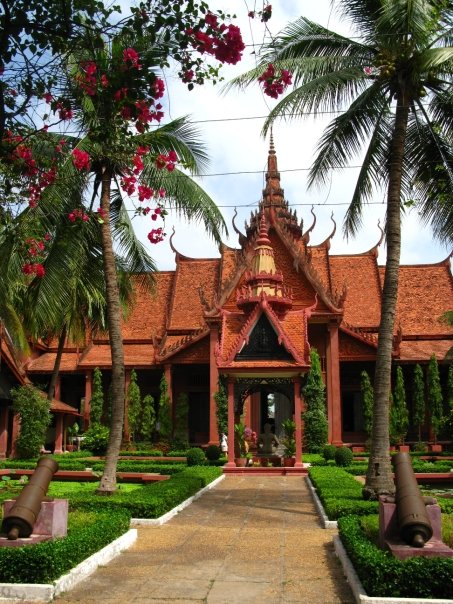 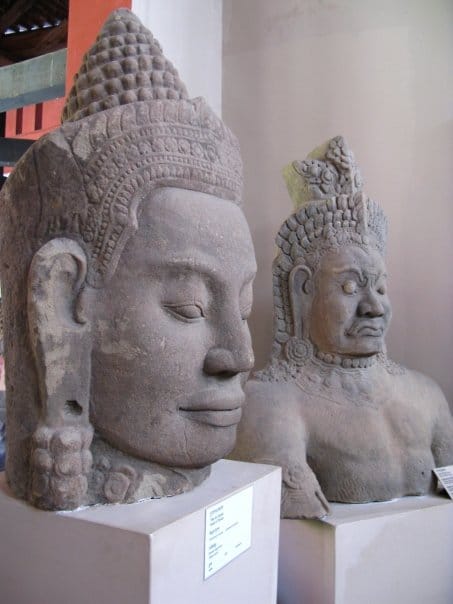 From the museum we walked over to the city’s infamous Happy Herb Pizza Restaurant which serves up pies sprinkled with marijuana. There are several knock off Happy Restaurants throughout Cambodia and Laos but I wanted to make sure I went to the original restaurant which started it all. I ordered a Happy Pepperoni Pizza and munched away. The pizza looked as though it had been dusted with oregano but only the trained eye could spot the “other herb.” 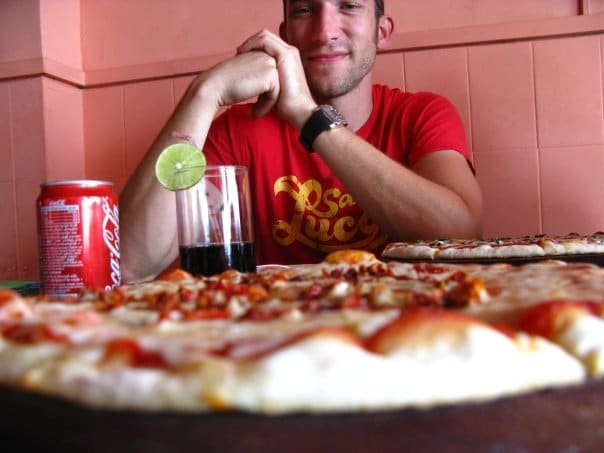 I ran back to my Tuk Tuk and drove across the city to S-21, The Tuol Sleng Museum. The museum is an educational and eerie walk through the very rooms where thousands of innocent men and woman were tortured. While walking down the corridors it’s not hard to imagine the buildings original origins as the Tuol Svay Prey High School. Touring through former classrooms shatters any illusion of normalcy. A single rusty bed and a disturbingly gruesome black and white photo are all that adorn the unthinkable horrors that happened here.

In 1975 Pol Pot’s security forces turned the school into Security Prison 21 (S-21), the largest centre of detention and torture in the country. Almost everyone held here was later executed at the Killing Fields of Choeung Ek. Detainees who died during torture were buried in mass graves inside the prison grounds. During the first part of 1977, S-21 claimed a terrifying average of 100 victims per day. Tuol Sleng demonstrates the darkest side of the human spirit that lurks within us all. It is not for the squeamish, but a visit here is instrumental in understanding Cambodia’s past and present. 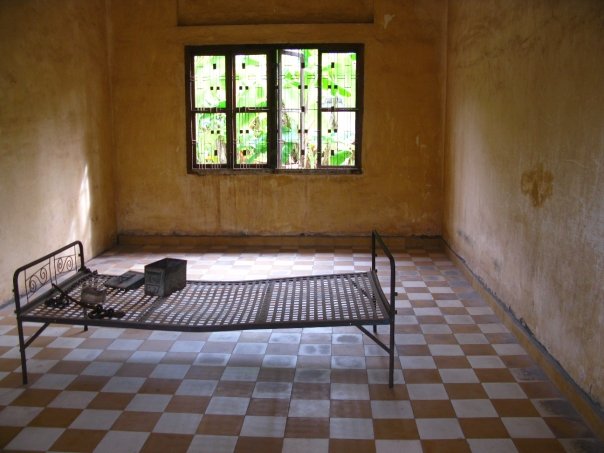 Looking up at many of the foreign faces at the museum one feels a rather depressed mood in the air. It’s impossible not to walk around speechless. I quietly walked back to my Tuk Tuk and sat in the back seat. My two young drivers looked up at me and said, “It is so sad, yes?” I responded, “yes it is so terrible what happened here.” Staring up at my two 18 year old drivers, realizing the three of us had somber faces, I understood how painful it must be to grow up in Cambodia. These two boys spend every day driving around tourists who come to see the torture which their parents and grandparents endured. 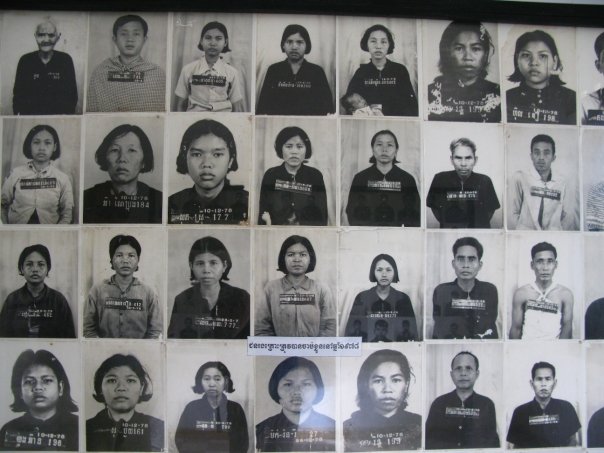 From the museum my drivers dropped me off at the entrance of the Royal Palace and Silver Pagoda. With its classic Khmer roofs and ornate gilding, the Royal Palace dominates the diminutive local skyline of Phnom Penh. Hidden away behind protective walls and beneath the shadows of striking ceremonial buildings, it’s an oasis of calm, with lush gardens and leafy heavens. As it’s the official residence of King Sihamoni, areas of the massive compound are closed to the public. Within the palace interior is the extravagant Silver Pagoda, the floor of which is covered with five tons of gleaming silver. You can sneak a peek at some of the 5000 tiles near the entrance. Rivalling the floor, an extraordinary Baccarat-crystal Buddha sits atop an impressive gilded pedestal. Adding to the lavish mix is a life-sized solid-gold Buddha, which weighs 90kg and is adorned with 2086 diamonds, the largest weighing in at 25 carats. 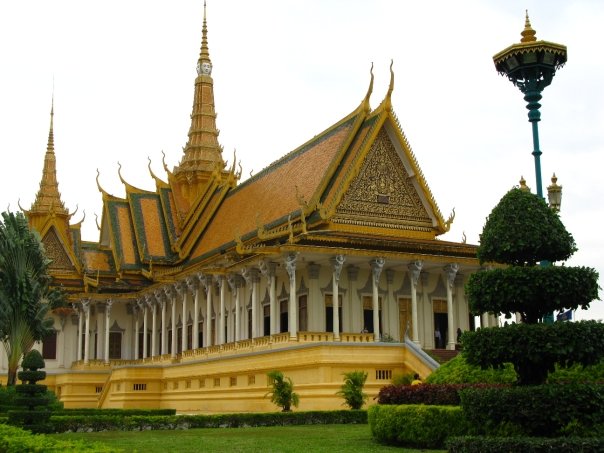 I walked up a tiny path and reached a small set of stairs which led to the entrance of a small temple where several tourists seemed to be waiting in line. I poked my head inside and found a small Buddha shrine surrounded by glowing neon lights. An old man with bowed legs sat on the floor while a foreign woman sat opposite him. He instructed her to put a deck of wooden cards over her head and she then inserted a small pin. He looked at the top card, closed his eyes and spoke to the English interpreter who then revealed her fortune. I found it rather funny as the man basically said, “Your life is hard right now but it will get better.” What a lovely fortune, five dollars later, I could have told her that for free! 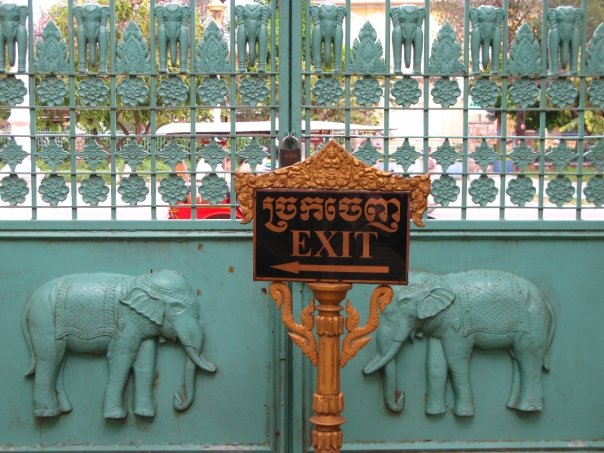