As soon as I stepped into my suite at the glitzy Hotel Europe in Sarajevo I did what most gay men traveling on the road tend to do: I logged onto Grindr to see what the local men have to offer. It’s my attempt at finding Prince Charming and as a travel writer, at this point I’ve come to believe my soul mate is more likely to be in Timbuktu than on the streets of Toronto.

I’ve been traveling non-stop since I graduated university in 2007, visiting 2-3 destinations a month, over 80 countries conquered in my passport. With the advent of Grindr and other gay social apps life on the road for gay men suddenly became a bit more bearable for those adventuring on the solo. Grindr has helped me connect with local gays (and the traveling variety) creating a collection of memorable moments: that Brit I enjoyed a beer with on the beach in Bodrum Turkey, an impromptu date with a bearded hipster in Portland and the choir of gay men I interviewed at a posh cafe in St Petersburg Russia days before Madonna condemned the city’s recent homophobic legislation.

I was about to embark on a week-long escorted tour of Bosnia and Croatia’s Dalmatian Coast, eager to explore a corner of Europe largely undiscovered by tourist. Over the next week I’d find myself sipping champagne in ancient medieval palaces, slurping local brew on a sunset cruise and shooting spiced grappa on an oyster farm.

Feeling a bit jet lagged I lay down on my bed and scrolled though Sarajevo’s Grindr community. I’m shocked when I realize there are only five gents from Bosnia online, with the remainder chiming in from neighbouring Serbia and Croatia. It’s obvious that connecting with a local gay man in the Balkans is going to be trickier than I thought. Like a needle in a haystack. In Sarajevo I chatted with a handsome 27 year old gent for some time who had planned to meet me one evening after I was finished dinner but ended up as a no show. He tried to apologize the following morning as I’m indulging in a road trip of rural Bosnia but I wasn’t having any of it. I learned the gays in Bosnia are flakier than a pie crust.

Our final stop in Bosnia before arriving in Croatia was the UNESCO World Heritage city of Mostar, famed for its medieval Old Bridge which stretches across a roaring river. The petite town is Bosnia’s top tourist attraction, a popular stop which welcomes the hoards on holiday for a few hours each day. I’m here for no more than 3 hours and find one friendly local gay man who immediately asks me if I need a tour guide. I tell him my visit to Mostar is a whirlwind lickity split stop to which he responds, “I’m the only gay that lives in this village. Tourists from all over the world visit each day but rarely do they pay for a hotel night here. I’ve found the easiest way for me to meet gay visitors here is by offering them a private tour of the town. In the summer I make a decent income connecting with gay tourists on Grindr, the app has opened up an entirely new means to making a living.”

I spend the next week in Croatia chatting with a collection of blank, obscured and torso-centric profiles. Several men claim my profile is a fake simply because I’m willing to show my face up front. I find one rather open gent who lives in Dubrovnik and is rather saucy saying, “There are no gay bars here. Gay men live in fear of being exposed.” I had over 48 hours to adventure through the walled medieval city of Dubrovnik and was hopeful I’d find time to meet him for a pint. I’d learned from past failed attempts to be rather direct and to that point planned to meet him one afternoon at 3pm for a beer at my hotel’s lobby lounge. He was a no show (another flaky pastry) who apologized the following day while I found myself sitting overlooking the tarmac at Frankfurt Airport. 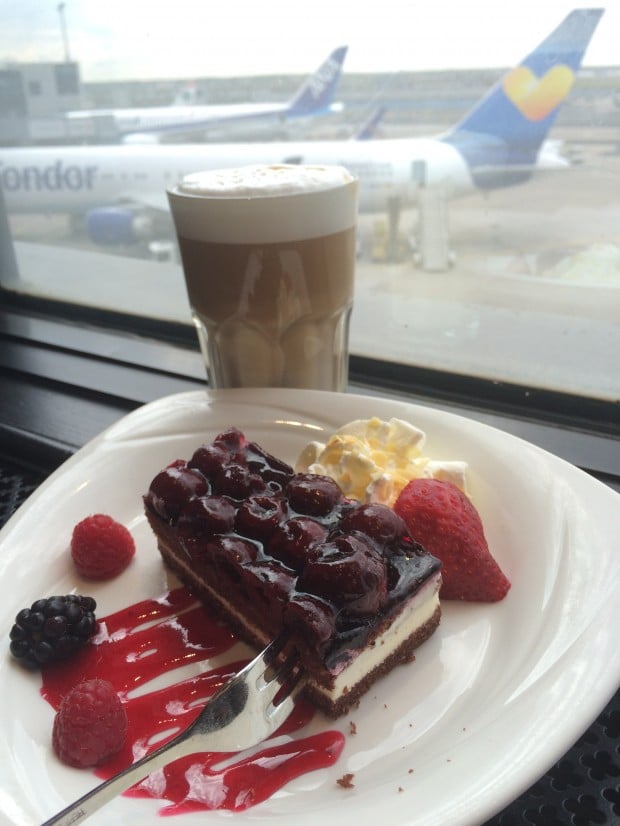 I had to be up at 3am that morning for an early morning flight so when I arrived at the Frankfurt Airport shortly before 8am to discover my connecting flight had been delayed to 6pm I was one unhappy zombie. I stood with a stone face, wondering what on earth I was going to do for an entire business day trapped in an airport. I was hungry so decided to throw myself a pity party at the airports German restaurant Kuffler & Bucher. I grabbed a primo seat by the window which offered fabulous views overlooking the tarmac and spent the next hour nibbling on booze soaked Black Forest Cake and sipping on a massive, frothy latte.

A lightbulb suddenly blinked over my head. I grabbed my phone, hooked myself up to the airports free WIFI and logged on to Grindr. The investigative journalist from within suddenly found a spark of hope at one of Europe’s busiest airports. While scrolling through a fine selection of transient gays I thought to myself, “if I’m stuck here for 8 hours I’m going to treat this misadventure as a glass half full.” In a rather hilarious turn of events I enjoyed a wildly memorable day at the Frankfurt Airport after switching my profile details to “Canadian Journalist stuck at the airport until 6pm at Kuffler & Bucher restaurant. By the window. The guy with the manbun. Come join me for a drink!” 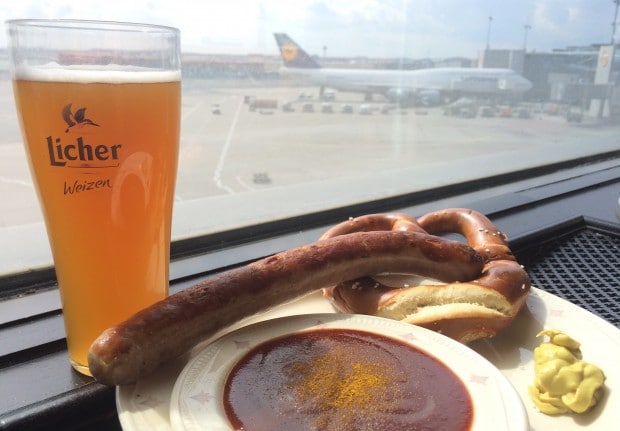 That day I would meet with six men, total strangers, each coming from a totally different walk of life but connected via our sexual orientation, boredom, curiosity and hunger pangs. I think my server was taken entirely off guard as during his shift he regularly had gay men popping by my table to order a pint or cup of coffee. I let him know I’d be using the table as an office that day and he just raised his hands and walked away with a smirk on his face.

I first chatted with a handsome gent from Frankfurt who works at the Lufthansa First Class Lounge. After wooing him with words I tried to encourage him to let me into the lounge, a request to which he responded “Do you want me to lose my job?” After an hour of chatting with randoms I had over ten transient gays chirping at me via the app to find out what I was “looking for.” I made it clear a rough quickie in the nearby wheelchair accessible bathroom was out of the question and soon welcomed my first guest at the table, a 50 year old British accountant who spent 30 minutes sipping an espresso with me before he ran to board his flight to London.

By midday I had four gents sitting at the table sipping hefeweizen while devouring plump brawtwurst, rindswurst, nurnberger, frankfurter and weibwurst. It was literally a sausage party, filled with refreshing conversation from a sexy Spanish pilot, dorky college student from Philadelphia, model from Berlin and Swedish doctor. As massive jumbo jets taxied to and fro I couldn’t help but joyously blurt, “this is by far the best time I’ve ever spent stranded at an airport.”