Stepping into the Renaissance Montreal feels as though you’ve passed into an extension of the city herself. Inside, tall industrial ceilings overlook seating nooks fit with blown-up desk lamps and swings (naturally), while street art seems to beckon from every which way. What with Montreal’s vibrance and artistic nature, the just-opened hotel is very apropos for such a town.

This swishy 142-roomer aims to capture the spirit of wanderlust (cue Björk’s magnificent tune) by appealing to the business traveller who has one foot in the office, and the other primed for adventure. Outside, it’s all Art Deco grandeur, while inside the space feels super modern. A major draw for tourists and locals alike is the rooftop terrace which offers incredible panoramic views. Did I mention it’s the only one in downtown Montreal that’s heated? Well it is. On the opening night (May 10, 2016) celeb DJs Brendan Fallis and Evalicious spun sets while guests swilled white sangria under a tranquil sky, cementing the hotel’s place among the city’s see-and-be-seen set. 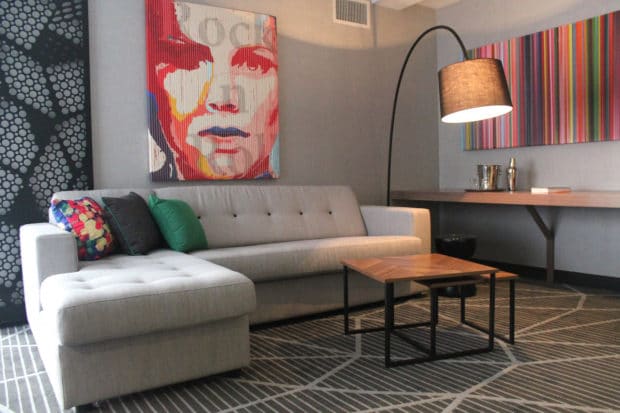 Book yourself into one of their top suites; the rooms are just the ticket for design snobs. Located on the second floor, my nifty space gave me a view down to the street’s hubbub — though not a pinch of it could be heard. The den area was lit up with pops of cheery colour and art (even behind the coffeemaker nook!) while the bedroom was completely zen, finished with a graffiti tag headboard, if you will. With the addition of two huge flat screen TVs and a rainfall shower head, it’s the perfect place to relax and regroup after a day of travel. 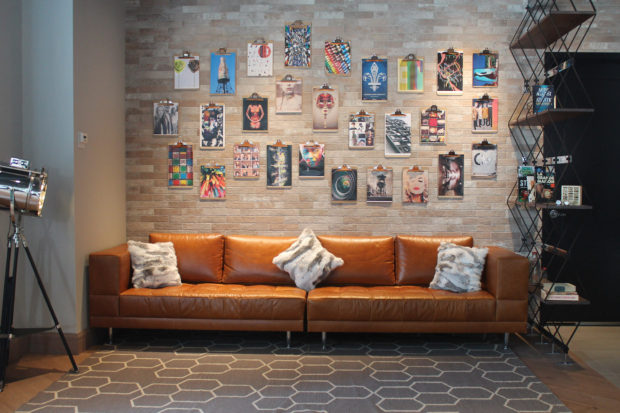 The Renaissance is positively bursting with art. Look for works from Alexandre Veilleux in the lobby as well as tons more scattered throughout the hotel. Don’t forget to check out the walls behind you as you wait for the elevator; graffiti artist Scaner has created an amazing mural that looks as though the wall has been torn away to reveal colourful graffiti. The main floor bathrooms have each been given their own stamp of life. (My fave is the mirrored number.) Finally, head to the roof to check out one of my top picks: a girl snapping a photo of herself. 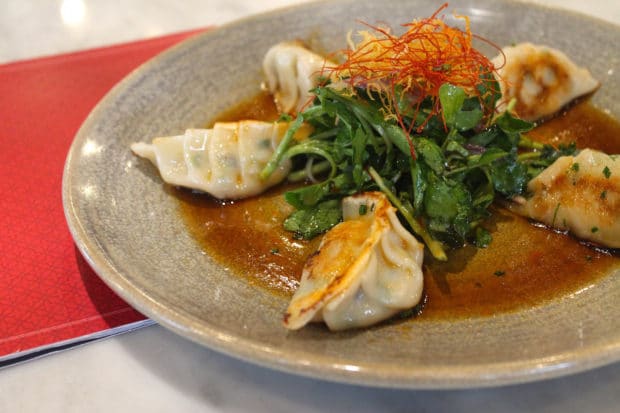 For those looking for a bite, East, the restaurant located adjacent to the hotel lobby, turns out Pan Asian cuisine with decor to match. Wrought iron dividers and dark woods set the tone, with the golden bar taking centre stage in the space. A creative menu mines different countries for their top flavour pairings; think dim sum from China or pad Thai from Thailand. A top contender for favourite is the Yusheng salad for two, boasting a grand total of 32 ingredients. (I was told the key is to stir the salad as many times to get the max effect.) Another top dish is the miso marinated black cod which sits atop a bed of soba noodles along with lightly steamed bok choy. From the dim sum menu, picks include the tori gyoza, crescent moons stuffed with chicken, carrot, ’shrooms and spiked with ginger. 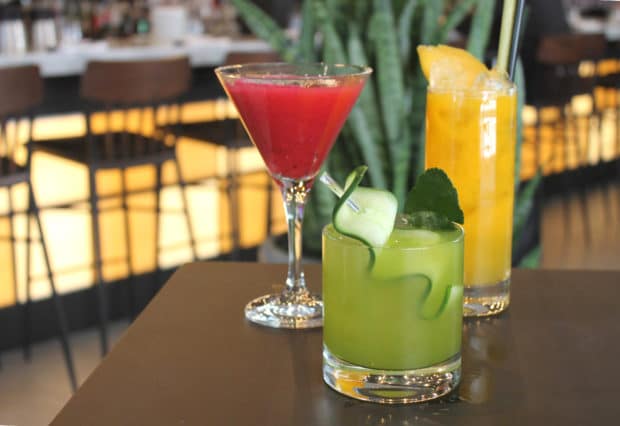 Noted MTL entrepreneur Lawrence Picard — of the renowned Nectar Bar Design & Mixologie — has added his flair to the cocktail menu. His tipples are very in keeping with the hotel’s lively decor and atmosphere, with sunny fruit-forward flavour profiles. I sipped on the Hai Pai Fizz, which saw Appleton rum marry some mango and ginger beer, and the Green Lantern, a rather refreshing tipple matching Hendrick’s gin with shochu, cuke and coriander. I fell for the fuchsia-hued Asian Boulevard most of all; 10-year-old Glenmorangie met Campari, Martini Rosso, sake and kumquat, resulting in a fruity libation with plenty of depth. 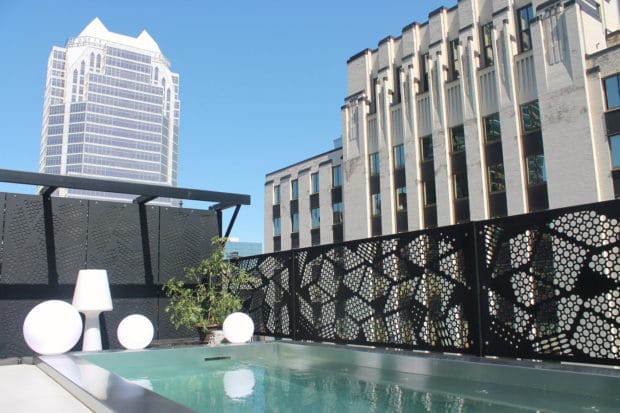 Views from the Top

No visit to the Renaissance is complete unless you’ve hopped up to the rooftop where you can take in an incredible panoramic view of MTL. There’s also a pool for dipping into if you get the urge, and, come sundown, it’s the city’s only place to head for a heated — and covered — rooftop terrace. With two levels, it’s the perfect place to step away from the city life and breathe. 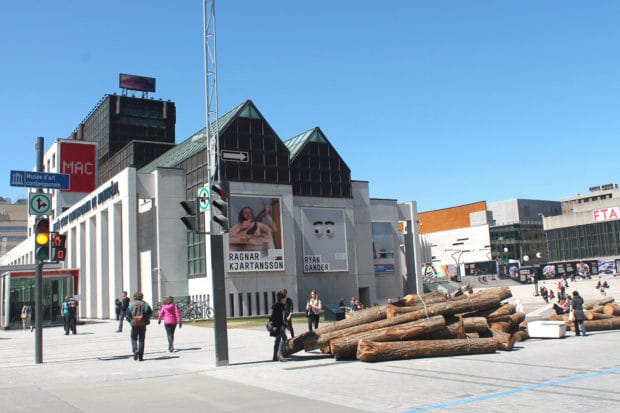 Due to it’s super central location, the Renaissance Montreal is within spitting distance of anything your heart desires. With the help of a knowledgeable Navigator (the hotel’s super personable tour guides), you’ll be set in the right direction in no time.

Shoppers can take in all the boutiques on Rue Sainte-Catherine as well as some slightly further afield. If you’ve the time, I’d recommend skipping over to Rue Saint Paul, just south of the Basilique Notre-Dame — a perfectly picturesque area of Vieux Montreal to explore. Those with more avant garde inclinations must head to Denis Gagnon’s atelier. He tends to stick to a stark palette of black and white and is a local design icon. (Naturally he showed up at the opening night soirée.)

There are also a number of small art galleries you can pop your head into for a cheap taste of the arts. Go to Inuit Boréal for Inuit or Le Royer for more pop pieces (think whimsical blown-up lollipops from artist Desire Obtain Cherish). Grab an Americano at Olives et gourmando, a popular midday destination, and then head back up to the hotel ’hood, where the Musée d’art contemporain de Montréal is a must-visit.

All in all, the Renaissance Montreal impresses with its innovative decor, it’s super central location and it’s spirit. Just the ticket for a getaway.

A Love Letter to Montreal

Canada’s Only W Hotel is in Montreal